Nepal is an extraordinary country that is blessed with countless outdoor adventures. The mighty, jaw-dropping Himalayas seem to get all of the attention and glory. Being home to the planet’s highest and most beautiful peaks, it’s easy to see why.

I’ll be honest, it was the world renowned mountain trekking that lured me to Nepal. But I quickly learned that there is so much more to the tiny nation that is mercifully wedged between two beasts. 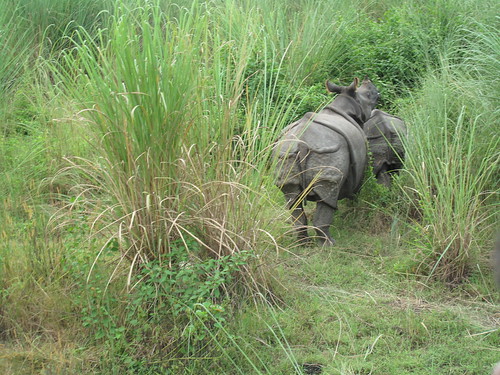 Chitwan National Park, located in the Gangetic flat lands of the Terai, offers adventure seekers and eco-tourists a number of authentic experiences. There was a particular adventure that caught my eye – an elephant safari through thick bush in search of the Asian One-horned Rhinoceros (aka the Indian Rhinoceros) and the elusive Bengal Tiger.

It was one of those truly rare experience that I simply could not pass on.

Having previously searched for big cats in the jungles of Costa Rica, Mexico and the Amazon Basin, I had low expectations of actually spotting a tiger. They travel alone and are clever and quick. 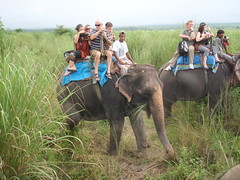 However, Chitwan boasts a healthy population of clumsy Rhinos with over 400 accounted for in 2008. Although there was no guarantee, the odds were definitely in our favor.

There are several tour operators inside the park but trips can be booked ahead of time in Kathmandu or Pokhara. As always, it pays to do your homework first and find an operator that treats its elephants well.

You would be wise to book a package deal that includes transportation transfers, accommodation and other activities (elephant bathing, jungle trekking, dugout canoeing and bird watching to name a few).

We used a company named Outdoor Himalayan Treks and booked a combo tour that included river rafting the Trisuli and trekking the ‘mini-Annapurna Circuit’. They were fine, but very basic.

Each elephant is equipped to carry four people plus guide. The wooden saddles are definitely not known for comfort but I wasn’t there for luxury loafing. Our excited team set off through the lush forest. We were joined by three other groups that eventually split up once we hit the open terrain. 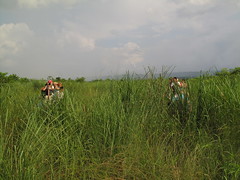 The Terai Valley grasslands are remarkable, with tall grass reaching as high as four meters in some places. The elephants slowing stomped their way through the thick floodplains. At times the grass was so tall that we lost our companions.

An eerie sense of isolation and seclusion was upon us.

I had spoken to another group that had completed the same safari the day before. They returned to the jungle lodge unsuccessful in their hunt for tigers and rhinos. After 45 minutes of swaying back and forth I started to get the feeling that our team was destined for a similar fate.

Suddenly the elephant in front of us started to increase its pace. The Nepali guides shouted at one another and whipped their elephants. My stomach filled with butterflies.

The chase was on!

The elephants picked up speed and within moments had managed to corner its prey in a cluster of tall weeds and grass. The grass shook vigorously. The dinosaur-looking mammal let out a loud snort and made its official appearance for its eager, photo-snapping audience. But this rhino had a little surprise for us… this rhino was not alone! 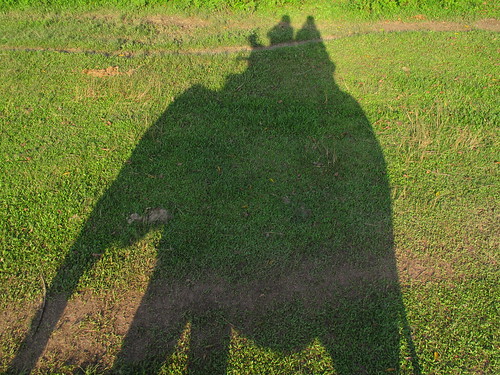 We had the unbelievable fortune of spotting two rhinos. It appeared to be a mother and child, although the child was almost full grown. It then dawned on me, “don’t mothers get very hostile and protective when they feel their young is being threatened?” 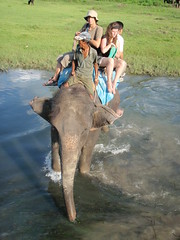 Almost on cue, the rhino let out another aggressive grunt and circled.  The pair were getting restless and didn’t like their new found fame. They frantically turned left and right, desperately looking for an opening to escape.

Without warning, a dominant elephant with long, sharp tusks let out a fierce blast from its trunk and started rushing towards the rhino – the tourists on its back grabbed on tight, unsure whether they should laugh or cry. The powerful elephant was letting the anxious rhinos know that he was still the king of this jungle.

The rhinos finally found an opening and bolted. The elephants and guides gave chase. It was quite a rush but eventually the guides let the rhinos escape into the jungle wilderness.

Our guide assured us that this game of cat and mouse was very normal. Well, maybe in his world.  But to all of the travelers rocking back and forth on the back of an elephant, this was a once in a lifetime thrill not soon forgotten.

Have you been on an Elephant Safari? Where was it, and what did you see?
Share your story in the comments section below!