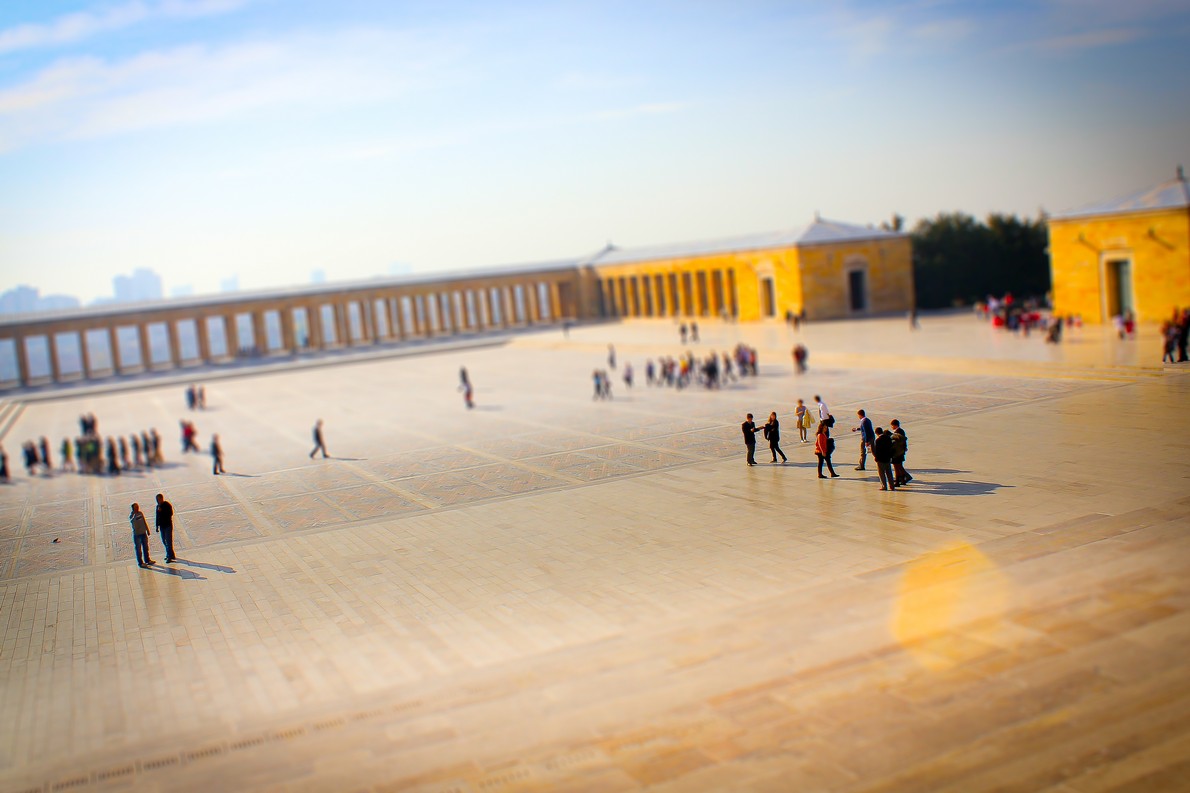 Although Ankara, the capital city of Turkey, is not blessed with the stunning landscapes of Cappadocia or the magnificent historical architecture in Istanbul, it does have the title of being home to one of the world’s most impressive mausoleums.

I must confess that prior to my trip to Central Turkey I had little knowledge about Mustafa Kemal Atatürk, the founder and first president of the Republic of Turkey and the victorious leader of the Turkish War of Independence. Being a foreigner, it’s difficult to fully appreciate the impact that Mustafa Kemal Atatürk has on the people of modern Turkey. One quickly realizes that Atatürk is as famous as it gets in Turkey.

The magnitude of Atatürk’s legacy is undeniable when you first approach the lavish memorial and get a sense of its enormity and dominance. It reminded me of Ho Chi Minh’s Mausoleum in Hanoi, Vietnam and sends a similar message to its visitors.

The mausoleum looks a lot like the Parthenon in Athens, with tall columns at its entrance. As the video illustrates, there were moments when horns blasted over the speakers and all of the visitors stopped to pay tribute to the Father of Turkey.

I’m not sure if this was a daily occurrence or if it was because I had visited the massive memorial in November, a few days before the anniversary of Atatürk’s death. 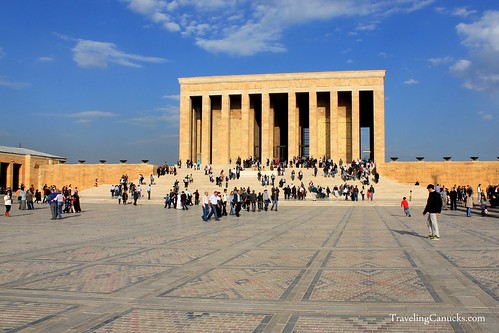 Frontal view of Anitkabir, which means “memorial tomb”.
How important do you have to be to get one of these?! 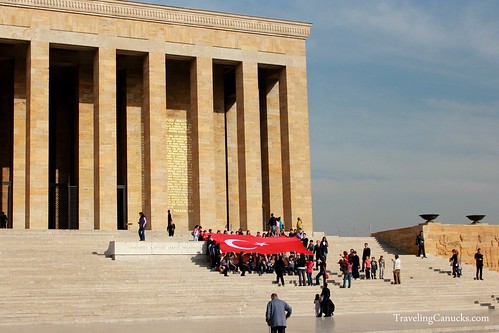 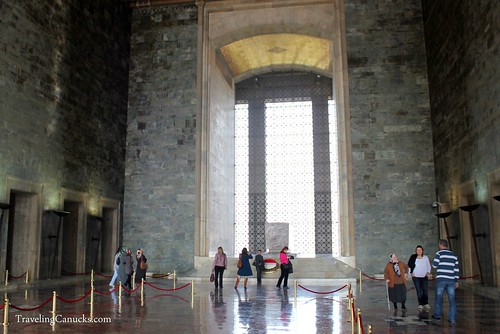 Inside the mausoleum, Ataturk’s sarcophagus is in the centre (above the red wreath) 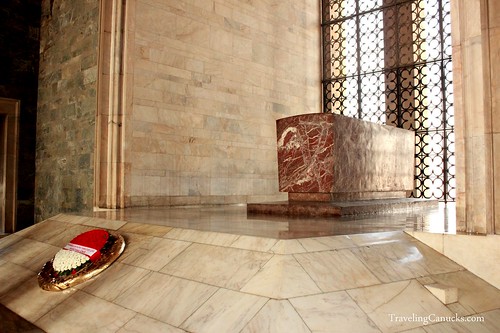 The sarcophagus of Atatürk, the Father of the Republic of Turkey 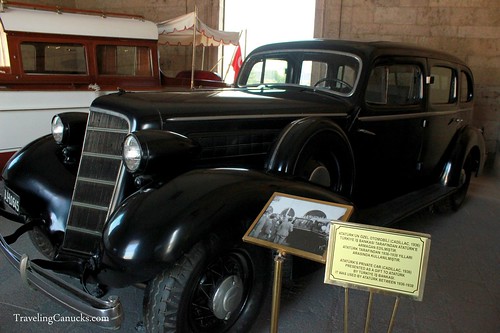 Atatürk’s Cadillac on display with his personal boat 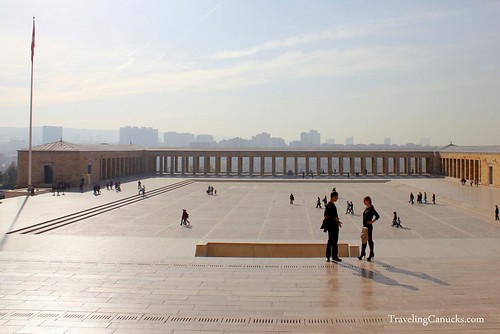 Views of the ceremony grounds from the exit of the mausoleum,
standing at the top of the stairs in front of the large columns 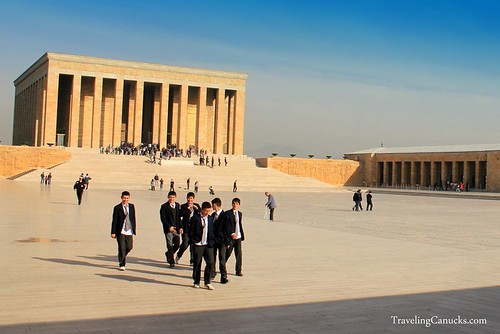 There were hundreds of students visiting the mausoleum during school hours,
a testiment to the importance of Atatürk’s legacy 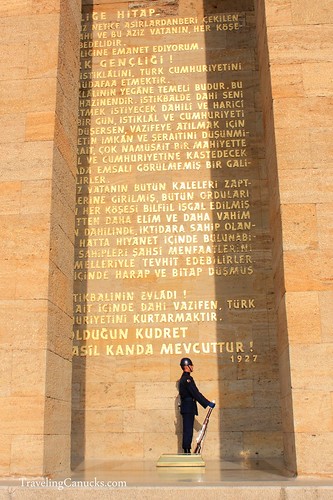 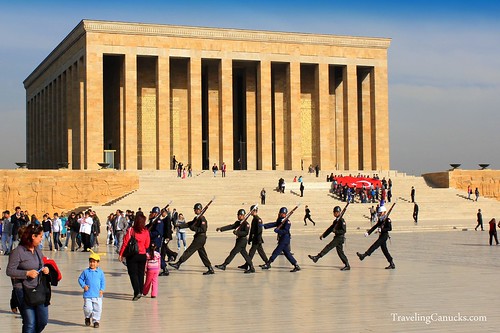 Turkish Soldiers march with authority through the ceremony ground 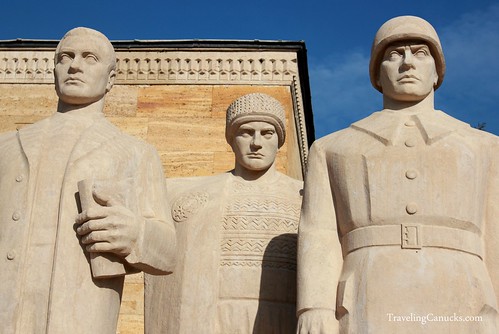 Statues of three men located in front of the Freedom Tower,
representing a Turkish intellectual (left), a peasant and a Turkish soldier (right) 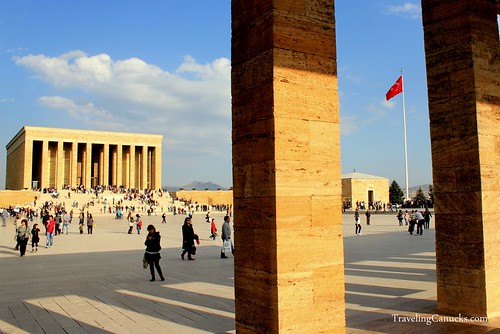 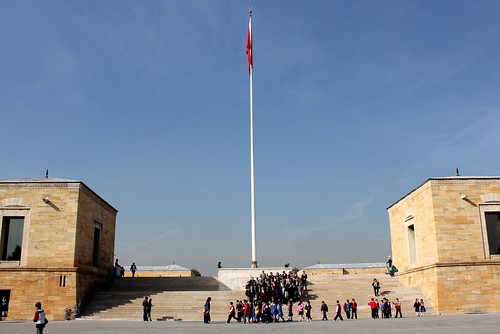 The entrance to Anıtkabir, the remarkable Mausoleum of Mustafa Kemal Atatürk
Located in prime real estate in the centre of Ankara, the capital city of Turkey

It’s hard to not be impressed by this extravagant memorial. On the 69th anniversary of his death, over 550,000 people visited the mausoleum to pay respect to the Father of Modern Turkey. Think about that for a moment!

What is the most impressive memorial you’ve ever visited?
Share your stories in the comments section below!