Well, it’s about that time again! Time for the next instalment of our popular series on memorable moments drinking beer around the world.

The beer-tastic series continues with its 8th edition, serving up ten more unforgettable moments from around the world. 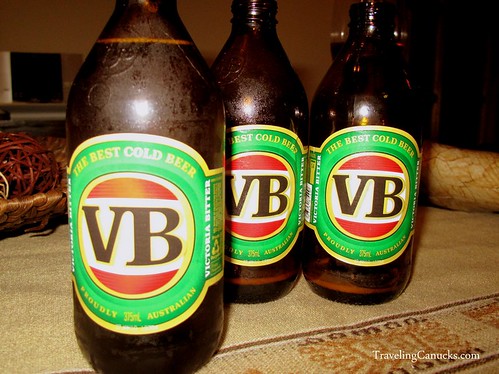 Anyone that’s traveled to Australia has likely consumed a bottle of its popular VB beer. When we were in Peru hiking the Inca Trail to Machu Picchu we became friends with an Australian couple from Newcastle who gave us an open invitation to stay with them if we were ever in the land downunder. Of course we had to take them up on their offer when we passed through Newcastle on our campervan road trip from Cairns to Sydney. These cold beverages were enjoyed while reminiscing about our adventures in Peru a few months earlier.

The beer verdict – Light lager, slightly bitter but not very flavourful, nothing to get excited about but the bottles are cool. We give it 7 out of 10 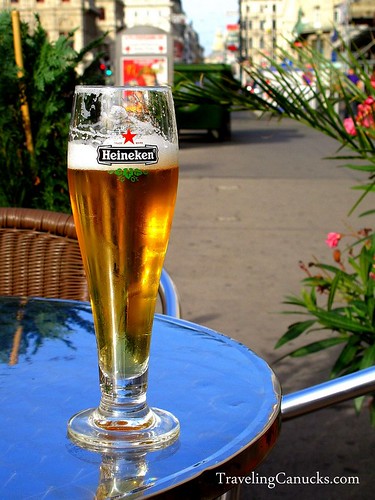 How delicious does this photo look?! After a full afternoon exploring the cobblestone streets and incredible architecture of downtown Vienna, we found this quiet patio in the heart of the city. We sat outside in the autumn sun, curiously watching people go about their daily activities. I know, I know… there are so many better beer options we could have chosen, but the daily happy hour special was 2-for-1 Heinekens. Sometimes decisions just make themselves!

The beer verdict – It’s Heineken, you know the drill. We give it the standard 7.5 out of 10 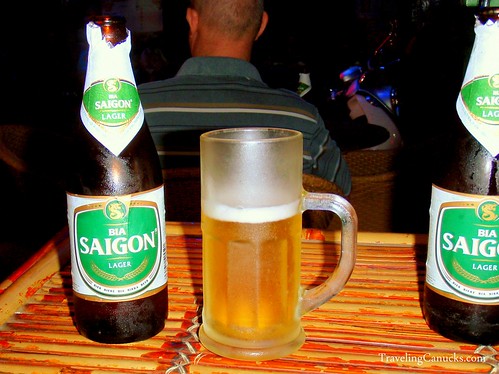 It’s no secret that we love Southeast Asia. We love the culture, we love the amazing variety of foods and we particularly love an inexpensive bottle of beer served in a frozen glass that sweats in the tropical heat. This photo was taken on our first evening spent in the backpacker district of Ho Chi Minh City. The bamboo table in the photo was later filled with Vietnamese spring rolls and deep fried frog legs, the perfect complement to another round of cold Bia Saigon.

The beer verdict – Very cold, smooth and sweet with decent body. We give it 7 out of 10 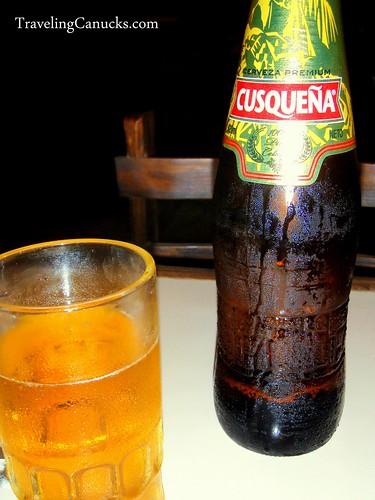 Similar to Angkor Beer in Siem Reap, Cusquena is the popular beer of choice when in Cusco, Peru. Although we enjoyed several Cusquena Cervezas during our time backpacking in Peru, this moment stands out because we had just returned from our sand boarding and dune-buggy tour of the giant sand dunes in Huacachina. The high speed dune buggy tour was one of the highlights from our travels in South America, capped by an unforgettable evening spent relaxing by the calm desert oasis.

The beer verdict – Light tasting yet malty and sweet, flavourful with decent body. It’s one of the best local beers you’ll find in South America (which is not known for its quality beer). We give it 7.5 out of 10 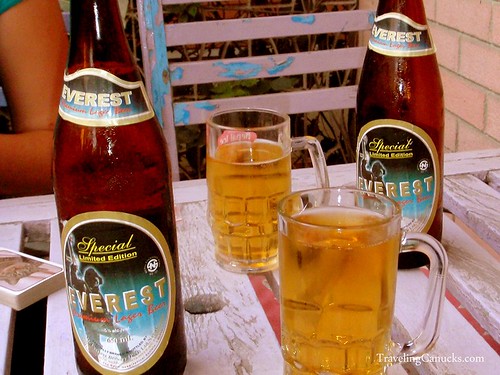 Sitting on our hotel balcony, we sampled a couple tall bottles of Nepal’s popular lager while playing a few rounds of cribbage. We had just spent the day exploring the remarkable temples of Kathmandu, connecting with the frantic city and its rich culture. Many travelers choose to skip Kathmandu, using it as a hub to find cheap holiday deals to the Himalayas. We were glad we went against the trend and dedicated a few days to Nepal’s spiritual capital city.

The beer verdict – It was served warm, somewhat flat and bitter. Not very good. We give it 5 out of 10 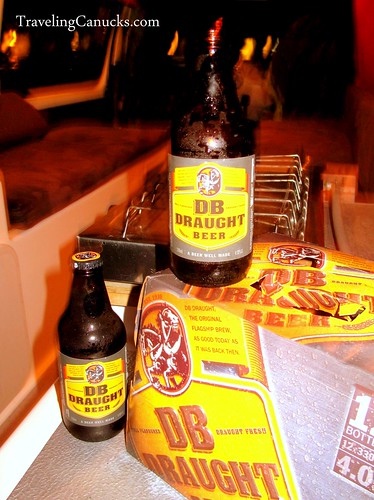 In our opinion, the best way to experience the natural beauty of New Zealand is to hire a campervan and take a road trip. We picked up the campervan in Auckland and set our sights on Rotorua, the first stop on a 17-day road trip from Auckland to Queenstown. This case of DB Draught, strategically positioned in our “kitchen”, was consumed in the presence of the unforgettable sulphuric smells that Rotorua has become famous for.

The beer verdict – Flavourful, slightly malty and smooth with clean bitterness. We give it 7 out of 10 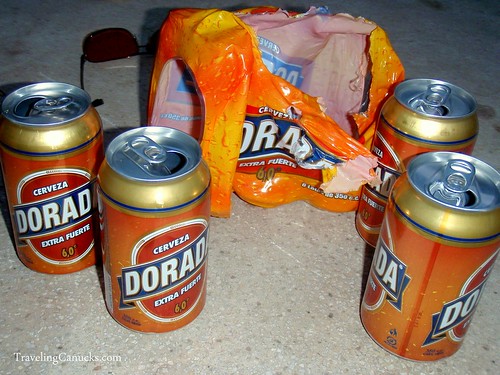 After narrowly missing our bus from Valparaiso Chile to Mendoza Argentina, we changed our plans and caught the next bus to Los Andes instead. It was a last minute decision but we were feeling adventurous that day. We had never heard of the city and knew nothing about it, except that it offered a morning bus to Mendoza.

We spent hours wandering the city streets looking for a place to sleep, with no luck. Finally, after feeling thoroughly defeated, we found a poorly visible guest house that had accommodations in our budget price range – we definitely got what we paid for!  This 6-pack was enjoyed in the guest house courtyard, the only feature about the guest house worth mentioning.

The beer verdict – Tangy with skunky aftertaste. Not good, but still beer. We give it 5 out of 10 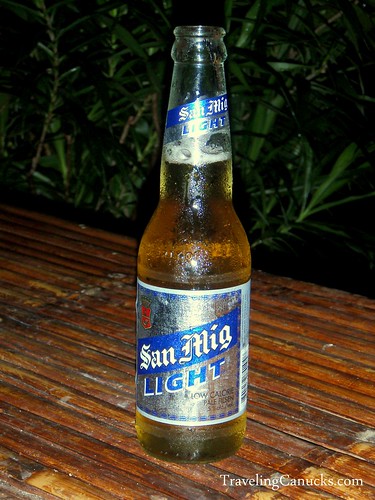 This cold bottle of San Miguel was consumed from our lazy hammock, perfectly situated on the patio of our private bungalow on Borocay’s famous White Beach. The moments spent relaxing in the hammock, reading a book while sipping on a cold beer, are some of the most memorable we’ve had from our time in the Philippines. It’s hard to top the beach bumming lifestyle that Southeast Asia has become renowned for – and we dig it!

The beer verdict – Clean and smooth, light on flavour but very easy to drink. We give it 6.5 out of 10 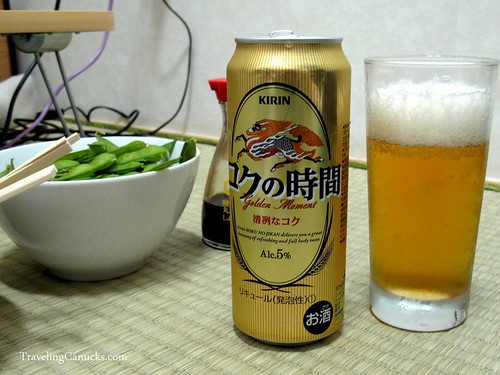 We will never forget this moment in Yokohama, Japan. Not because of the Kirin Beer or Japanese food purchased from a vending machine, but because the hotel room was without question the smallest room we have ever stayed in. The closet sized room was equipped with a kitchen and tiny television but very little else, so we ate and drank while sitting cross-legged on the bamboo covered floor. Needless to say, it was a very cozy atmosphere.

The beer verdict – Sweet and slightly bitter, great compliment to Japanese food. We give it 7 out of 10 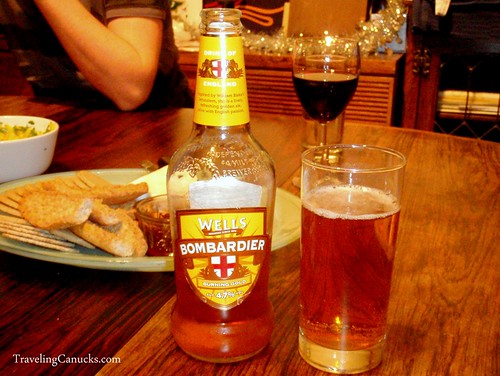 This delicious bottle of honey lager was consumed on the last night of our year long adventure around the world. We were staying in London with friends we had met while cruising the Galapagos Islands off the coast of Ecuador. The United Kingdom was in the midst of receiving one of its biggest snowstorms on record, forcing us to seek shelter indoors. It was the perfect end to an unforgettable, life changing experience.

The beer verdict – Full-bodied, flavourful and delicious. We give it 8 out of 10