The Lazy Lizard at the Split, Caye Caulker, Belize 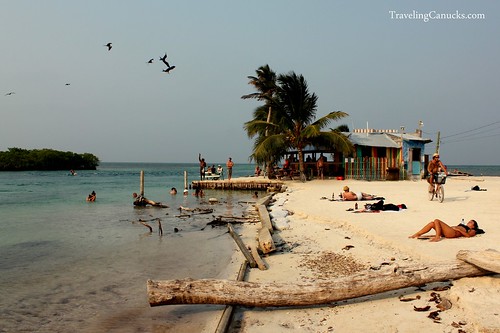 Perfectly situated at “The Split”, the Lazy Lizard is easily Caye Caulker’s favourite watering hole. Down-tempo beats blast from large speakers as travelers and residents come together over cold Belikin Beers and bright lime-green cocktails. Tanned, half-naked foreigners sprawl out on the concrete pier, periodically swimming in the shallow waters to escape from the relentless Caribbean sun.

It doesn’t have the nicest beach on the island. In fact, the beach is more like a dusty road that ends at the water’s edge. But it does provide the best spot for walk-in swimming and has become one of the island’s most popular spots to catch a Belizean sunset. The party atmosphere at the Lazy Lizard attracts the Happy Hour crowd at all times of the day, making it the ideal spot to catch the smooth Caribbean vibe.

The Split, a channel dividing Caye Caulker in half that was created by Hurricane Hattie in 1961, is located at the northern tip of the inhabited half of the island. Although Caye Caulker it’s the second largest of the Belizean cayes, it’s still only 4 miles long with the village section only stretching about a mile long.

As the photo illustrates, life moves much slower on Caye Caulker.

Have you visited Caye Caulker? Did you check out the Split while you were there?
Share your experiences in the comments section below