Well, it’s about that time again! Time for the next installment of our popular series about memorable moments drinking beer around the world.

The beer-tastic series continues with its 9th edition, serving up ten more unforgettable moments from around the world. 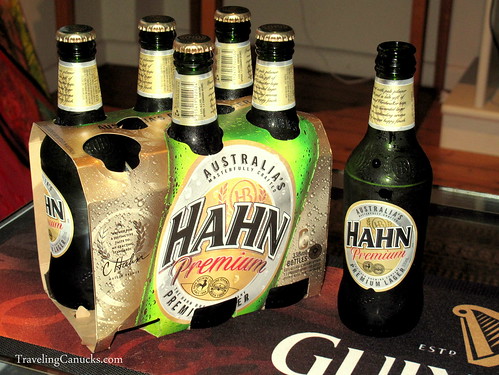 We enjoyed this 6-pack of premium lager with our hosts that lived in the Kings Cross area of Sydney. It was the first round of what turned out to be a whirlwind tour of several bars and clubs in the energetic mega-city. We were happy to have locals guide us through the city’s nightlife, introducing us to places we never would have experienced otherwise.

The beer verdict – Light, smooth, plenty of carbonation with decent body. We give it 7.5 out of 10 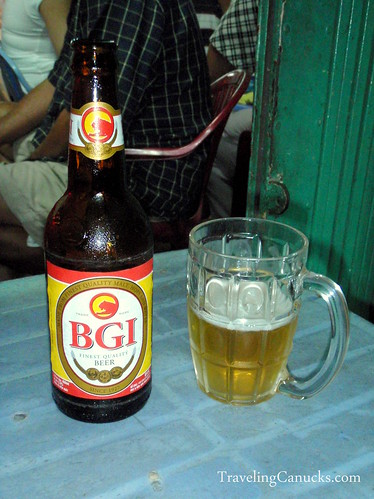 This was the first of many refreshing beers in the backpacker district of Ho Chi Minh City. We had just scored a pair of cheap flights from Hanoi to Ho Chi Minh City, saving us days of travel time. Although we sacrificed Vietnam’s popular north-south train journey, we were quite content spending a few extra days sampling the local food, drinks, shopping and sights. Vietnamese beer is not the greatest, but the spicy foods and humid weather easily disguise the average tasting brew.

The beer verdict – Cold and refreshing, but tangy and average. We give it 6 out of 10 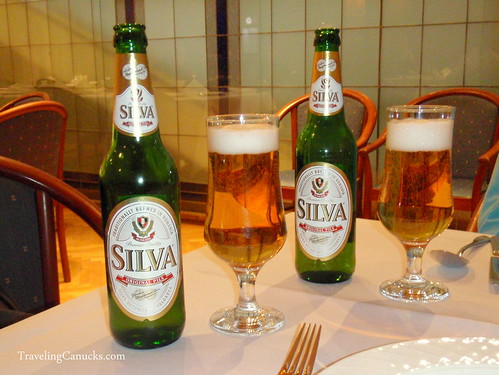 These tall bottles of Pils were consumed in an oddly decorated restaurant in the outskirts of Bucharest. We were staying with family friends that we had never met, and had a few hours to burn before they returned from work. They lived in the upscale expat area of the Romanian capital, with limited restaurant options within walking distance. We had just spent the better part of the day traveling overland from Veliko Tarnovo in Bulgaria, so these late afternoon beers were a welcomed treat.

The beer verdict – Clear and light, mildly hopped with bitter aftertaste. We give it 6 out of 10 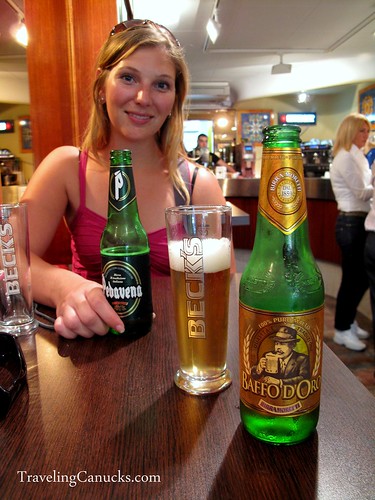 After spending the morning exploring the tight cobblestone streets and canals in Venice, these tasty beers were enjoyed at a cute cafe located just outside the popular Piazza San Marco (the main pedestrian square). I don’t know why, but food and drinks seem to taste much better in Italy!

The beer verdict – Light and tasty, mild bitterness with decent body. We give it 7 out of 10 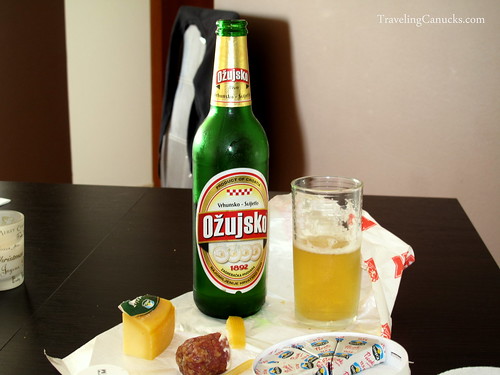 This memorable moment in beer comes from our apartment rental on the Croatian coast just south of Split, the largest Dalmatian city and second-largest urban center in Croatia. This particular afternoon happy hour was spent snacking on a variety of cheese and cured sausages, overlooking the calm Adriatic Sea. Though not particularly eventful, it was a memorable afternoon of doing a whole lot of nothing.

The beer verdict – Malty and sweet, slightly bitter, flavourful but skunky after taste. We give it 7 out of 10 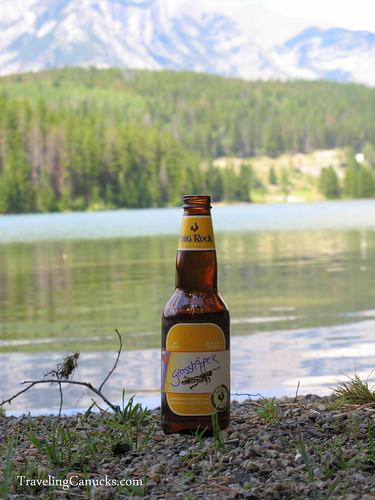 Okay, so we had to add some Canadian love to the mix! Most Canadians will tell you there are better beers out there (which is true), but there are few better views than those found in Banff National Park. Plus, we felt it was important to drink Alberta beer during our time camping in Alberta. It’s easy to see why this was our favourite campground during our Canadian Rockies Road Trip.

The beer verdict – Clear wheat ale with full body, full bodied, sweet with hints of citrus and fruit. We give it 8 out of 10 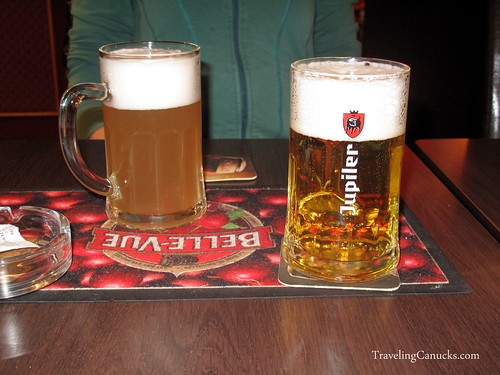 I know, I know. There are much better Belgium beers than the mainstream Jupiler Beer (don’t worry, we sampled several of them too!). But this moment stands out because it was an impromptu night out.

We were staying at a family friend’s apartment in the capital, located within walking distance to the stunning Grote Markt. With no expectations, we wandered around the neighbourhood and found a lively little pub that embodied the European ambiance we were looking for. It turned out to be the most memorable evening we spent in Belgium. 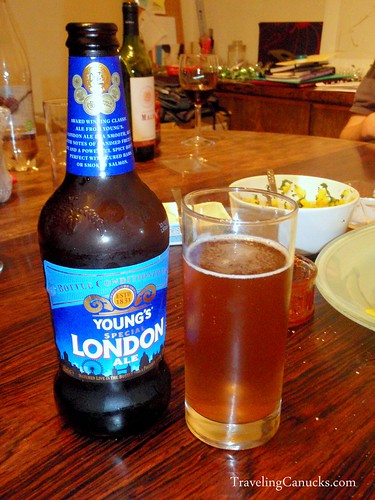 This full bodied ale was enjoyed in London with our Kiwi friends that we had met on our round-the-world adventure. We were staying at their flat for a few days when the United Kingdom received one of its biggest snowstorms on record, resulting in cancellations to all flights to London. With the severe weather relentlessly pounding the country and all airports shutdown, we were quite happy to have the comforts of good food, good company and good beer.

The beer verdict – Full bodied with great amber colour, sweet and tasty, good finish. Enjoyable on a cold winter evening. We give it 8.5 out of 10 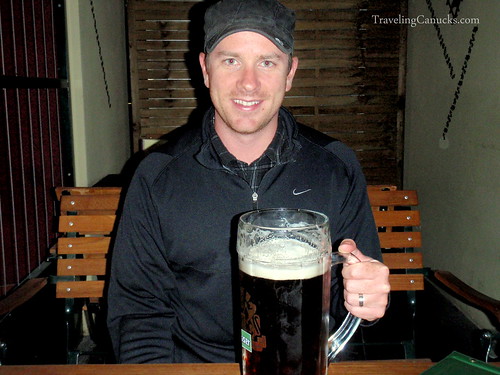 Gosser Beer Mix (half dark and half lager) – Vienna, Austria

The biggest beer I’ve ever consumed (and witnessed for that matter). Yup – that is two litres of liquid goodness! We stumbled on this restaurant that had an “extra large” theme and figured we’d give it a try. The advertising didn’t lie! The hamburgers were the size of pizzas and an order of “regular fries” was enough to feed a family. This was the “regular” beer, which meant that there was a beer even bigger than this one (but that seemed a little unnecessary!).

The beer verdict – The combo of light and dark beer tasted surprisingly good, light but full bodied. Regardless, it’s a 2-litre beer so it gets an automatic 9 out of 10 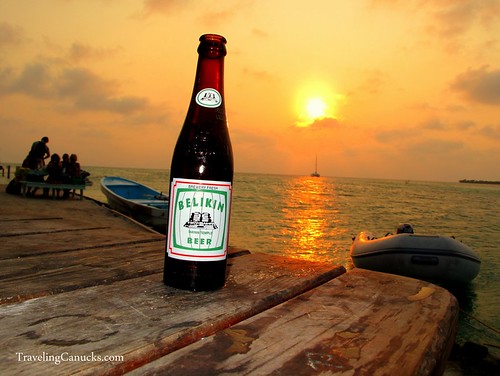 This photo does a fantastic job telling the story. Soft pastel sunset, cold beer and a table perfectly situated with unobstructed views of the calm Caribbean waters – what more can you ask for?! This beer was enjoyed at the popular Lazy Lizard, a beach bar located at the Caye Caulker Split (here is a better picture of the Caribbean beach bar). Belikin is the beer of choice in Belize, although it’s difficult to find alternative options.

The beer verdict – Crisp and refreshing, heavily carbonated with limited flavour. The bottles are way to small and deceivingly heavy. We give it a generous 7 out of 10