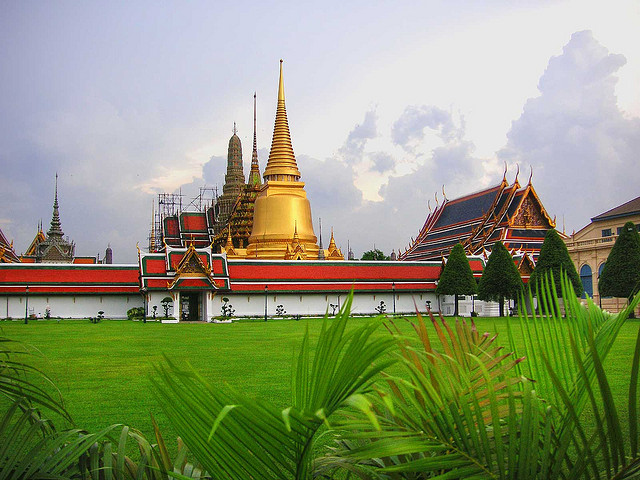 Did I ever tell you about the time I got Robbed in Bangkok?

The sad part is – it’s true. I did get robbed by a Thai prostitute on the streets of Bangkok, but it’s not how it sounds (geez, get your head out of the gutter).

Now, before I tell you the story, let me first state that Thailand is a safe country. You don’t need to worry about getting robbed, just stay away from prostitutes at 3:00AM and you should be fine!

This story begins back in 2004, when we visited Thailand for the very first time. In fact, it was our first trip to the Asian continent, so you can imagine our sensory overload.

We did what most young backpackers do when they first visit Bangkok’s popular Khao San Road – drink excessively until the early hours of morning. 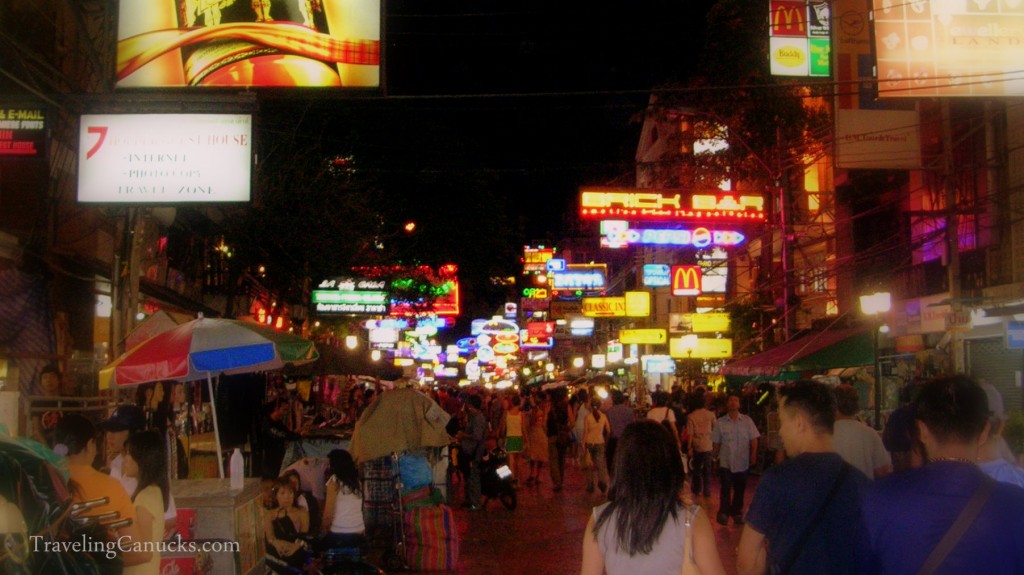 After filling ourselves with delicious street food and several cold Chang Beers, we began our slow walk back to the hostel. On the way, Nicole stopped at a 7-11 convenience store to pick up a new calling card for her cell phone.

The plan for the next day was to meet up with friends from Nicole’s student exchange program in Penang, Malaysia. To do so, we needed a calling card so that we could inform them where our hostel was located. A seemingly uncomplicated task that turned out to be quite the ordeal.

While Nicole was inside the store, I stood outside and waited patiently. Within seconds, I was approached by a hungry prostitute who offered me some “lovely good times”.

It was my own fault. I clearly looked intoxicated and was easy pickings, not something one should do in public (especially in a foreign country).

When the offer for “lovey, lovey” was refused, the prostitute decided to heat up the request and headed south, to the “no fly zone”. Startled by the clear lack of personal boundaries, I pushed her (or him?) away and politely declined once again.

The alcohol slowed down my internal processor. I was in shock – did that really just happen?!

I pushed her away and cautiously said, “not interested, move along”. She finally got the hint and walked away, turning back every few steps to see if I had miraculously changed my mind. No chance.

I actually thought the incident was quite comical.

In fact, I recall opening the door to the air-conditioned 7-11 and yelling to Nicole, “you’re never going to believe this, a prostitute just grabbed my <insert slang term for male organ>!”

The store clerks didn’t care for my colourful commentary. 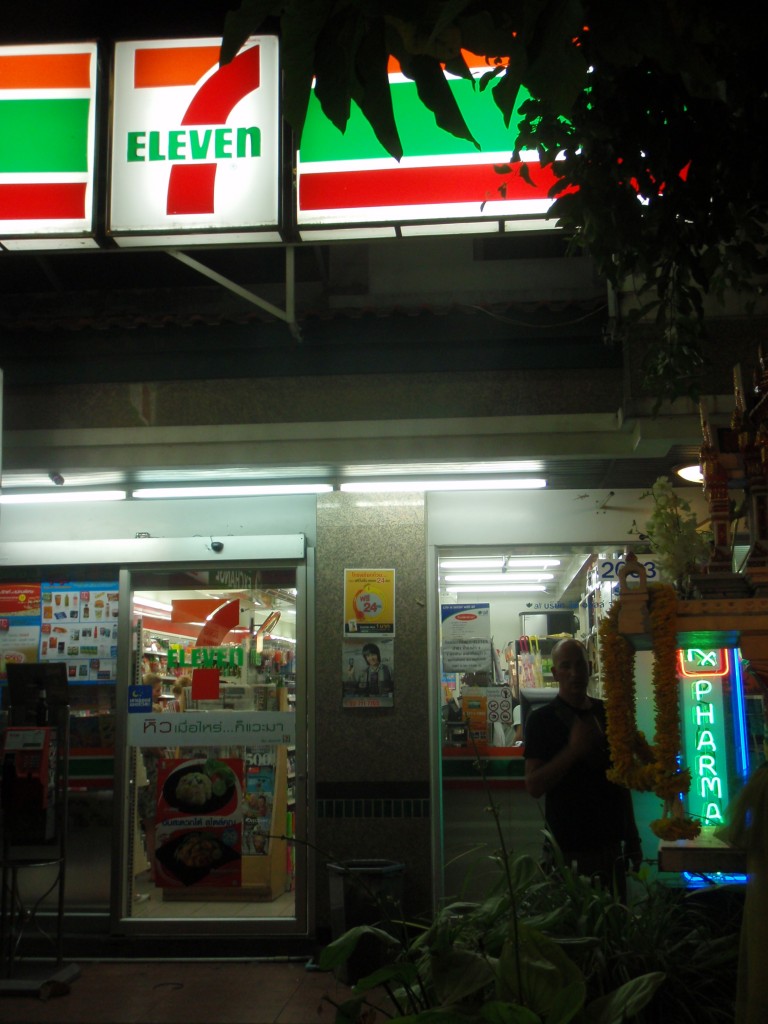 This is the EXACT store where the incident occurred (about 10 feet to the right).
We revisited Bangkok in 2009 and took this picture to capture the memory

What I failed to realize was that the “junk grabbing” was just a diversion for the crafty pickpocket to reach into my back pocket and grab my wallet.

I didn’t realize that I had been robbed until the following morning, when it came time to check out of the hostel. I reached for my wallet and then it hit me. My mind raced to put the pieces back together. After we ripped apart our bags and searched every corner of the hostel room, we realized what had happened. Then panic set in.

“What if my credit card has been compromised?!”

A quick inventory revealed that I didn’t actually lose much. Fortunately, I make it habit to split up my important items. That night, I only carried my bank card, drivers license and about $75 cash, all items that can be easily replaced. 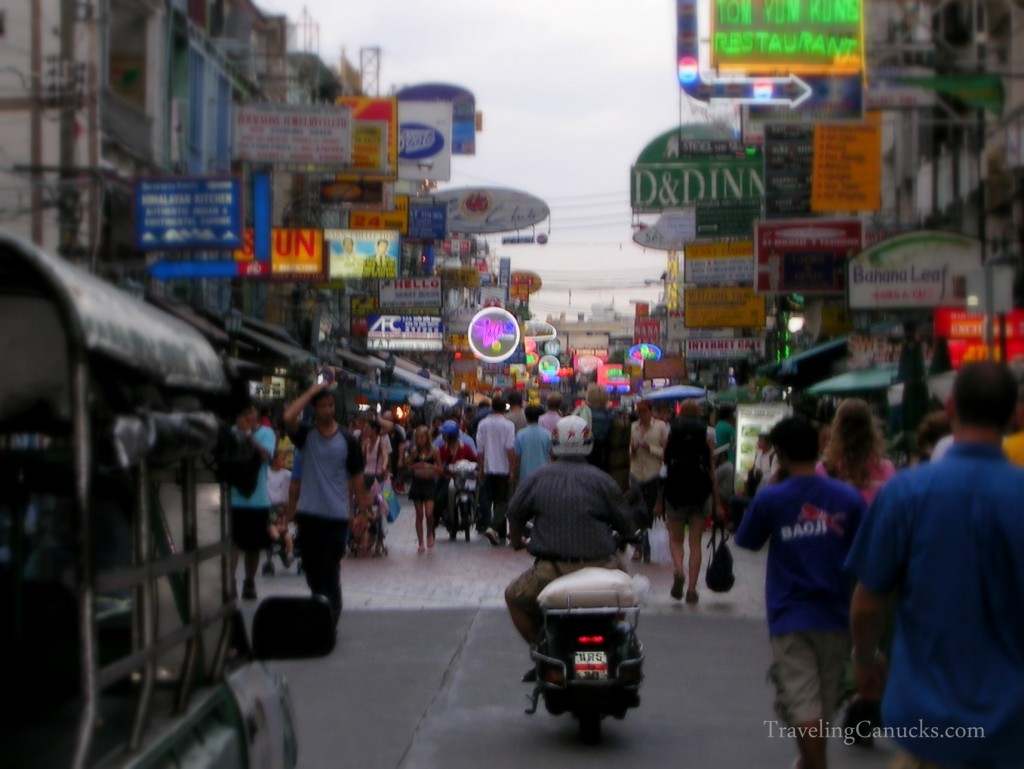 We spent the better part of the day trying to call my Canadian bank (back in 2004 it wasn’t as easy to make international phone calls). When we finally connected with someone, we were informed that several attempts had been made on my account before the card was automatically cancelled.

No damage was done, the thief was unsuccessful in breaking into my bank account. But I can only image what happened to my drivers license!

At the time, I was super pissed off because we were on a tight budget. But, I’ve been telling this story for years now, so I think it was well worth the lost $75!

Have you ever been robbed while overseas?
Share your story in the comments section below – we’d love to hear about it!