Well, it’s about that time again! Time for the next installment of our popular series about memorable moments drinking beer around the world.

The beer-tastic series continues with its 10th edition, serving up ten more unforgettable moments from around the world. 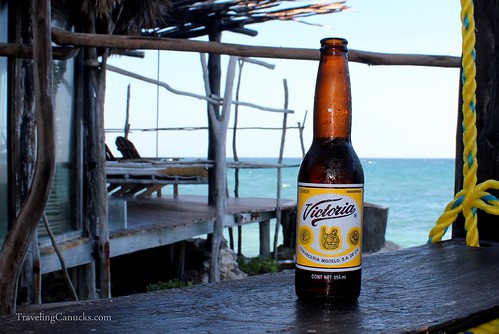 This familiar bottle of cerveza was enjoyed on the private deck of our fantastic beachfront villa after exploring the ruins of Tulum. With unobstructed views of the sparkling Caribbean Sea, its no surprise that this unforgettable moment made the list. When we think of tropical paradise, images of bright sunshine, turquoise water and cold beer come to mind. This moment had it all!

The beer verdict – Light and refreshing, plenty of carbonation with decent body. We give it 7 out of 10 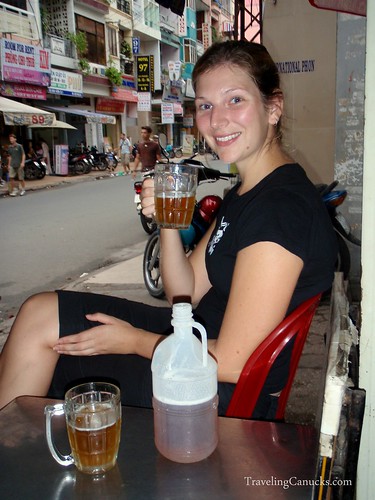 After hours of wandering up and down the noisy, exhaust fumed streets of Ho Chi Minh City, we finally found a small makeshift bar that was serving up Vietnam’s infamous Bia Hoi. The cheap home brew was served in a 4-litre plastic jug, taken straight out of a steel drum (we didn’t really want to think about the manufacturing process). That jug in the photo beside Nicole cost less than US$1, providing the inspiration for an interesting, fun filled evening in the city. 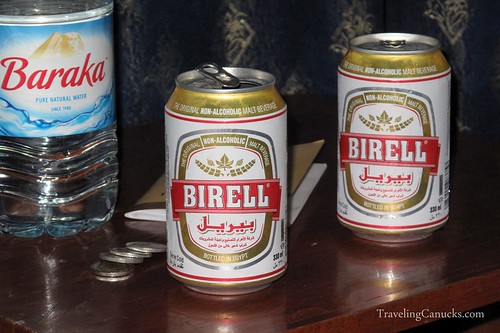 If you’re the observational type, you’ll notice that this can of beer is actually “non-alcoholic”. Therefore, technically it shouldn’t be included in this post. However, we didn’t realize this until after drinking one and asking each other, “is it just me, or is this beer really weak?”

We clearly weren’t paying attention and grabbed a few cans that looked like beer from the lone fridge at the Cairo train station. Being a Muslim country that frowns on alcohol consumption, we should have known better! We boarded the overnight train from Cairo to Luxor and looked forward to enjoying a few cold beers in our private room. Sadly, these cans of malty liquid just didn’t do the trick.

The beer verdict – malty and sour with terrible aftertaste, not good. We give it a 1 out of 10 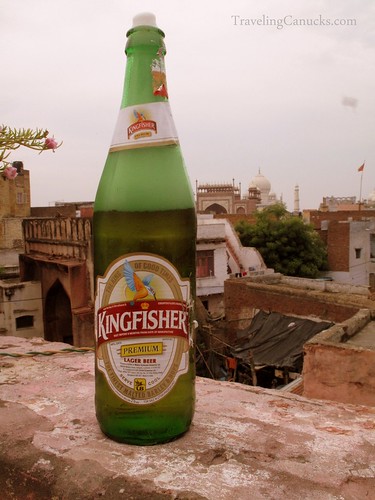 This photo does a fantastic job portraying the city of Agra, India. We drank this warm bottle of Kingfisher on the rooftop of our budget hotel, watching the sun set over the majestic Taj Mahal. The soothing Muslim call to prayer surrounded us, vibrating across the city as children and fathers flew their colourful kites in the thick humidity. It’s amazing how the street level chaos disappears once you reach the peaceful rooftop terraces – it’s a completely different world.

The beer verdict – Malty and bitter with skunky aftertaste, heavily carbonated and served warm, not great but it’s the best India has. We give it a 6 out of 10 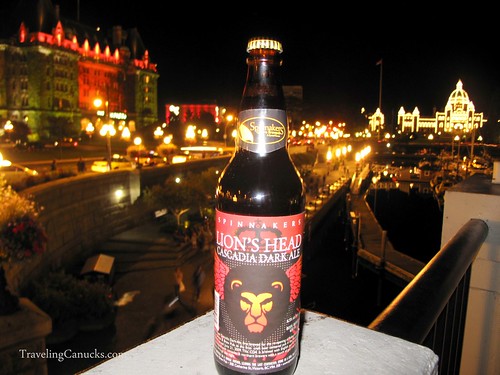 This tasty dark ale was purchased directly from Spinnakers Brewpub, one of the oldest breweries in the Pacific Northwest. We were still buzzing from our incredible whale watching tour with Prince of Whales, witnessing over 25 killer whales in the span of an hour! Public consumption of alcohol is not allowed in Canada, so this delicious bottle of beer was enjoyed at our luxurious boutique hotel, located within steps of Victoria’s picturesque Inner Harbour (where this photo was taken).

The beer verdict – Bold aroma, distinct hops and malts with slight bitterness, great colour and flavourful finish. We give it 8.5 out of 10 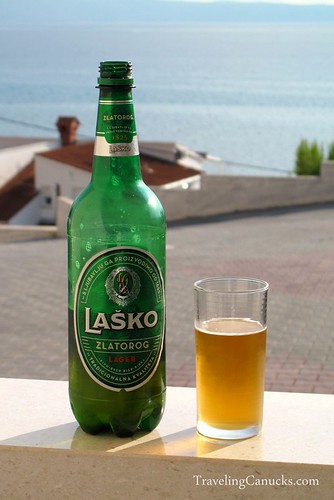 The body of water in the backdrop is the Adriatic Sea. We had just returned from an afternoon exploring Split’s historical harbour and old town. We enjoyed this massive bottle of lager on the patio of our vacation rental, soaking up the sun while we watched the remainder of the afternoon disappear. We were thankful to have found accommodations outside of the bustling city centre, allowing us to experience the peacefulness and simplicity of the Dalmatian Coast.

The beer verdict – Light bodied, clear and carbonated, refreshing but nothing special. We give it 6.5 out of 10 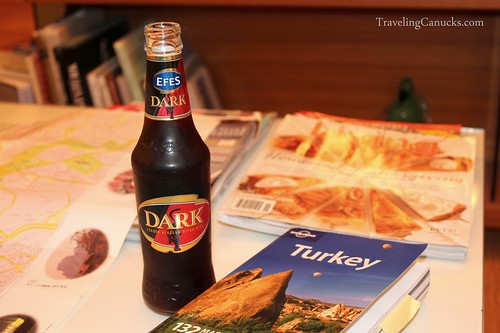 If you’ve traveled to Turkey, and you like beer, you’ve probably sampled a bottle of Efes Beer. In fact, it’s pretty much the only beer available in Turkey. This tasty beer was enjoyed inside our Ankara apartment, after a full day of sightseeing that included the Kocapete Mosque and the mausoleum of Mustafa Kemal Atatürk. It was also the night before we traveled to Cappadocia, where we spent a few days exploring the ancient fairy chimneys and rock formations in the Göreme Valley (as seen on the cover of the guidebook in the photo).

The beer verdict – Light body for a dark beer, malty and sweet with decent amount of bitterness. Enjoyed it more than the standard Efes beer. We give it 7 out of 10 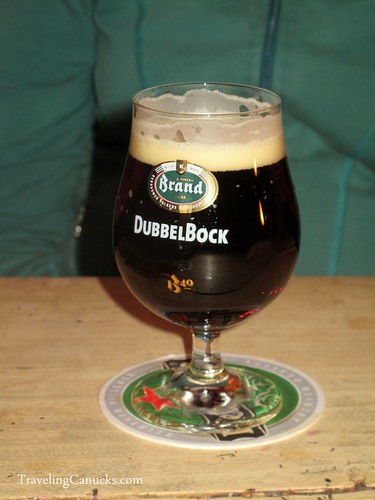 This picture perfect pint was consumed in a cozy Amsterdam lounge, located across the street from the Heineken Brewery. It was a chilly and damp November evening, so the warmth of the wood burning stove and the candles on the table were welcomed. There was nothing particularly special about the day or the evening, but the ambiance of this cute heritage restaurant made for an unforgettable evening – it felt very European.

The beer verdict – Full body, sweet and flavorful, great head and dark amber colour. We give it 8.5 out of 10 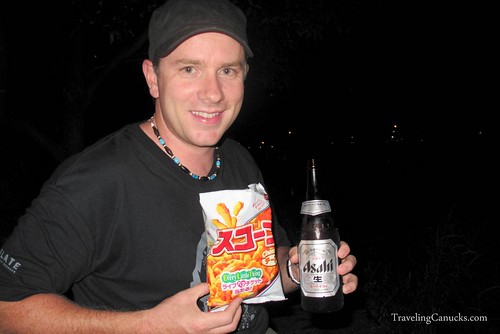 Although the photo does not properly show the setting, this world famous beer was enjoyed on the banks of the Kamo River in Kyoto. After stuffing ourselves with Yakitori at a traditional restaurant, we grabbed a couple bottles of Asahi beer and strange potato chips from the 7/11 store and headed to the popular riverbanks to hang out with the locals.

There were literally hundreds of people socializing along the water, singing and dancing, and basically drinking themselves silly. It was the perfect spot to people watch and enjoy a cold beer, though the potato ships were not very good (I think it was shrimp flavour?).

The beer verdict – Crisp and clean, refreshing and dry, good bitterness with smooth finish. We give it 7 out of 10 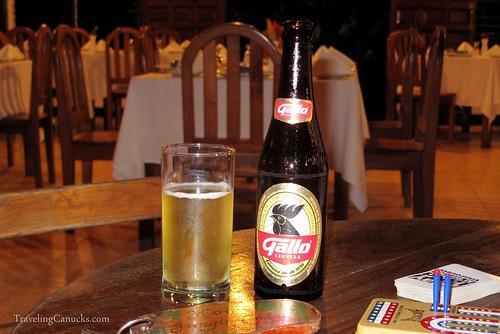 Our trip to Guatemala centered around the legendary Mayan Temples and Pyramids that are found in Tikal National Park. In order to catch both a sunrise and sunset over the pyramids, we decided to spend a couple nights directly in the park at the Jungle Lodge. To our surprise, we appeared to be the only guests in the lodge. As the photo illustrates, we had the entire restaurant (and lodge) to ourselves. This refreshing bottle of Gallo Cerveza was enjoyed over a couple rounds of cribbage, our staple travel game.

The beer verdict – Not great but light, clear and refreshing in the humid jungle. We give it 6 out of 10