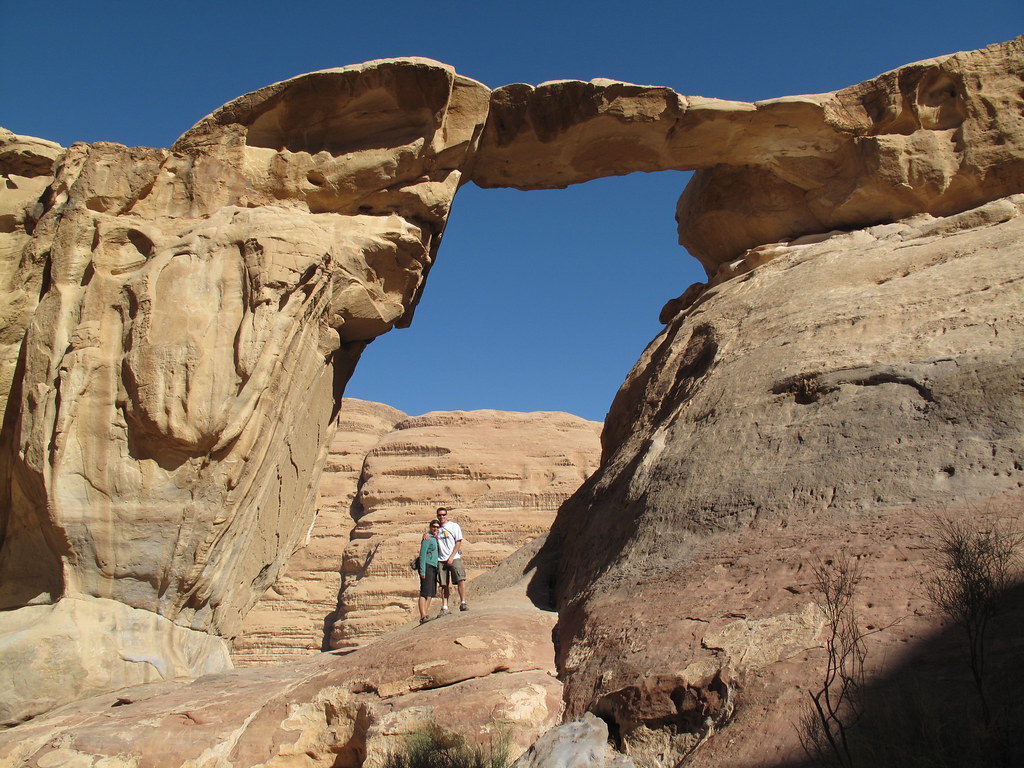 Our Travels and Adventures from A to Z

We have been nominated by our friends Sam of Nomadic Samuel and Ayngelina of Bacon is Magic to participate in a travel blogger meme that walks us through a series of questions, highlighting our travels from A-Z.

So let’s get going!

A: Age you went on your first international trip

B: Best (foreign) beer you’ve had and where

This is a tough one. We love to sample beer when we travel and have put together a series on our favourite beer drinking moments from around the world. But, if we must choose just one…

Nicole – Belgium. Can’t recall the specific name of the beer because it was a small brewery in Brussels
Cameron – 2-litre blend of Gosser Beer in Vienna, Austria (pictured below) 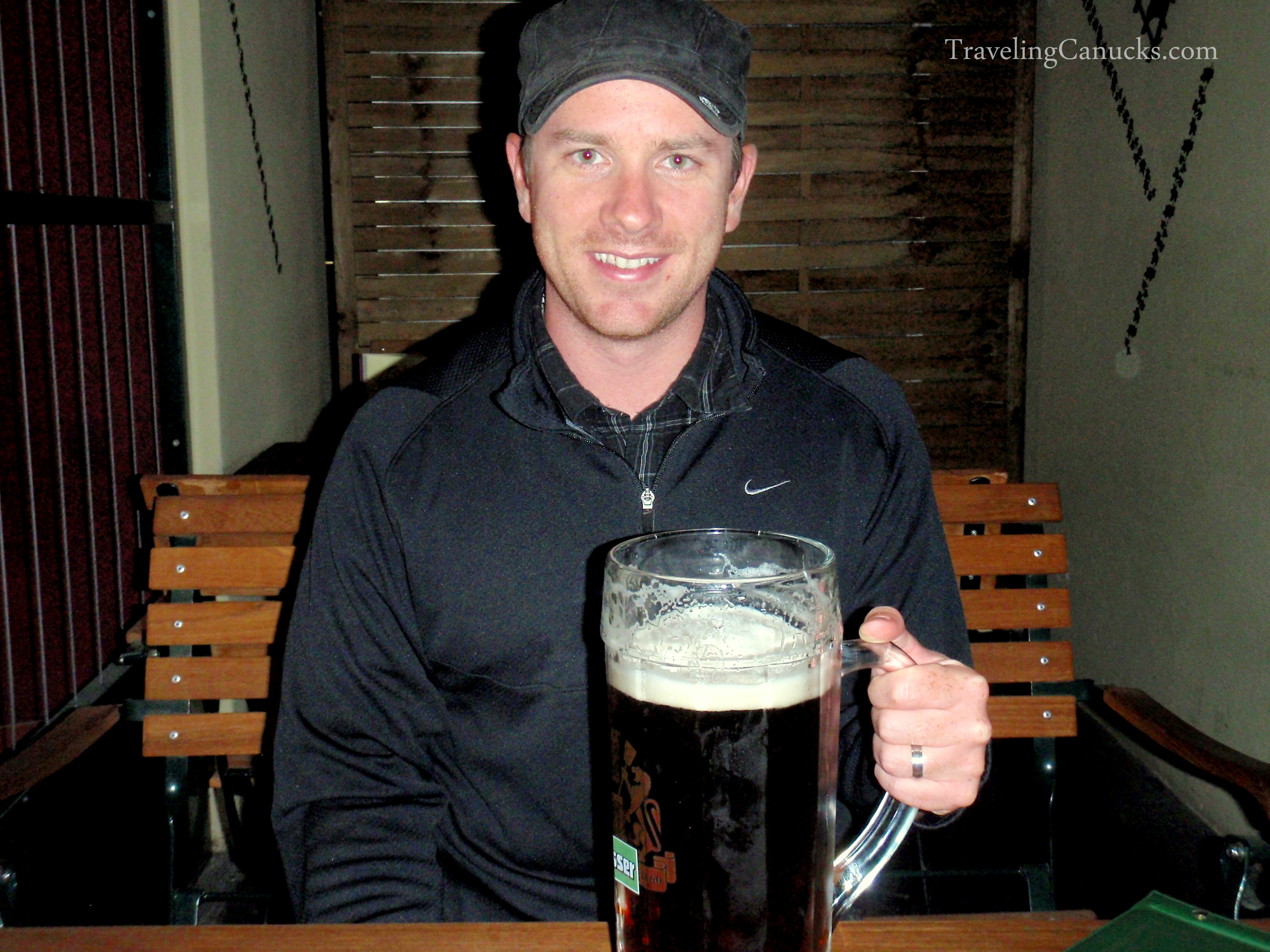 Nicole – Fresh seafood grilled on the beach in the Philippines
Cameron – Street food in Thailand, all of it!

E: Event you experienced abroad that made you say “wow”

Nicole – Sleeping under the desert stars at a Bedouin camp in the Wadi Rum, Jordan
Cameron – Witnessing a Buddhist prayer session in Bangkok, Thailand (pictured below) 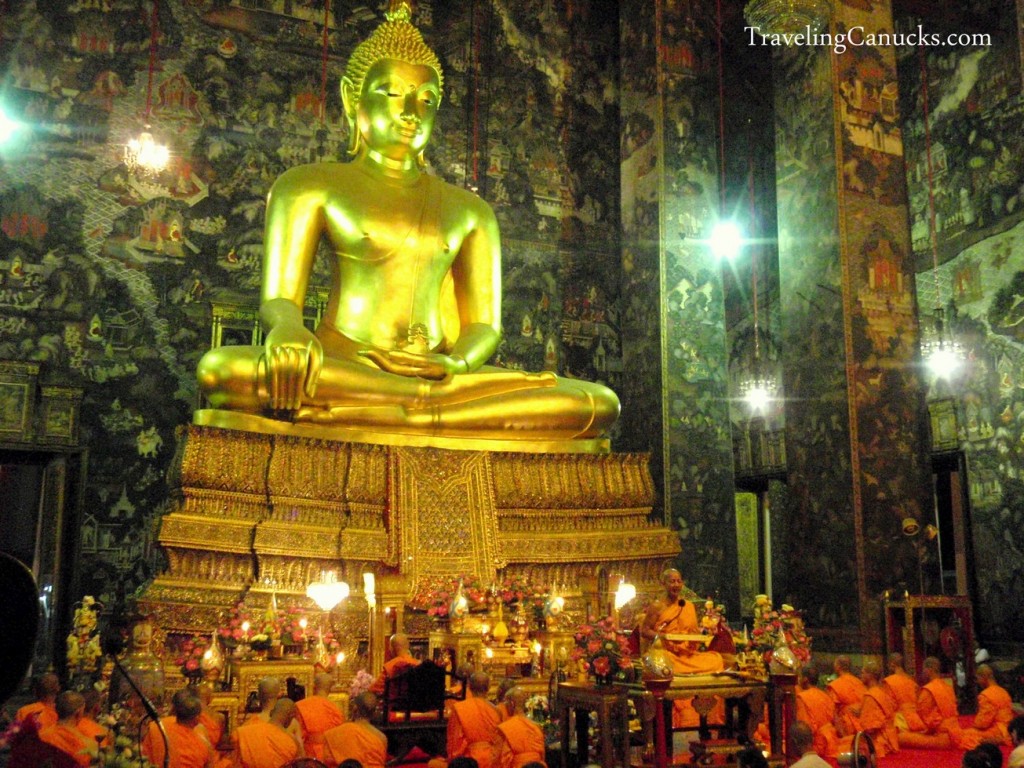 Nicole – Horseback. Whenever possible!
Cameron – I love train travel. It’s the best way to see the countryside and travel slow. And let’s not forget about the Asian tuk tuk (auto rickshaw). Read about our tuk tuk experience in India

Nicole – That feeling of excitement and anticipation you get at the airport just before boarding the plane, knowing that you are about to discover a new destination.
Cameron – Swinging in a hammock on a lazy tropical beach with a cold beer in hand 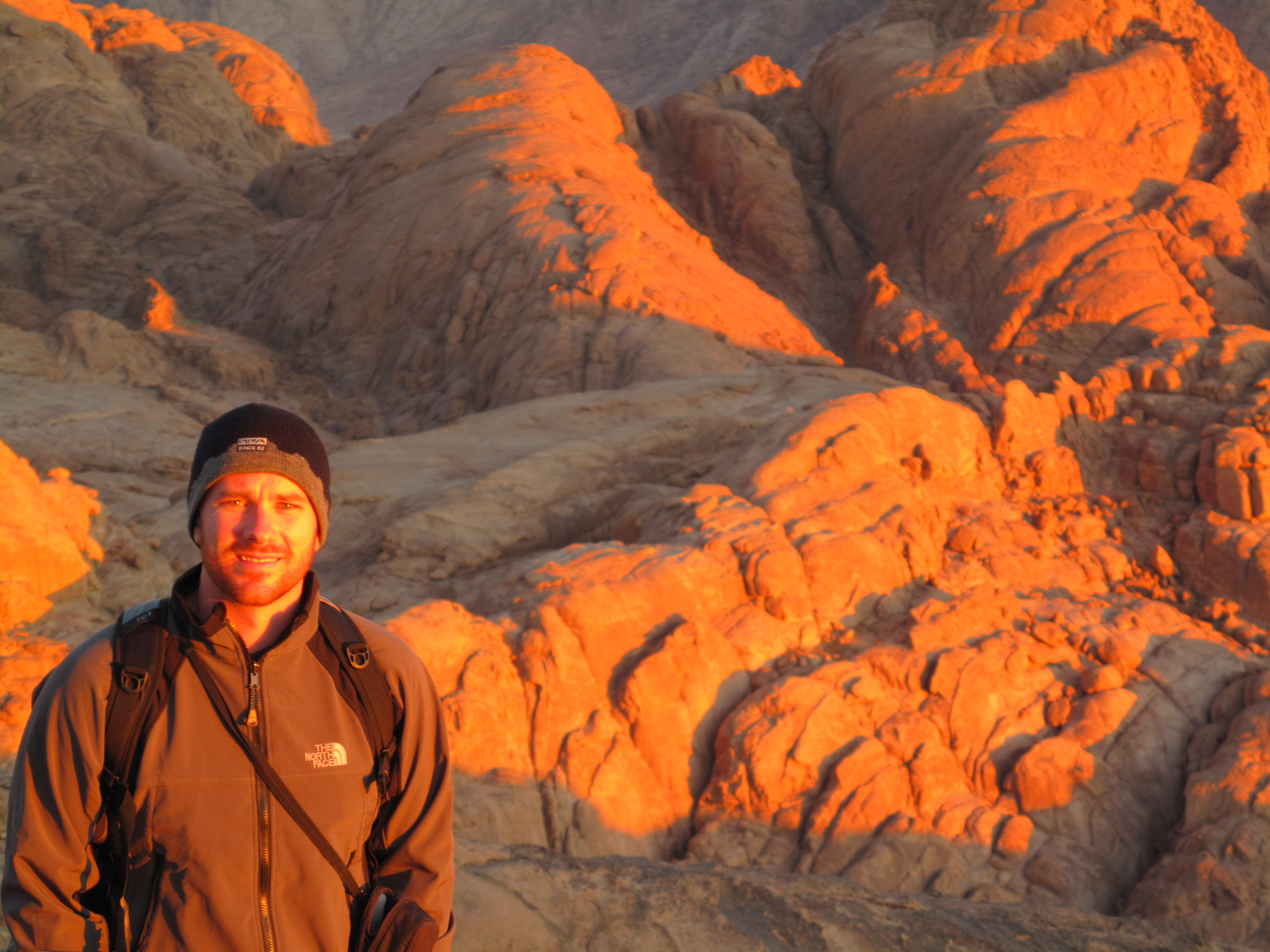 I: Incredible service you’ve experienced and where

Nicole – Victoria House on Ambergris Caye in Belize
Cameron -Ka’ana Boutique Resort in the Cayo District of Belize. Find out why here

J: Journey that took the longest

Nicole – Traveling from Chitwan Park in Nepal to Varanasi, India. In the end, we took two jeeps, 2 tuk tuks, 1 rickshaw, 2 buses and 1 overnight train for a total of 17 hours – not fun!
Cameron – Overnight bus trip from Luxor to Dahab, Egypt. The ticket agent said 12-14 hours but it actually took 22 hours with all of the stops and check points – terrible experience we hope to never repeat

K: Keepsake from your travels

Nicole – Photos. Lots and lots of photos!
Cameron – We collect masks from most countries we visit. We have a wall in our house that is filled with over40 different masks, each with their own unique story and personality

L: Let-down sight, why and where

Nicole – Halong Bay in Vietnam. Totally over-rated. But we live in British Columbia and are surrounded by natural beauty, so perhaps our standards are too high. It didn’t help that our trip was cut short because of a fast approaching typhoon.
Cameron – Scuba-diving the Great Barrier Reef in northeast Australia. Too many divers, super long travel time to dive spot and a severely damaged reef. Definitely not worth the $200 per person. Go to the Red Sea instead!

M: Moment where you fell in love with travel 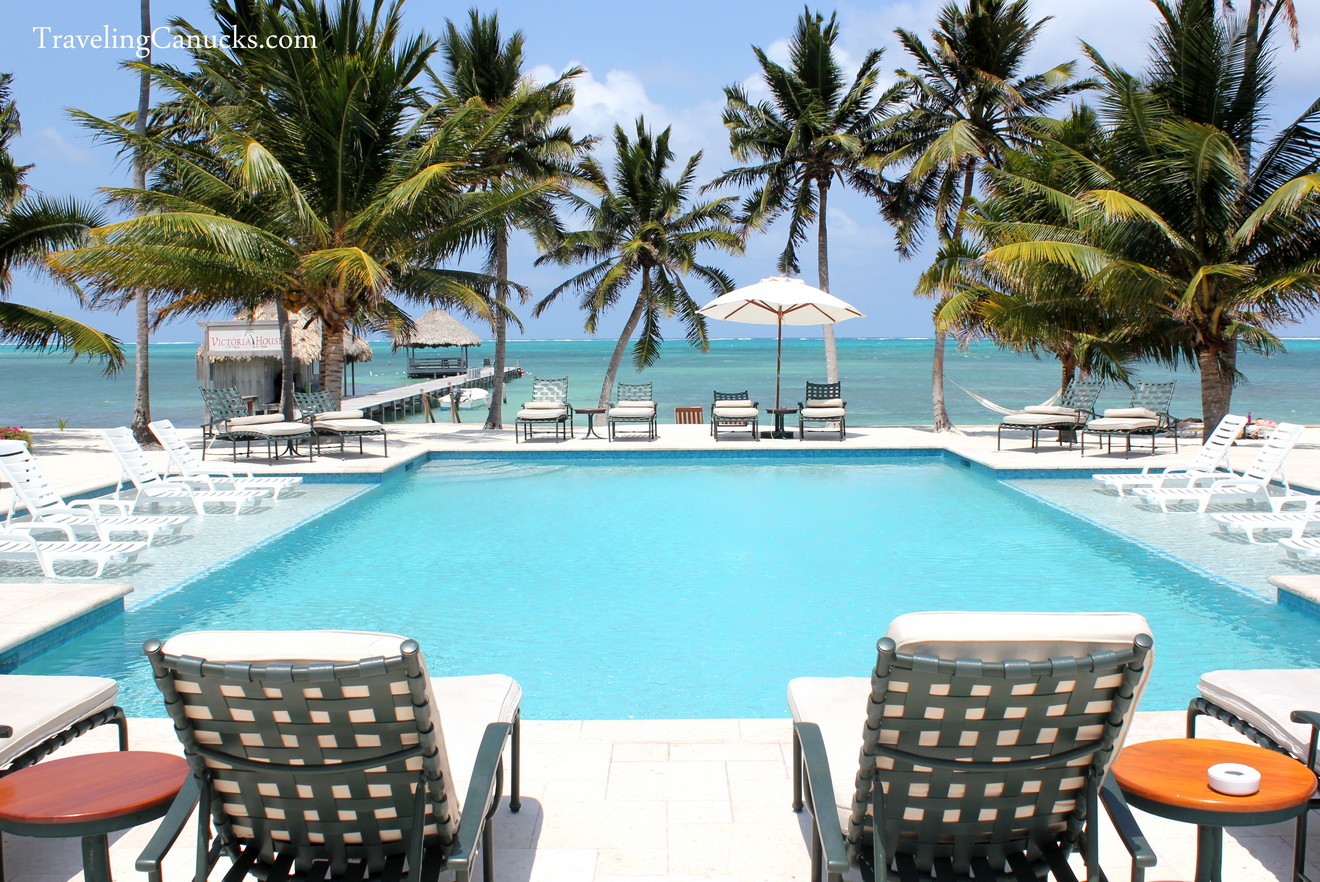 Pool at Victoria House in Belize

Nicole – Victoria House on Ambergris Caye in Belize. Private white sandy beaches, swaying palm trees, infinity pools and fantastic food.
Cameron – Iberostar del Mar in the Mayan Riviera. Although we are somewhat biased because we got married there in 2008 and received a beachfront upgrade and 5-star treatment from arrival until departure

O: Obsession – what are you obsessed with taking pictures of while traveling?

P: Passport stamps, how many and from where?

We both have hundreds of stamps from our travels. We even had to get a new passport issued because we ran out of space well before our passports expired 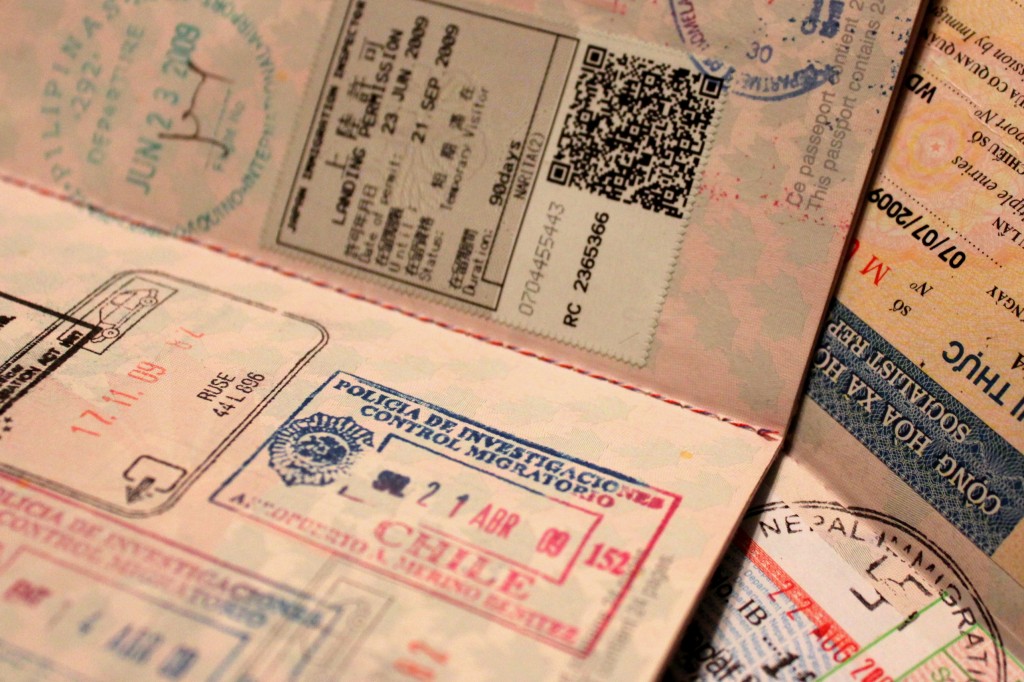 Nicole – We were recently on Galiano Island and visited a place called Stone World. The photos made it look intriguing but when we got there it was literally just a bunch of stones placed upright on a hillside
Cameron – We recently published a guest post on “quirky things to see in Canada”. Read the post here

S: Splurge – something you have no problem forking over money for while traveling

We both pick beer. Regardless of the cost, we will enjoy a few beers while traveling. We even had a cold beer deep in the Amazon jungle! 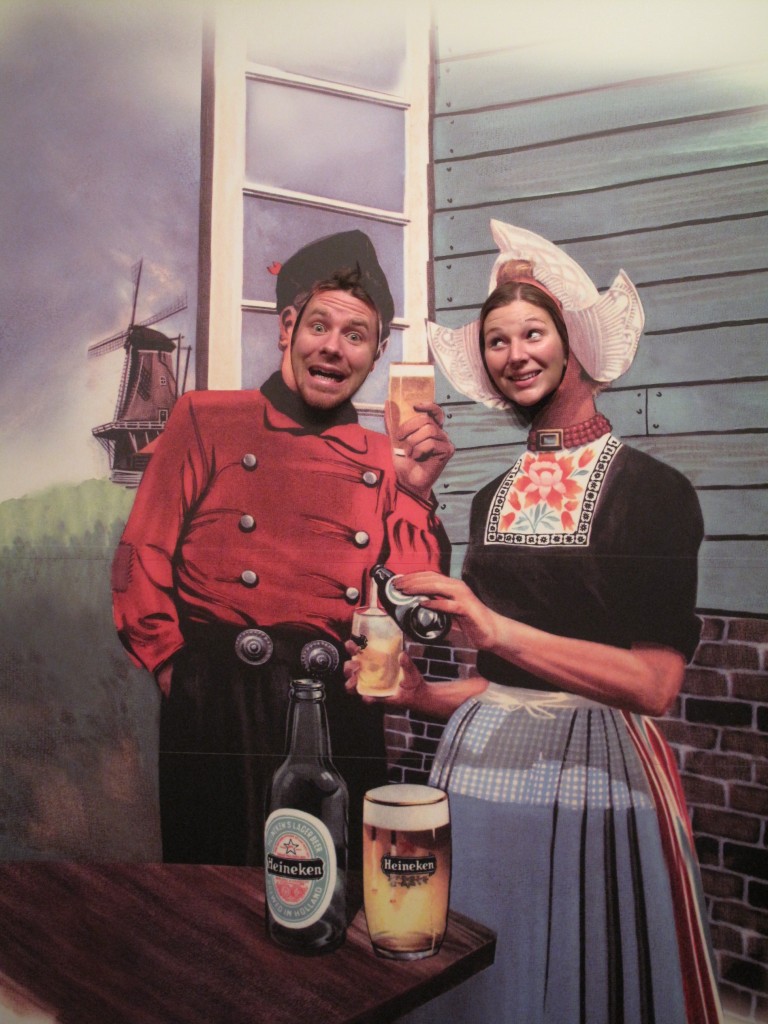 Nicole – Swimming with sea lions and penguins in the Galapagos Islands, Ecuador
Cameron – Night trekking to the summit of Mount Sinai to watch the sunrise over the rugged Egyptian peninsula (see the photo of Cameron above)

V: Visas, how many and for where?

W: Wine, best glass of wine while traveling and where?

Nicole – Riesling in Riel, a village in the Mosel region of southwest Germany
Cameron – Malbec in Medoza, Argentina 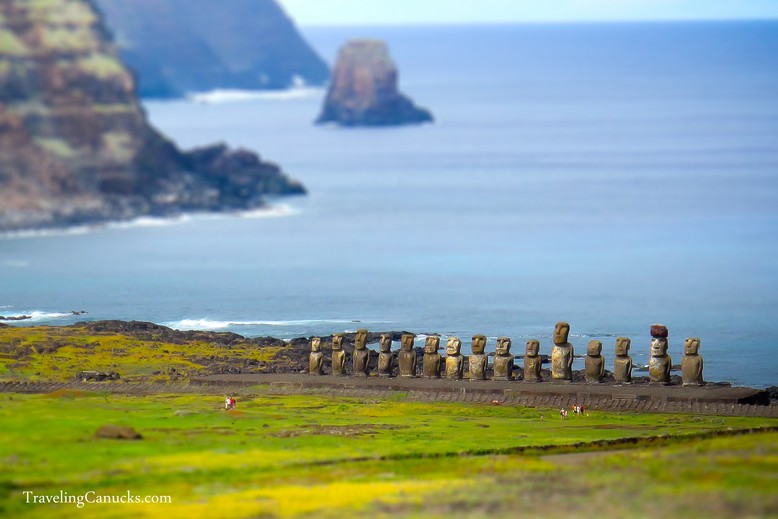 X: eXcellent view and from where?

We’ve done most of our traveling as a couple in the past 7 years, when we first lived in Malaysia in 2004. But we were both exposed to travel at a young age. 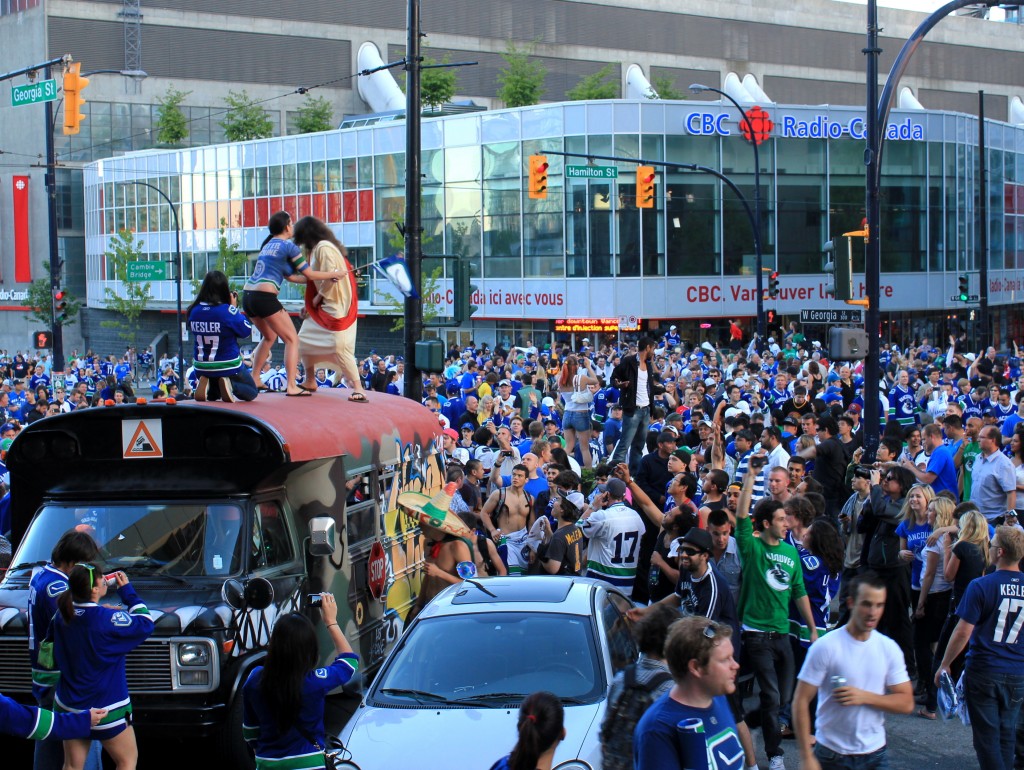 Z: Zealous sports fans and where?

Nicole – Soccer fans in Santiago, Chile. There’s a reason why alcohol is not served at the games!
Cameron – Hockey fans in Canada. Did you catch Game 7 of the Stanley Cup Finals in Vancouver earlier this year?! Check out the street celebrations after the Vancouver Canucks won game 5 at home (pictured above).

Congratulations! You made it to the end of our travels from A to Z