Well, it’s about that time again! Time for 2012’s first installment of our popular series about memorable moments drinking beer around the world.

The beer-tastic series continues with its 11th edition, serving up ten more unforgettable moments from around the world. Cheers! 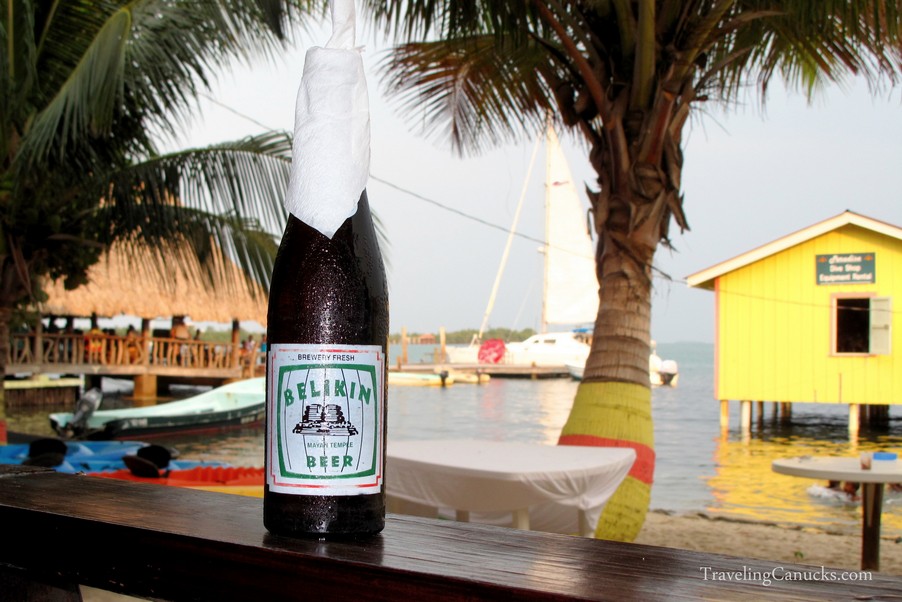 This tropical beer drinking moment comes from the lazy beaches of Placencia, a small Belizean town located on the Caribbean coast of Central America. We spent many hours soaking up the laid back atmosphere at the open-aired restaurant of Paradise Vacation Hotel, our home for a few days while we searched for whale sharks in the Belize Barrier Reef.

The beer verdict – Crisp and refreshing, heavily carbonated with limited flavour. The bottles are way to small and deceivingly heavy. We give it a generous 7 out of 10 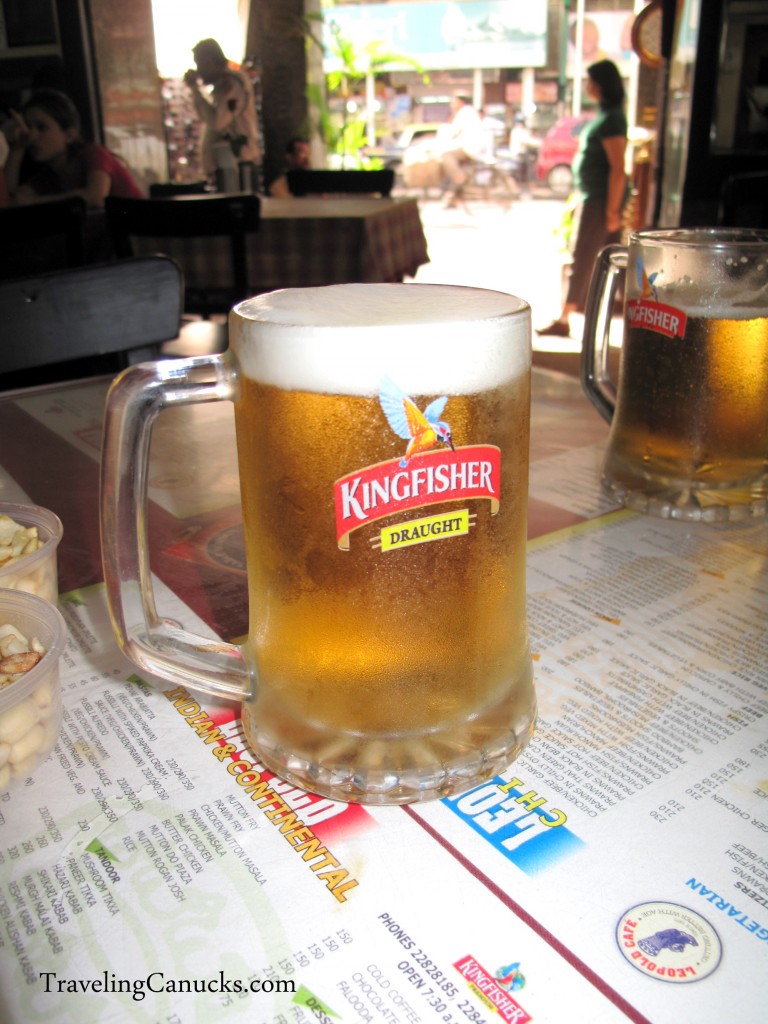 These frosty mugs of beer were enjoyed at the legendary Leopold Cafe on Colaba Causeway, in the Fort area of Mumbai. The restaurant and bar has been popular with foreigners, expats and tourists for years, however it has recently become somewhat of a landmark for unfortunate reasons. It was one of the first spots to be attacked during the November 2008 Mumbai terrorist attacks – a very dark day for humanity.

The beer verdict – Malty and bitter with skunky aftertaste, heavily carbonated but refreshing in India’s stinking humidity. We give India’s flagship beer 6 out of 10 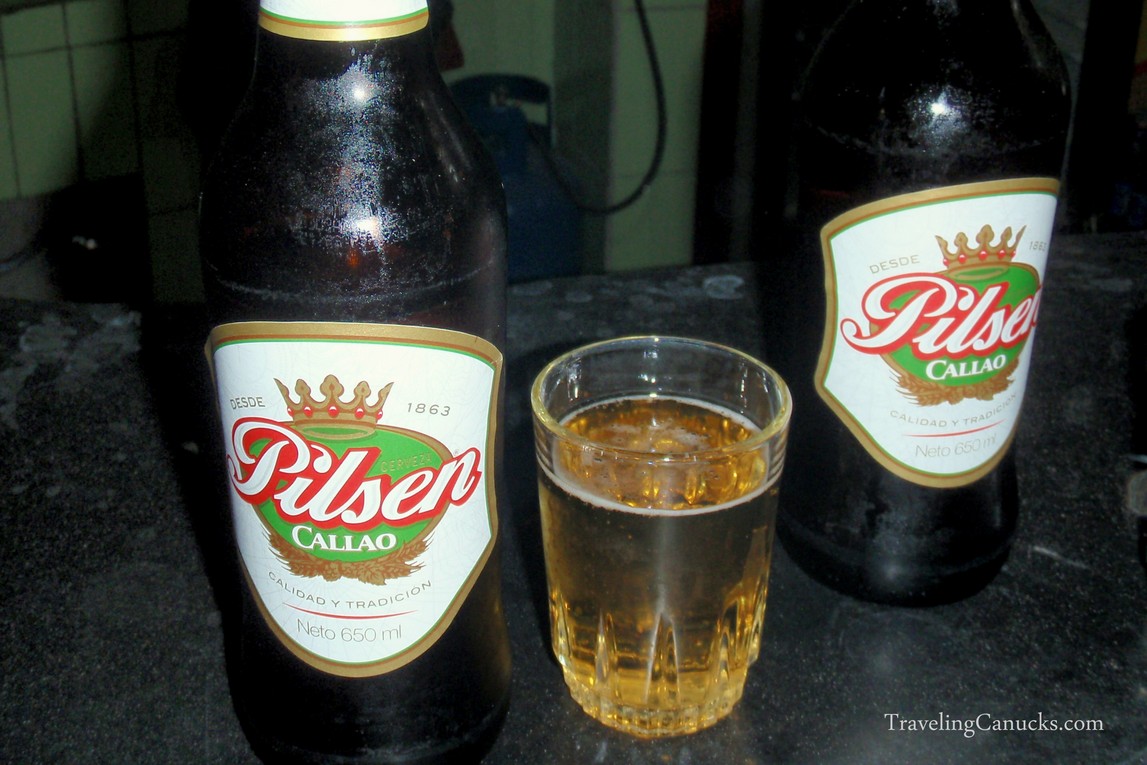 We enjoyed these tall bottles of Pilsen Callao after spending the day touring the islands of Lake Titicaca, including a stop at the floating reed islands. This was also the night we tried Cuy Chactado, a popular Peruvian dish that is basically a fried guinea pig. It was an interesting meal, but we were happy to have these beers to wash it down (what can I say – we’re just not big fans of eating greasy rodents).

The beer verdict – Sweet, tangy, somewhat flat. South America beer just isn’t very good. We give it 5.5 out of 10 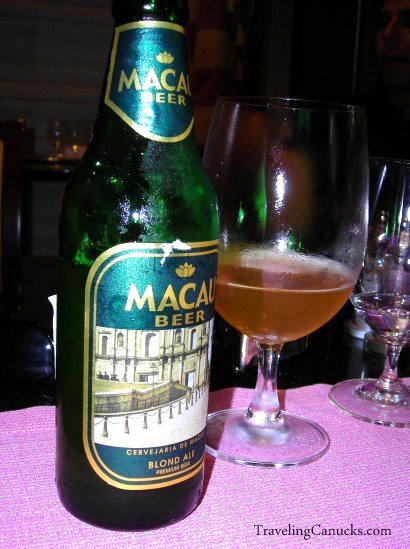 Often labeled as the “Las Vegas of the East”, Macau is a dazzling metropolis that tickles your senses. Enormous casinos sparkle beside colonial Portuguese architecture and traditional Chinese temples. We sampled this blonde ale in a swanky casino restaurant that was clearly out of our league, but it was fun to mingle with the high rollers and Chinese elite (even if they were looking at us kind of funny).

The beer verdict – Light gold colour, quite hoppy for a blonde ale but decent body. It was nice to sample a local beer amongst the sea of European and American imports. We give it 7 out of 10 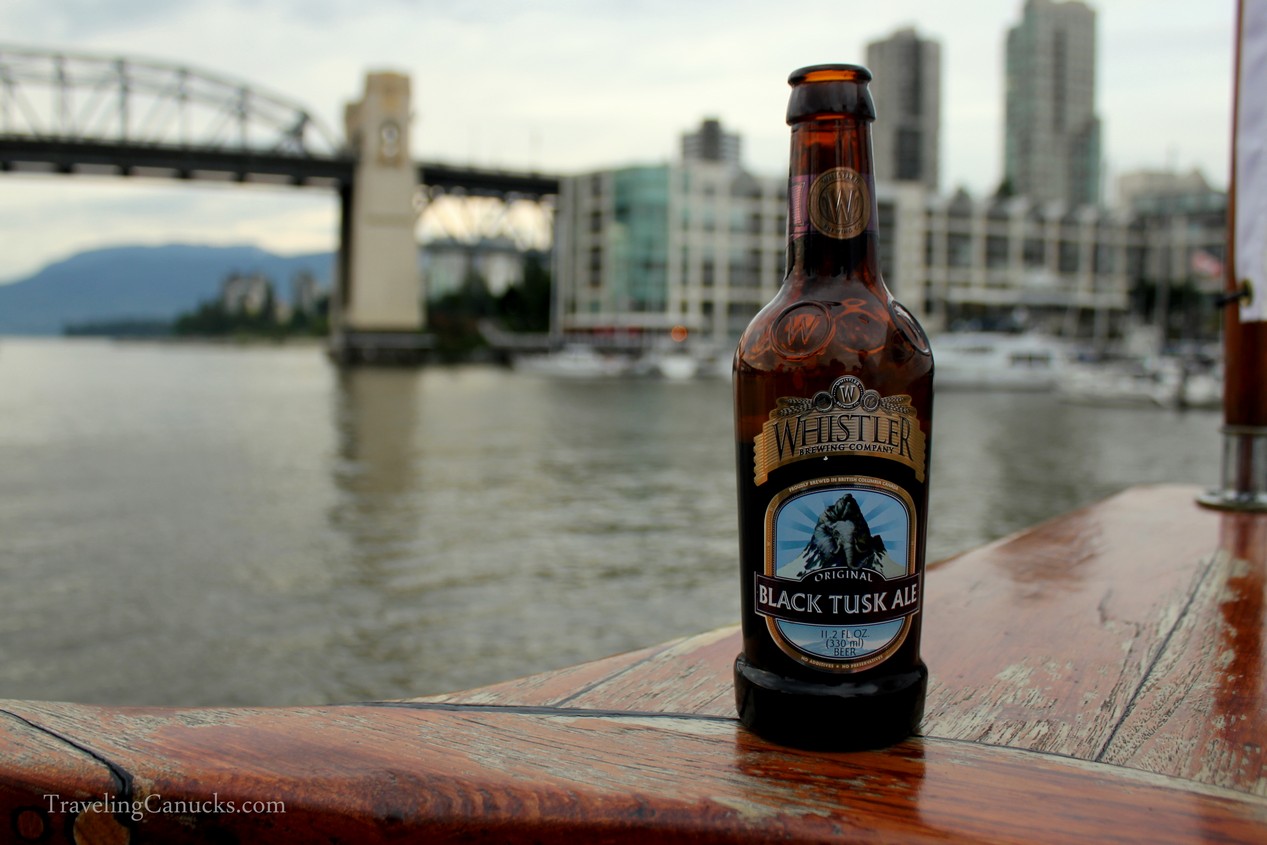 British Columbia has slowly become a player in the beer scene, with several micro-breweries and craft beer manufacturers scattered throughout the province. We enjoyed this tasty bottle of brown ale aboard a harbour boat cruise around English Bay, along with several of our travel blogger friends that were visiting Vancouver for the Travel Blogger Exchange (TBEX) conference in June.

The beer verdict – Caramel malt with light nuttiness, smooth with good body. We give it 7 out of 10 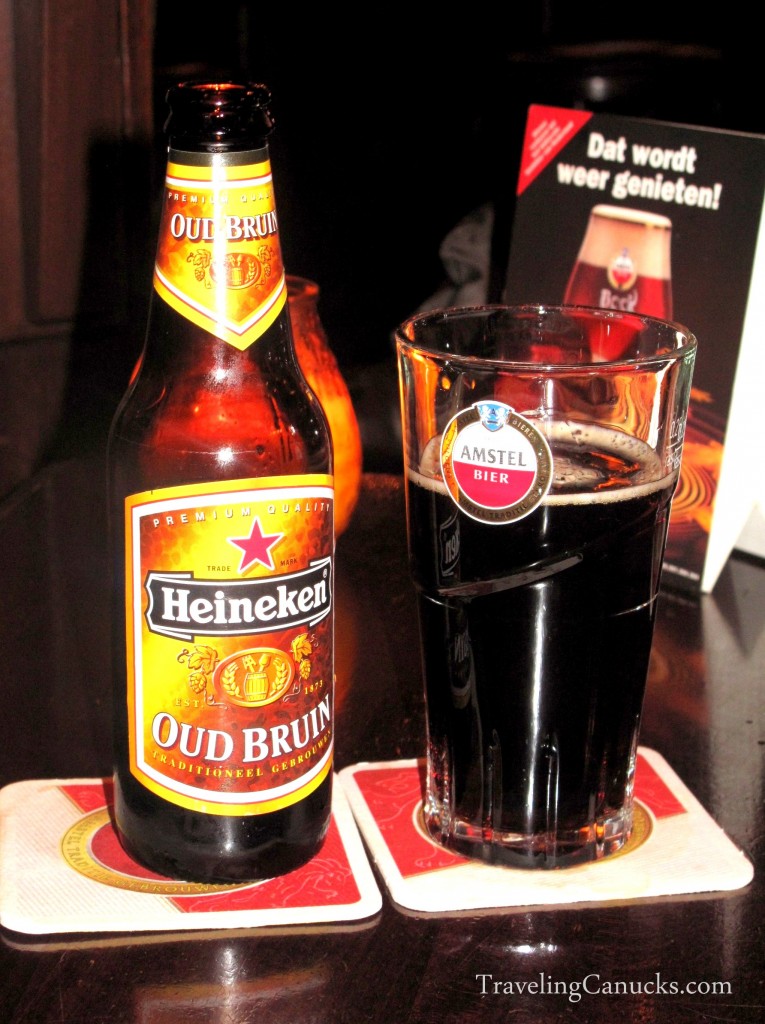 I don’t know why, but we felt the need to drink Heineken beer in Amsterdam. It’s not that the beer tastes any different when consumed in its home country (in most cases), it just felt like the right thing to do. Though I’m not typically a fan of Heineken, I had to try this Oud Bruin that was being served at a lively pub near our boutique hotel in the heart of Old Amsterdam.

The beer verdict – Nice dark colour but light body and carbonation, sweet and slightly bitter, not my favourite but I’d order a second. We give it 7 out of 10 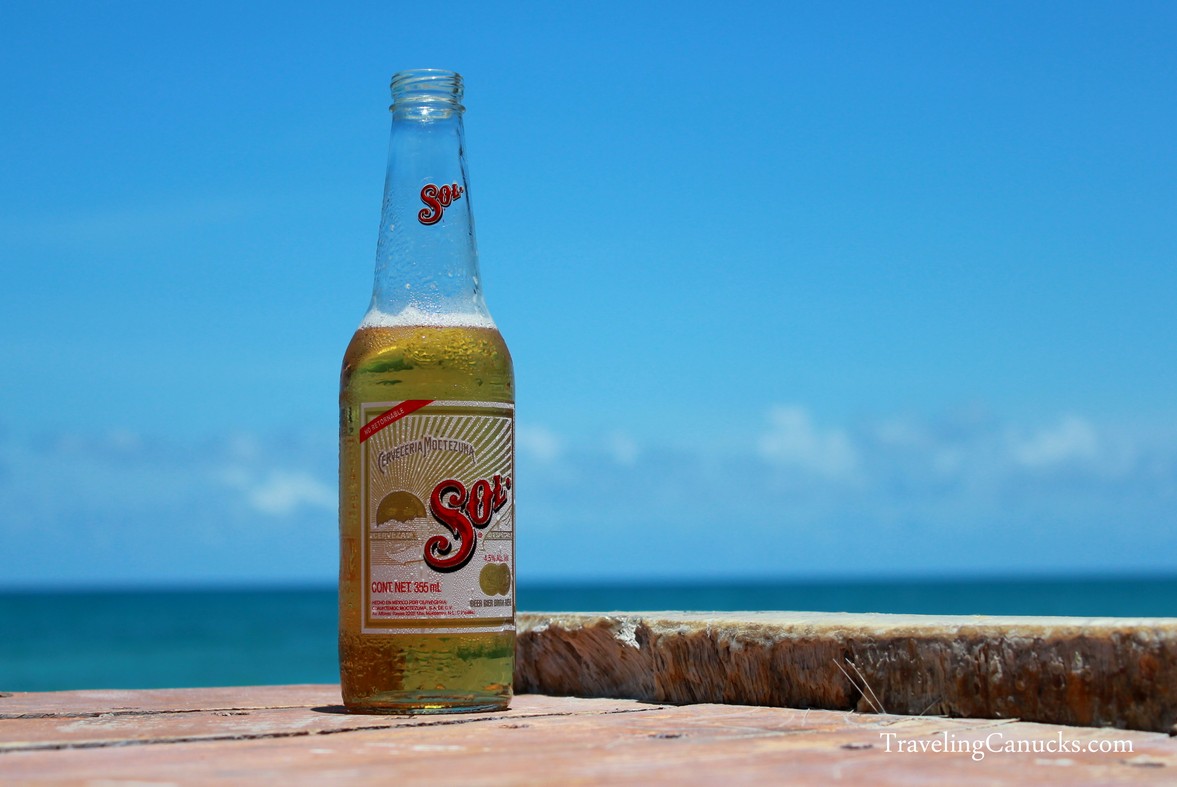 This refreshing bottle of cerveza was enjoyed on the private deck of our fantastic beachfront villa after exploring the ruins of Tulum. With unobstructed views of the sparkling Caribbean Sea, its no surprise that this unforgettable moment made the list. When we think of tropical paradise, images of bright sunshine, turquoise water and cold beer come to mind. This moment had it all!

The beer verdict – Light and refreshing, plenty of carbonation, limited falvour. We give it 7 out of 10 After a full day of exploring the Temples of Angkor, we spent the evening wandering around the central market of Siem Reap. In search of Cambodian beer that was not Angkor Beer, we managed to find a few cans of Klang Beer hidden in the back of a convenience store fridge. It was the first time we had seen the interesting brand of beer, leading us to believe it wasn’t a Cambodian bestseller. After our first sip we understood why – it’s not good.

The beer verdict – Light and tangy, malty with a strong alcohol aftertaste. We give it 5 out of 10 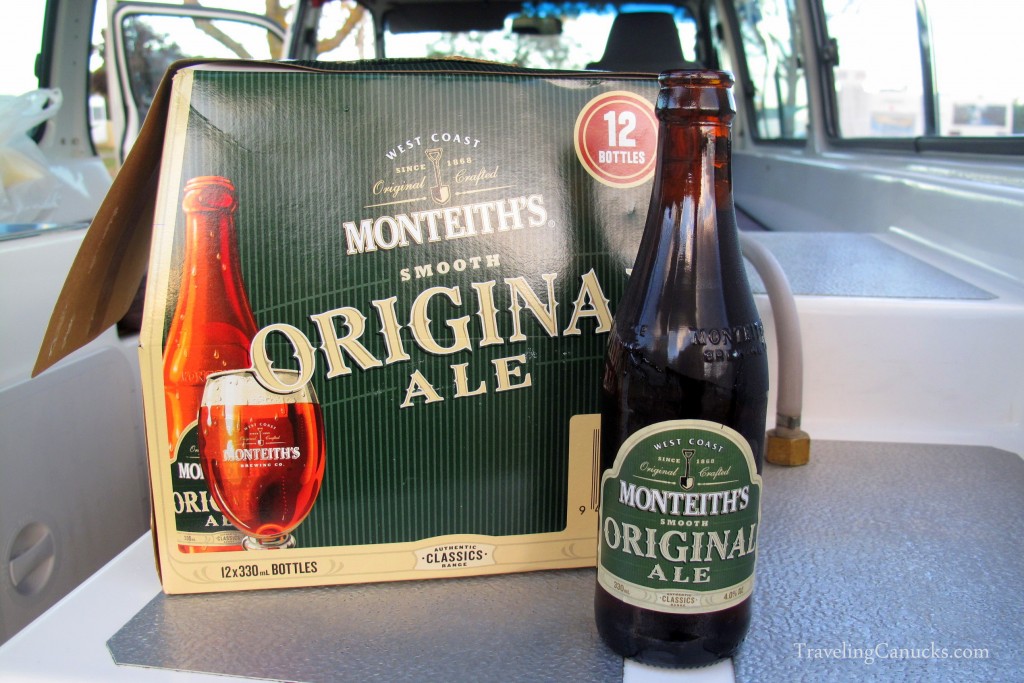 This case of Monteith’s was one of the most memorable from our campervan road trip from Auckland to Queenstown. We watched the sunset over the lake and enjoyed of few beers, surrounded by New Zealand’s natural beauty. There’s something about drinking a cold beer in the fresh outdoors that just feels right.

The beer verdict – Light ale with good balance of hops, malt and sweetness. We give it 7.5 out of 10 As we wandered around historical Vienna snapping photos of its stunning architecture, we found this carnival-like market in front of Vienna’s towering City Hall. It didn’t take long for the intoxicating smells of grilled sausage, sauerkraut and sauteed bacon potatoes to lure us into the market for an evening of cheerful festivities. If there’s one thing Austrians do right, it’s grilled sausages and beer!

The beer verdict – Smooth and malty, light colour but good body. It’s the perfect companion to spicy mustard and grilled sausages. We give it 8 out of 10