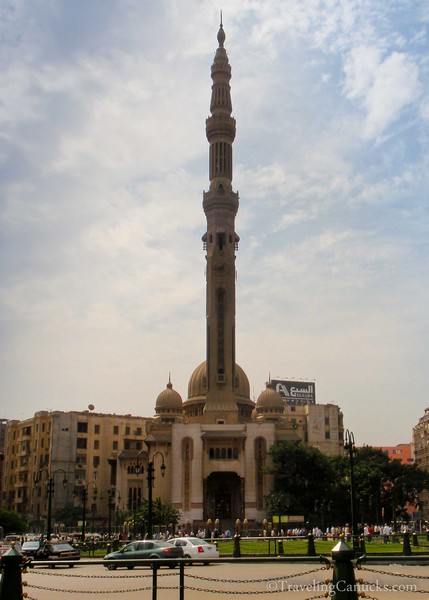 It’s no surprise that the largest city in the Arab World is home to some pretty amazing mosques. While navigating the congested streets of Cairo in search Ramses Station (Cairo’s main railway station) we stumbled on this incredible mosque in the chaotic Ramses Square (Midan Ramses).

Almost on queue, we both stopped walking and snapped our necks back as our eyes climbed to the top of the tower. We couldn’t believe how tall it is!

We later learned that Al-Fath Mosque has the highest minaret in Cairo and it’s one of the largest and most famous mosques in Egypt’s capital city.

The photo does a good job showcasing the height of the tower (when compared to the people walking in front of the mosque), but it’s hard to fully appreciate its scale and dominance without including the city skyline (we took this photo from the opposite side of the square and it still wasn’t far enough away). It’s quite the sight!

Have you visited Cairo before? What were some of your highlights?
Share you experiences in the comments section below, we’d love to read about it!