With summer just around the corner, we can’t think of a better time for the next installment of our popular series about memorable moments drinking beer around the world.

The beer-tastic series continues with its 12th edition, serving up ten more unforgettable moments from around the world. We sampled this tasty beer at the Palm Springs Aerial Tramway mountain station in Palm Springs, California. This photo was captured on our first family trip with Baby B, so it’s easy to see why this beer drinking moment is memorable for us. That, and the fact that this is one of our favourite pictures of Baby B. Seriously, how priceless is that expression?! It’s like he’s trying to use Jedi mind tricks to pull the beer closer to him.

The beer verdict – Hoppy and aromatic, light tasting yet solid body. We would definitely order again. We give it 8 out of 10 We spent the 2009 Christmas holiday season in Europe, exploring Christmas Markets and visiting family in Reil (a small village in the Mosel River Valley of Western Germany). We found this bottle of Weissbier at the local corner store and enjoyed it with family by the warm fire, while playing bowling on the Nintendo Wii. Having spent 11 months on the road at that point, it was great to enjoy some downtime with family in the quaint German countryside.

The beer verdict – Sweet, citrus flavour with hint of banana. Full, cloudy body. Great beer – give it a try. We give it 9 out of 10 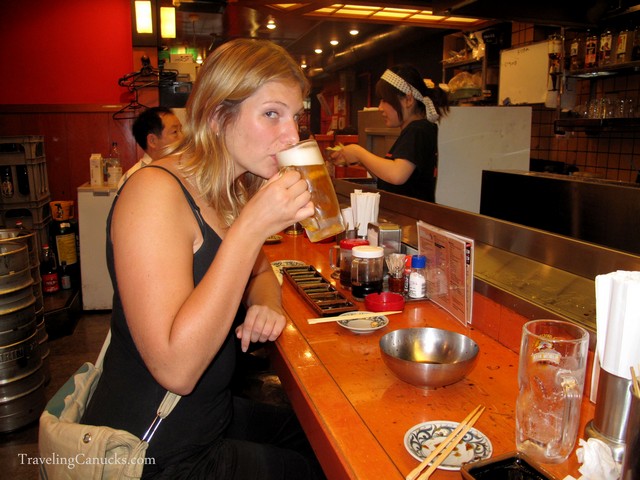 After a full day of temple exploring and sightseeing in the ancient Japanese city, we found this fantastic restaurant that specializes in Yakitori. Cold pints of Kirin beer were on special during happy hour, so we took full advantage and indulged in a few. Not surprising, this lead to more Yakitori, followed by more pints of Kirin – it was a great day in Kyoto!

The beer verdict – Light and refreshing, but limited on flavour. It’s a popular beer worldwide, but it’s average. We give it 7 out of 10 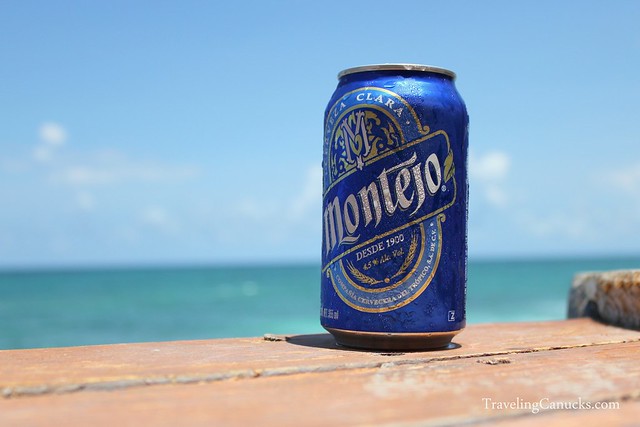 This refreshing cerveza was enjoyed on the private deck of our fantastic beachfront villa after exploring the ruins of Tulum. With unobstructed views of the sparkling Caribbean Sea, its no surprise that this unforgettable moment made the list. When we think of tropical paradise, images of bright sunshine, turquoise water and cold beer come to mind. This moment had it all!

The beer verdict – Light and refreshing, plenty of carbonation. Smooth, easy drinking. We give it 7 out of 10 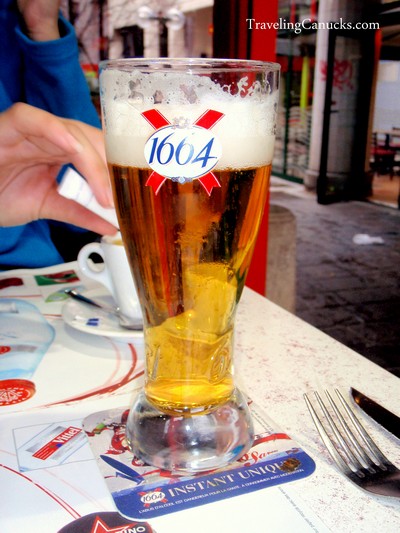 Traveling around France via train during the Christmas holidays can be stressful. Especially when a massive snowstorm hits, paralyzing the rail network for two days. We had just finished a week of epic snowboarding in the French Alps and were trying to get back to Paris, but it just wasn’t happening. So, we decided to roll with the punches and spend the afternoon in Lyon, which meant lots of eating and drinking!

The beer verdict – Heavily carbonated, smooth and crisp. Good, but not great. We give it 6.5 out of 10 We try a lot of local craft beers in British Columbia, so it’s not easy narrowing down the field. In an effort to include more Canadian beer in this series, we’re going to start adding some of our BC favourites. This tasty beer was enjoyed while on a weekend getaway to Parksville, a popular beach community on the east coast of Vancouver Island. Sunny afternoon + large open patio = good times on Vancouver Island!

The beer verdict – Malty, earthy hops, flavourful, solid body with smooth finish. We give it 7.5 out of 10 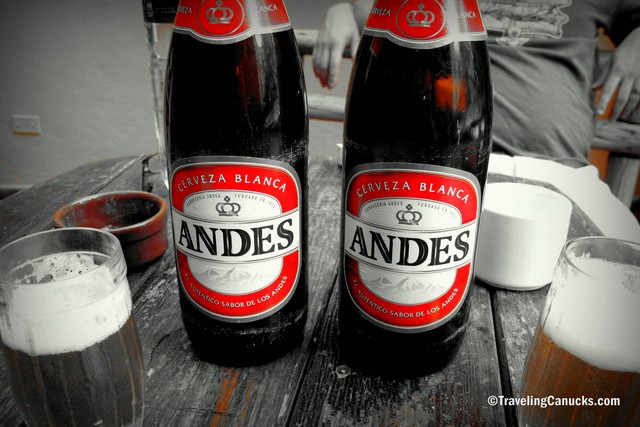 If you’ve been following this series, you’ll know that we’re not the biggest fans of South American beer. We’re not too picky when it comes to beer (as long as it’s served cold), but you won’t find us purchasing imported South American beer any time soon.

That said, we thoroughly enjoyed these large bottles of Andes at our hostel in Mendoza, Argentina. This moment stands out because we were traveling in Argentina with great friends from Toronto. Nothing beats cold beer on a rooftop patio with longtime friends while traveling in a foreign country!

The beer verdict – Light, crisp and refreshing. Like most beer in South America, it’s nothing special. We give it 6.5 out of 10 We sampled this can of beer on the last night of our 2009 around the world adventure. It was a surreal moment to know that the 12-month journey was coming to its end. We were happy to be going home to see family and friends, but sad that the life changing adventure was over. The ‘original bitter’ was appropriate for that ‘bitter sweet’ moment.

The beer verdict – Sweet and malty bitter, full body with great colour. Tasty. We would order it again. We give it 7.5 out of 10 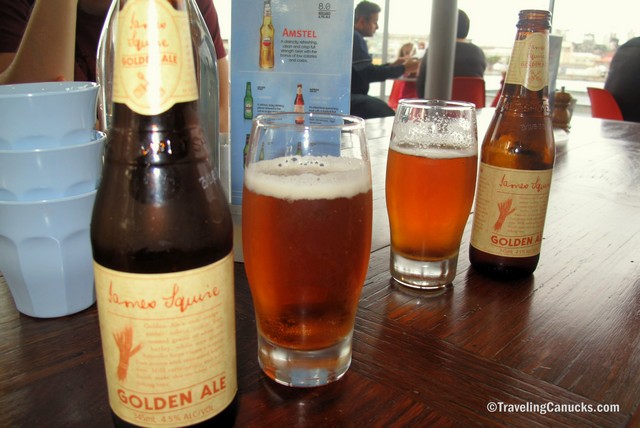 While exploring Sydney’s infamous Opera House and neighbouring Royal Botanic Gardens, we were caught in a torrential downpour. Seeking cover from the relentless rain, we found this cute waterfront bistro just outside the gardens. It was the perfect moment to try some Australian craft beer. Fortunately for us, this beer did not disappoint.

The beer verdict – Great amber colour, light malt and balanced floral hops. Delicious. One of the better beers we tried in Australia. We give it 8.5 out of 10 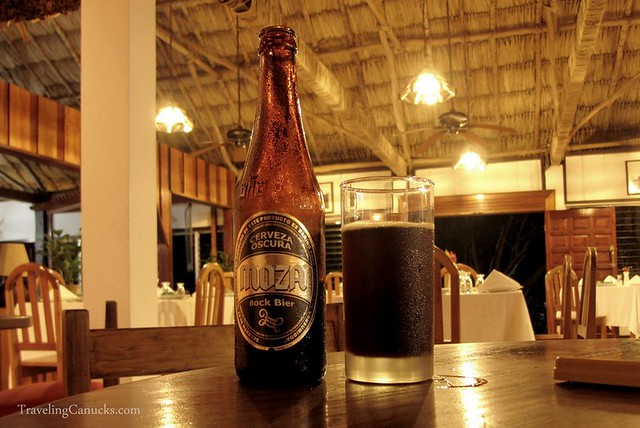 Our trip to Guatemala centered around the legendary Mayan Temples and Pyramids found in Tikal National Park. In order to catch both a sunrise and sunset over the pyramids, we decided to spend a couple nights directly in the park at the Jungle Lodge. To our surprise, we appeared to be the only guests in the lodge. As the photo illustrates, we had the entire restaurant (and lodge) to ourselves. Guatemala is not known for its selection of beer, so I was curious (and delighted) to see a beer other than a light lager.

The beer verdict – Dark in colour, but light on body and taste. Not bad. It’s better than its local competition, but I probably wouldn’t order it again. We give it 6 out of 10