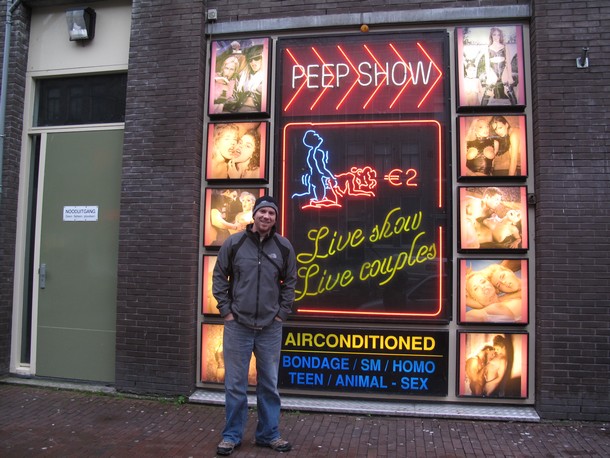 I’m going out on a limb and assuming you’ve heard about Amsterdam’s seedy Red Light District. If you have no idea what I’m talking about, read more here.

Basically, it’s a strip in Amsterdam that has a high concentration of prostitution and sex-oriented businesses, such as sex shops, strip clubs, adult theaters and brothels.

Okay, so I couldn’t help myself. I wanted to take a photo of the provocative sex workers on display in the red lit windows, but it just didn’t feel right. You can’t help but feel uncomfortable walking down the strip and having women try to seduce you as you walk by. It’s a strange feeling (at least it was for us).

At first, you think its a manikin in the window, like most shopping districts. But then the manikin moves and winks at you, which is quite freaky the first time it happens. Some sex workers have fun with it, others take it very seriously and clearly aren’t amused by said dorky tourists.

Though its not your typical tourist attraction, it’s certainly a place worth visiting if you find yourself in Amsterdam.

Check out these other “Photo of the Week” posts:

Have you visited Amsterdam’s Red Light District before? What did you think?
Share you experiences in the comments section below, we’d love to read about it!