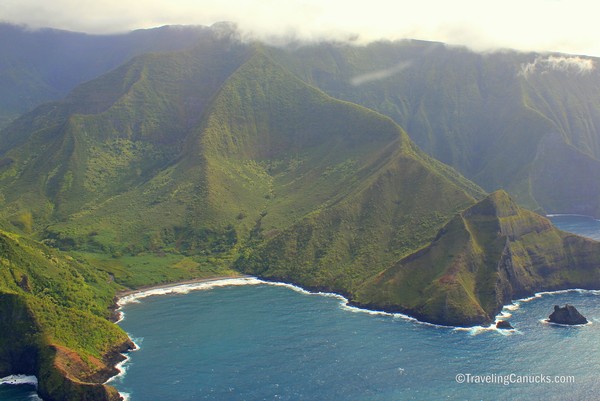 Spectacular views of Molokai from a Helicopter

Butterflies fluttered in my stomach as the helicopter made its way across the ocean channel towards the lush Hawaiian island of Molokai. There was a moment where I felt like I was in the movie Jurassic Park, eagerly flying through light clouds towards the mysterious volcano island.

The setting is truly magnificent. Untouched. Unspoiled by man.

Our pilot Emery guided the helicopter past Hawaii’s tallest waterfall towards the dramatic sea cliffs, maneuvering the aircraft so his passengers could snap a postcard picture. I was shooting video at the time, so unfortunately I don’t have any good photos of the incredible waterfalls (but I’ll be sharing the video after I edit the footage).

As we continued along the northern shores of Hawaii’s fifth largest island, Emery tilted the helicopter so that we could witness the breathtaking landscapes pictured above.

No buildings or resorts. No signs of human activity. Just rugged, pristine wilderness that stretches for miles in each direction.