With summer in full swing and hitting the home stretch, we can’t think of a better time for the next installment of our popular series about memorable moments drinking beer around the world.

As lovers of beer and travel, we try our best to take a photo of every beer that we sample while on the road, making for an awesome photo collection with over 400 different types and brands of beer.

The beer-tastic series continues with its 13th edition, serving up ten more unforgettable moments from around the world. 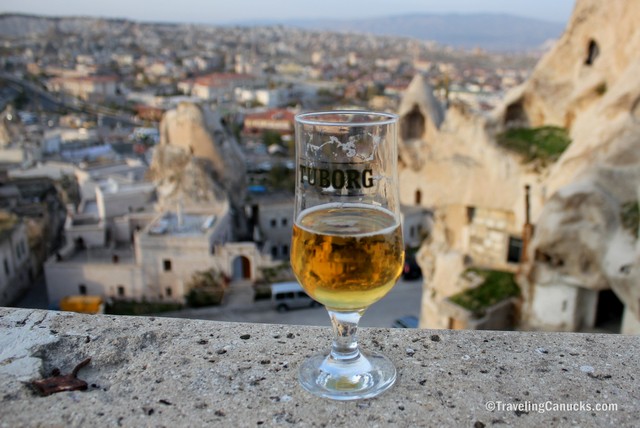 This special beer drinking moment was captured whilst enjoying a sunset on the rooftop patio of a cave hotel in the town Goreme. If there is one place that we recommend you visit in Turkey (and the world for that matter), it’s Cappadocia and the Göreme Valley. Its famous for its peculiar rock formations, colourful canyons and magical fairy chimneys, making it one of Turkey’s biggest tourist attractions.

The beer verdict – Served flat and warm, this particular glass of beer was nothing special. However, we have enjoyed Tuborg on many other occasions. We give it 5.5 out of 10 We didn’t have much luck with weather when we visited the Chilean coastal city of Valparaiso, so we found ourselves spending a few afternoons playing cards and sampling a variety of South American beer. Although we really didn’t get to experience the vibrant city and its culture, we did have a lot of fun relaxing and enjoying our time together. Sometimes the most memorable travel moments are the ones where you just sit back and let the day take you where it wants to go.

The beer verdict – Sweet and tangy with weak body. Like most beer in South America, neither were very good. We give them both 5 out of 10 After an epic day of outdoor adventures in Queenstown, we picked up this six-pack of seasonal beer from a local grocery store. We cracked open a couple of these beers and enjoyed them in our hostel room while reflecting on the epic helicopter tour that had us landing on a snow-capped peak in Remarkables mountain range – here is a photo from that heli-tour.

The beer verdict – Fruity and sweet with solid finish. I’m not typically a big fan of fruity beers, but this one was decent. I would probably buy it again. We give it 6.5 out of 10 Over the past few years the Pacific Northwest has really stepped up its game in the micro-brewery scene. There are dozens of great breweries producing a variety of tasty craft beers, many coming out of Victoria, British Columbia. We enjoyed this pint while on a delicious food journey at LURE Restaurant, a waterfront restaurant located in the Delta Ocean Pointe Resort in downtown Victoria.

The beer verdict – Great amber colour, hoppy with hints of caramel and malt. Flavourful with full body. We give it 7.5 out of 10 While wandering through an outdoor market in Athens, we decided to load up on various meats, cheeses, olives, pickles and flat-breads and proceeded to set up a full spread in our hotel room. Of course, no impromptu hotel party can be without a selection booze, so we picked up some local wine, German beer and Ouzo (an anise-flavored aperitif that is a big part of the Greek dining experience). It was a fun evening!

The beer verdict – Standard German pilsener: light, well-hoped and bitter. We give it 6.5 out of 10 Venice is a city like no other. Its tight river canals and historical architecture attracts millions of visitors, and for good reason – it’s a very cool city. It’s also quite expensive. Because we visited the city while backpacking around Europe, we we’re on a tight budget. So we opted to save a few Euros and drink a couple beers at our hotel room. We didn’t find a good selection of Italian beer at the store so we grabbed a couple of these German pils instead.

The beer verdict – Light with good carbonation, decent hops and slightly bitter. We give it 6.5 out of 10 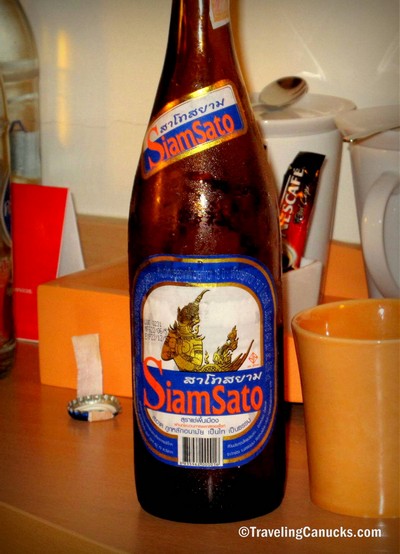 We love Bangkok. The smells, the sounds, the flavors, the smiles, the chaos. Whenever we book a hotel in Bangkok for a few days we make sure to stay within walking distance of outdoor markets so we have easy access to street food and interesting restaurants. We enjoy most Thai beers so we assumed we’d enjoy a bottle of SiamSato. Boy, were we wrong! Although it typically sits on the beer shelf in the convenience stores (and it looks like a beer bottle), this is no beer. Far from it. It’s actually a sour rice wine, and it’s not good. Consider yourself warned…

The beer verdict – Awful. Not good – stay away if you’re looking for beer. But it is alcohol, so it at least gets one point for that. We give it 1 out of 10 Cold refreshing beer is the perfect companion to sunshine and open-aired restaurant patios, so it’s no surprise that this locally crafted Hawaiian beer was a big hit on our trip to Maui. This frosty pint of deliciousness was enjoyed at the poolside bar of the Fairmont Kea Lani in Wailea. What more needs to be said?

The beer verdict – Refreshing, well-hopped, good carbonation, solid body with great finish. We give it 8 out of 10 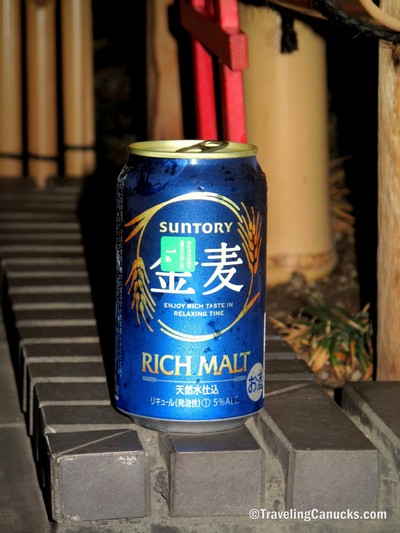 Being Canadians, we are forced to deal with unnecessary government regulations that restrict beer sales to designated liquor stores. This means that we cannot purchase beer from a grocery store or convenience store (like the rest of the world). So you can imagine how excited we were to purchase cold beer from a vending machine in Kyoto, Japan. Yup, you heard correctly – cold beer from a street vending machine! It’s one of the many reasons why Japan is one of our favourite countries in the world.

The beer verdict – Strong malty flavour, sweet, hoppy, aromatic with clean finish. We give it 6.5 out of 10 We sampled this 6-pack of amber ale on our first international family trip with Baby B. Baby B was only 3 months old at the time, so this trip to Palm Springs was all about rest and relaxation. We spent days hanging out by the pool, sampling American beer and working on our sunburns. Mission accomplished.

The beer verdict – Full body, well hoped, sweet and malty with caramel flavours. Light drink-ability for an ale. We give it 8 out of 10