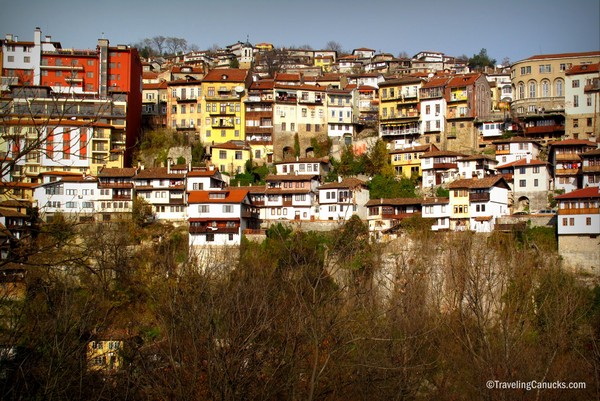 We captured these traditional renaissance houses while wandering around the Old Town of Veliko Tarnovo, one of Bulgaria’s oldest and most interesting towns. The buildings literally consume the hills that surround the Yantra River, combining a mixture of communist and modern architecture.

The above photo was taken from the dominating Asenevtsi Monument, dedicated to the former kings of Bulgaria when Veliko Tarnovo was declared the capital of the Second Bulgarian State. The Asenevtsi Monument is the tall pointy statue and platform pictured below.

To give you further perspective, the below photo was captured from a lookout point located somewhere in the above photo – if that makes any sense?! Check out these other travel photos from Europe:

Have you visited Veliko Tarnovo? What did you think?
Share you experiences in the comments section below, we’d love to read about it!