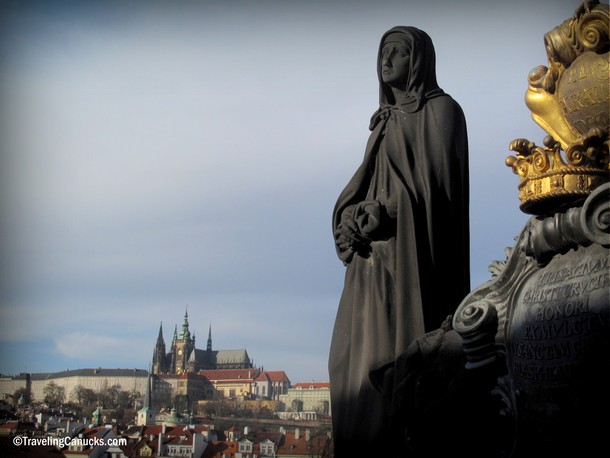 This week’s travel photo captures one of Europe’s most famous bridges – the Charles Bridge.

The medieval cobblestone bridge is famous for its 30 baroque-style religious statues that line both sides of the historical bridge. It was built in the 15th century, with most of the statues erected between 1683 and 1714 (according to wiki).

I took a lot of photos that overcast winter morning, but only a few turned out well. I was on a Sepia and Colour Accent kick during that trip (don’t ask why, I’m still kicking myself – this was before I learned how to use photo editing software – doh!) so most of the photos suck.

But I like this one. I like the composition with Prague Castle in the backdrop. There’s even a little colour in the sky.

I did some digging online to learn about this statue and bridge, but I had a tough time finding this particular statue. The reason I was having trouble was because it’s actually a part of a much bigger, much more important statue – the Statuary of the Holy Crucifix and Calvary. Ironically, it’s said to be one of the most historically interesting sculptures on the bridge.

Have you visited Prague? What was your highlight?
Share your experiences in the comments section below, we’d love to read about it!