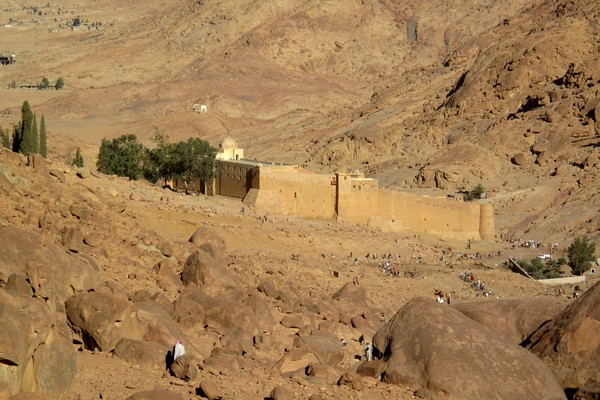 This week’s travel photo was captured while descending from the summit of Mount Sinai, an iconic biblical destination said to be the place where Moses received the Ten Commandments from God. At the foot of the mountain lies the ancient Saint Catherine’s Monastery.

The official name of this UNESCO World Heritage Site is the Sacred Monastery of the God-Trodden Mount Sinai, but it’s most commonly referred to as Saint Catherine’s Monastery. The Greek Orthodox monastery, which was built between 548 and 565, is one of the longest-running Christian monasteries in the world. It’s also said to be supposed location of the Burning Bush.

We hiked throughout the night in order to witness the sunrise over the sandstone mountains of Egypt’s Sinai Peninsula. It’s a popular pilgrimage site for Jews, Christians and Muslims, as evidenced by the never-ending stream of hikers that can be seen funneling towards the monastery.

Have you visited Egypt? What did you think?
Share your experiences in the comments section below, we’d love to read about it!