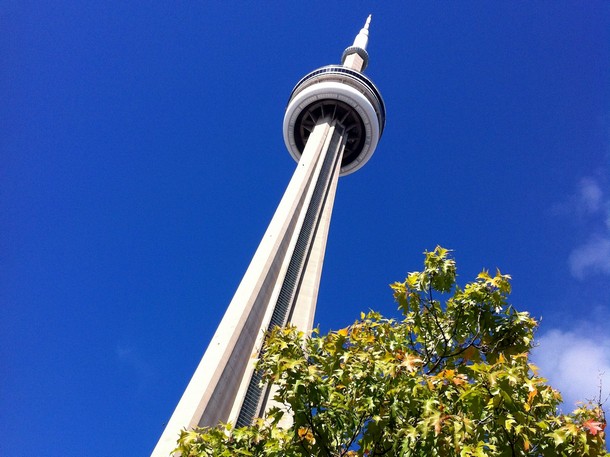 Toronto Blue Jays back in the Postseason

Two weeks ago I (Cam) traveled from Vancouver to Toronto to watch the Toronto Blue Jays play in two Major League Baseball postseason games. Now, for those of you that don’t follow sports, you might not understand why I would spend that kind of money (flights, hotel, tickets and adult beverages) just to watch a couple of baseball games.

Sometimes I ask myself the same question. But these two games were a big deal. Well, at least for me… and the rest of Jays Nation that have been starving for some postseason action for as long as I can remember. 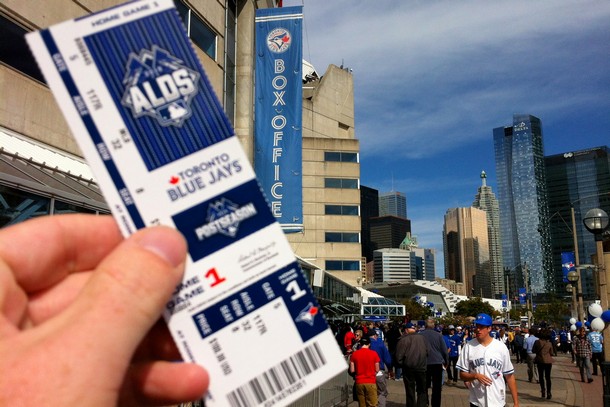 The Blue Jays had not made the postseason in 22 years!

Think about that for a moment. 22 years! To put that into perspective, the last time the Toronto Blue Jays were in the playoffs Bill Clinton was just elected President of the United States, the first Jurassic Park movie was in theaters and Canadian popstar Justin Bieber wasn’t even born yet. Also, Google, Facebook and Twitter did not exist, mobile phones were the size of brick and the Internet was just becoming available to the public.

That is a ridiculously long time between Postseason appearances, which is why it was such a big deal for the Blue Jays to finally host a game at the Skydome (it’s actually called Rogers Centre now, but it will always be Skydome to me!). 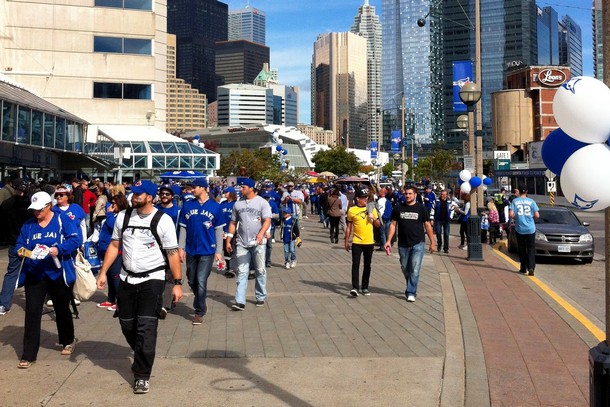 I always try to catch a sports game when I travel.

I’m a big sports guy but it goes beyond sports. You can really get to know a city and it’s people by attending one of its local sporting events. Earlier this year, I was fortunate to check off a life goal by watching a baseball game at the legendary Fenway Park in Boston. 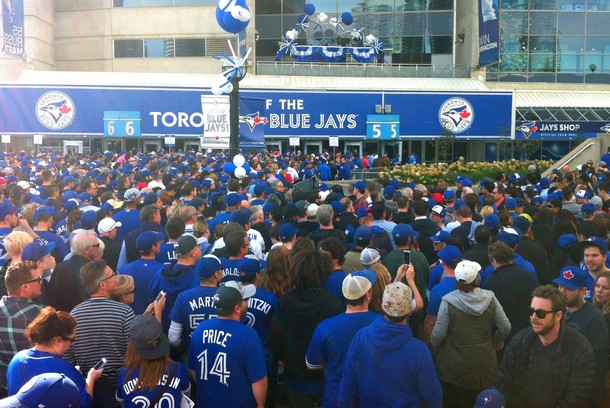 Why now? Why the Toronto Blue Jays?

This trip began with a few optimistic text messages sent to my oldest friend who still lives in Toronto. At the time, I said “if the Jays make the postseason I’ll fly home to watch the first game”.

I didn’t actually think the Blue Jays would make the Postseason, but it was fun to dream.

I grew up in the suburbs of Toronto, so I’ve been a Blue Jays fan for 25+ years and have watched countless games at the Skydome. It’s been at least 15 years since my last baseball game, although I did get to tour the stadium a few years ago while attending a travel blogger conference that was hosted in Toronto. 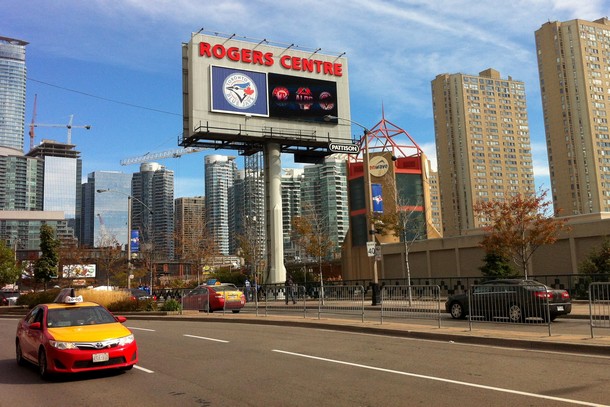 After some aggressive trades at the deadline, the Blue Jays continued to win games and slowly climbed up the division standings. Eventually they took over the New York Yankees for top spot, solidifying them as legitimate Postseason contenders. Could this finally be the year?

As the Blue Jays inched closer to the postseason, I realized this unlikely trip to Toronto might actually happen.

So I started to look at flight options. The problem with booking travel for games in the postseason is that the date and times are not confirmed. A lot can happen to influence these dates/times, so it’s a risky play to book flights and hotels before the schedule has been decided.

For example, if the Blue Jays win their division, they get the first two games at home. If they don’t, they get the 3rd and 4th game at home. Choose wrong and I’d be traveling all the way to Toronto to watch the game at a local sports bar. That would have sucked. 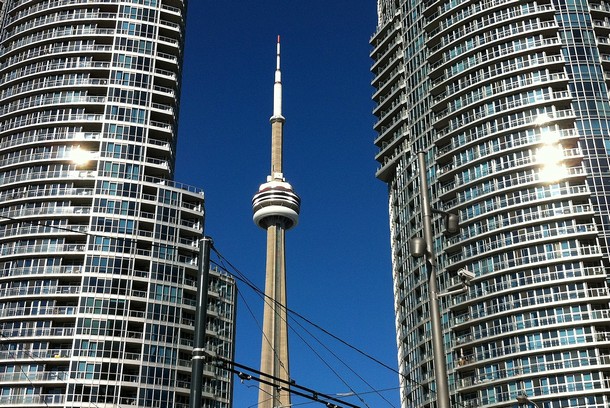 As the days passed, the price for flights continued to rise. I needed to make a decision, and fast. The games would start in less than two weeks. At the time of booking, normal flights from Vancouver to Toronto were priced around $700, which is pretty expensive for a domestic flight.

To save money, I checked to see if I could find a flight by redeeming some of my Aeroplan Miles. Because I was booking with very short notice (9 days before departure), there weren’t any flights available with the Fixed Mileage option.

We’ve been working with Aeroplan as brand ambassadors for almost 4 years now, so we’ve collected lots of miles over the years, which certainly helped make this trip a reality. One of the perks to running this travel blog. 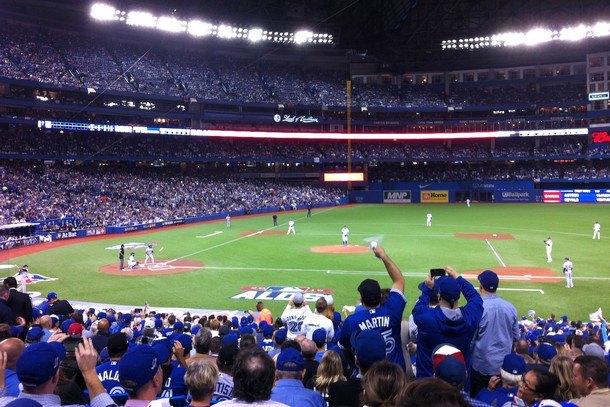 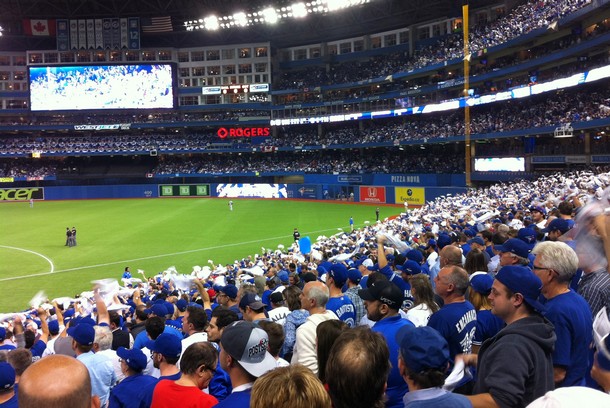 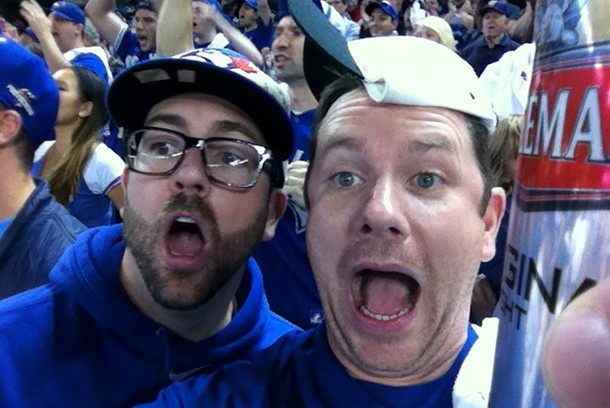 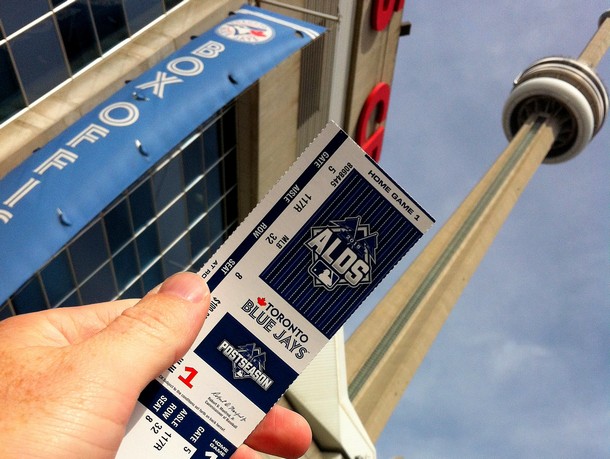 My friend was able to pull some strings to score us some fantastic seats for Game 1 of the ALDS (American League Divisional Series) against the Texas Rangers. We sat 32 rows behind first base, giving us an awesome view of the game.

The atmosphere inside the stadium was absolutely insane.

I’ve never been to game with that level of intensity. The dome roof was closed, so all of the sound was trapped inside, amplifying it to deafening levels. The place went crazy after every pitch, every hit, every out. It was incredible.

Unfortunately, even with a late 9th inning drive, the Blue Jays came up short and lost Game 1. Even with the loss, it was an amazing experience, one that I’ll remember for many years to come. The next morning, shortly after breakfast, we made our way back to the stadium for Game 2. It was an early afternoon game with a 12:45 start time, which meant we were in the stadium before 12:00. We may have indulged in a few too many adult beverages the day before, so we were struggling a little bit, but it didn’t take long to get it the festive spirit once again.

Like the game before, the stadium was jam-packed with insanely loud fans swinging white towels. It was awesome.

The above photo gives you an idea of where our seats were for Game 2. The seats weren’t as good as Game 1, but we weren’t complaining. To be honest, I couldn’t believe I was able to attend 2 postseason games in a row. I had to pinch myself. 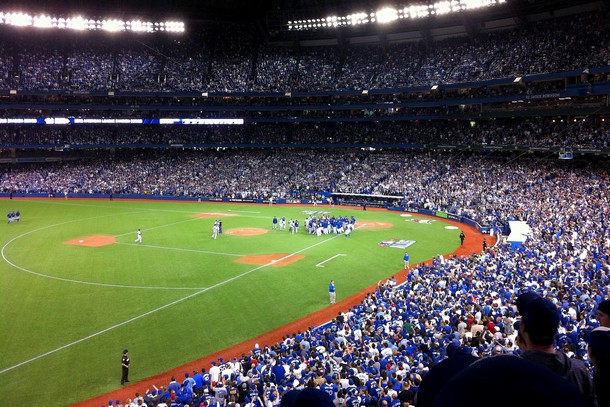 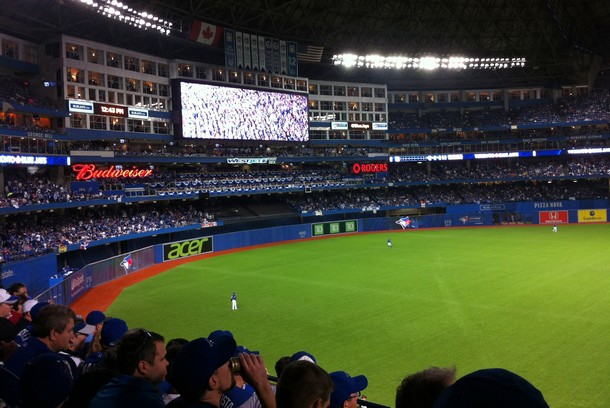 Sadly, the result of Game 2 was the same as Game 1. The game went into the 14th inning, which was the longest postseason game by innings in Blue Jays history. It was a nerve-raking game from start to finish. We left the game disappointed with the result but thrilled to have had the opportunity to witness this historical game.

The Blue Jays went on the win the next 3 games to take the ALDS and move on to the ALCS (American League Championship Series), which they lost to the Kansas City Royals in 6 games. 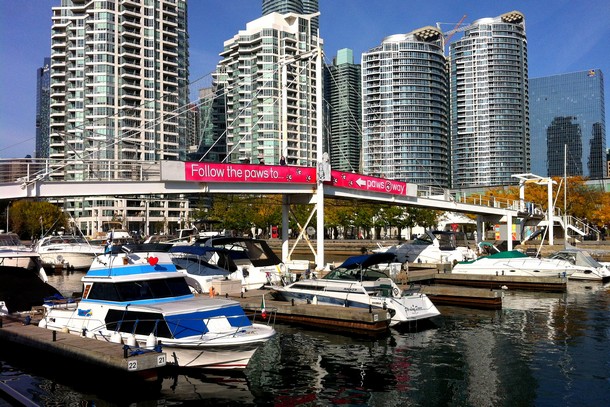 Where did I stay?

Earlier this year, we did some work with Radisson hotels. As part of the compensation, we received four nights of complimentary accommodation at any Radisson or Club Carlson property in Canada. I completely forgot about these coupons until Nicole reminded me.

Fortunately, luck was on my side and I was able to secure a room even on short notice. It was as if the baseball gods wanted me to have this experience!

Note – if you’re looking to book a hotel, here’s a link for the latest promotions from Radisson. 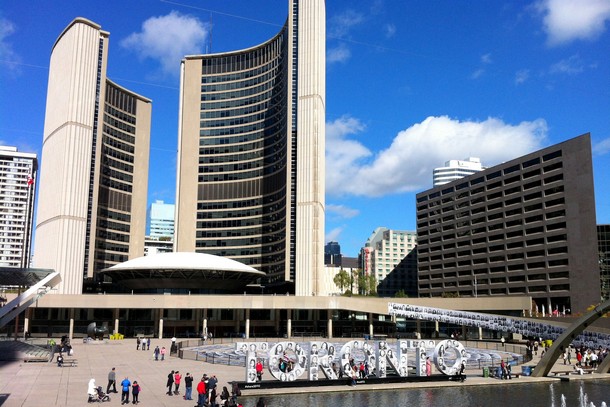 Every time I visit Toronto it feels different.

It’s always fun to return to the place where I grew up, though it messes with my head because of how much time has passed and how much I have changed over the years. It’s growing at a similar pace to Vancouver, so the skyline is constantly changing. I hardly recognized the waterfront area. It must have added 25 new buildings in the past 10 years alone.

It was so great to visit Toronto and experience this historical sporting event with my oldest friend. It was so much fun to watch the city, and country, embrace its Major League Baseball club and finally get a taste of postseason action after 22 years of disappointment.

Let’s hope this is the first of many more postseason appearances to come!

Have you traveled specifically for a sporting event? Where did you go?

Share your experience in the comments section below. We’d love to read about it!