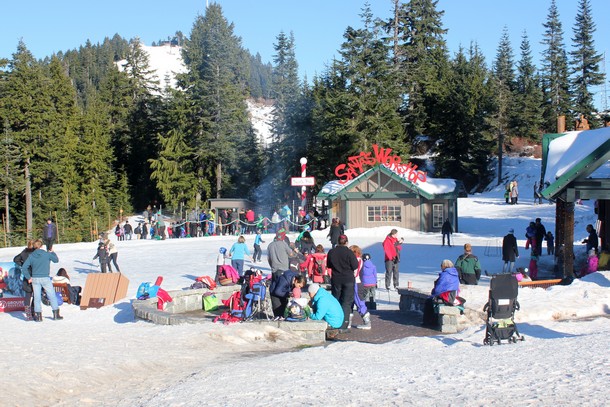 We’ve always enjoyed the Holiday Season and try to participate in as many events as we can squeeze in. The holidays have become even more special in recent years because we now get to create new traditions with our young boys.

Our boys are now fully aware that this is a special time of year. They’ve enjoyed watching the classic Christmas cartoons like Frosty the Snowman, Rudolf the Red-nosed Reindeer and, of course, that nasty Grinch.

It’s fun to watch their imaginations run wild. Questions about Santa and Rudolf have become a daily routine. The boys even have their own little Christmas tree that they decorated with ornaments of their choosing. It’s quite comical actually – the bottom is loaded with decorations and the top is empty, because they can’t reach that high. 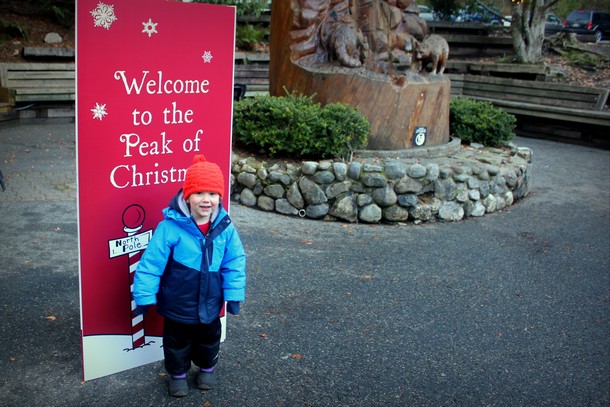 The Peak of Christmas

We visited the mountain on the first weekend of the event, so we knew we were running the risk that some of the activities might not be ready due to limited snow. It’s been cold in Vancouver over the past few weeks, so the local mountains have a decent snow base already. We’ve been telling our boys that winter has finally arrived but they aren’t convinced because there’s no snow on the ground in the city.

For them, winter means snow.

Braydon keeps asking us, “when can we play in the snow”. He remembers our winter trips to Jasper, Alberta and Big White Ski Resort last season and desperately wants to build a snowman and go for a ride on his shiny red sled. 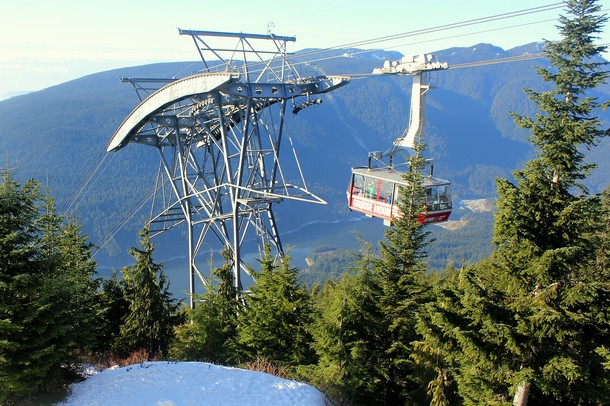 That’s one of the many benefits to living in Vancouver — it rarely snows in the city, but if you want snow, all you have to do is drive 15 minutes to the local mountains.

For those of you unfamiliar with Vancouver, there are 3 separate ski areas on the North Shore Mountains, all within a 15-20 minute drive from the downtown city center (Grouse Mountain, Cypress Mountain and Mount Seymour).

An added bonus was that the day before our visit to the Grouse Mountain we received a package from our friends at Columbia Sportswear with new snowsuits and winter gear.

It was as if Santa came a month early! 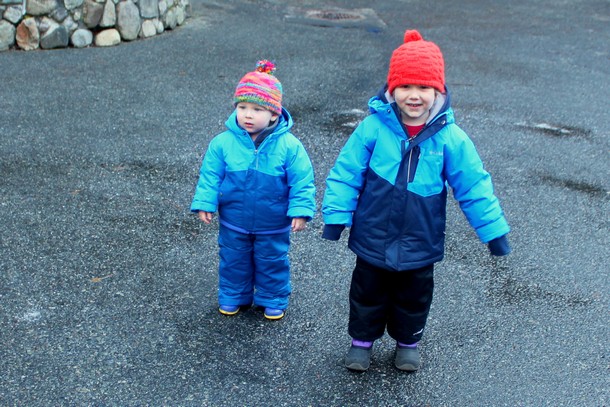 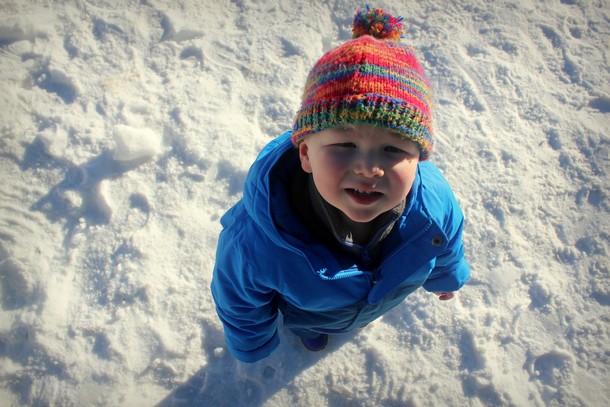 We arrived at Grouse Mountain early since we know activities like this usually get busy around noon. We also have to plan around Connor’s nap time, which usually happens around 1:00 PM these days.

We arrived at the base of the mountain around 9:30 AM and boarded the Skyride Tram, North America’s largest aerial tramway system. The ride takes about 10 minutes and it provides spectacular views of Vancouver and the Pacific Ocean. It’s an experience all on its own, regardless of the season.

Try to grab the window seat (there’s only a couple available) or position yourself beside a south facing window. To do this, you’ll need to be one of the first people to board, so get strategic when on the loading platform. It’s sometimes easier said then done. The trams can fit about 100 people, so it can get quite cozy in there.

The tram is mostly standing room only and it can get quite full, especially at peak hours, so you may get packed in the middle, which means you won’t get much of a view. 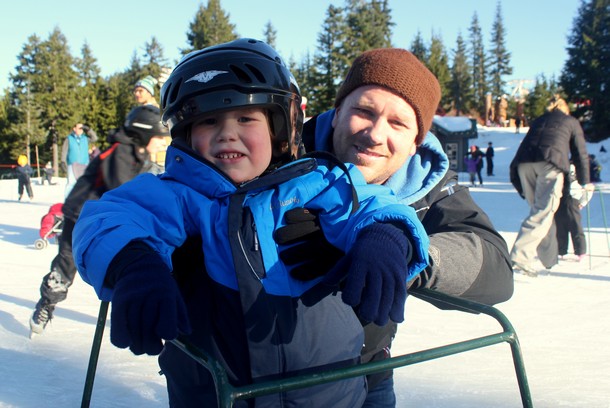 Outdoor ice skating on the top of a mountain

There’s something very Canadian about ice skating outdoors on an frozen pond, especially one that’s located on the peak of a mountain!

We took Braydon ice skating outdoors last year while in Jasper, so he was somewhat familiar. The rink isn’t very big in comparison, but, at over 8,000 square feet, it’s large enough to get some good turns. Braydon is still quite wobbly and has a hard time standing up, but it’s great to see him trying new things. It’s always a good sign when says, “I want to do that again tomorrow”.

Connor is still too young to ice skate, so he’s got another year on the sidelines before he’s ready to give it a shot. The cost for the ice skate rentals with helmets was approximately $20.00. 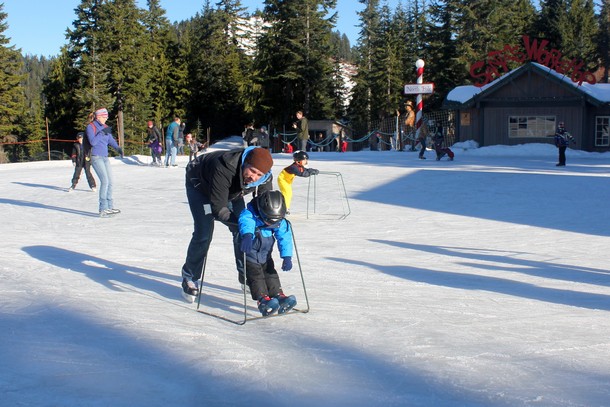 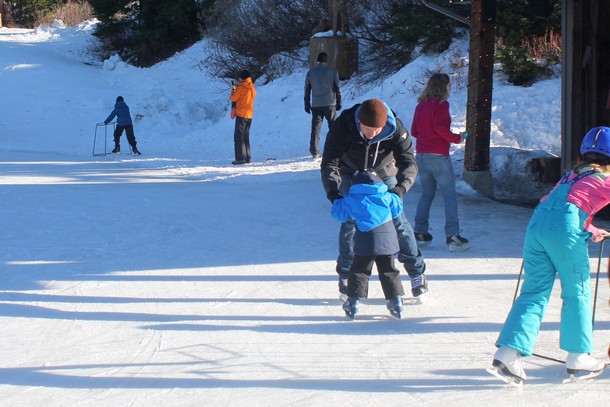 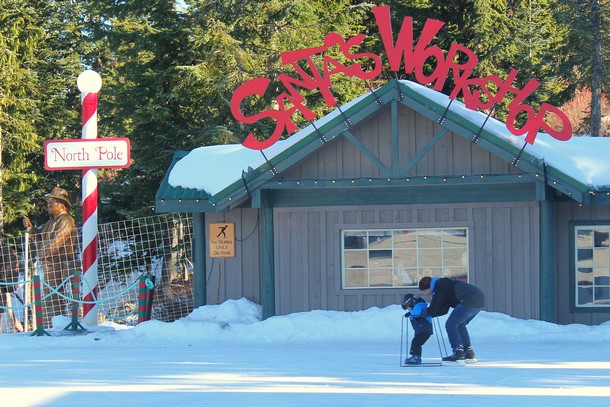 Visit with Santa at his mountain workshop

The boys really wanted to see Santa while on the mountain. To do this, we had to get a time slot booked ahead of time. Santa’s Workshop doesn’t open until 11:30 AM and Santa didn’t actually start seeing kids until 12:00 PM, so we had a couple hours to wait.

As I watched Cameron and Braydon skating, I could see the line to visit Santa growing. People were starting to line up about an hour before Santa arrived. I realized our visit with Santa may be in jeopardy. We decided to do the other activities first and return after the line went down.

Unfortunately, when we returned to Santa’s Workshop about an hour later, the earliest time we could see Santa was 2:00 PM, which was well past Connor’s nap time.

Sadly, this visit to see Santa was unsuccessful. 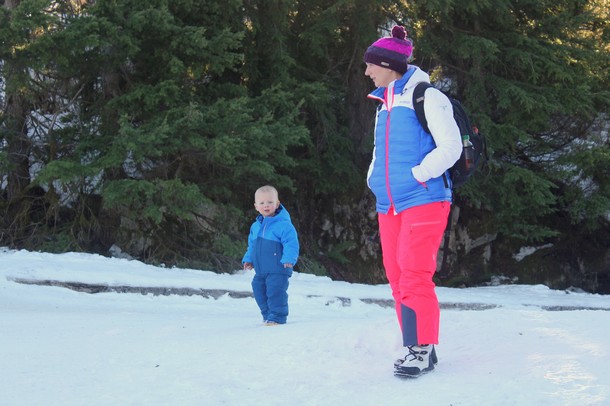 While the boys skated, I went in search of the sleigh rides and sledding. Unfortunately, both were still closed due to the low snow pack. Disappointing, but that’s the risk of visiting the mountain so early in the season. The reindeer had not yet arrived, but we did get to see this gorgeous white owl

After ice skating, we went inside the Peak Chalet to check out the indoor activities hosted during the Peak of Christmas, including the Children’s Gingerbread Village, Craft Station, Elf Headquarters and Christmas movies playing in the Theater in the Sky. 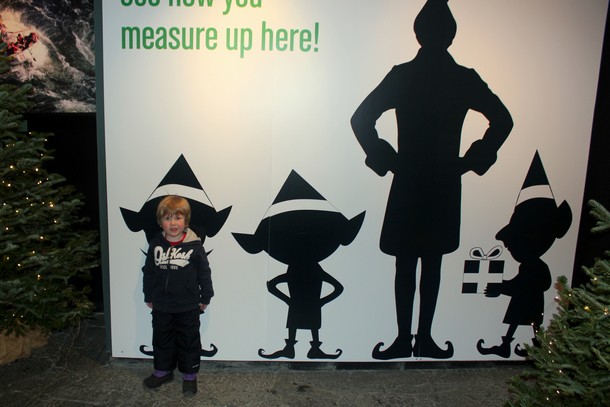 Elf Headquarters. Braydon is the size of an elf. This was Braydon’s first time mailing a letter to Santa. Big moment. Connor also wrote a letter to Santa, with Mommy’s help. After lunch in the Peak Chalet we went back outside to play in the snow. We attempted to build a snowman but the snow was too crunchy to pack. Instead, Braydon found some small hills to slide down in his new snowsuit. This was one of his highlights from the day.

It’s funny how the simplest activities are usually the most memorable. 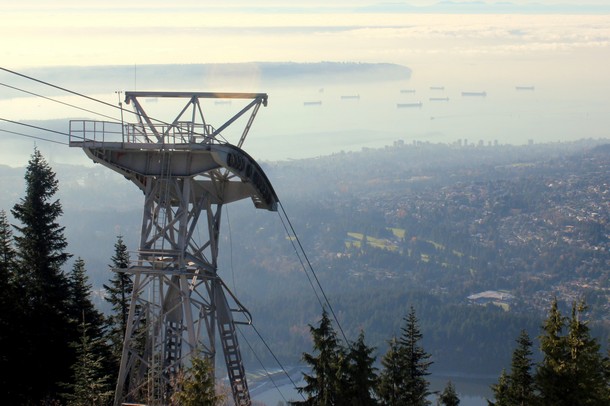 Disclosure: We were provided family passes courtesy of Grouse Mountain.