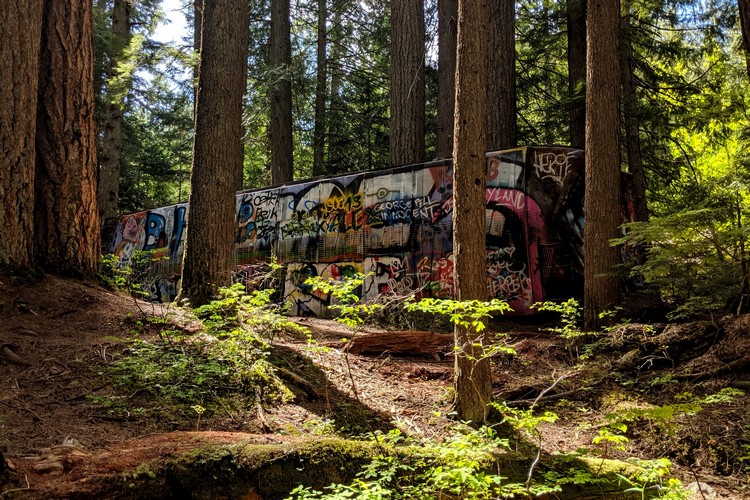 Tucked away in an old-growth forest, hidden between train tracks and the Cheakamus River, the Whistler Train Wreck site has quietly become a popular Whistler tourist attraction.

The Train Wreck is home to several decaying box cars that were abandoned after a crash that occurred in 1956. Train derailments were not uncommon back in the 1950’s, however little was known about this particular crash until recent years.

Now, covered with layers of bright graffiti, these rusty old box cars have transformed into a unique outdoor art gallery. The mangled box cars are scattered through the crash site, with one clinging to the edge of the Cheakamus River and others wedged between giant old growth trees.

This unusual Train Wreck site has a party-in-the-woods vibe about it. It’s evident that this secret location is an overnight hang out spot for locals seeking a secluded place to howl at the moon.

Here are photos of the Whistler Train Wreck. Scroll to the bottom to watch video footage of the train crash site. 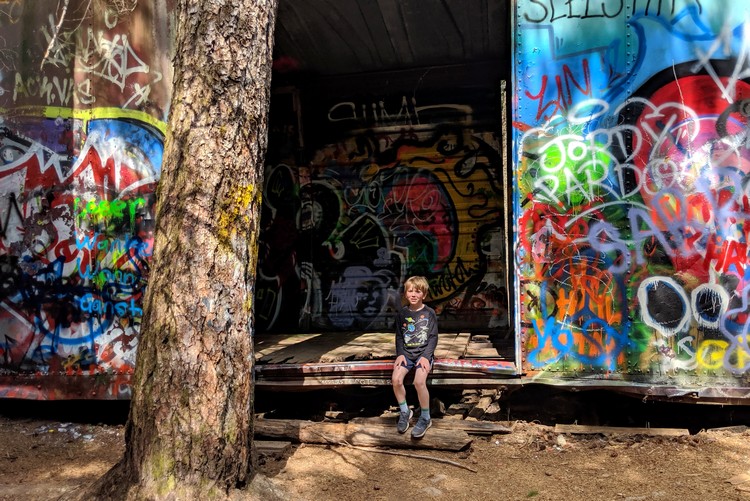 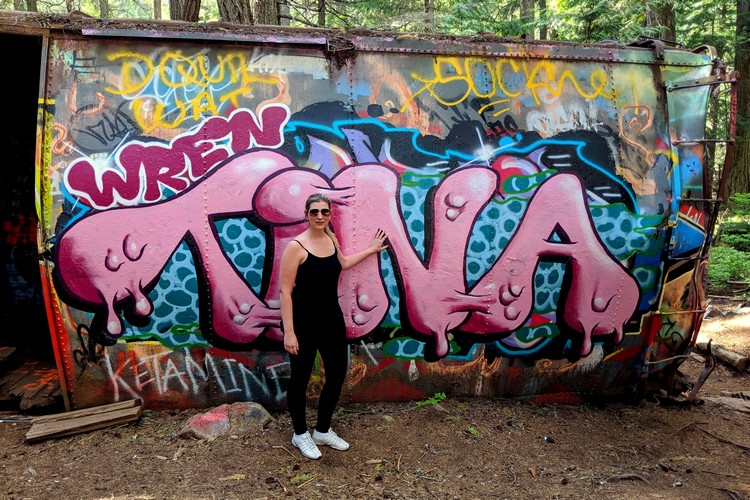 Graffiti is constantly changing as local artists repaint over the old. 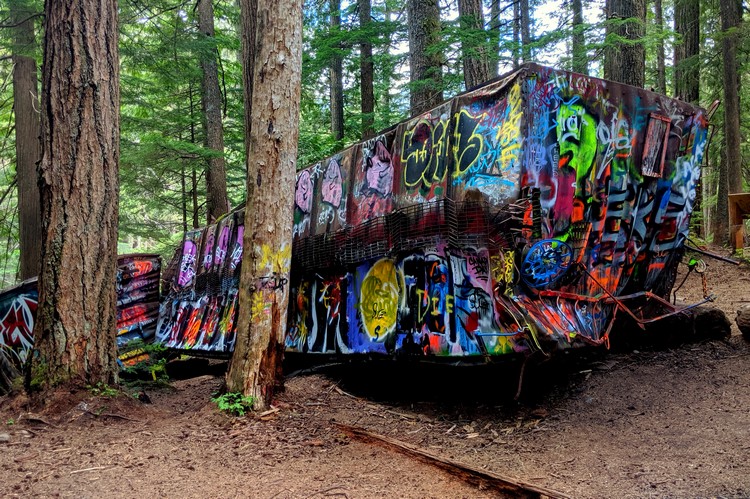 These box cars are still connected (above). The car to the left hangs over the river valley. 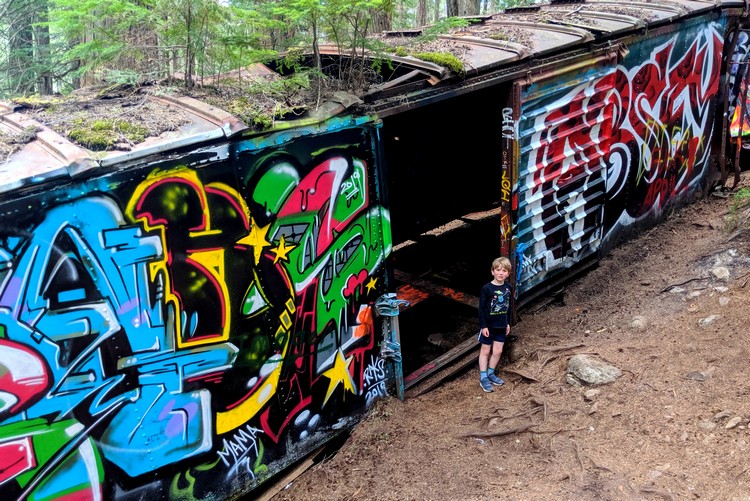 This box car is perched on the edge of the valley above the Cheakamus River. 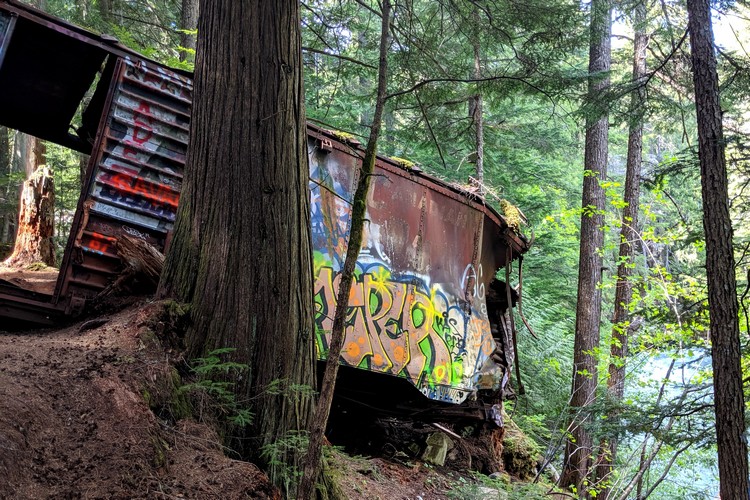 To the right, a steep drop off above the river. The below photo was captured inside this box car.

Inside the abandoned box car that sits on the river’s edge. The white glow in the bottom right of the photo is actually the sun reflecting off the river.

While the box cars are relatively safe, you don’t want to walk to the edge of this one. One slip and your going for a swim in the frigid river below. 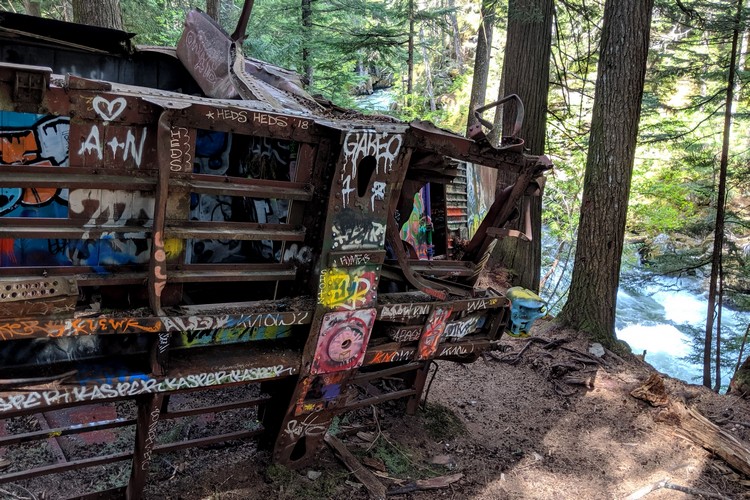 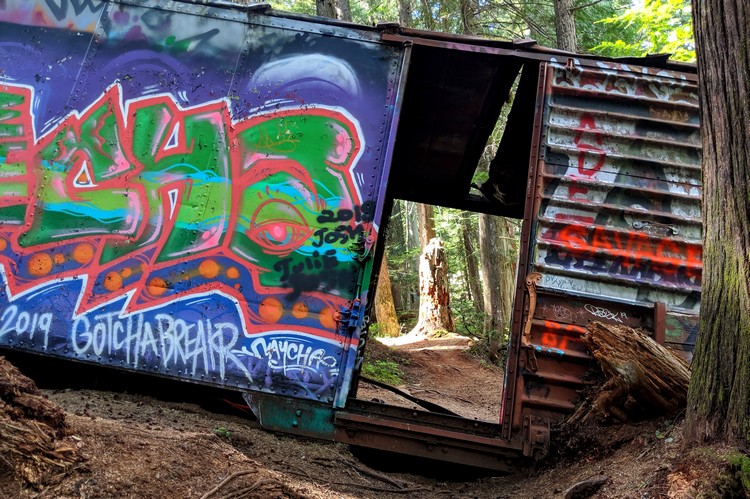 The juxtaposition of metal box cars and old growth forest. 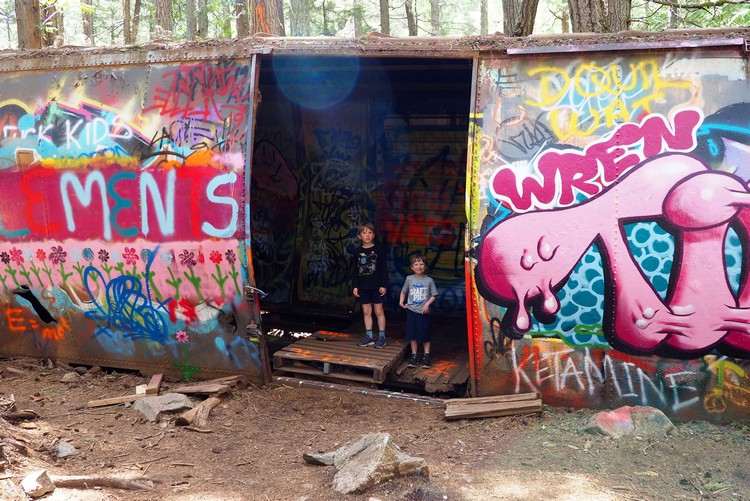 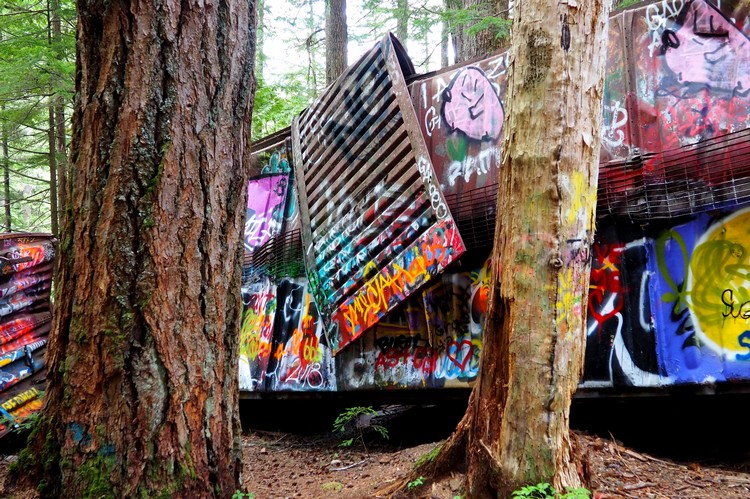 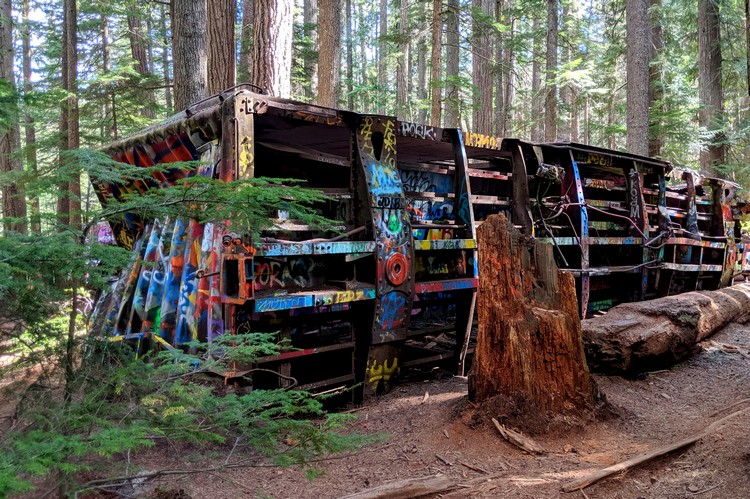 It’s an unusual place that has a spooky Blair Witch Project vibe about it.

Can you imagine wandering around this place at night under a full moon? 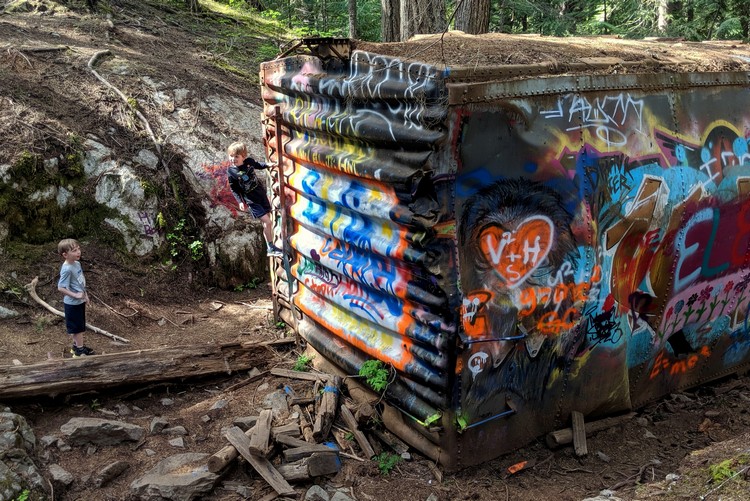 You can climb on the roof of the box cars via the ladders on the back. Keep in mind, these old rusty cars have been decaying in the forest for over 50 years, so it’s best to play it safe. 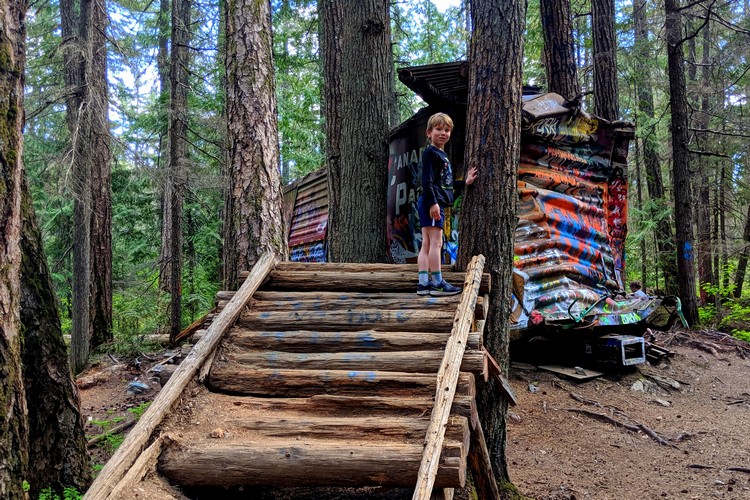 The crash site appears to have once been a hot spot for mountain bikers. If you look at the above photo, there’s a wooden bridge on top of the box car that drops off to the ramp that Braydon is standing on.

Here’s an old video of the Whistler Train Wreck mountain bike trails and bridges. It appears many of these man made obstacles at the crash site are no longer in use, however there are still hiking and biking trails surrounding the Train Wreck site. 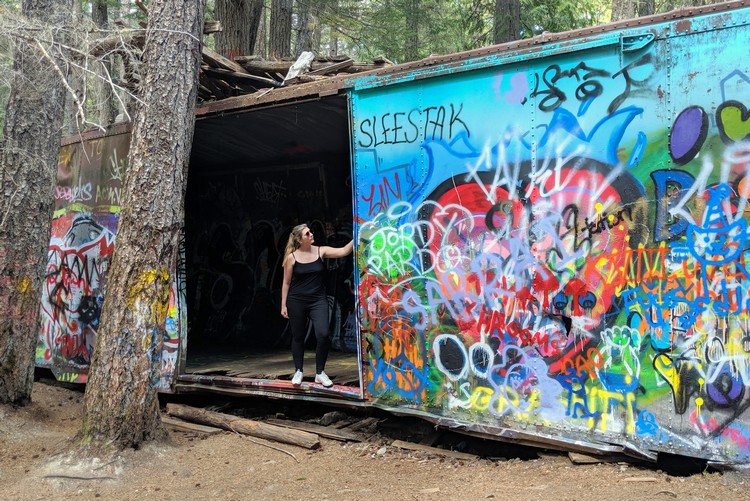 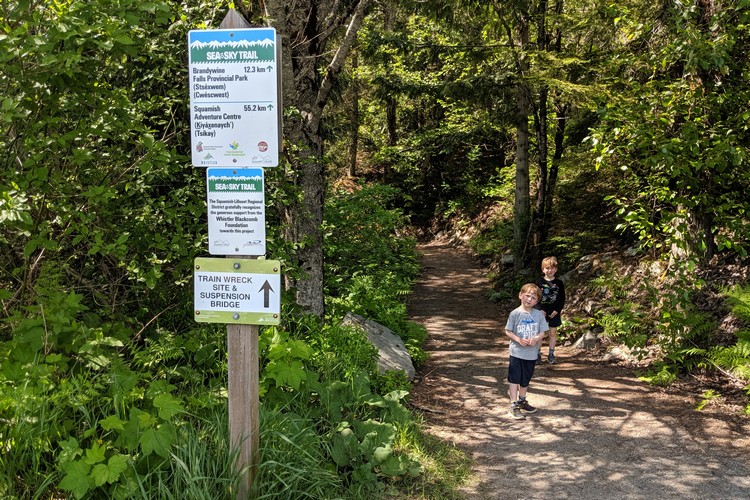 Access to the train wreck site has never been easier. The best time of year to do the Whistler Train Wreck hike is between May and November. You can access the site year round, however the area does see a lot of snow in the winter. Snowshoes are recommended during the months of December to March.

The trail is well marked and mostly flat – the total elevation gain is only 30 meters. It takes about 45 minutes to get from the trailhead to the train wreck, assuming a moderate to slow pace (we kept pace with our 5 year old boy). The trail is suitable for all ages and abilities.

Give yourself at least two hours for this hike, including time to explore the crash site.

The trail is a part of the much longer Sea to Sky Trail that connects Squamish to Whistler. You can also reach the Brandywine Falls Provincial Park from the Train Wreck Hike parking lot. It’s an additional 12.5 km hike to Brandy Wine Falls. 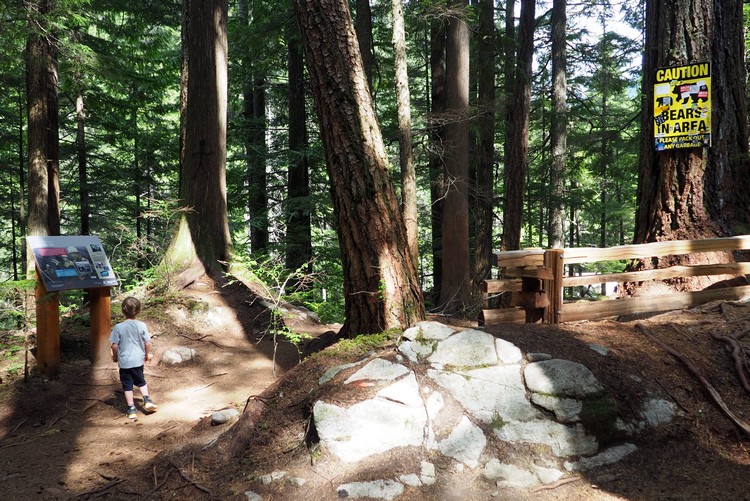 Caution – wild bears in the area. The old box cars are an ideal shelter for wildlife. Enter each box car slowly, just in case there may be wild animals sleeping inside. 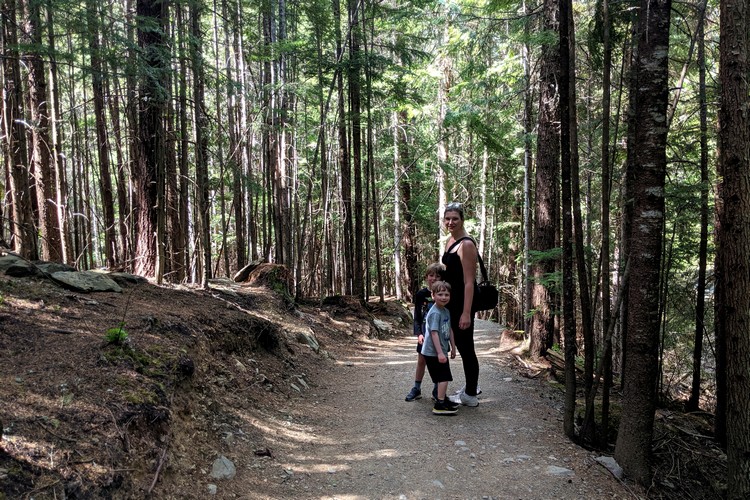 The trails are flat and wide. We reckon you could bring a sturdy baby stroller on this trail. 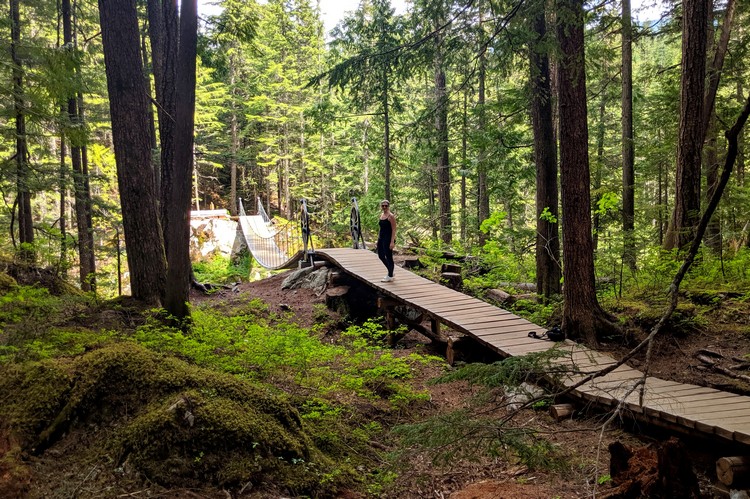 This boardwalk connects the suspension bridge to the train wreck site. 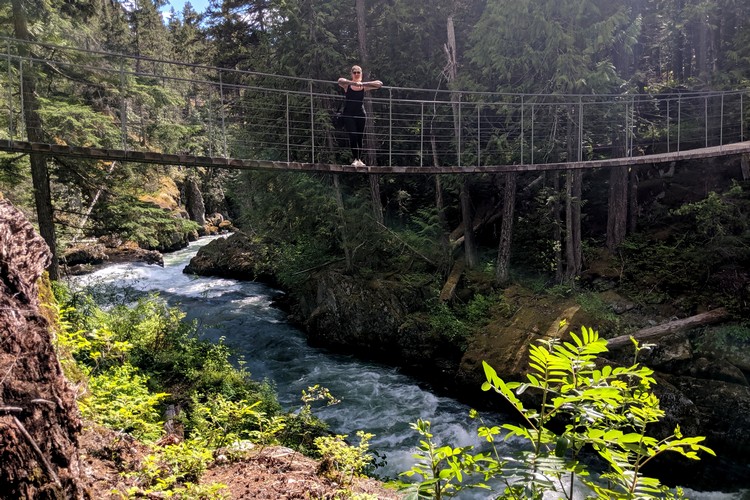 Prior to this bridge being built, access to the Train Wreck was along the train tracks, which is dangerous and illegal. Because the crash site has gained popularity in recent years, the suspension bridge was built to connect the Sea to Sky Trail with the Train Wreck site. 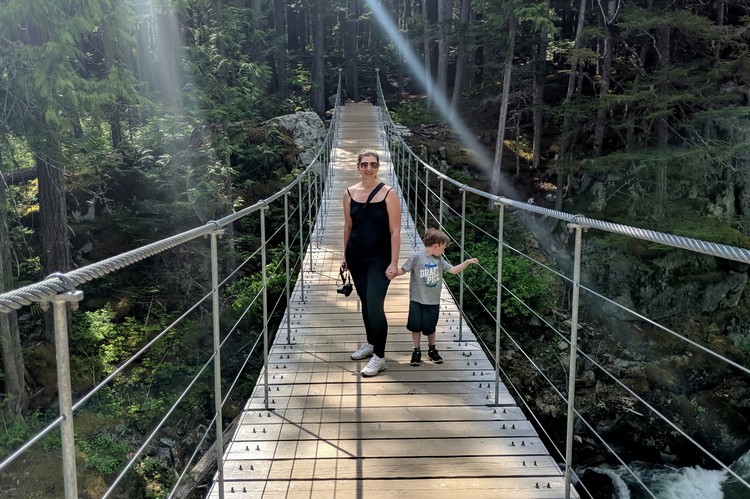 Sun beams while crossing the suspension bridge to the train wreck. 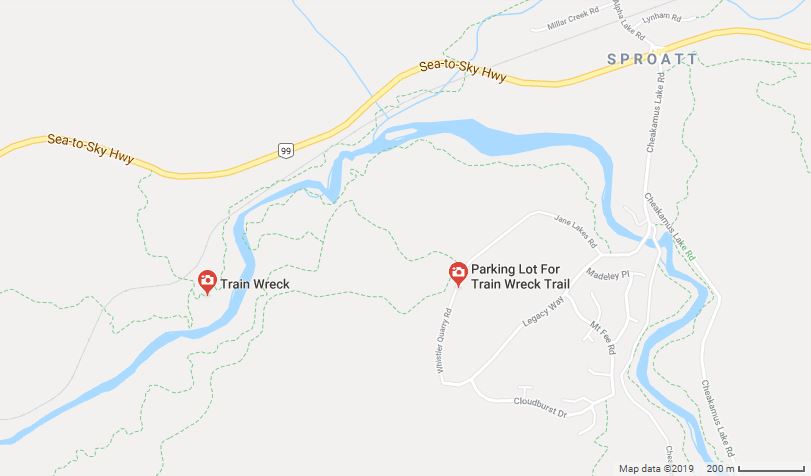 How to get to the Whistler Train Wreck

To reach the Train Wreck hike, drive on Highway 99 until you reach Function Junction. Turn south on Cheakamus Lakes Road. You will pass the Whistler Interpretive Forest parking lot. Keep driving south to Legacy Way. You will cross a bridge.

If you pass through a residential community you’ve gone too far down Legacy Way. Turn around and make a left on Jane Lakes Road. This neighbourhood is the Whistler Athletes Village, a legacy from the 2010 Winter Olympics.

The parking lot for the Train Wreck hike is located on Jane Lakes Road. Parking is free.

Another way to reach the Train Wreck hiking trail is via the Whistler Valley Trail, which is a car-free, paved trail that connects Whistler’s neighbourhoods, lakes, viewpoints and trails. This trail covers over 40 km of terrain. 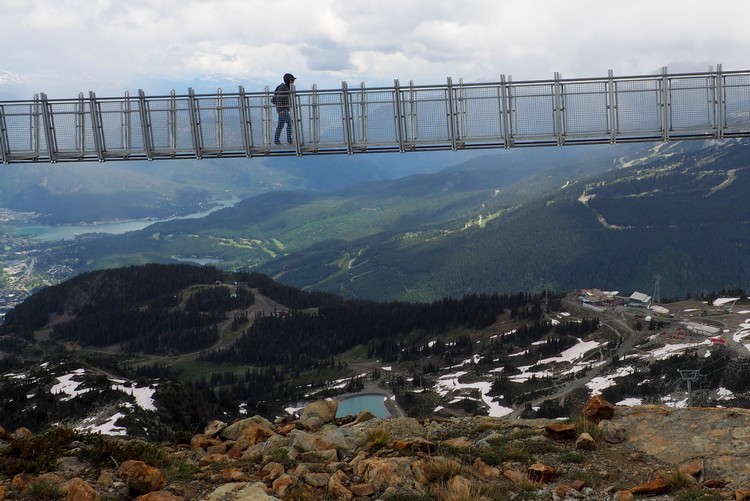 Where to Stay in Whistler:

Whistler Restaurants – Where to eat: 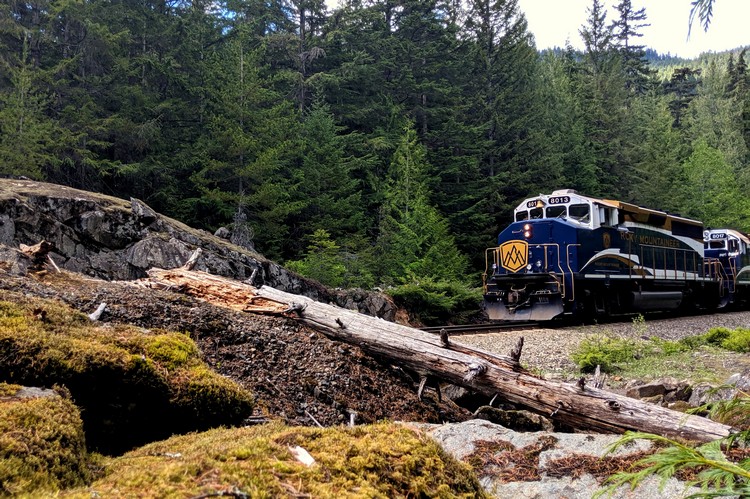 Have you visited the Whistler Train Wreck?

Share your tips and recommendations in the comments section below. Our readers find your feedback and experiences helpful.

Having trouble viewing the video? Watch directly on YouTube here.

Best Things to do in Penticton this Summer with Kids