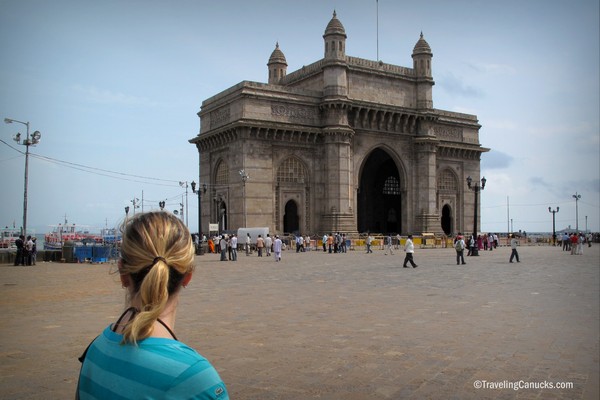 From Backpackers to Bollywood Actors: A Day in Mumbai, India

It’s not uncommon for Bollywood scouts to comb the trendy streets of Colaba in Mumbai, searching for unsuspecting Westerners to be an extra in a movie or music video. Our guidebook had a short clip about the industry and gave a few pointers on how to visit a Bollywood set in Mumbai.

We were skeptically intrigued. It sounded like one of those, “I remember this one time, in Mumbai” type of stories we simply could not pass on. With a little bit of luck, we could even pick up a few bucks along the way! If you’re unfamiliar, Bollywood is India’s version of Hollywood. Though, with over 1.1 billion in population, Bollywood’s reach is much greater than its American counterpart.

While on an overnight sleeper train from Udaipur to Mumbai, we decided that we would not seek out Bollywood fame. Instead, we would leave it up to fate and let it decide how our 4 days in Mumbai would play out.

On our first evening , we returned to our guesthouse after dinner and heard a doorbell ring.

“Who could that be?”

We looked at each other confused and somewhat paranoid. The bell rang again.

It was clearly intended for our room. Nicole curiously and cautiously opened the door.

Enter Polo into our story. Polo is the red-headed, smooth talking Bollywood recruiter that was clearly called by our guesthouse manager in return for a small commission. He was given the tip that two Caucasian Canadian tourists had arrived and intended to stay in Mumbai for a few days (info that was openly shared by our hotel manager).

Whatever the explanation, fate had led Polo to us and we agreed that “if approached, we’ll do it”.

We hadn’t even been in Mumbai 3 hours and we were already going to Bollywood!

Polo greeted us early the next morning but mysteriously disappeared shortly afterwards. We sat in the morning sun outside our guesthouse for about 30 minutes before Polo came speeding around the corner on his ‘vintage’ scooter. He was frantically looking for one more extra to fill his quota of three.

He found Sophie, a blonde Parisian tourist about our age, in the arrivals section of the long-haul bus terminal. She had just completed a 13-hour overnight bus from Goa. She hadn’t slept or eaten but was fearlessly up for the task and joined our team.

“How often does an opportunity like this happen in one’s lifetime?” Sophie replied in her strong French accent. We agreed.

With his quota filled, Polo passed us off to his assistant who whisked us away in an old black taxi. Polo’s assistant (we never did get his name) didn’t speak English, making the conversation quite entertaining and unproductive.

The taxi trip was short. We were dropped in front of a large central train station in the heart of the city. Clearly this was not our final destination. We battled against the forceful traffic of thousands of morning commuters and boarded a local train.

We were heading north, leaving the hustle of downtown Mumbai behind us.

Like traveling by tuk tuk and auto-rickshaw, this train journey was a unique cultural experience all on its own. The beat-up trains were like a metal cage, every inch stuffed with agitated commuters. It was 99% men, all curiously staring at the three funny looking foreigners (two of which are attractive blonde women).

Organized mayhem is the best way to describe the experience. Some serious pushing and punching occurred to get on and off the train at each station. We witnessed harmless old men being pushed, punched and knocked to the ground because they weren’t moving fast enough. It truly is ‘survival of the fittest’ when you ride the Bombay rail!

When we arrived, we were told that we would be in an “office scene” and that “our look was right for the part”.  We didn’t know what else to expect, but we got the feeling that this production was not going to be a blockbuster.

We were immediately shoved into a tiny room with a hand written sign on the door that read, ‘Make-up’.  The only thing ‘make-up’ about the room was that it had a mirror and a small make up bag on the table.  This was the only air-conditioned room, so it became home base for the day. Let’s not forget that it’s India and its summer (translation: it was incredibly hot, humid and sticky).

So we sat and we waited… and waited some more.

Actors would come in and out of the room at leisure. At first it was kind of awkward with everyone sizing each other up. But once the ice was broken it was all good, with plenty of interesting conversations. We met a few aspiring Bollywood actors that have minor roles on cheesy Indian soap operas.

It all seemed extremely disorganized and hectic, people yelling and running, sleeping and waiting.

But we were informed that everything was normal, “That’s just how Bollywood operates.”

Finally, after two hours, Cameron was called to ‘dress’. In his first scene, he was to be a ‘smart professional’ looking to buy a sports car. When he entered the set it was evident that this was not an ‘office scene’ at all. It was a green screen set that would allow the producers to superimpose a digital background.

The producers were very tight-lipped about what the project was for. Throughout the day we got bits of information, but never an answer. Our conclusion was that the production was for a virtual website, either for an international duty free business or the government.

It was strange and uncomfortable standing in the middle of a giant green cube with thirty pairs of eyes staring back. English and Hindi commands were being shouted. We couldn’t understand what they wanted us to do half the time, so we just smiled.

The scenes seemed to be made up on the fly. Cameron was told to act a little and talk with the ‘car salesman’. The crazy thing was that there was no car or showroom!

It was actually pretty comical. What a bizarre way to spend an afternoon in India?

The day went by painfully slow. The worst part was that we had no idea what we were doing or when we’d be needed. People came and went. People shouted and ran up and down the hallways.

The set was hysterical and amusing, meticulous and frantic… but it was ‘Bollywood’, and we were soaking up every minute of the experience.

Cameron was called again. This time, the scene was titled “romantic walking with female”.

The scene was quick and the producers only needed a few takes. The interesting thing was that many of the other extras were actually living in Mumbai, trying to catch a break in the unpredictable acting world. They weren’t too thrilled when they learned that we were there as tourists on a mission for a unique travel experience.

Cameron’s final scene was the funniest. He was an ‘American fisherman’ that had to do fishing poses and pretend to fish in an imaginary pond.

Nicole’s scenes were with two different male actors. In both circumstances, she was to act in love while walking into a store and shopping.  Her second scene was comical. They wanted the ‘stylist’ to tease her hair into a ponytail. She looked like she just rolled out of bed after a hard night of drinking, rather than an updo for a Bollywood scene.

After 12 hours in the cramped studio, it was finished.

In the end, Cameron was in four scenes and Nicole was in two.

We pocketed our 1,000 rupees (our day’s salary – about US$25) and were taken back to the train station to tackle the Western Rail once again.

Though it was nothing like we had expected, our day in ‘Bollywood’ was an amusing and highly educational experience that we’ll never forget. If you find yourself in Mumbai, keep an open mind. You never know when a recruiter might come knocking on your door.