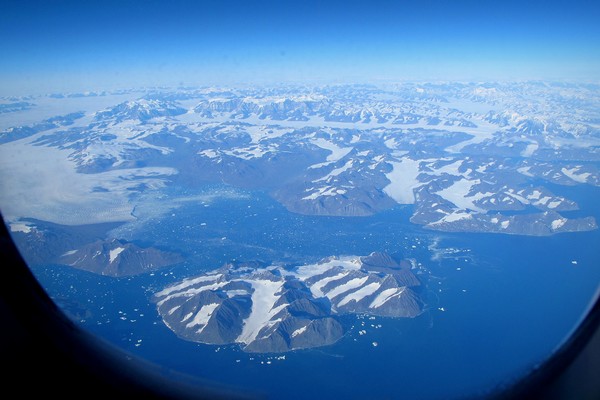 When the pilot stops the in-flight entertainment system to tell his passengers that “something very unusual is happening”, you pause and listen to what he has to say.

“I have flown this route hundreds of times before and only experienced visibility like this a handful of times”, he continued. “Take a moment to look out your passenger window to see something truly amazing”.

Our curiousity was peaked, so we obliged. He wasn’t lying. What we witnessed that afternoon was Mother Nature at her finest.

In case the title didn’t give it away, we were flying directly over Greenland – and she is quite the looker! 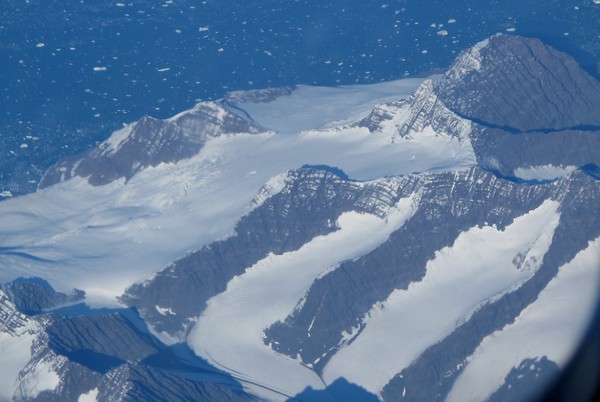 We couldn’t have asked for better visibility that afternoon. The pilot seemed to slow down the plane and tilt it so his passengers could get a clear view of the breath taking scenery. It felt as if we could actually reach out and touch the rocky, snow-capped mountains.

What a stroke of luck! 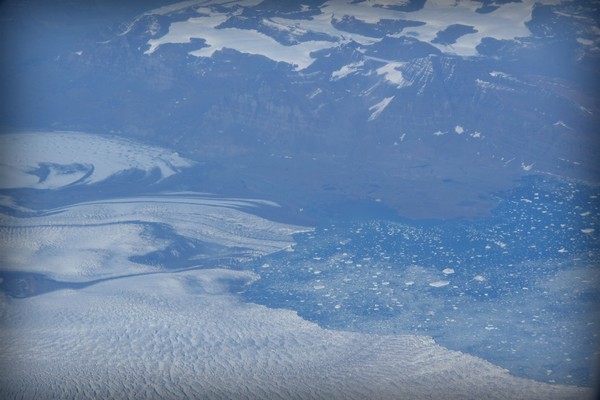 This was the biggest glacier in our flight path. I wish I could provide more information, but I have no idea where we were at this point. However, I do know that we were flying near the bottom tip of the ruggedly beautiful island. 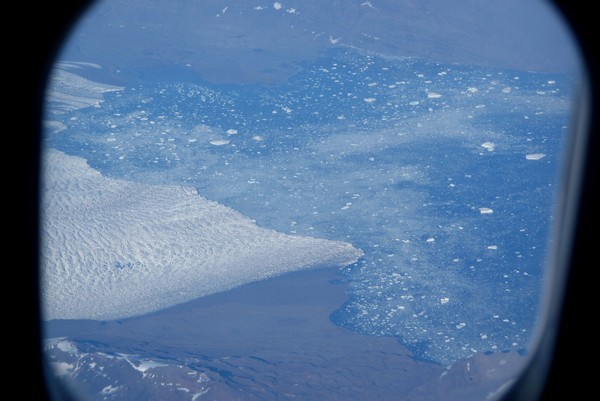 Yes – your eyes are correct. That’s thousands of icebergs breaking free from the massive glacier. This was the first time we had ever seen floating icebergs, so it was kind of a big deal. 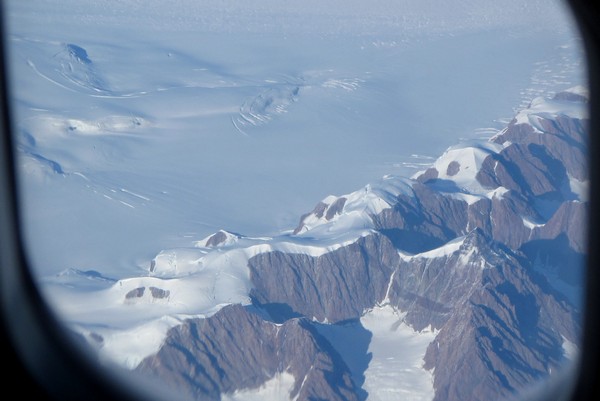 The funny thing about these photos is that we were actually sitting in the middle row of the aircraft. So most of these photos were taken by me standing in the aisle, zooming in on the window and hoping that they didn’t turn out blurry. 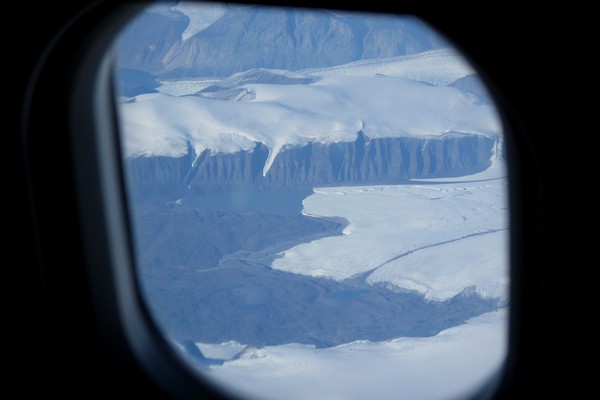 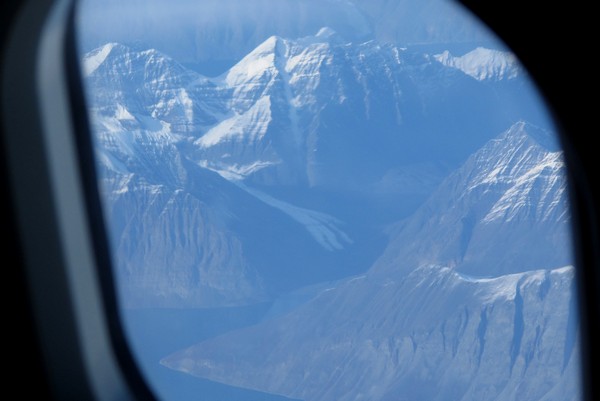 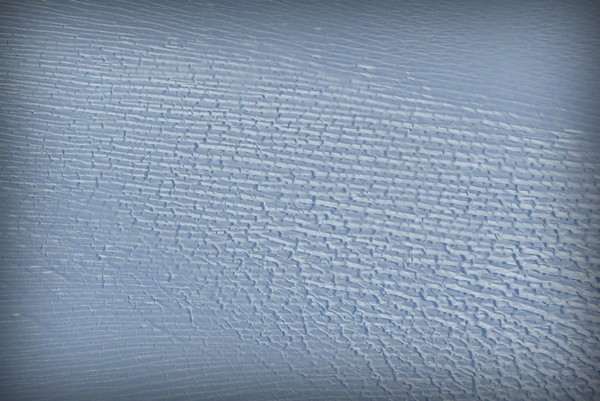 Fortunately, a friendly passenger sitting in the nearby emergency exit row got out of his chair and allowed me to take a few photos from his window seat. I think he heard my camera snapping non-stop and realized I was pretty keen to capture this incredible moment.

I was extremely grateful for his offer. He joked about charging me $1 per photo, but I’m glad he didn’t because I probably would have owed him about $20! 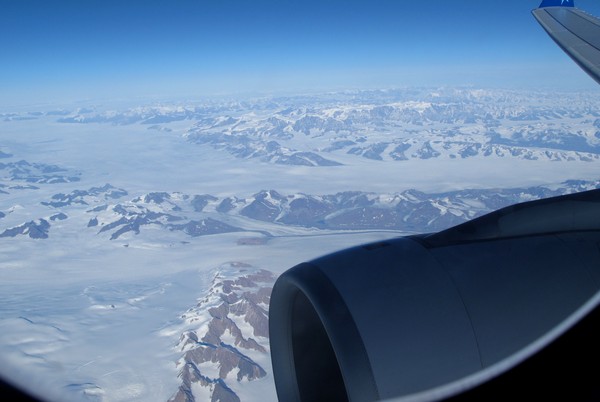 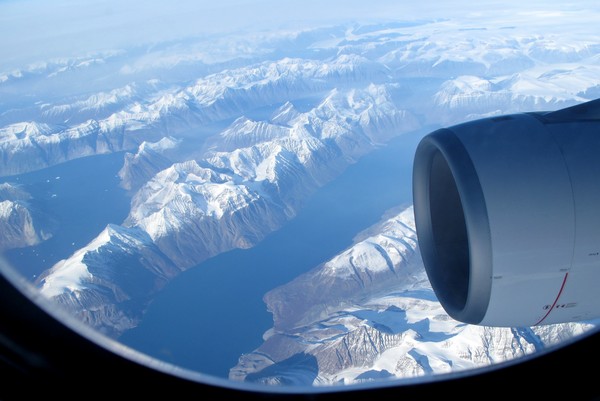 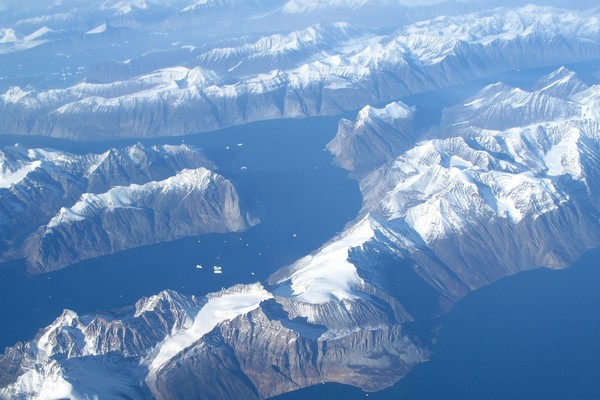 This is my favourite photo!

Although it’s physio-graphically a part of North America, Greenland has been politically and culturally associated with Europe, specifically Norway and Denmark. It is currently an autonomous country within the Kingdom of Denmark.

Greenland is also the world’s largest island. Now, I know what you’re probably thinking – surely Australia is larger than Greenland. You would be correct. However, Australia is not considered to be an island because it’s actually a continent. There’s some trivia knowledge for you!