The trip that changed everything.

A significant anniversary just passed without us realizing it until last week. It was 10 years ago in June that we ventured to Southeast Asia for the very first time. It was the first “big trip” we took together overseas, one that changed us forever.

To this day, our time in Malaysia remains as the most meaningful and impactful adventure we’ve had.

What made this trip so special was that it was not a typical vacation or holiday. It was the first time we spent a sizeable amount of time exploring a foreign region together, with no set plans or itinerary. It was a transformational experience and the first time we felt like true travelers. 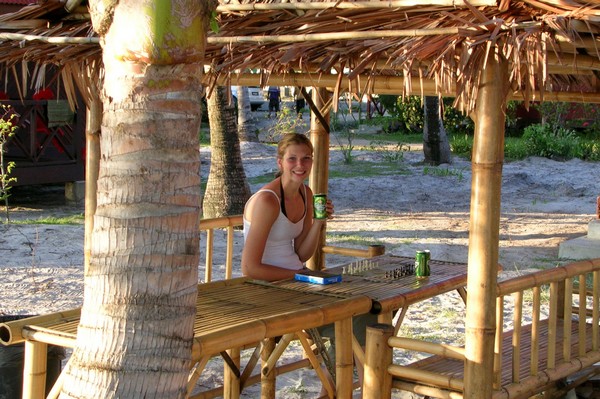 We ended up in Southeast Asia because Nicole accepted a 4 month student exchange program at the Universiti Sains Malaysia, located on the island of Penang, just south of the capital city Georgetown. This meant finding an apartment and room mates in a very different environment.

Reflecting on that trip got me thinking about the power of travel and how it can positively impact the way we think, act and feel.

Everything about that trip to Malaysia felt larger than life. The smells, the sounds, the street level chaos… our senses were kicked into overdrive the moment we stepped out of the airport. 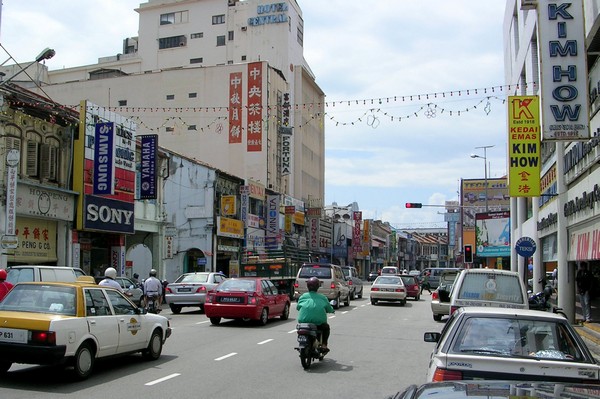 Before arriving in Penang, we had an image of SE Asia that was highly inaccurate.

Our ignorance was mostly driven by our inexperience with the world (we were in our early 20’s) and our fear of being on the other side of the world in a completely foreign environment.

Remember, this was back in 2004, a time before Google Maps, smartphones and social media. Information was not as readily available as it is today (though I flip flop as to whether that’s good or bad). Back then, we relied almost exclusively on old Lonely Planet guide books, dated television programs and the unsolicited advice from hungover backpackers. 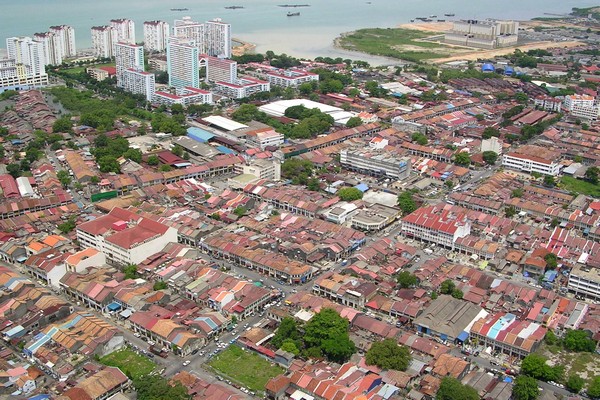 Our first few days in Malaysia were a struggle.

The humidity was unbearable, our stomachs had trouble digesting the food, the streets were loud and obnoxious and the locals stared at us relentlessly.

This was also the first time we witnessed real poverty. Dilapidated old colonial buildings sat amongst piles of garbage and bubbling streams of black sewage water. It was complete culture shock.

We felt homesick and out of place. I vividly remember feeling like we had made a mistake and even considered changing my return flight home.

But, as each day passed, we became more and more comfortable with our surroundings and we began to embrace the opportunity. In time, we grew to love those dusty, humid, chaotic streets. 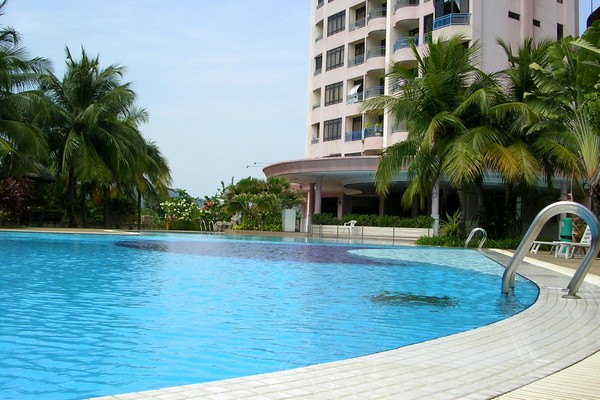 Many of the exchange students lived in the same apartment building, so each night we would gather by the swimming pool to socialize over a few drinks (that’s the pool in the above picture).

Inevitably, a few drinks would turn into a few more and we’d often end up at the local hawker center late at night. Residents and shop owners would often join us to learn about our country and practice their English. They were just as curious about us as we were about them.

It was these simple moments, eating spicy noodles and drinking cold Tiger beer with a group of European exchange students, that left the biggest impression on us.

Now, the philosophical world traveler in me feels the need to describe these moments as rich cultural experiences, but, truth be told, we were more interested in partying and having crazy adventures than learning about Malaysia’s history, religion and social challenges. The cultural education was a convenient bonus. After a few weeks of excessive “good times”, the reality of long-term travel began to set in. Typically we would be on a return flight home after a week or two away, so the thought of several months seemed like an eternity.

But we had a few months in Malaysia, so we started to develop a routine.

Nicole cleverly scheduled her classes from Tuesday to Thursday, which gave us plenty of 4-day weekends. When she was in class, I worked on her homework at the Internet cafe across the street from the university.

This gave us the opportunity to leave Penang on the weekends to explore neighboring regions, without worry about project research or writing papers. Hopefully her former professors aren’t reading this blog post. One experience that stood out was a trip to the Perhentian Islands.

We heard about the tiny tropical islands from another student who had spent a week on Perhentian Besar getting her PADI open water dive certification. It didn’t take much convincing after we saw a few of her photos.

The Perhentian Islands are located 10 miles off the northeastern coast of the Malaysian Peninsula, just south of the Thai border. For perspective, see the map below – the red star on the left is Penang and the red pin on the right is the Perhentian Islands.

There was no cheap flights from Penang to Kuala Besut so we decided to take the bus. Geographically speaking, the two cities did not appear to be that far from each other, so we thought the journey would be fairly straightforward.

This was our first taste of “no itinerary” travel.

Feeling adventurous, we made our way to the bus station in Penang and spent the better part of an hour trying to find the right bus. The “bus terminal” was really just a series of retail stores on the side of a road.

The only option we had that day was an overnight bus that would take approximately 10 hours. It departed at 9:00 PM so we assumed it would arrive in Kuala Besut around 7:00 AM.

This was also our first overnight bus experience in Asia. We had no idea that bus drivers like to crank up the A/C to the point of freezing. We were unprepared and did not bring a sweater or blanket. Sleep did not happen.

At around 5:00 AM the bus driver stopped at a dark, dusty intersection in a sketchy part of town with only one street light. The town had a creepy vibe. The driver flicked on the lights and began shouting at the remaining passengers. The bus had dropped off many people along the way and the only passengers left were other backpackers, obviously headed to the same tropical island destination.

We could not understand what he was saying but it was clear that he wanted us to get off the bus. He opened the storage compartment underneath the bus and began unloading several over-sized backpacks.

“Pulau Perhentian, yes?” he said with a devilish grin.

“Yes. But where do we catch the boat?” we replied, thoroughly confused and not impressed that our backpacks were tossed on the dusty road.

He smiled and nodded. He clearly did not understand.

Fortunately, one of the passengers could speak Malay, so he translated. Apparently we had to wait at this dusty intersection in Jerteh for 2 hours to catch a local bus to the ferry terminal. That was not a part of the plan. We made it very clear when we purchased our bus tickets that Kuala Besut was the final destination. There was no mention of a bus transfer.

Apparently it’s quite common for bus drivers to stop at Jerteh instead of driving all the way to Kuala Besut. We were confused and anxious. The streets did not look friendly at that hour and we were all very tired. We teamed up with the other backpackers and waved some money at the bus driver, “Can you take us to Kuala Besut?”

Not surprisingly, he quickly obliged and accepted the money. We got the feeling we were not the first tourists to pay more for ‘the extra distance’. We finally arrived at the Kuala Besut ferry terminal around 6:30 AM. Tired and cranky, we went to the ticket window and learned that boat was not supposed to leave until 9:00 AM.

Still feeling confident from our recent negotiating success, we managed to convince the boat driver to depart early because our group now totaled 11 backpackers. It became clear that transportation availability is highly negotiable in Malaysia.

After 12 hours of sketchy bus and boat travel we finally arrived.

We were warned that beach front accommodations booked up fast so we made a reservation the week before. This was a smart play because there was very little available for the travel companions we met on the bus (they just arrived and hoped for the best). This private bungalow was our home for a week. No hot water but that patio was gold. 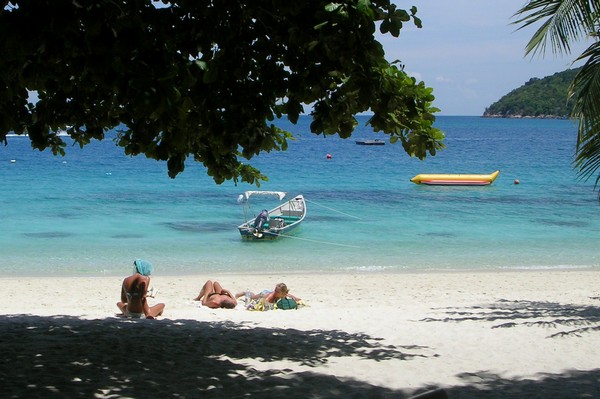 This was the view from the balcony of our private bungalow. 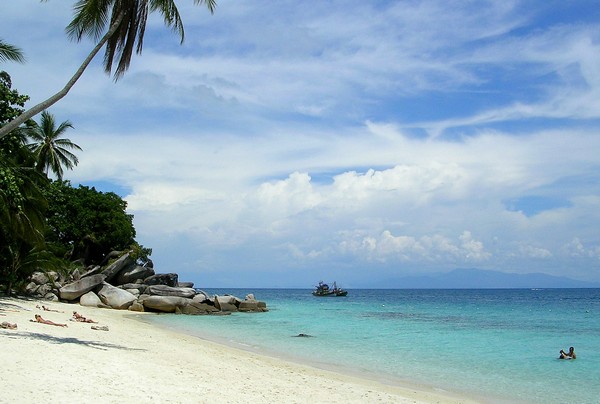 The beach view to the left of our bungalow… … and this is the view to the right. There were no crowds. We had much of the island to ourselves. The Perhentian Islands are the perfect tropical island paradise.

Clear blue water, silky white coral sand, tall swaying palm trees, wooden bungalows directly on the beach. There was even a small reef about ten meters from the shore. Each evening, we would gather on the beach and eat freshly caught seafood under the stars with our toes in the sand.

It’s one of those special places that you never want to leave. 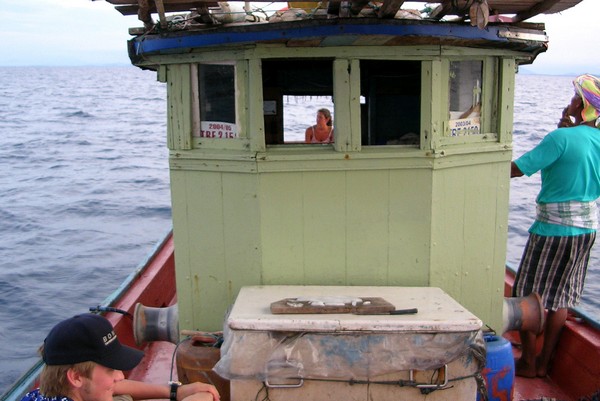 Tropical beach life aside, what made that trip to the Perhentian Islands so memorable was that we had to challenge ourselves to get there. We had to piece together the journey with limited or inaccurate information.

Things did not go according to plan and we had to find creative ways to overcome the unexpected obstacles. We had to accept being uncomfortable and vulnerable. We had to rely on the kindness of people and trust that everything was going to be okay.

It wasn’t always easy, but the most rewarding things in life rarely are.

It taught us that travel really is about the travel. It wasn’t the perfect white sandy beach that left the strongest impression on us. It was navigating the confusing bus terminal and finding the right bus ticket. It was that anxious moment on a dusty, deserted road at 5:00 AM in the middle of nowhere. It was connecting with other travelers faced with the same dilemma and finding a solution, together.

Looking back, it was that experience in Malaysia that laid the fountain for future backpacking trips to South America, India, the Middle East and Eastern Europe. It introduced us to a ‘choose your own adventure’ style of travel that forever changed the way we approach our travels.

Your turn! Tell us about the trip that changed you forever.