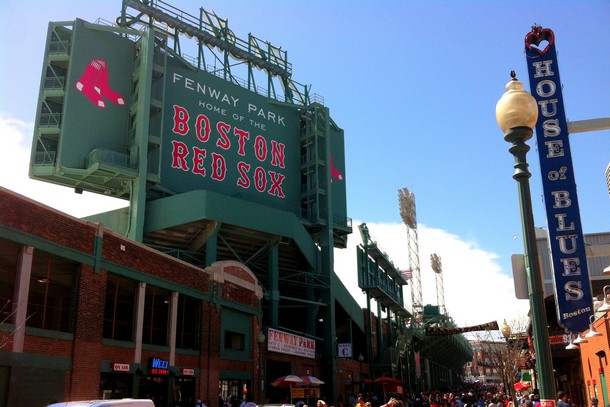 One of my favorite things to do when visiting a new city is to attend a live sports event. You can learn a lot about a city and its people by watching how they come together to support their local sports teams.

Growing up in Toronto during the Blue Jays’ glory days in the early 90’s, I’ve been a baseball fan since I was a young boy. My dad would take me and my brother to ball games at the old Skydome (now named Rogers Centre) and we even went to a few games at the old Exhibition Stadium back in the mid-80’s – which makes me feel really old when I do the math.

One of the most iconic stadiums in all of professional sports is Fenway Park in Boston.

Fenway Park is more than a ball park, it’s a historical landmark and place of worship for baseball fans. Originally opened in 1912, it’s the oldest ballpark in Major League Baseball and remains one of the smallest, which makes for an intimate fan experience. 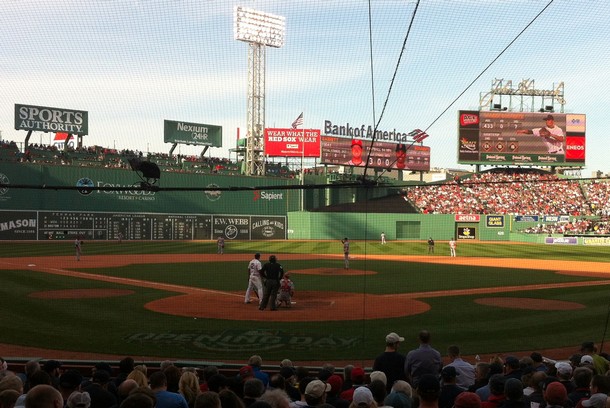 I love this Boston Red Sox quote found on the Google-webs:

“One of the joys of New England life is returning to the Chapel that is the home of the Boston Red Sox: Fenway Park. Unlike other Shrines, though, this House of Worship generates electricity. It is a place where visitors can see the invisible murals that have been painted and left behind by the men who have played there in years gone by.”

I’ve always wanted to visit Fenway Park, so when I found out that I would be visiting Boston I looked up the Red Sox schedule to see if they were in town.

I could not believe my perfect timing – the Red Sox home opener was happening on the Monday afternoon when I was in town! 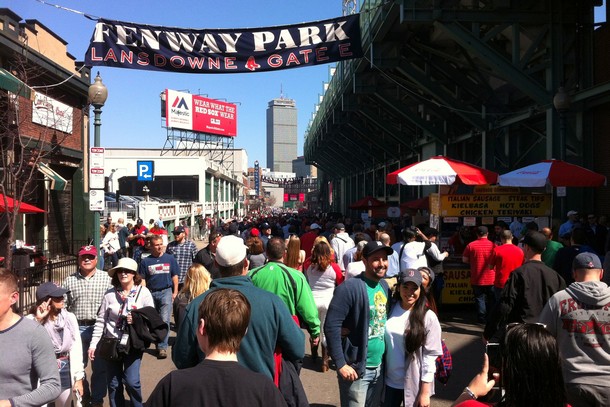 The Red Sox home opener against the visiting Washington Nationals was the hottest ticket in town. Even if you’re not a baseball fan, a trip to Fenway Park is a must-do when visiting the city of Boston (here are a few more things to do in Boston).

The city was buzzing with excitement to see their beloved Red Sox play on home soil. It’s an atmosphere you have to experience at least once in your lifetime. 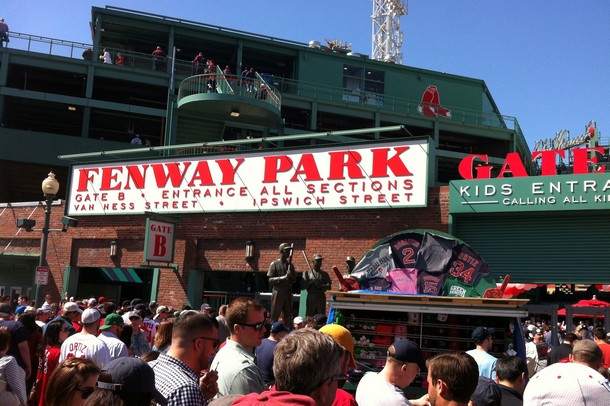 The streets surrounding the stadium come alive on game day.

Restaurants and bars fill up hours before the game, leaving nothing but standing room for a pre-game pint. Fortunately we found an underground bar about 1 block from the stadium that still had a table available, and this was 2 hours before the first pitch! 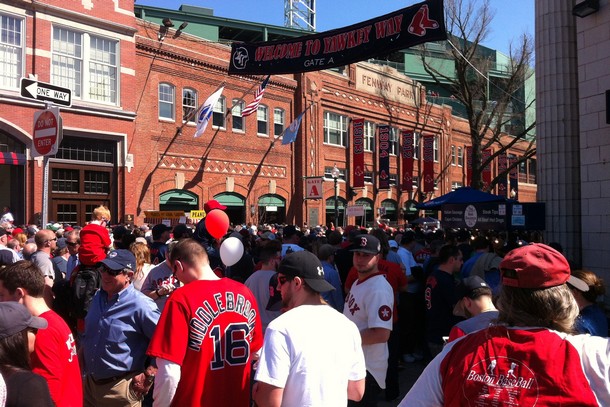 The baseball season starts in early April, so there’s a good chance the weather will be cold and rainy for the annual home opener. Boston had experienced once of its coldest and snowiest winters on record, so I was skeptical that the weather would cooperate during my visit.

We couldn’t have asked for better weather that day.

The sun was shining and there wasn’t a cloud in the sky. I’m sure the fans would have arrived even if the weather was crappy, but it was fun to watch the city and its people celebrate the new season on a bright sunny afternoon. 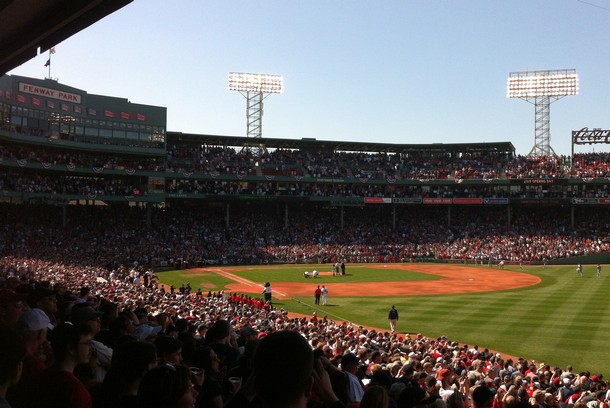 Being that this was the annual home opener, the Red Sox organization made the ceremonial first pitch a little more special than usual. The stadium erupted with cheers and high-fives when it was announced that local legend Tom Brady, quarterback of the Superbowl Champion New England Patriots, would be tossing the first pitch. 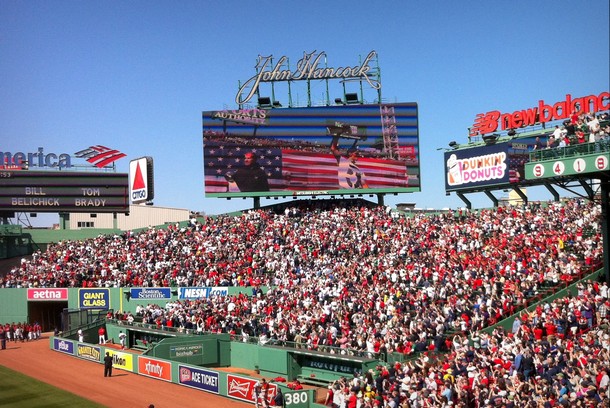 Fans went crazy when Tom Brady and head coach Bill Belichick walked across the outfield with the Vince Lombardi Trophy in hand. I couldn’t get a good photo of them because our seats were too far away, so I snapped one of the big screen instead. What a way to start the ball game! 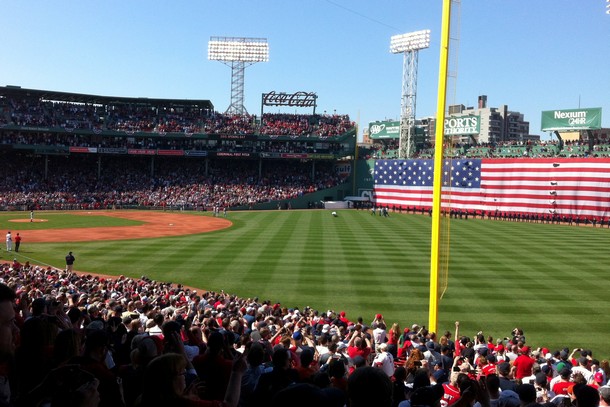 Fenway Park has expanded many times over the years, which has resulted in unique features like The Triangle, Pesky’s Pole (the yellow pole pictured above) and the Green Monster in left field (picture below). There are no other stadiums in the world quite like Fenway Park. 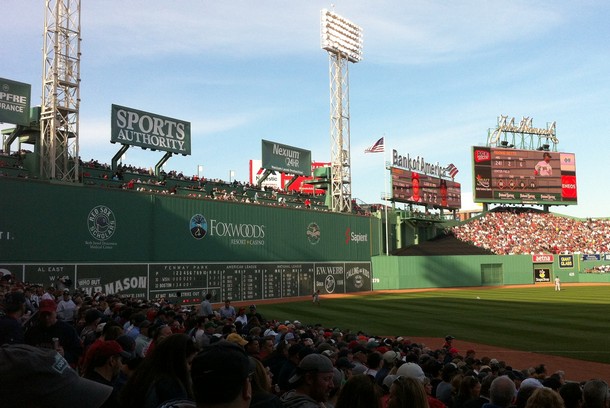 We watched the first few innings from our original seats in the right field grandstand and then decided to explore the stadium. After all, baseball is only a part of the Fenway experience. 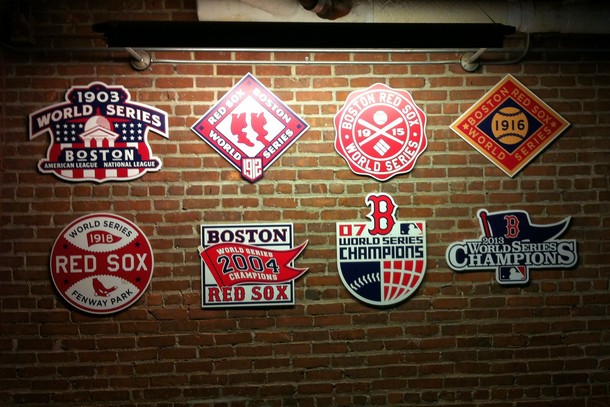 Walking around the stadium is like walking though a museum. There are so many artifacts and historical photos that take you back in time. It’s such a cool place. 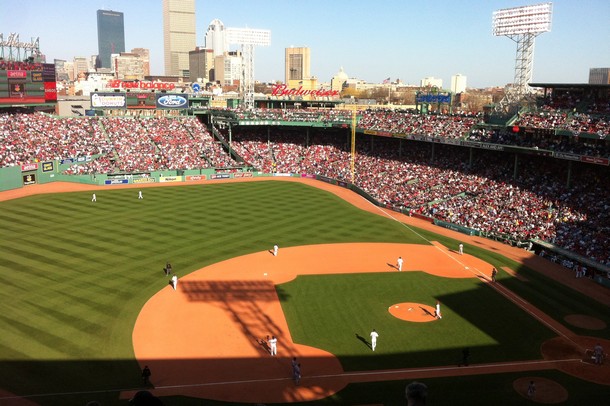 We wandered to the upper deck to get a different perspective. There are lots of standing only sections so we enjoyed a few beers from a variety of locations throughout the stadium. 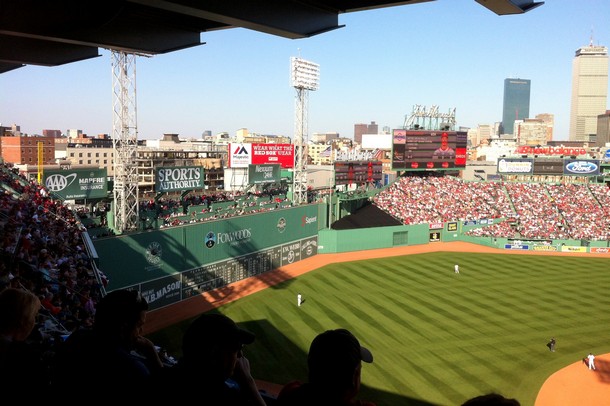 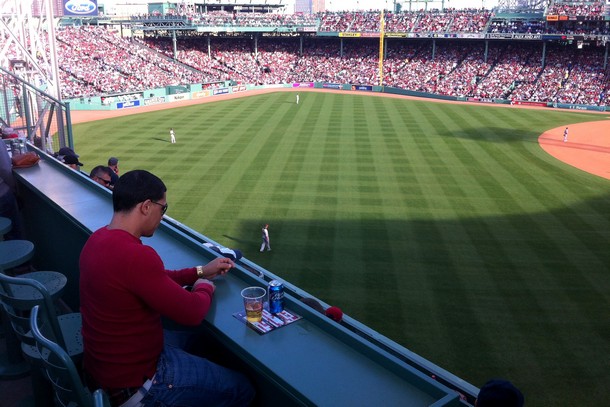 This is what it looks like to watch the game from on top of the Green Monster. I wanted to get seats on the Green Monster but they were starting at $500 per seat for the home opener, which was well out of my price range (we paid US $120 for right field grand stand in Section 7).

I had to sweet talk the security guard to let me step on the Green Monster to capture this photo. 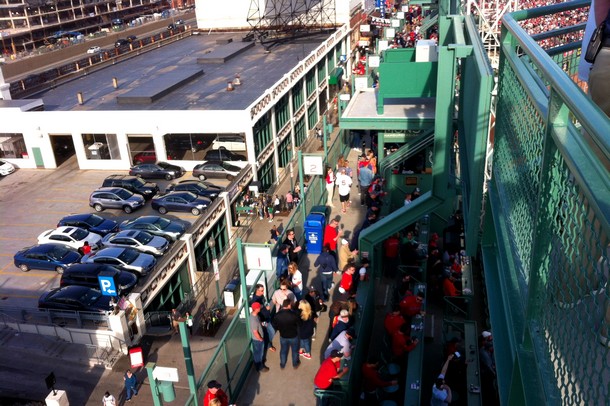 This is the view behind the Green Monster. There’s not a lot of distance between the ball park and the neighboring buildings. I wonder how many times a homerun ball has landed on a car parked on that rooftop parking lot? 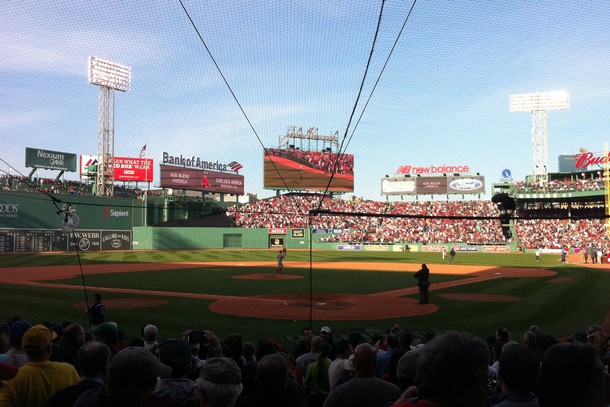 After hanging out in the upper deck for a few innings, we ventured down to home plate area to get a different view of the stadium. At this point in the game the Sox had built up a big lead over the Nationals, so the fans were in good spirits. 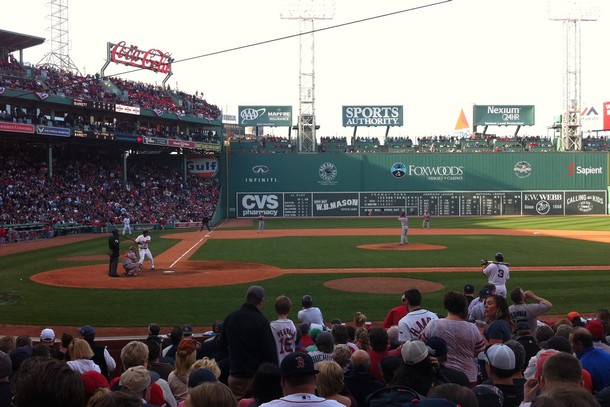 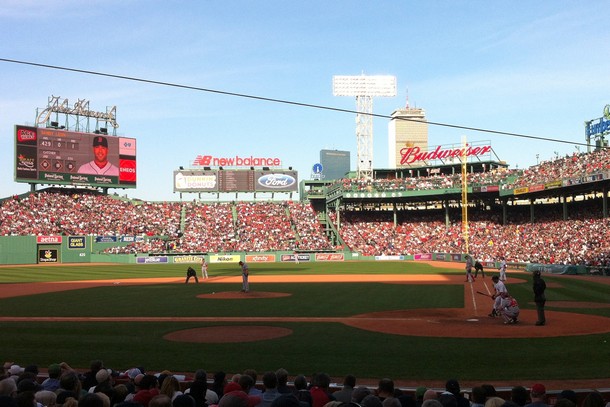 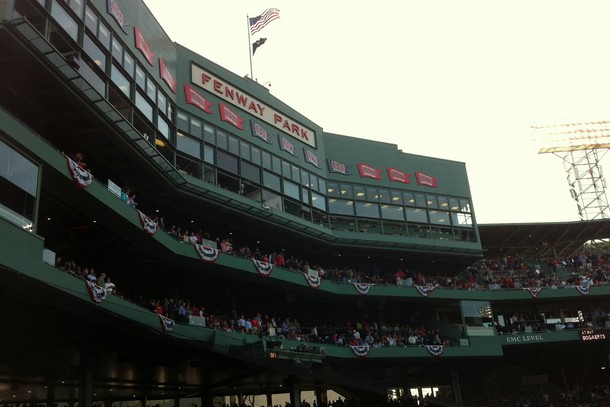 It’s hard to believe this stadium has been in operation for over 100 years! 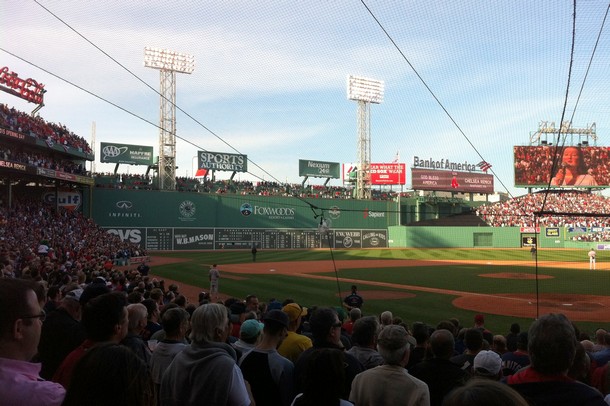 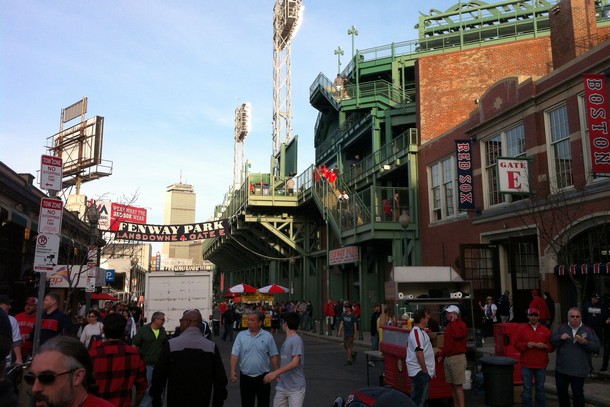 My Fenway experience was everything I had hoped it would be – grilled sausages with sauteed peppers and onions, cold pints of Sam Adams Boston lager, drunken Red Sox fans with thick Boston accents yelling at the players, a pair of homeruns and a few clutch hits, and a beautiful sunny afternoon at the ballpark (and the Tom Brady first pitch was a nice touch).

It was such a fun day. It reminded me why I love attending sports events when I travel. I even caught myself cheering for the Red Sox, which, as a loyal Toronto Blue Jays fan, is something I never thought I’d do in my lifetime. I must have been drunk…

Have you visited Fenway Park? What did you think?

If not, what stadium have you always wanted to visit?