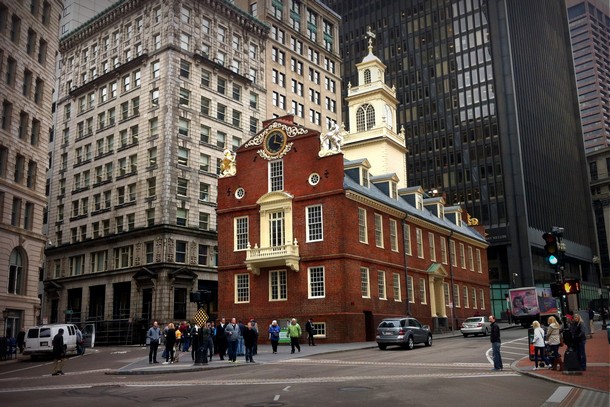 Exploring the historical streets of Boston

A few weeks ago, I visited the city of Boston for the first time. I’ve wanted to visit Boston for years. It’s one of those great American cities that everyone has to experience at least once in their lifetime. Needless to say, I was pretty stoked to see the historical city with my own eyes.

This was a solo trip without Nicole or the boys, which was a nice change of pace. I don’t get the opportunity to travel alone very often, so it was fun to explore the streets of Boston without an agenda… or baby stroller. I forgot how much ground one can cover when you don’t have to stop and wait for others.

One of the things I love doing when I arrive in a new city for the first time is wander the streets without a street map. I purposely do little research ahead of time and let my curiosity become the compass. It rarely disappoints. Of course, after enjoying a day of spontaneous sightseeing it’s important to open the brochures to make sure I didn’t miss anything I’d regret later. 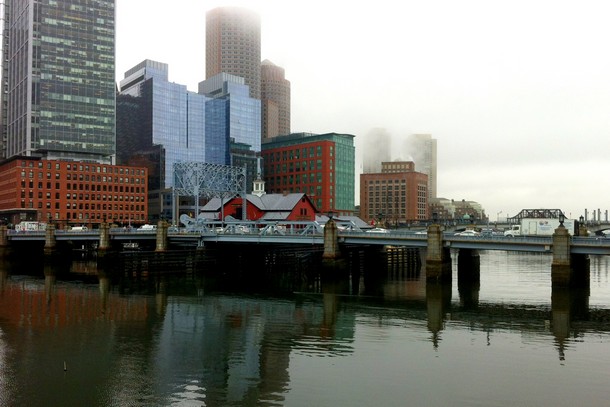 I wasn’t sure if I was going to have enough time for sightseeing, so I didn’t bring my good camera with me. As a result, all of these photos were captured with my old but reliable iPhone 4.

My journey began at the Seaport World Trade Center, which is where I my hotel was located. From there, I wandered along the waterfront towards the downtown area.

The weather that morning was overcast and foggy, which wasn’t the greatest for capturing photos, but it wasn’t raining or snowing – so I was thankful for that. 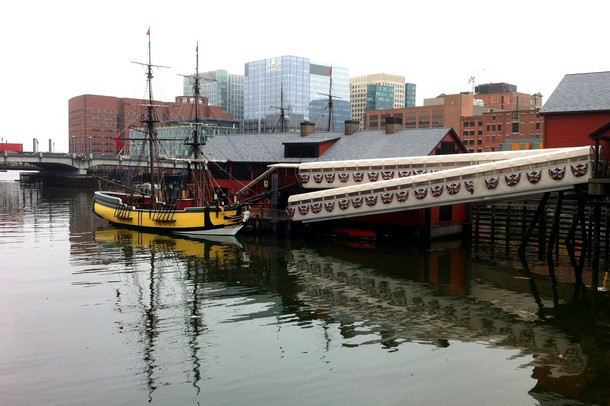 I stumbled upon the popular Boston Tea Party Ships & Museum (pictured above) without knowing it. The beautifully restored tall ship captured my attention but I didn’t have enough time to check out the museum. I later learned that it’s one of the top tourist attractions in Boston. 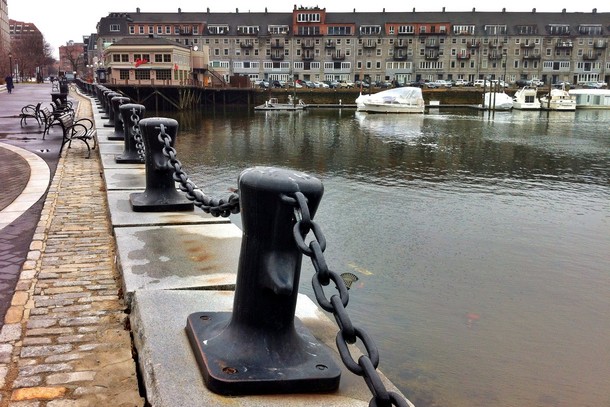 I crossed the Congress Street Bridge and turned right at the park that runs along Atlantic Ave. I continued down this park and circled around the downtown core, past the New England Aquarium, until I reached Christopher Columbus Waterfront Park.

Note – I’ve been retracing my steps using Google Maps, so I may be off a bit with my route and street names – but you get the general idea. 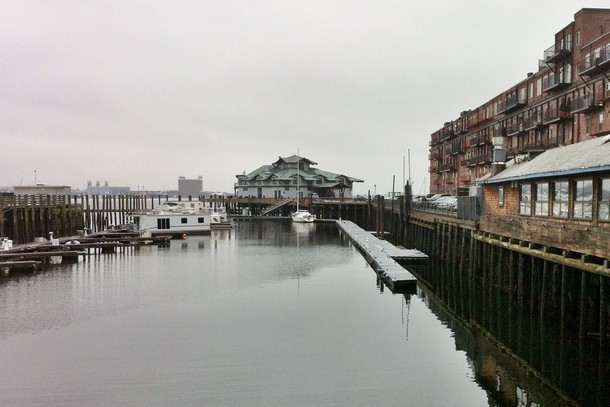 Views from the harbor front walk. 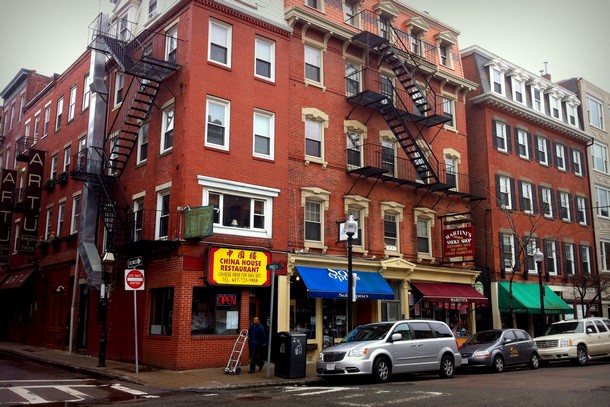 After breathing in the salty ocean air on the waterfront, I dipped into the North End, said to be the city’s oldest residential community dating back to the 1630’s. 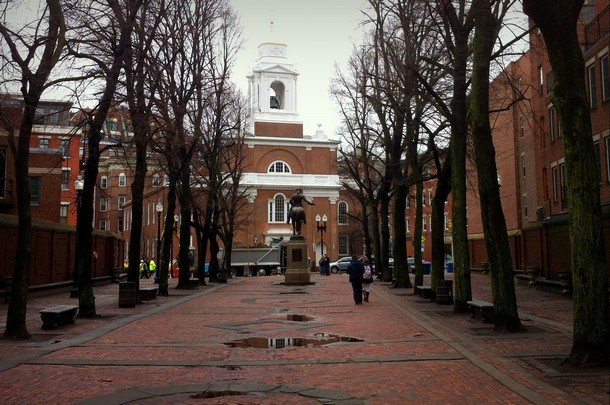 My curiosity lead me to this tall pointy white church, which is currently named St. Stephen’s Episcopal Church and formerly known as the New North Church.

As I approached the church, I noticed a large statue across the street. Given it’s size and location in the center of a long brick walkway, I assumed it was an important landmark. Sure enough, this was a statue of Paul Revere, an American legend and patriot in the American Revolution. 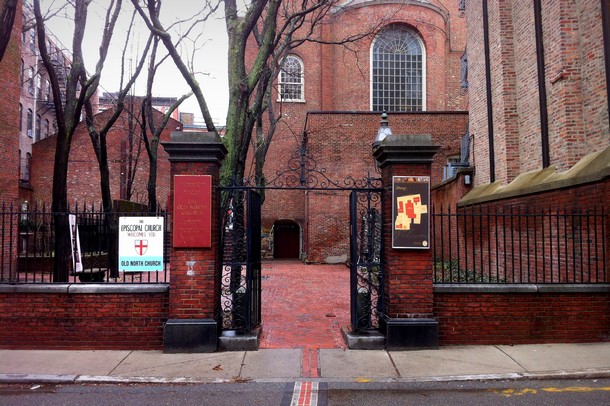 Another iconic landmark on the Freedom Trail is the Old North Church, the location from which the famous “One if by land, and two if by sea” signal is said to have been sent.

“This phrase is related to Paul Revere’s midnight ride, of April 18, 1775, which preceded the Battles of Lexington and Concord during the American Revolution.” Wikipedia 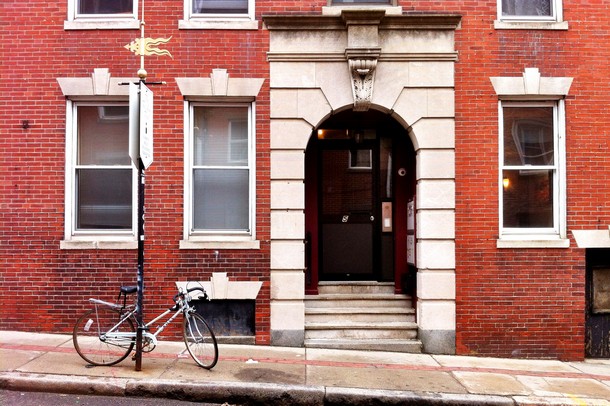 I captured the above photo in front of the towering Old North Church. Unfortunately, my trusty iPhone didn’t have the strength to capture a quality image of the church because it was mid-day and the white pillar was too tall to fit in the frame. Here’s an image of the Old North Church to give you an idea of what it looks like.

If you imagine you are standing where I would have been standing to capture the above photo, then turn to your right and look down the road – you’ll be about 20 meters away from the front entrance Old North Church. 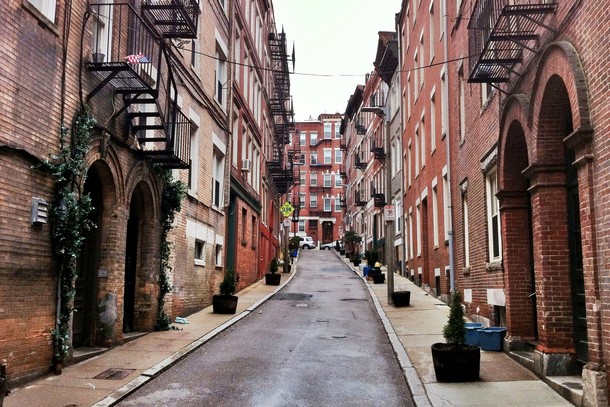 Beautiful Boston brick. These streets have seen a lot over the years. 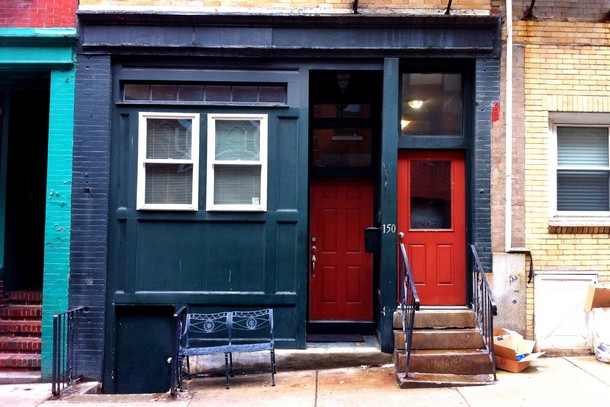 I love the colorful contrast of this building in the North End. 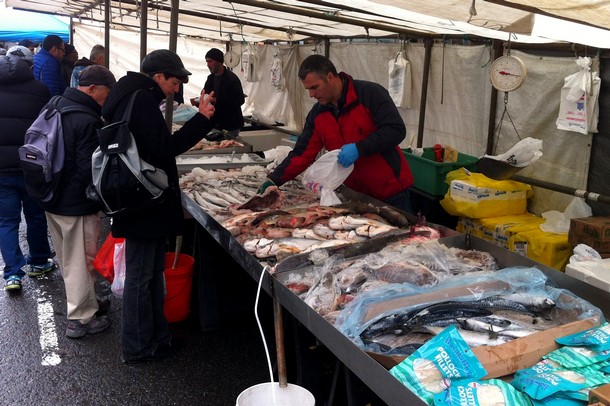 After making my way to the TD Garden to see where those pesky Boston Bruins beat our Vancouver Canucks in the 2011 Stanley Cup Finals, I somehow found myself walking through a bustling street market filled with fresh seafood and produce. I later learned that I had visited Haymarket, an open-aired fruit and vegetable market located on Blackstone Street that has been taking place for over 100 years. 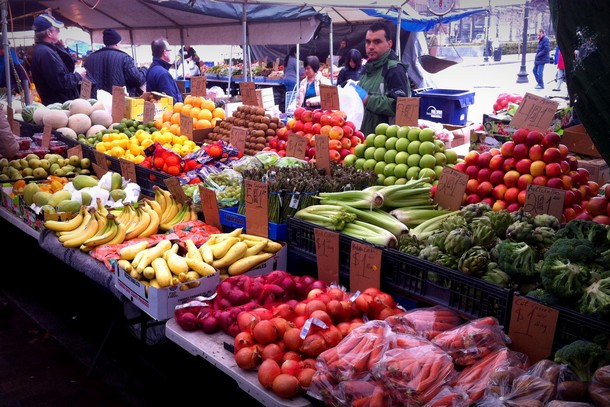 It was fun listening to the merchants shout at the passing shoppers with their thick Boston accents. I swear I heard Matt Damon and Mark Wahlberg haggling over the price of avocados. 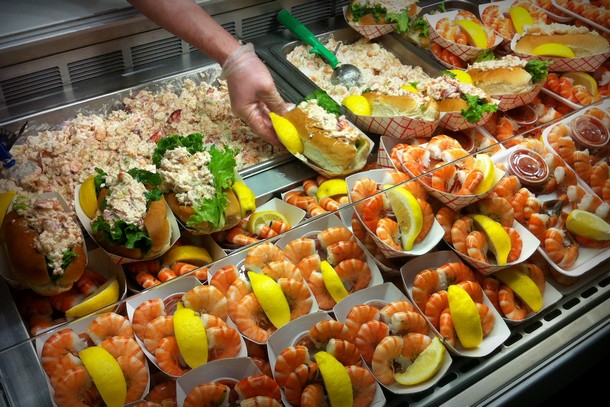 My journey continued to Faneuil Hall Marketplace where I decided it was time to rest my feet and grab some lunch. Prior to my visit, everyone told me I had to try a lobster roll. It was described as a Boston tradition so, not one to ignore the advice of others, I tried a lobster roll and paired it with a bowl of New England’s finest clam chowder. 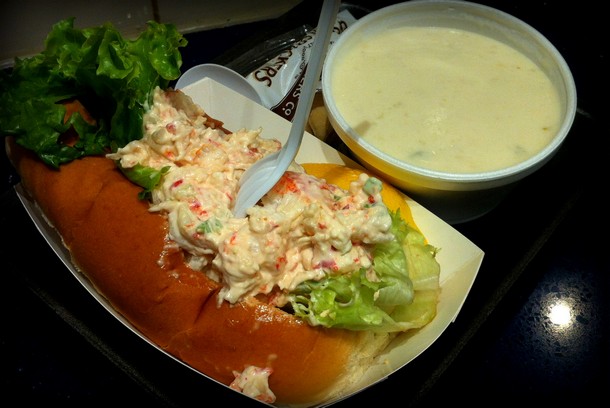 The lobster roll was pretty good but I was disappointed with the Boston Clam Chowder. It was flavorful but there was not much to it besides a few small clams and potato cubes. Perhaps my standards are too high because I grew up making gourmet soup with the Soup Meister? 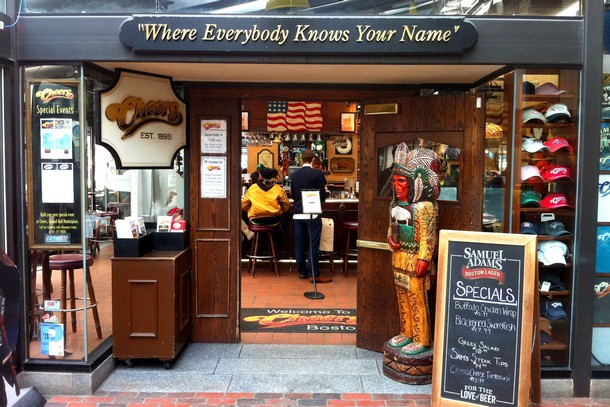 Of course, no first time visit to Boston is complete with a stop at the legendary Cheers bar – am I right? This isn’t the actual bar that the television series was filmed at but it’s a pretty good replica and it’s got all the cheesy photo opportunities you’d expect for a tourist attraction.

About 30 seconds after I took this photo a group of drunken Germans came barreling out of the bar shouting “NORM!”. Classic. 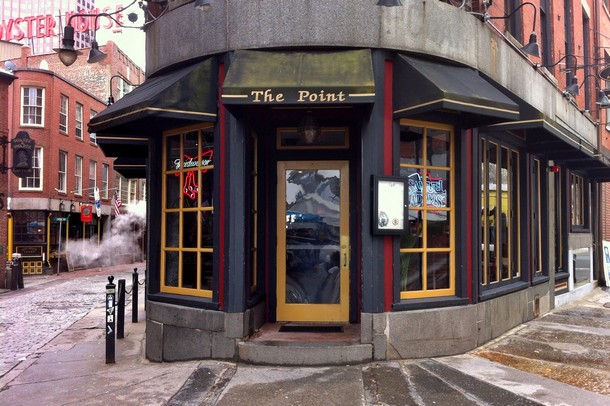 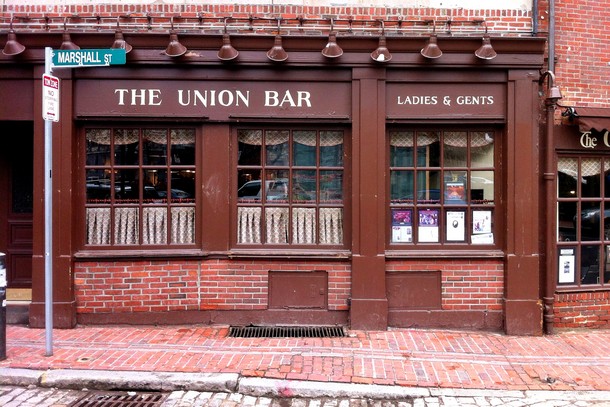 Having just eaten lunch at the Faneuil Hall Marketplace, I was too full to sample fresh oysters at Ye Olde Union Oyster House, proudly labeled as one of the oldest restaurants in the USA. Historians claim the building was constructed in 1704 and, in 2003, it was listed as a National Historic Landmark.

But don’t worry, I returned two days later and enjoyed a dozen fresh oysters and a pound of steamed mussels. It lived up to the hype. 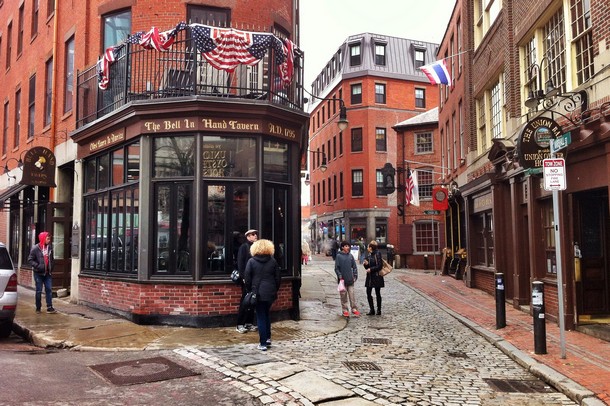 This section of cobblestone street that splits the Union Oyster House and The Bell in Hand Tavern is actually a part of the historical Freedom Trail that I referenced above. 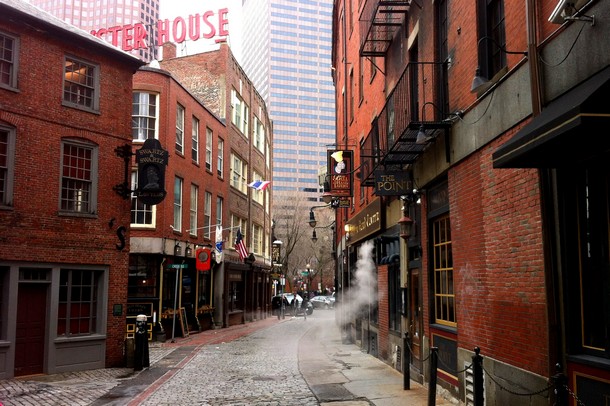 After walking through the sobering New England Holocaust Memorial located across the street from the Union Oyster House, I ventured towards the financial district. 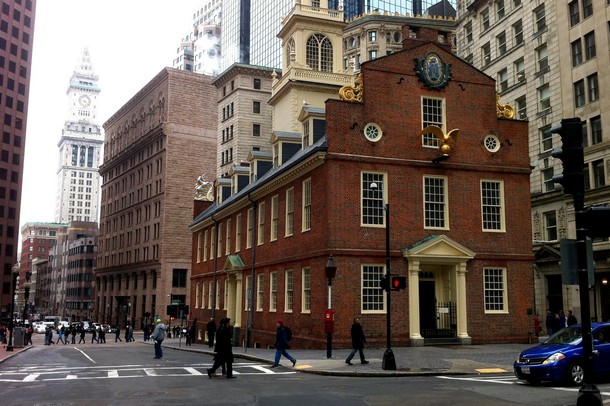 Above is the historical Old State House, located in the heart of the city at the intersection of Washington and State Streets. Built in 1713, it’s one of the oldest public buildings in the United States and was designated a National Historic Landmark in 1960. It is also one of the landmarks on the Freedom Trail. 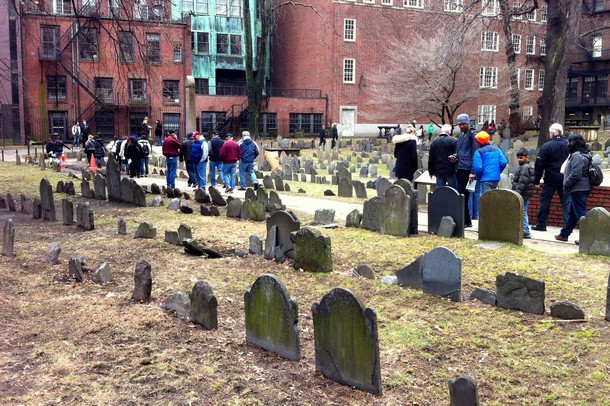 My wanderings continued through the busy financial district until I ended up at the entrance to an old cemetery. I likely would have kept walking but I noticed a few tour groups walking along the paths of the cemetery. Naturally, this peaked my curiousity, so I decided to follow the group and eavesdrop on the tour guide’s commentary. 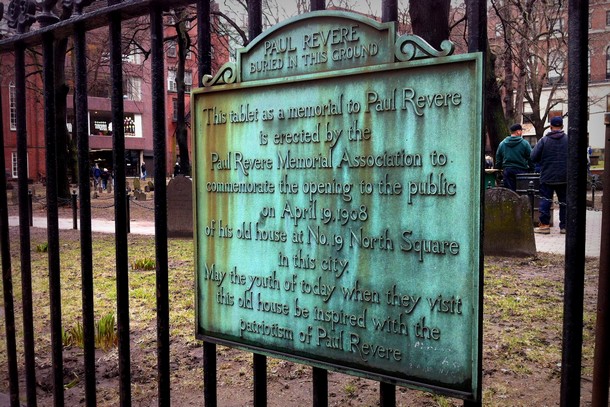 The tour guide informed his group (and me) that this is the Old Granary Burial Ground, the final resting place of some of America’s most notable citizens and Revolutionary War-era patriots, including Samuel Adams, Paul Revere and John Hancock. 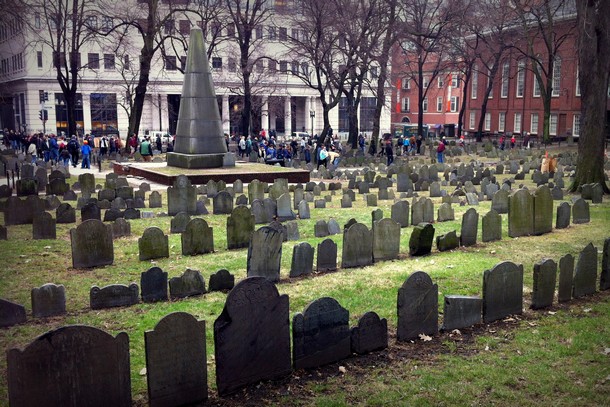 This cemetery, which is another landmark on the Freedom Trail, was founded in 1660 and is said to have more than 5,000 people buried in it. The obelisk in the center of the cemetery was built for the parents and relatives of Benjamin Franklin, who was born in Boston. 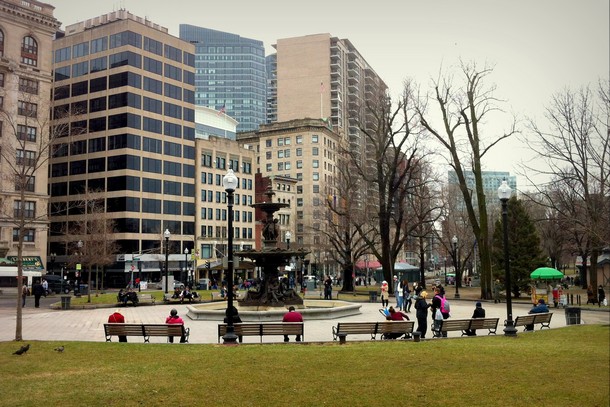 I left the Old Granary Burial Ground and followed one of the tour groups, knowing that it may lead to another interesting tourist attraction. We ended up at a large city park, which I later learned was the Boston Common. 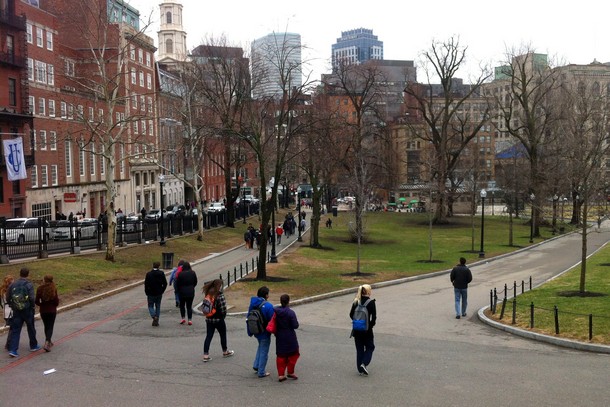 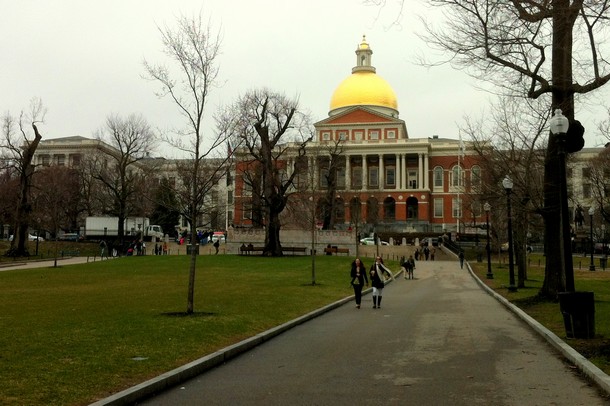 My attention was drawn to the golden-domed building that towers over the park, so I walked over to take a look. This building, I later learned, is The Massachusetts State House. 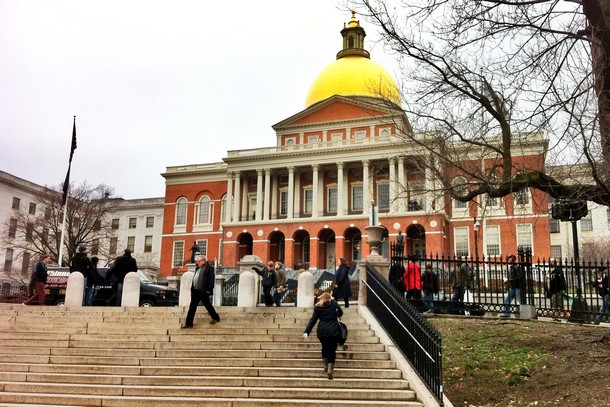 My time dedicated for random sightseeing was about to run out, so I decided to turn around and head back to the Seaport World Trade Center, which was the starting point of my walk.

I had no idea where I was, so I finally caved and opened the GPS on my phone. I was impressed by how much ground I had covered in only a few hours. It also opened my eyes to just how big Boston is. I had only covered a fraction of the city. 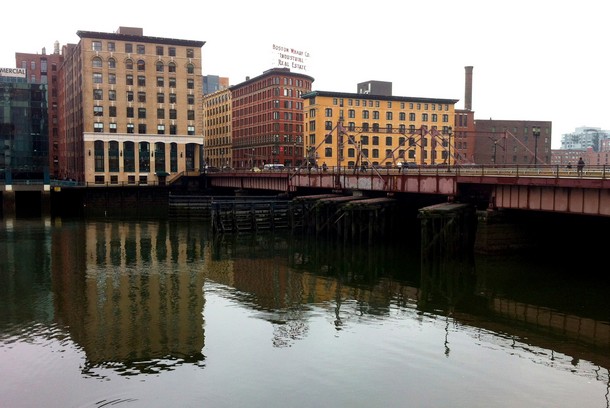 I crossed the Summer Street Bridge (pictured above) and wiggled my way back to the Seaport Blvd area. My random sightseeing route gave me a good taste of Boston and revealed some very cool neighborhoods.

And yes, there were a few occasions when Dropkick Murphys “I’m shipping up to Boston” was deliberately played while walking through the North End.

Up next – field of dreams at the Red Sox home opener at Fenway Park!

Have you visited Boston? What did you think?

Share your best tips and advice in the comments section below.