How I spent 48 hours in Nashville, TN

A few weeks ago I visited Music City for the first time. I was in Nashville attending a conference that was hosted at the iconic Gaylord Opryland Resort. Because of this, I really didn’t have a lot of time to play tourist. Most of my time was spent at the resort in meetings and giving presentations, but I did manage to sneak out and explore some of this iconic city.

This blog post is not meant to be a travel guide for Nashville. If you’re looking for some fun things to do in Nashville, read this post written by fellow family travel bloggers Caz and Craig from yTravelBlog.com.

Or, you can pick up a guide to Nashville here. 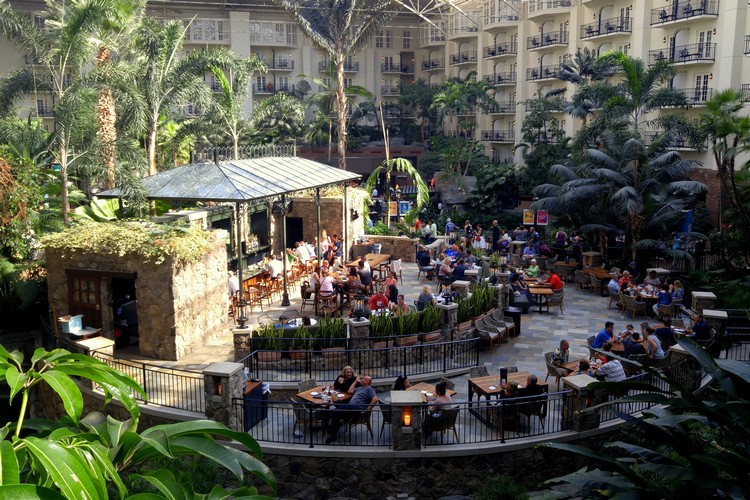 Have you heard of the Gaylord Hotels brand? I had not, prior to this visit to Nashville.

Gaylord Hotels consists of four large hotels with convention centers (with another one being built, says Wikipedia). The Opryland Hotel was originally built to support the nearby Grand Ole Opry, a legendary concert venue for country music, and has since expanded to almost 3,000 rooms.

In other words, it’s FREAKIN HUGE!

When our taxi pulled up to the hotel I was shocked at the size of the property. The entrance felt like a Las Vegas hotel on the strip. We had to wait in the vehicle line up for 10 minutes just to get dropped off at the hotel entrance.

I want to make it known that I did not work with the Gaylord Opryland Resort on this trip to Nashville. I am not promoting the hotel and received no compensation to highlight it in this blog post. But I did spend a lot of time at this hotel, so I feel it’s worth mentioning because the resort is actually quite unique. It feels more like a shopping mall and theme park then a hotel.

As you can see from these photos, this hotel is a tourist destination all on its own. 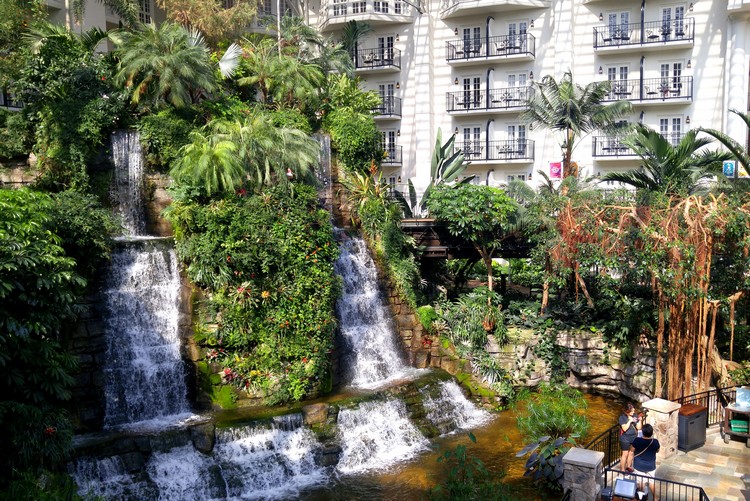 Indoor waterfall beside one of the 15 restaurants in the resort. 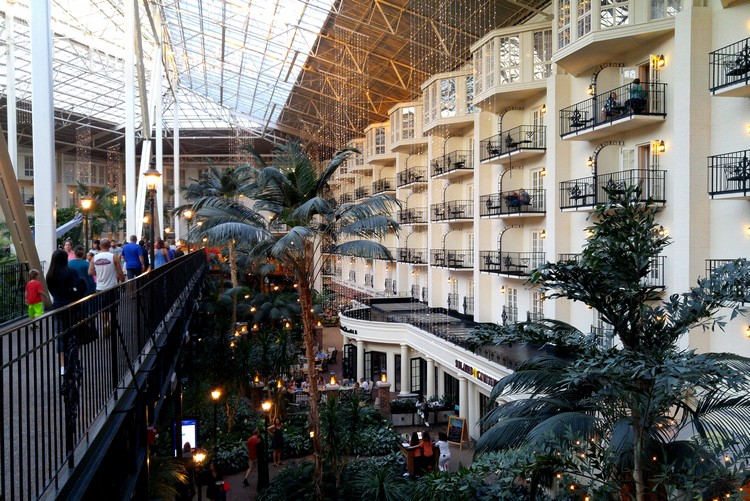 Above and below: Indoor walkway above one of many gardens inside the hotel. It’s strange, you feel like you’re outside because of all the trees and high ceilings, but you’re actually inside an air controlled building. You kinda feel like you’re in a massive biodome. 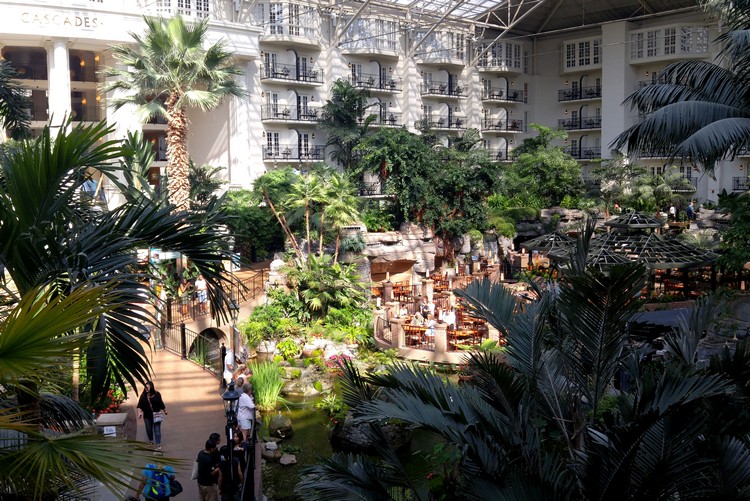 Another restaurant and walkway inside the hotel. Although it looks like the above photo was captured from the outside of the hotel, every thing you see in the image is actually indoors. It’s quite the sight. You can even take a riverboat tour around the hotel. How insane is that? There is a mall on the Delta Island that has a fun New Orleans vibe. Entrance to the Delta Island. 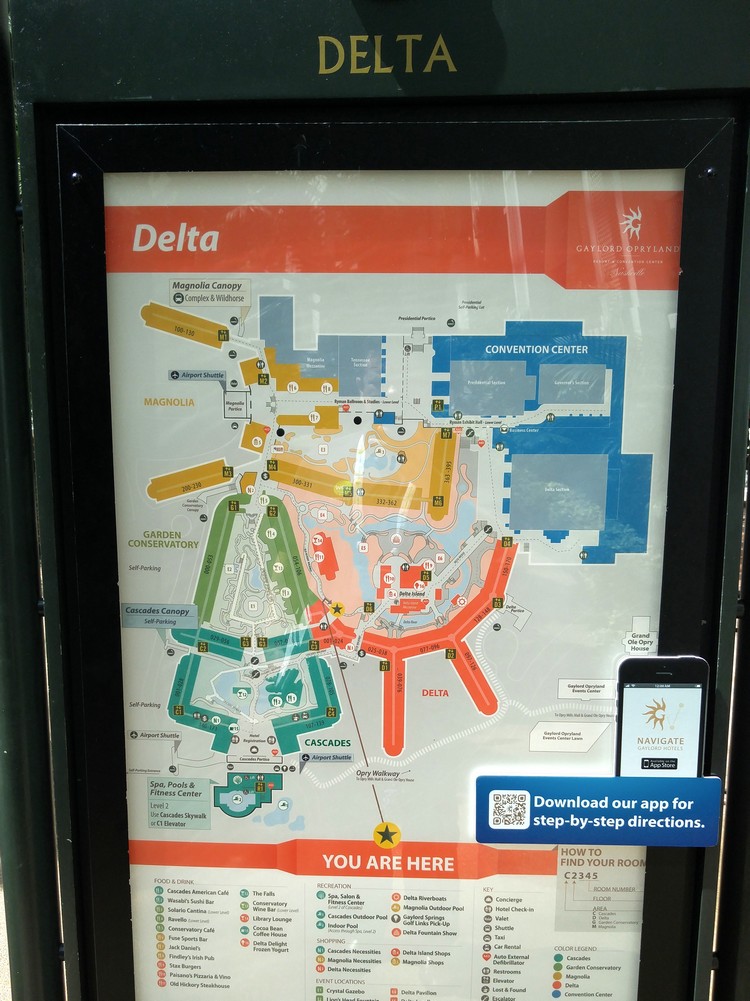 The resort is so big it needs floor plans posted throughout the property. You can even download an app for step-by-step directions. It took me 20 minutes to get from my hotel room to the convention center each day. You can’t go to Nashville and not indulge in some traditional Barbeque. While at the conference, I asked a few residents of Nashville where I should go to get the real deal.

Without hesitation, each person I spoke to recommended Martin’s BBQ Joint. So, it was decided. I joined a few others and we took an Uber to Downtown Nashville for some BBQ.

Our mission – stuff our faces with meat and beer. We succeeded.

When we entered the restaurant we were given the rundown on how things work at Martin’s BQQ Joint. It’s a little different than typical restaurants. Instead of being seated at table and served, you stand in a windy line-up with your menu in hand and wait your turn to order your food and drinks at a cashier.

I’m not a big fan of this style of service, but when in Rome. 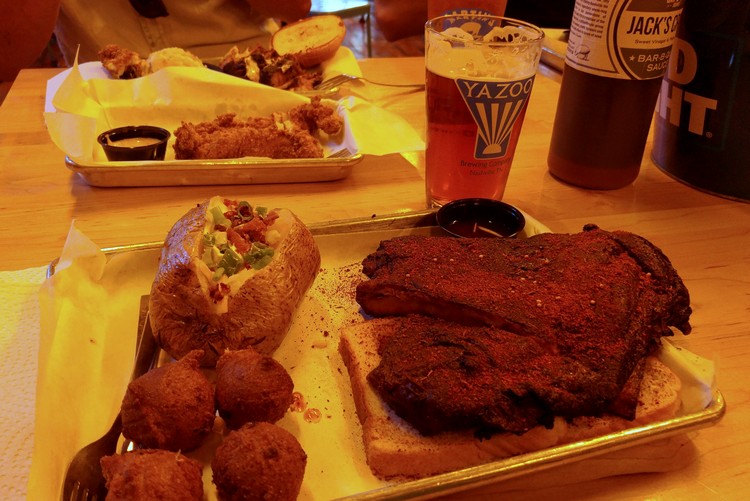 I ordered 1.5 lbs of BBQ spare ribs with a loaded baked potato and side of Hushpuppies. We also shared an order of fried catfish fillets. It was a LOT of food. I was close, but failed to finish my food (**hangs head in shame**).

The ribs were so tender that the meat literally fell off the bone. The cashier recommended I get the dry ribs instead of the ribs smothered in BBQ sauce. It was the right choice. The platter comes with several dipping sauces, so there was no need to have the meat covered with BBQ sauce.

The fried catfish was okay – it tasted like chicken. The hushpuppies were disappointing – they were basically a ball of fried bread (very dry). Overall it was a good experience, but I think I went in with unrealistic expectations.

Apologies for the above orange-ish images – the lighting inside the restaurant wasn’t very good and I only had my phone with me. Above – this is the line-up just to get inside Martin’s BBQ Joint. It wrapped around the building. I tried to capture the neon sign with the long line-up, but the photo didn’t turn out the way I thought (I may have been in a BBQ rib coma at the time). I was told every first time visitor to Nashville should walk up and down Broadway Street, at least once. I received mixed reviews about Broadway Street. Some people said it was the best place to spend an evening. Others said it was dirty, loud and overrated.

Of course, I had to see for myself. 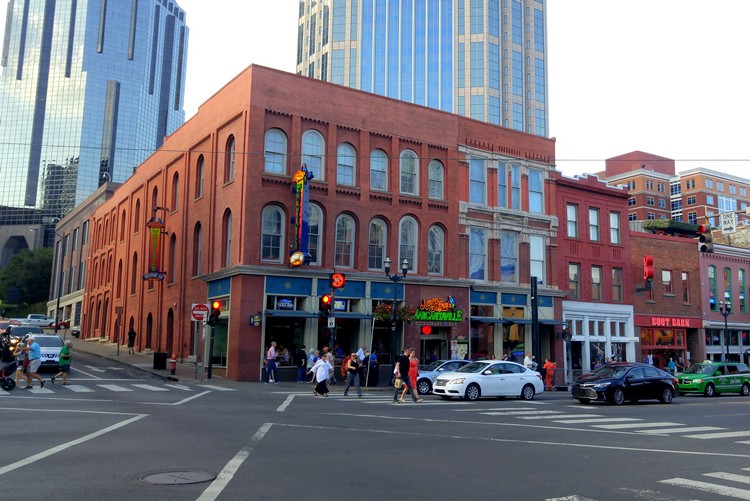 I love the old brick architecture and neon on Broadway. It certainly has lots of character. 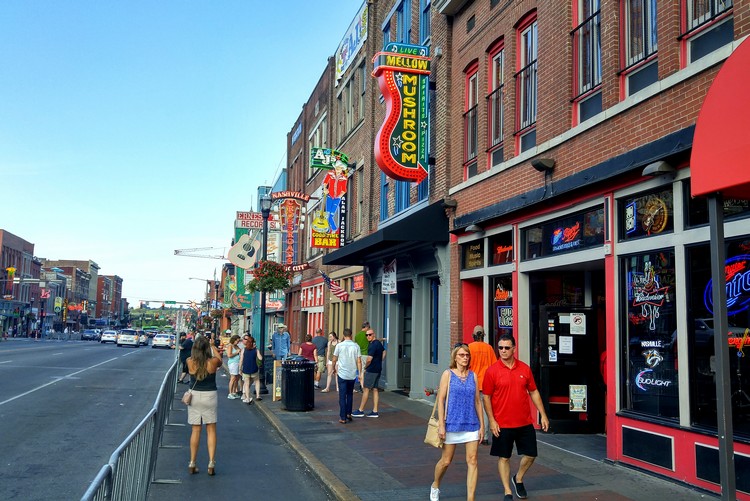 It was fun to experience Broadway but I’m not sure I would spend more than one night on the strip – it gets old quick. There are drunk tourists everywhere, so you have to be open to some colorful language and loud talking. 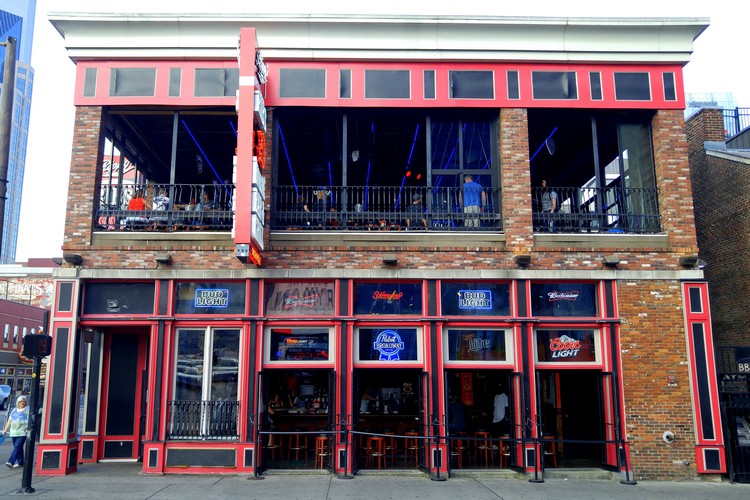 Almost every bar on Broadway has live music, which is quite impressive. And the musicians are all very good. It’s crazy to think how many incredible musicians are in Nashville at any given moment. 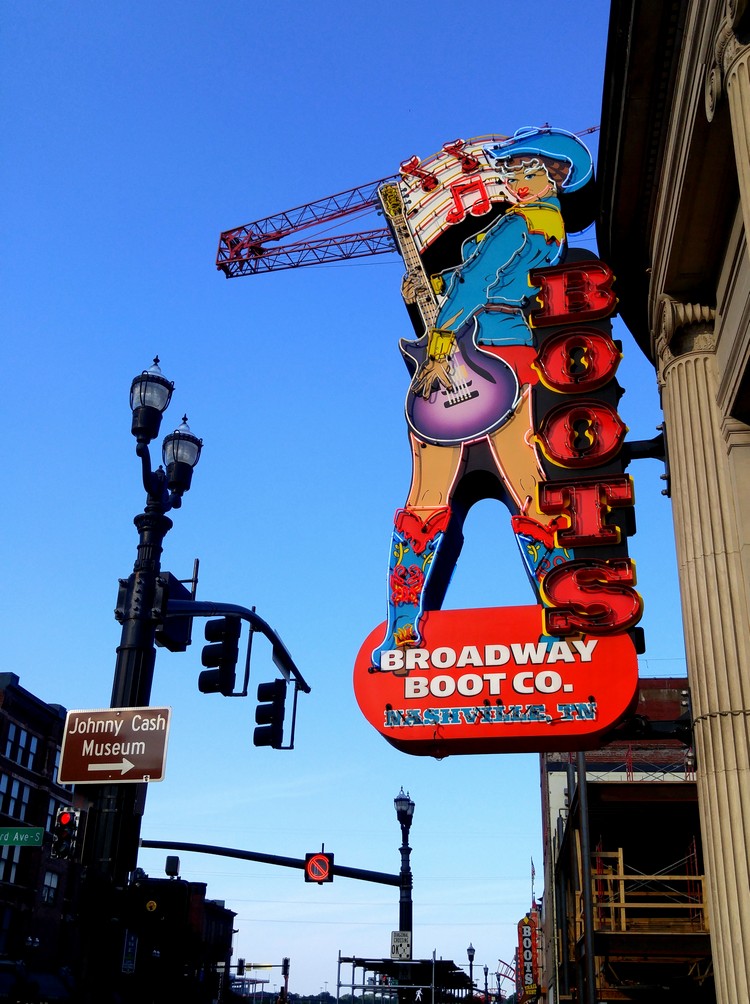 Neon, neon every where. I love all the neon on Broadway. 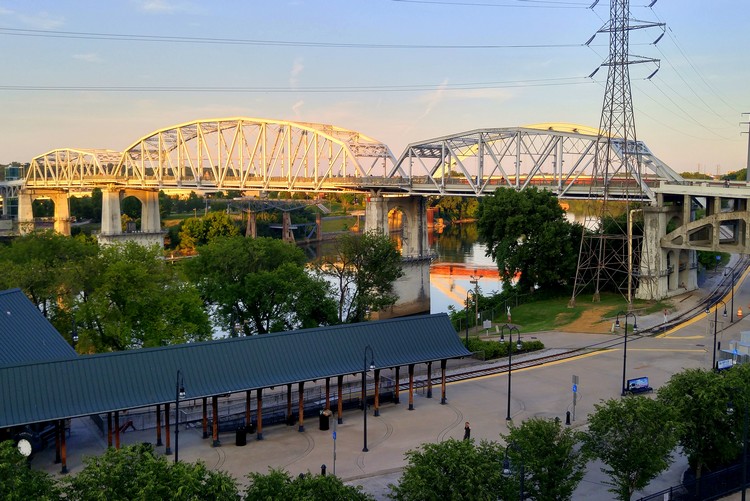 I was told to head to the rooftop bar of Acme Feed & Seed, an eclectic 3-level restaurant located in a heritage building that overlooks the Cumberland River.

Unfortunately the rooftop patio was full when we visited, but I did manage to grab a few photos. 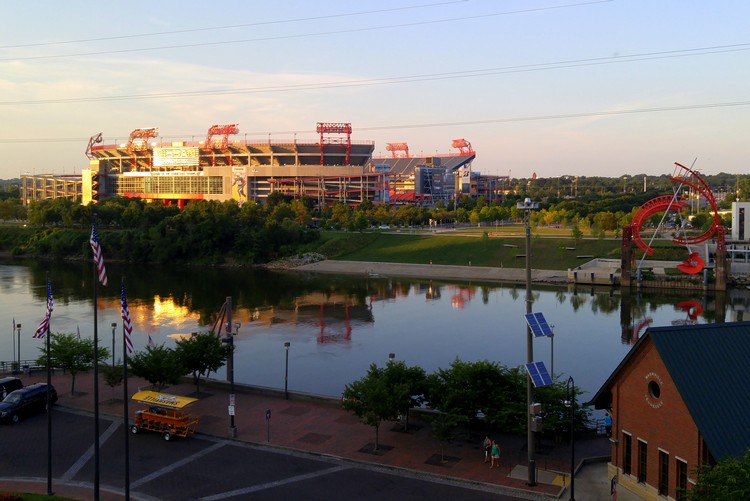 No trip to Nashville is complete without listening to live country music at a honky tonk bar. Honkey Tonk Central was highly recommended but there are plenty of bars to choose from.

We spent a few hours drinking Jack Daniels and listening to live music. I’m not really a fan of county music, but it was a good time. 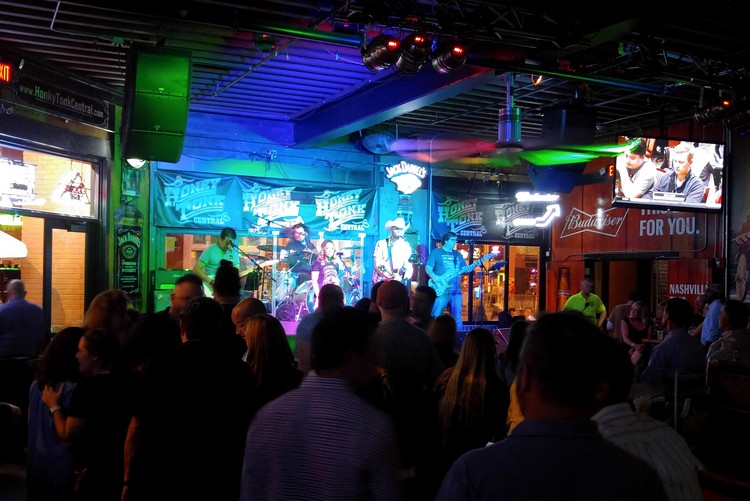 I don’t know who this girl is, but she was awesome. Such a big voice for such a small girl. 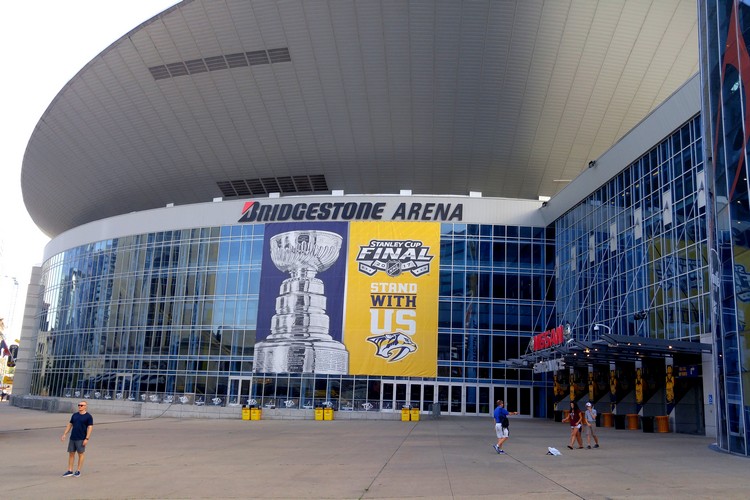 The Nashville Predators made it to the Stanley Cup Finals this year and Broadway Street was transformed into an outdoor celebration site (more than usual, that is). The street was blocked off to vehicle traffic and thousands of fans poured into downtown Nashville to watch the live hockey games.

I remember thinking to myself, that looks like such a fun place to be. It was pretty cool to see the stadium in person and re-live those Stanley Cup Finals memories. 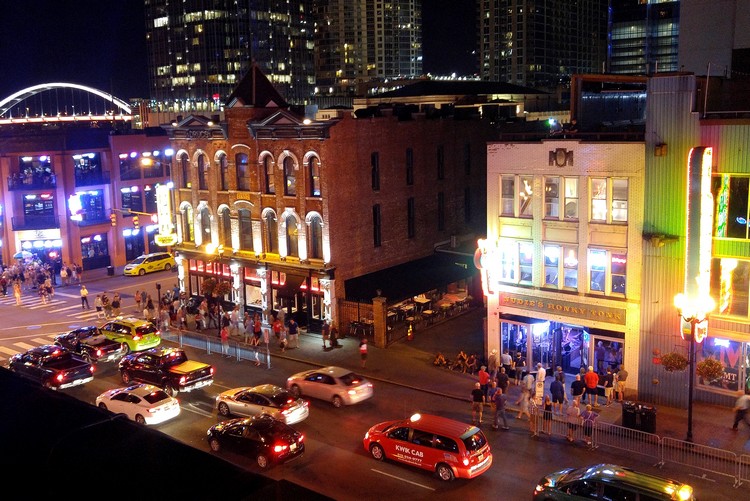 As night took over, we headed to the rooftop bars on Broadway. It’s great that there are so many bars so close together. We went on a pub crawl and visited four different bars.

It’s a fun atmosphere, even on a Tuesday night! Nashville is a unique city. I enjoyed my time there, but it didn’t grab me like other American cities have (especially Boston and Chicago – my favorite US cities). However, I only had a few days in the city and I was there on a work trip, so my experience is quite limited.

I’m not much of a county music fan, so most of what makes Nashville great is lost on me. I had no interest in visiting the music museums or attending a show at the Grand Ole Opry. It’s just not my cup of tea.

But, if country music is your thing, you’ll love Nashville.

Have you visited Nashville? What did you think?

Share your thoughts and travel tips in the comments section below.