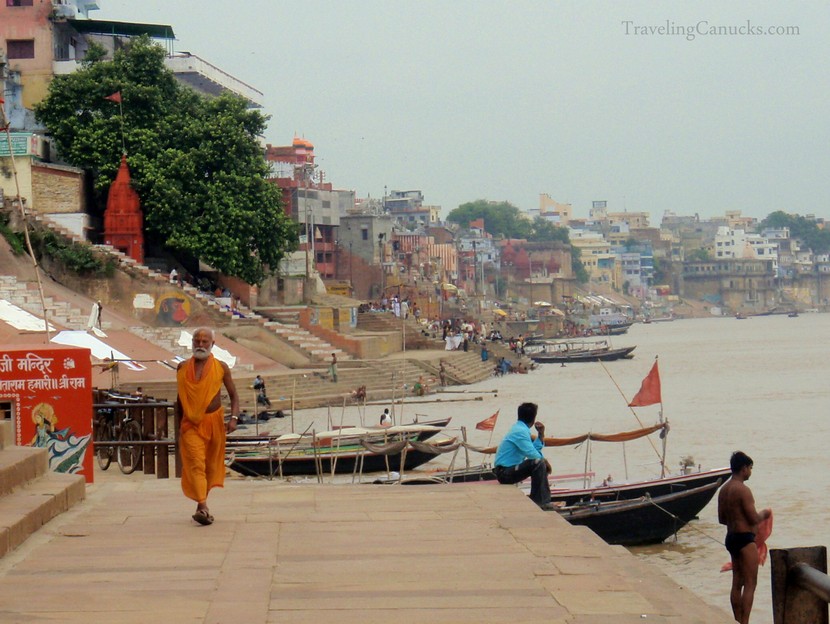 The Holy City of Varanasi and the Sacred Ganges River

“Benaras (Varanasi) is older than history, older than tradition, older even than legend and looks twice as old as all of them put together” – Mark Twain

Varanasi, one of the oldest continuously inhabited cities in the world, was the first stop on our travels through Northern India. Everyone we talked to had interesting feedback about travel in India, leading us to believe that the coming month was going to be challenging.

As they say, “You cannot call yourself a world traveler until you experience India”.

We didn’t appreciate the true meaning of this statement until several months after leaving India. The border crossing from Nepal to India was an adventure on its own. We spent the entire day and night taking various methods of transportation, including two taxis, three rickshaws, three buses and an overnight train. It was quite the ordeal.

Our overnight train arrived in the darkness of early morning, not an ideal time to start looking for hotel accommodations but it all worked out in the end. The lesson learned – money talks in India!

The culture and pulse of Varanasi is closely tied to the sacred waters of the Ganges River, which has drawn billions of devote worshipers over thousands of years. Think about that for a moment.

The Ganga Ghats (a series of stairs that line the river banks) are full of pilgrims who flock to the Ganges River to take a dip in its holy waters, believed to absolve one from all of life’s sins. You don’t have to walk too far to find an ancient temple or shrine that dates back several hundred years.

It is literally a living outdoor museum. 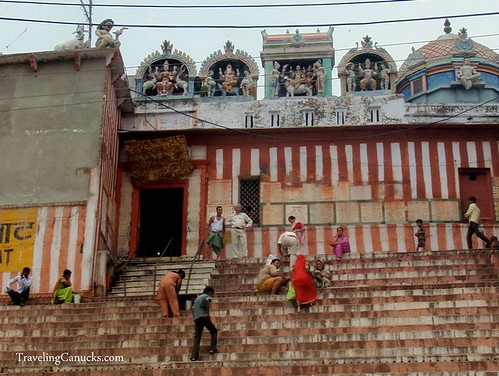 The Ganges River is the centre piece of life, and death, in the spiritual city. Hindus believe one can obtain salvation and freedom from the cycle of birth and re-birth by dying in the holy land of Varanasi, which is why there are hundreds of daily human cremations at the Burning Ghats that rest on the river banks.

It’s hard to describe the feelings we had while watching human bodies’ burn right in front of us.

The unmistakable smell of burning flesh, the heartbreaking sounds of grieving family members in mourning, the thick clouds of black smoke that fill the air, and of course, the hundreds of curious eyes that stared at us during the death ritual.

It was awkward and uncomfortable. We felt that our presence as tourists was unwelcomed, as if we were invading the family’s privacy during such an emotional and personal time. We agreed, knowing that we would likely feel the same way if the tables were turned. We respected their space and decided it was best to leave. 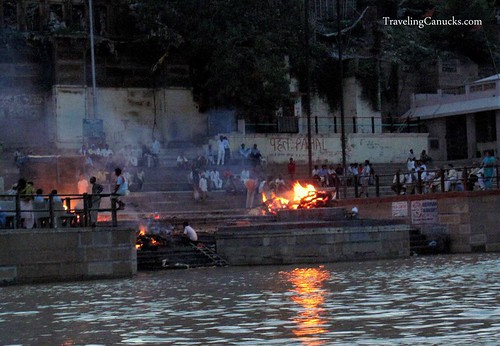 The photo above was taken from an old wooden rowboat that we hired to take us up river at sunset. It provides an interesting perspective of the human cremations at the Burning Ghats on the Ganga River. When the bodies have completely burned, the ashes are swept into the holy river. 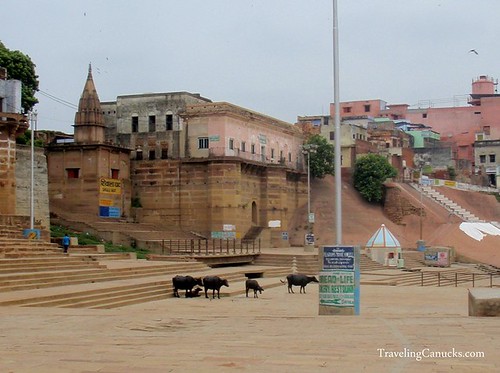 Although the holy river is a lifelong destination for many, it is also said to be the most heavily polluted river in the world. It didn’t take us long to see why. Toxic sewage and garbage is funneled directly into the river from the chaotic city above, with little regard for its environmental impact. Livestock bathes in the murky waters as the ashes and remains of cremated humans slowly float downstream.

Even with the toxic residue and garbage floating on the surface, thousands of people still bathe and drink the water, “cleansing” themselves of their sins. It’s easy for us to develop an opinion on this potentially fatal practice of drinking sewage water, but who are we to cast judgment on a ritual that has taken place for thousands of years. 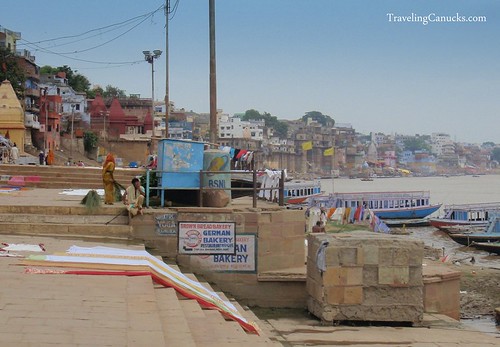 Above: Laundry drying on the Ghats 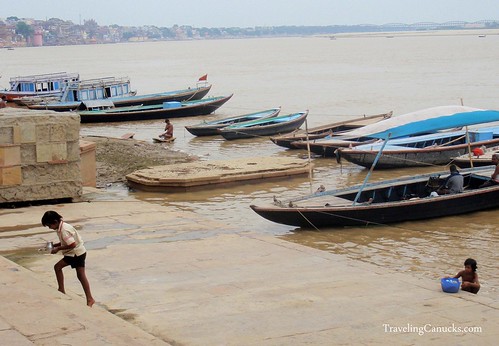 Above: A young boy delivering food to the local fisherman at the river harbour 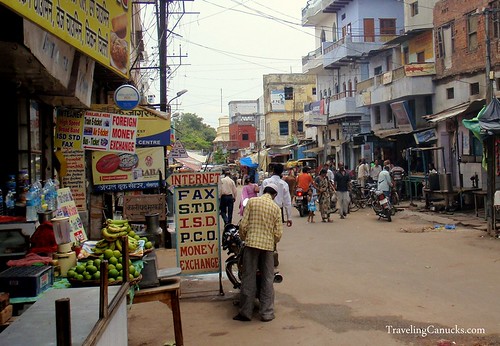 Above: The bustling streets of Varanasi in the old quarter 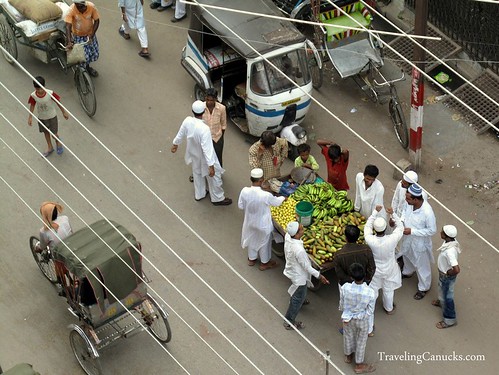 Above: Views of daily street life from the rooftop of our hotel 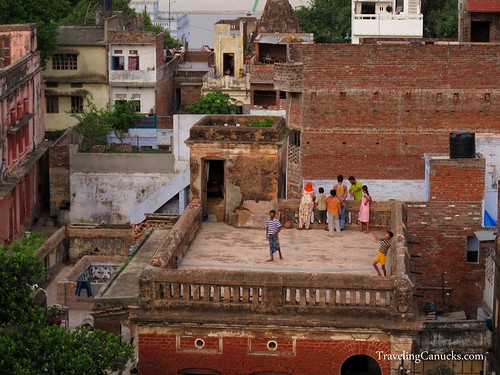 Above: A family flying kites in the evening from the rooftop of their building.
The skies fill with colourful kites at sunset, a popular family activity 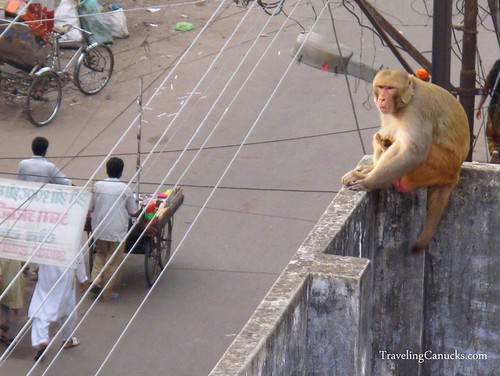 Above: A monkey strategizing where his next meal will come from.
We quickly realized that the residents don’t like the monkeys very much! 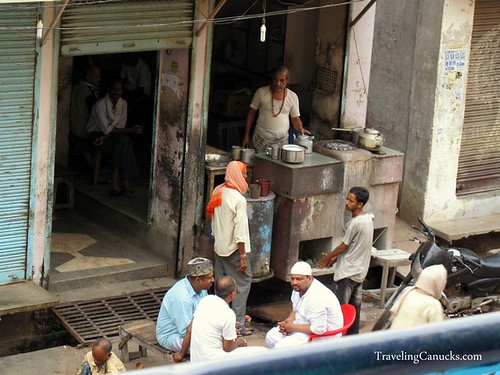 Above: A popular Chai House across the street from our hotel

Below: Children playing cricket in the old quarters of the city, the Ganges in the backdrop 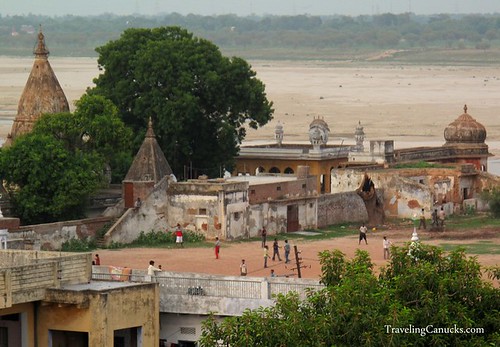 We are not religious people, but as we wandered around the congested labyrinth of Varanasi’s Old City and sat on the dusty Ghats that line the banks of the Ganges, we couldn’t help but feel a sense of spirituality.

Though tourism has become increasingly important, and street touts relentlessly try to sell you anything and everything, the city still manages to hold tight to its rich culture and time-honoured traditions. We were, and are, thankful for this. 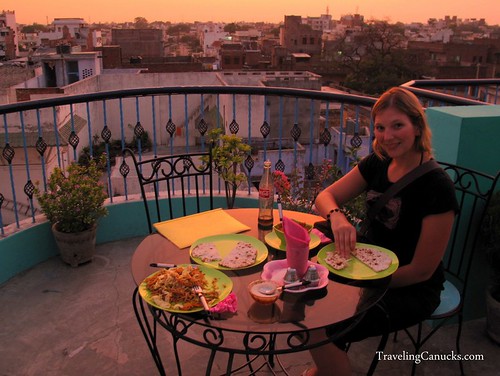 There are several images that come to mind when we reflect on our time in India’s holiest city. Clearly, the sight of a burning body is not easily erased from our minds. Ironically, death is very much a part of life in Varanasi.

But our most memorable moments were spent on the rooftop of our hotel, where the street-level chaos disappears and families gather on the rooftops to share a meal, socialize, pray and fly kites. The soothing Muslim call to prayer vibrates off the buildings and echoes across the city. Children laugh, fathers smile with pride. Everything becomes peaceful and calm.

It was during those special moments that we felt the spirit of India.

Have you visited India? What are your most memorable moments?
Share your stories in the comments section below!