How to Spot a Whale Shark in the Belize Barrier Reef

Snorkeling with a whale shark has always ranked high on Nicole’s bucket list. It’s one of those rare natural encounters that few people get to experience in their lifetime.

The gentle giants, which can grow as long as 41 feet, are not dangerous creatures and should not be confused with killer whales or sharks with sharp pointy teeth. 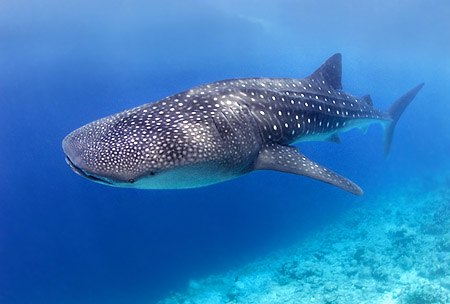 A few years ago, when we were planning our Round-the-World adventure, we researched the best locations to find whale sharks. Our hope was to have an opportunity to swim alongside the world’s largest fish, but our itinerary didn’t bring us close enough.

Whale sharks only migrate to certain locations around the world, searching for specific food sources like plankton, microscopic plants and fish eggs. Even if you’re lucky enough to be in the right place at the right time, there is still no guarantee of a whale shark sighting.

Though the elusive shark can be seen in many of the world’s tropical seas, there are a few places where your chances of success are much greater. Along with Mexico and Honduras, Belize is one of the most popular locations in the Americas to spot whale sharks.

Gladden Spit in the Belize Barrier Reef, located about 26 miles off the coast of Placencia, hosts a high concentration of whale sharks during the months of April and May, when schools of cubera snapper are actively spawning in the area.

Gladden Spit is also a protected area, so the park rangers only allow six tour operator boats at a time, which contributes to the intimacy of the experience.

We spoke to several Belizean locals, scuba dive shops, and tour operators, curious about the best time to spot a whale shark. Depending on who you ask, each person has a different opinion with conflicting results.

Some say your chances are highest 3 days BEFORE the full moon, some say 3 days AFTER the full moon, others say its THE DAY OF the full moon. But everyone will agree that it’s most likely to see the whale sharks surrounding the full moons of April and May, although even that’s not guaranteed (sometimes Mother Nature doesn’t read the tourist brochures). How do you find the Whale Sharks?

Unlike a whale, whale sharks do not need to surface for air, making them very difficult to spot. Eric, our fearless snorkeling guide with Splash Dive Center, briefed us on the unique process for spotting the underwater giants.

The process is actually quite fascinating.

When Eric originally explained it to us we thought he was playing around with our ignorance. He wasn’t.

Belizean tour operators have fish tracking systems installed in their boats that search for schools of large fish that frequent Gladden Spit. The ideal fish they look for is the Cubera Snappers because the whale sharks like to eat their eggs.

Once a school of snappers are found, scuba divers enter the water and follow the fish. When the scuba divers get close enough, they collect in a circle above the fish and link arms together.

Eager snorklers rest on the ocean surface, intently focused on the deep blue sea, searching for shadows in the distance.

Thousands of tiny bubbles float towards the surface, simulating the cloudy spawning process of the snapper. The whale sharks, not being the most intelligent creatures, are tricked into thinking that the bubbles are actually its food source. They rise from the depths of the deep blue to feed, their huge mouths wide open, scooping up the bubbles.

The more bubbles the scuba divers can make, the better the chance of attracting the whale sharks! When we arrived in Placencia, our spirits were high.

Our tour with Splash Dive Center was strategically planned for the day of the full moon in May, one day after our snorkeling trip to Laughing Bird Caye. We couldn’t have timed it better if we tried.

Now it was up to the whale sharks and mother nature to cooperate.

We were warned that the full moon can bring on high winds and rough seas, so we were pleasantly surprised this was not the case on the morning of the tour. The winds were calm, the water was like glass, the sun was shining – everything was falling into place.

The Burning Question – Did we get to Snorkel with Whale Sharks?!

When we first jumped into the water it was a strange, creepy feeling. The warm water was so dark and blue, with nothing in sight except scuba divers 50 feet below. In every direction, all we could see was the water slowly changing from indigo blue to black, then nothing.

We found the snorkeling to be a great way to search for the sharks. Warren, our adventurous boat captain, was constantly in talks with the other boats, giving the snorkelers a slight advantage over the scuba divers. If other divers have better luck 100 feet away, snorkelers can easily jump back in the boat and get dropped closer to the action.

Our first two attempts in the morning were unsuccessful.

After about an hour in the water, we took a break and left the protected area for lunch and snorkel in the shallow coral reef. It was amazing that in such a short distance, the water went from thousands of feet deep to less than 10 feet.

Our team had positive feelings for the afternoon sessions.

As soon as we re-entered Gladden Spit, we spotted a pod of dolphins. We immediately jumped into the water and swam with them for a few moments before they got bored and moved on. Then the scuba divers descended and began simulating the spawning process again. We started to get that warm, fuzzy feeling when we saw a school of thousands of fish followed by three remora fish, commonly found attached to sharks.

The moment felt right, so we floated on the surface and waited with anticipation.

After about 45 minutes of following the scuba divers, Eric made the call.

We would head back the boat. Although the stars were literally in alignment, the elusive shark was just to shy to make an appearance.

Sadly, nobody saw a whale shark that day.

As Eric put it, “This is the ocean, we never know what we’ll see”. We were reminded that spotting whale sharks in the open ocean is like going on an African safari and spotting a leopard, there’s never a guarantee.

Although we were disappointed that we didn’t spot a whale shark, it was still an incredible experience swimming in the deep blue sea of the Belize Barrier Reef. It’s not every day we get to play in the world’s second largest reef system!

Have you ever seen a Whale Shark in its natural habitat?
Share your experience in the comments section below!

Editor’s Note: Our whale shark tour with Splash Dive Center was complimentary, however the thoughts and opinions shared in this post are entirely our own