We often talk about the importance of getting away, even if only for a few days. As a young family with a seemingly never-ending list of things to do, it’s easy to put life on hold while we attempt to cross each item off that nasty list. But, the thing about to do lists is that they never end.  The moment you cross one item off the list, you inevitably add a new one.

Because of this, it’s important to put in the extra effort and create travel opportunities whenever you can. Travel does not always mean boarding an air plane. In fact, some of our most memorable travel experiences have happened on road trips. Living in British Columbia gives us plenty of options for short road trips. It’s one of the many reasons we love living here.

Last weekend we had an opportunity to visit Manning Park, a provincial park in the Canadian Cascades of central British Columbia, located about 3 hours drive east of Vancouver.

The provincial park is quite large, spanning over 70,000 hectares, but most people visit Manning Park Resort and the campgrounds near Lightening Lake. The closest town is 68 km from the core area of the park, which gives you that feeling of being in the middle of nowhere, surrounded by nature’s beauty.

We’ve only been to Manning Park once before, a quick overnight stay at a campground while on a road trip to the Canadian Rockies a few years ago. It’s always fun discovering a new part of British Columbia. 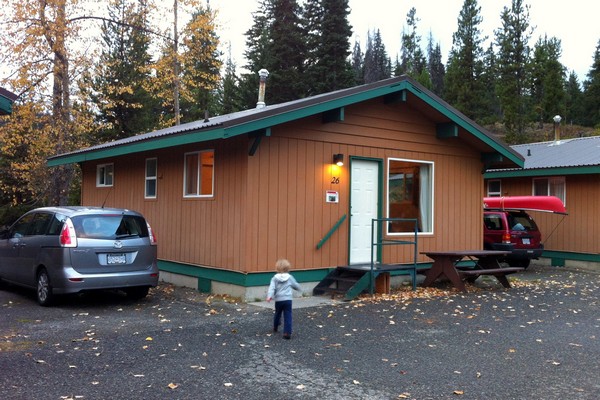 The main reason we chose Manning Park was because it offers private cabins rentals.

The wooden cabins are perfect for families because they come with fully equipped kitchens, two separate bedrooms and a living room. One of the rooms had two sets of bunkbeds, which was a clear winner for Braydon.

We’re not quite ready to brave tent camping with our little boys and October is far too cold to sleep outdoors at that elevation, so the cabins offer a great compromise. 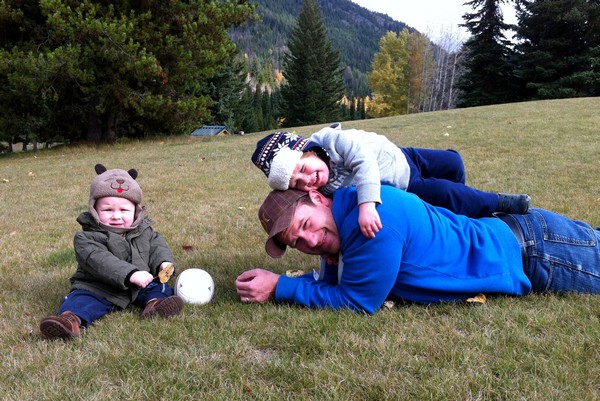 The rustic resort is surrounded by mountains, forests and lakes, so there’s plenty of outdoor adventure right outside your door. It’s a four season destination, with a small ski hill nearby, but the best times to visit Manning Park is during the summer months.

We knew we were rolling the dice by visiting in mid-October, which is typically cold and rainy. It did rain, and it was quite cool, but you can’t beat that crisp mountain air and bright autumn colours. 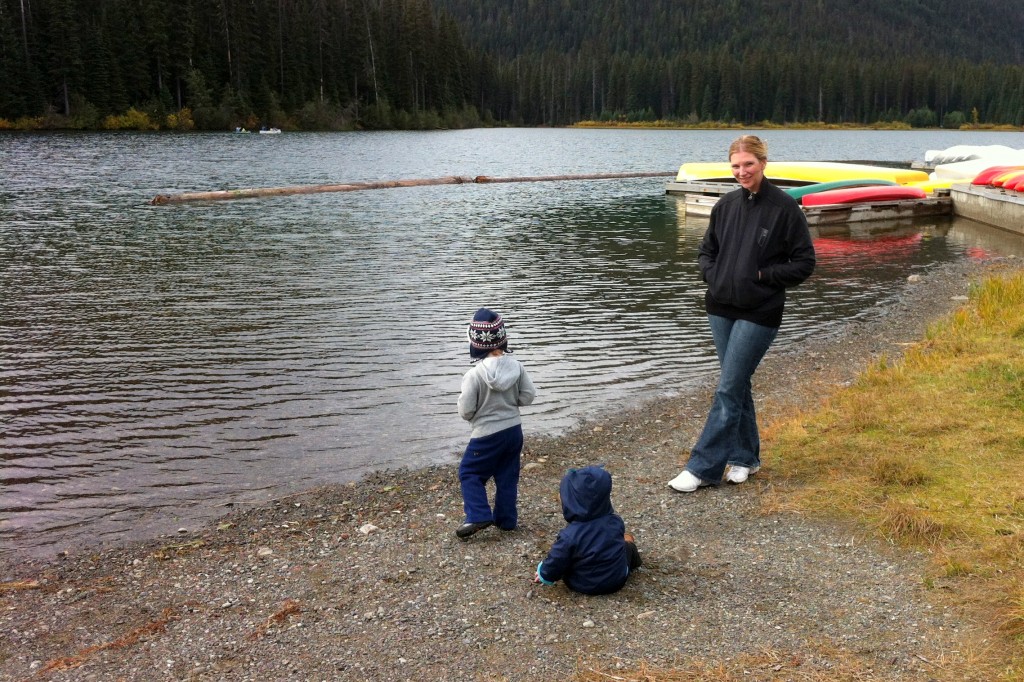 We spent an afternoon at nearby Lightning Lake, a fresh water lake that’s popular for non-motorized watersports like canoeing, kayaking, paddle boarding and fishing.

You can rent canoes and kayaks directly at the lake, but it was far too cold to get on the water that day. It was actually the last weekend of rentals before the shop closes for the winter season. One night, I took Braydon outside for a “night walk” in the forest. We didn’t go very deep into the forest but far enough that he felt like we were a long way from home. He was so excited to be exploring at night, past his bedtime. It was quite fun to watch him tip toe over fallen leaves and whisper his findings, so as not to disturb the creatures of the night.

Our cabin neighbours set up a crackling camp fire in the front of their cabin, so we left the shadows of the forest and ventured towards the flames. Braydon had never seen a camp fire before, so this was a big deal. He was quite scared of the fire at first. He knows fire is dangerous and can burn you, so he didn’t understand why people were sitting on logs beside it.

His fears quickly disappeared when he saw a young girl throw a handful of fallen pine cones into the flames. When the pine cones catch fire they turn bright red and spit out sparks. The imaginative little girl informed Braydon that these were “fire angels”, which, of course, inspired Braydon to scour the forest for more pine cones. We must have burned 50 pine cones that evening. We caught this fiery sunrise on our last morning. It didn’t last long, but it sure was pretty. 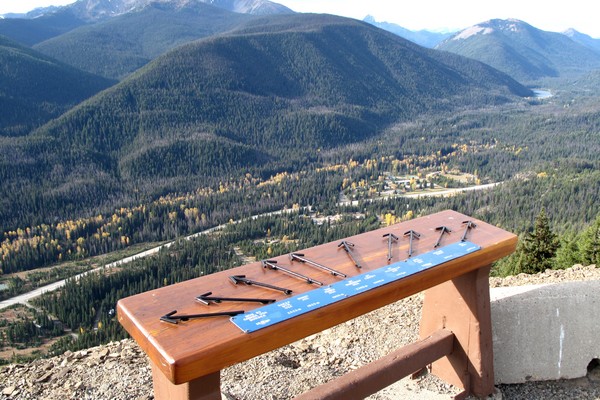 Across the highway, on the opposite side of the resort, you can catch some outstanding views of the North Cascades mountain range from the Cascades Lookout. The windy road to the lookout has several sharp switchbacks but it’s paved and in surprisingly great condition. 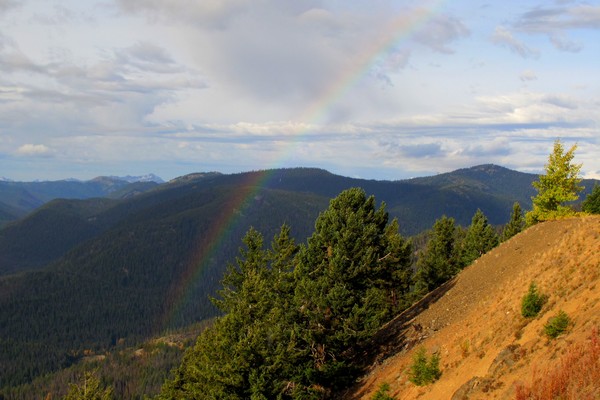 Rainbow over the valley. Views from the Cascades lookout. 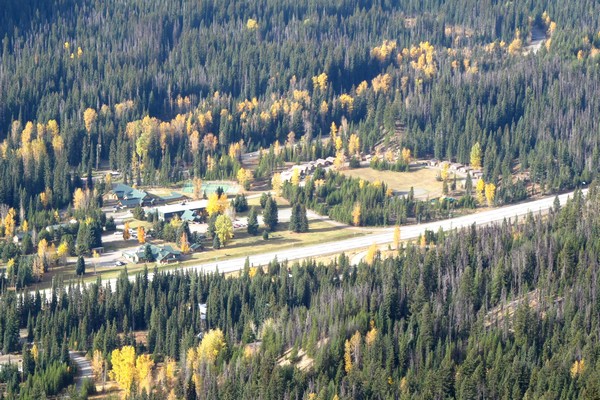 This photo illustrates the layout of Manning Park Resort. That ring of small cabins to the right is where we stayed. All of the cabins face that open field. The hotel, indoor pool and facilities are located in the cluster of large buildings to the left. The restaurant, pub and market are found in that building near the edge of the highway.

This short road trip to central British Columbia was a great reminder of how important it is to travel with our little boys, while they are still little boys. Being on the road, away from our home and daily routines, brings us together in a very different and special way. It forces us to slow and embrace each moment.

If it’s been a while since your last trip, what are waiting for? Jump in your car and go for a long drive, you’ll be glad you did.

Have you visited Manning Park? What did you think?
Share your experiences in the comments section below, we’d love to read about it!