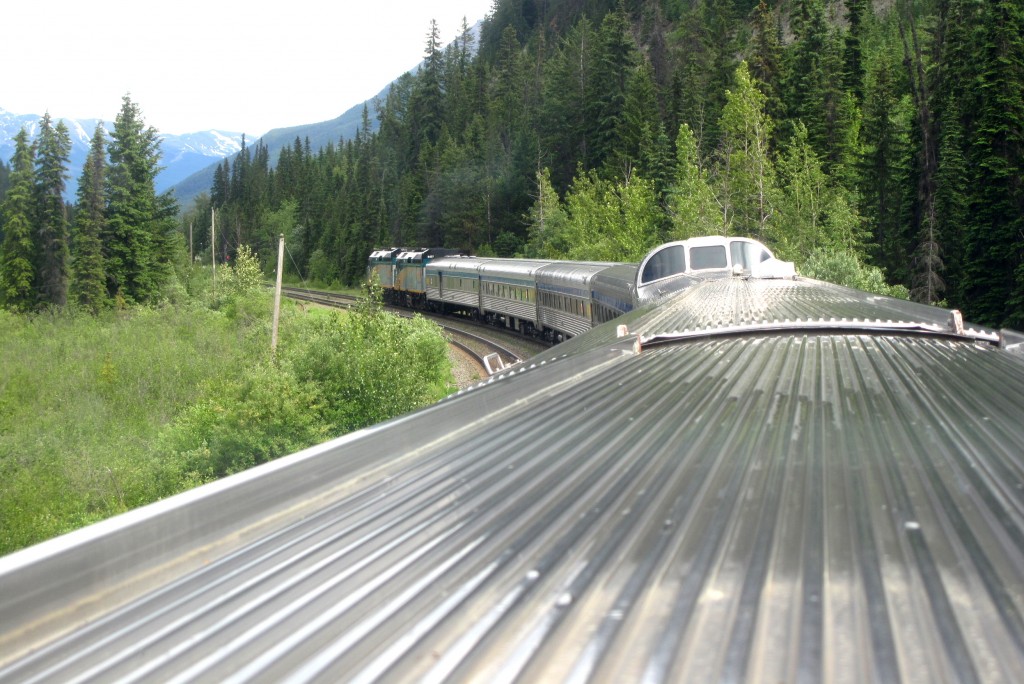 We originally published this post back in the summer of 2014, when our boys were still quite young. We’re re-publishing this post today because this is the time of year when many first time visitors to Canada are exploring the Via Rail from Vancouver to Jasper. Riding the overnight train is a memorable way to experience the majestic Canadian Rockies.

Overnight Train from Vancouver to Jasper with VIA Rail

Taking an overnight train in Canada ranked high on our travel wish list, but, for some unknown reason, it hadn’t become a reality until our recent experience riding the overnight train from Vancouver to Jasper, Alberta.

I often wonder how people from around the world view Canada as a travel destination. I think I have a general understanding, however I enjoy learning about our home country through the eyes of first time visitors.

“This is so exciting”, said Walter, a retired banker from Liverpool, England.

“We’ve been planning this trip across Western Canada for over three years”, he told me.

Walter and his wife Sharon were enjoying a complimentary glass of sparkling wine in the observation car as the train slowly pushed out of the Vancouver train station.

This train experience was the centerpiece of their first trip to Canada. 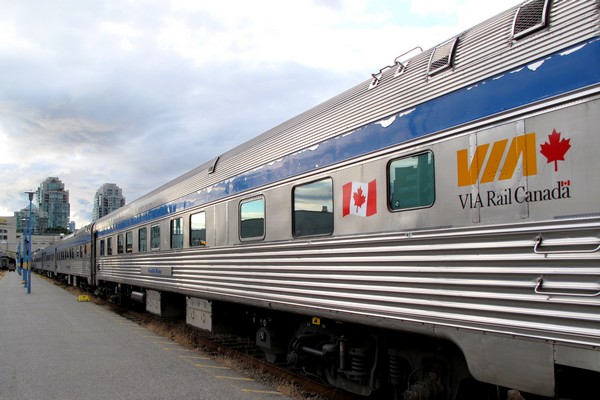 Surprisingly, we were the only Canadians in our train car.

Most of the guests on this train were from western Europe or the southern United States. The majority were taking the overnight train from Vancouver to Jasper and a few were taking the train across Canada to either Toronto or Montreal.

I was reminded of our trip to Europe a few summers ago, when we traveled through Germany, France and Switzerland by train. I remember how exciting it was to be overseas experiencing Europe by train.

I imagine our travel companions felt the same way about this train experience through western Canada.

The simplicity of the boarding process. The lack of invasive security checks. The ability to get up and walk around as we please. We find train travel to be the most enjoyable way to travel with our little ones.

As the train began to pick up speed, our host gave a briefing to the guests in the observation car. He asked the group where they were coming from and where they were going. 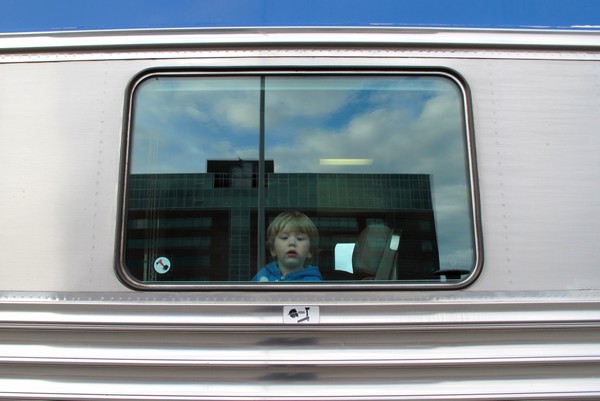 To say that Braydon was VERY excited to ride the train would be a huge understatement.

What is it about little boys and big trains?

He’s been a fan of the kids show Thomas the Tank Engine for as long as we can remember, which has undoubtedly contributed to his love of all things train.

His excitement and curiosity kicked into overdrive as soon as we boarded the train and found our room. He climbed from one chair to the other and ran up and down the hallway yelling “Weeeeeeee”.

And this was before the train departed! 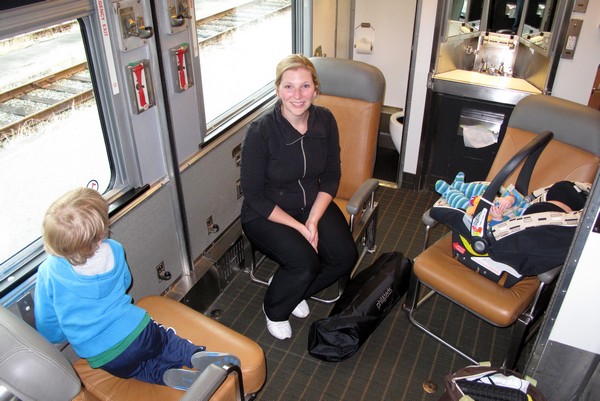 The private sleeper room on the train

Because we’re a family of four, our VIA Rail hosts converted two adjoining rooms into one larger room by removing a retractable wall.

It’s quite amazing how functional these small rooms are. The designers have certainly found creative ways to maximize every inch of space.

Here’s more info on the VIA Rail Sleeper Room. 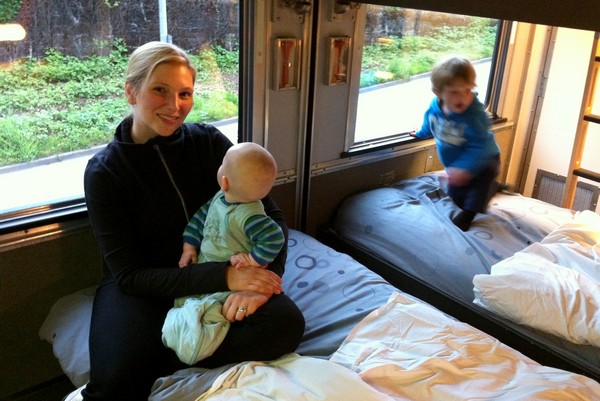 Sleeping on the train with young kids

The sleeper room set-up is similar to bunk beds, with one bed on the bottom and one on top. However, because we had the retractable wall removed to make one large room, we actually had two bottom beds positioned side by side (see above photo).

There was a 6-inch gap between the two bottom beds that ate Braydon’s little legs a few times before we wised up and plugged the hole with a few pillows.

The bed do not have safety guards to protect Braydon from rolling off the bed (which was a surprise) but we managed to keep him safe by tucking pillows under the sheets, creating a barrier between him and the floor.

Fortunately, it was a smooth ride with no sudden stops.

We brought our portable traveller crib for Connor (this is the model we use). Connor is too small to sleep in his own bed, especially without bed guards, so we set him up on the floor in his portable crib, next to Nicole’s bed.

Cameron slept on the top bunk, above Braydon. 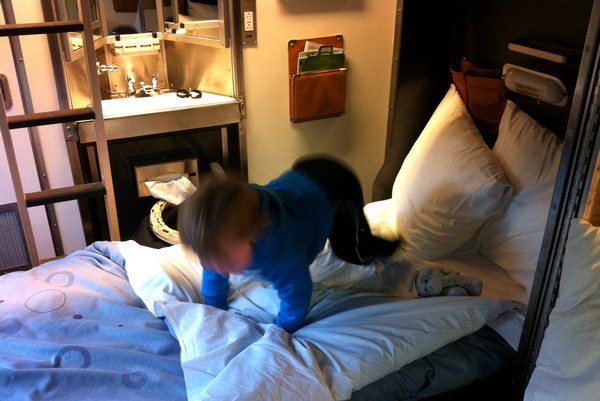 Of course, Braydon had to test out his new bed by jumping on it. And yes, this did result in multiple head bonks on the bed above. You’d think he would have learned after the first time. Boys will be boys! 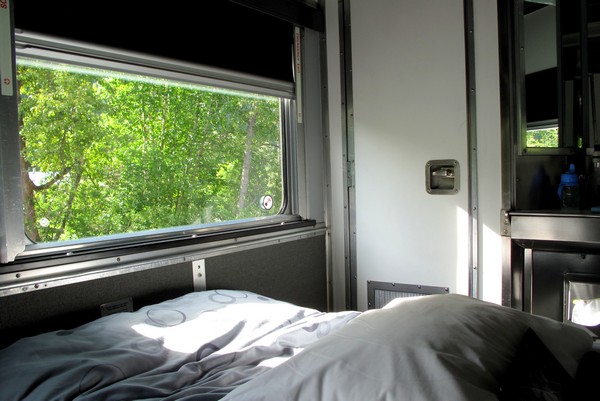 Morning on the VIA Rail

The sun rises early in Canada during the summer, so we opened the blinds around 6:30 and watched the forests and mountains pass by while laying in bed.

It was a really fun and unique way to start the day.

We didn’t have the best sleep because both boys woke up periodically throughout the night, but we did get about 6 hours of sleep, which is a lot more than we thought we’d get with all of us packed into one room. 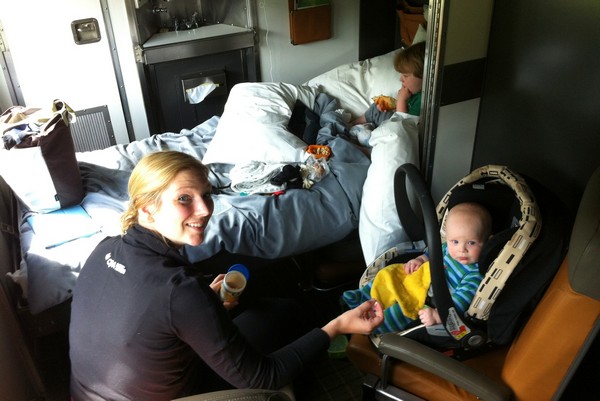 Changing the Room Layout on the Overnight Train

After everyone was fully awake and ready to visit the dining car for breakfast, the train attendant removed one of the bottom beds for more space.

It’s nice to have the flexibility to change the room layout on the journey.

This gave us room to roam while still keeping a bed for Braydon to nap later that morning. 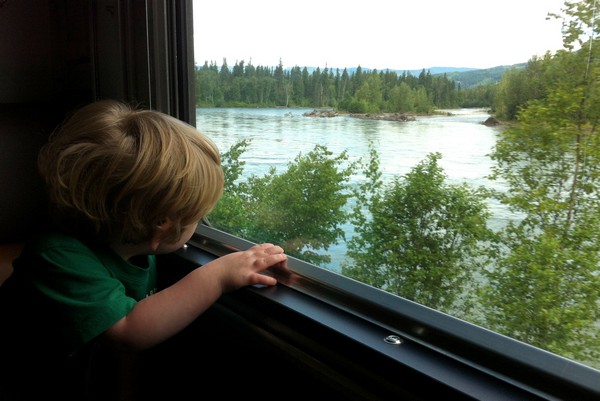 Rocky Mountain views from the window

That said, I found myself more interested in watching the curiosity and imagination of Braydon as we passed through the changing landscapes.

Oh, to see the world through a toddler’s eyes! 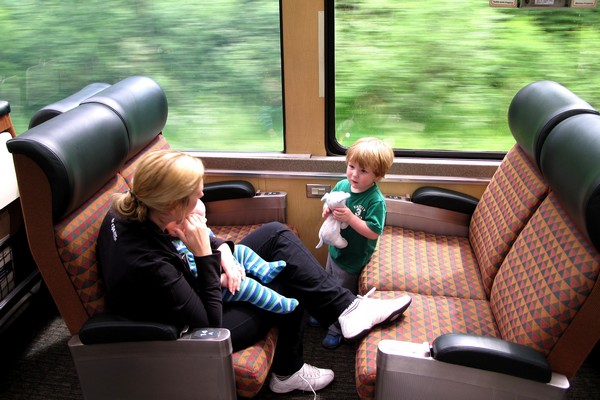 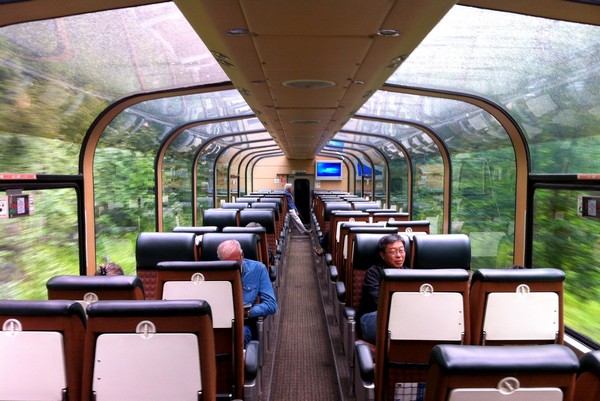 The best way to view the Canadian Rockies is to sit in the domed observation car. 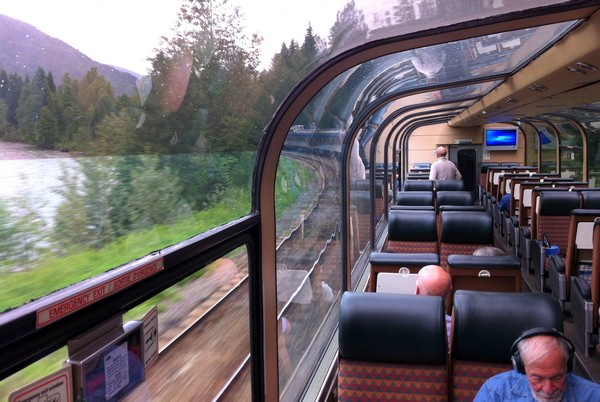 Dining on the VIA Rail from Vancouver to Jasper

Watching nature slowly pass by your window is a fantastic way to enjoy a meal. I was impressed by how quickly the kitchen sent out the food, considering it’s prepared in such a small space while the train sways back and forth.

You must have serious balance strength to work in train kitchen.

Breakfast is served on a first come, first serve basis. The menu is limited but it offers the traditional options you’d expect, such as eggs, bacon, toast, pancakes and fresh fruit.

Lunch is served by group seating. Those who ate breakfast early received the first lunch seating, followed by the second and third seating. There are only so many seats in each dining car so this prevents a mass gathering of hungry guests wanting to eat at the same time.

Like breakfast, the lunch menu is limited, ranging from pasta to sandwiches to salads. 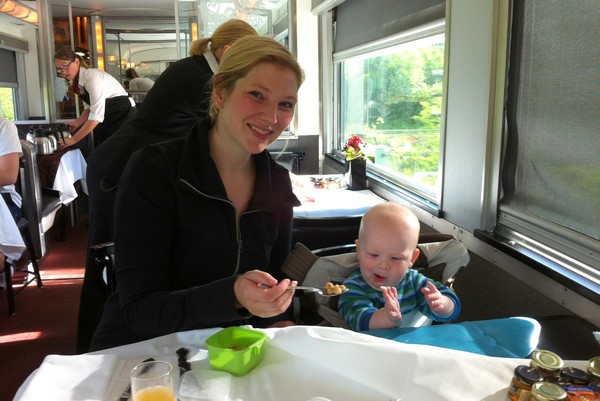 Dining with kids on the Via Rail train

There are no children’s high chairs in the dining car, so keep that in mind if you’re traveling with little ones. Fortunately, we brought our baby carrier that has the ability to convert into a portable chair (this is the baby carrier model we use).

During lunch, the train conductor announced that a black bear was spotted on the right side of the train. Everyone in the dining car stood up and looked out the window. Within 5 seconds we spotted the big black bear about 10 meters from the train tracks.

What a stoke of good luck! 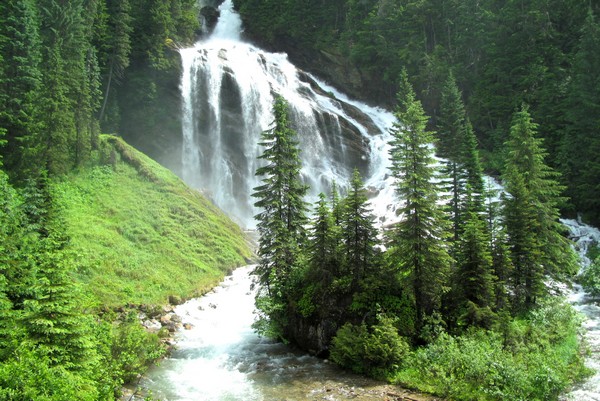 The railroad engineer slowed the train to a snail pace as it passed this beautiful waterfall, allowing snap happy tourists enough time to capture a few images like the one above. It was a nice touch. 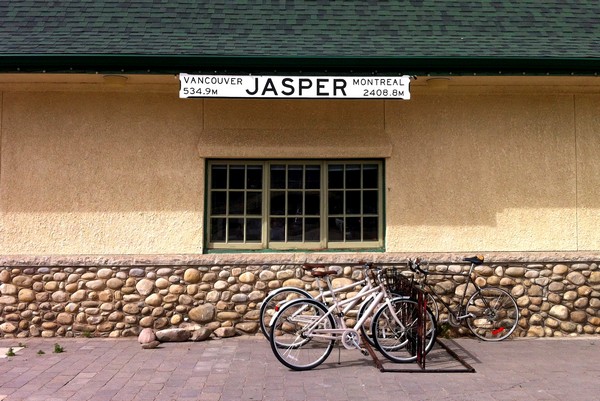 Arriving at the Jasper train station in Alberta

About 2 hours after lunch we approached our final destination, the Jasper Train Station. We arrived in Jasper at around 4:00 PM mountain time, about 18 hours after we departed Vancouver.

Although 18 hours of travel sounds like a long time, it actually went by quickly. Having a luxurious private room with beds certainly made this train experience a memorable one.

We spent one night in Jasper before starting our Alberta road trip south to Banff National Park via the stunning Icefields Parkway. 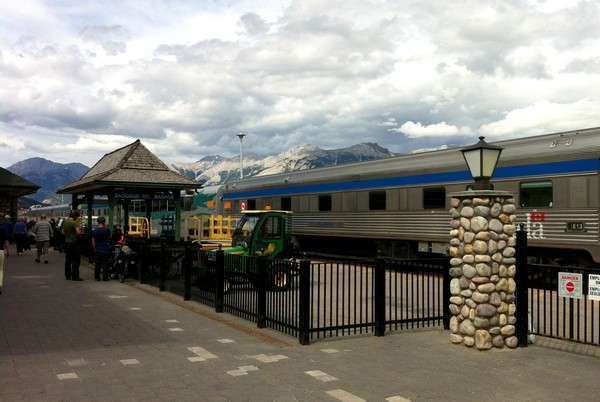 A few things to know before you go:

Have you taken the overnight train to the Canadian Rockies?

Share your experience in the comments below. Our readers thank you!

Read next – Things to do at Harrison Hot Springs with kids