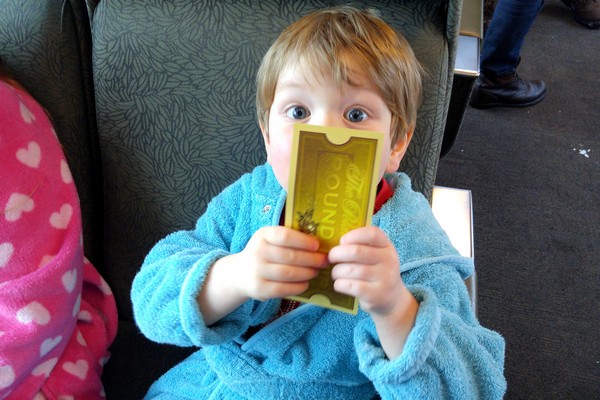 This post was originally written in December 2016. Given that the Holiday Season is upon us, we thought we should re-publish this story about our trip to the North Pole on the Polar Express in Squamish.

The Polar Express in Squamish, BC

If you’ve watched the classic animated Christmas movie staring Tom Hanks, you’ll appreciate the festive experience we had a few weeks ago. We took a ride on the Polar Express to the North Pole!

Okay, so it wasn’t technically the North Pole, but we did get to meet Mr. and Mrs. Clause and there was lots of snow everywhere. Close enough, right?

This Polar Express experience typically sells out each year, especially on the weekends in middle December. If want to get a good time slot (ie. Saturday night) you’re best to book early. 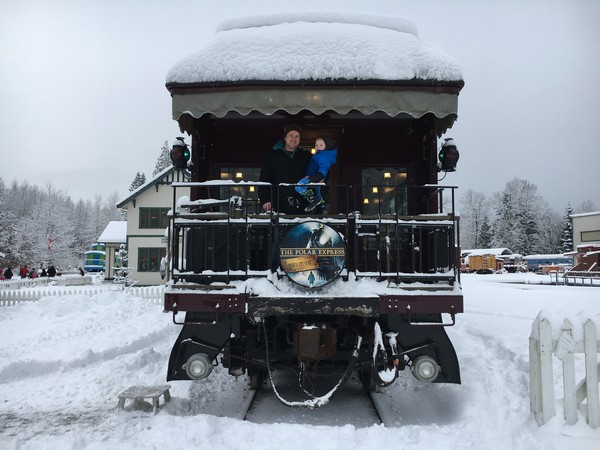 We often talk about the importance of taking small trips. Even the ones close to home. We travel to experience something new and create lasting memories, so it’s less about where you go and more about what you do.

This day trip to Squamish was a solid reminder that we don’t have to board an airplane to have a memorable family experience. Sometimes, you just need an excuse to jump in the car and take a day trip to a place you haven’t visited in a while.

For those of you who have no clue where Squamish is located, it’s about an hour drive from Vancouver. It’s the half way point from Vancouver to Whistler, so it’s often the ‘pit stop’ for visitors driving to Whistler. It’s also home to the popular Sea to Sky Gondola, one of British Columbia’s newer tourist attractions (if you have time, try to include a ride on the gondola while you’re in the neighbourhood). 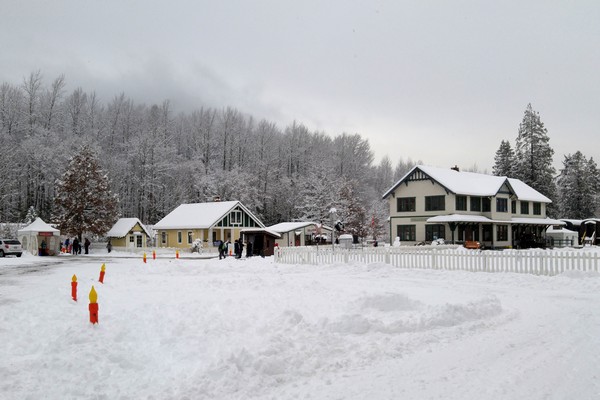 Back to the Polar Express in Squamish…

Over the past few years, the Polar Express has become the Christmas movie of choice in our family (the original Grinch cartoon is a close second). It was an exciting moment when we informed our boys that WE would be taking a ride on THE Polar Express in Squamish.

Braydon was thrilled. Connor was confused, but jumped up and down with joy anyways.

The West Coast Railway Heritage Park has been hosting train themed events at its Squamish facility for years. Thomas the Train is the big draw in the summer, with the Polar Express becoming the big ticket item during the Holiday Season. 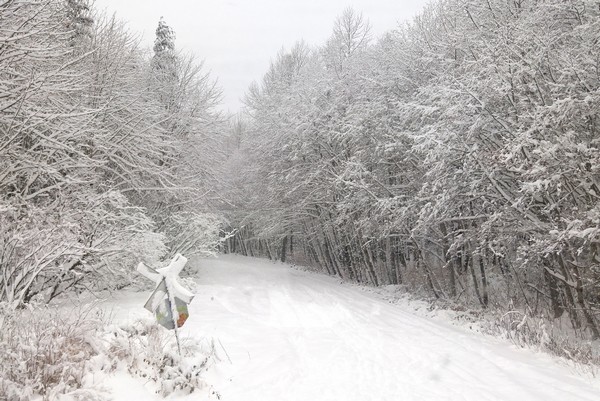 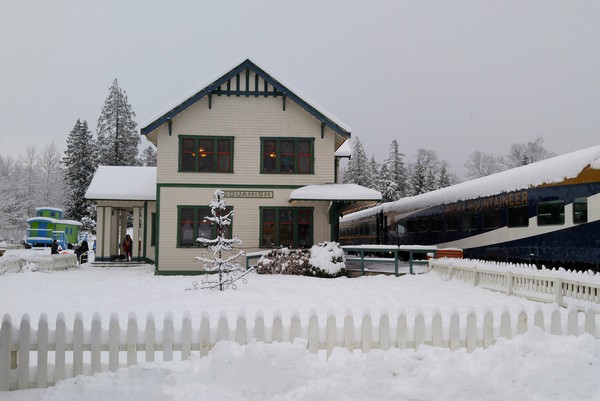 We lucked out with the weather that day!

Although, I suppose that’s a matter of perspective. It snowed heavily the night before and it continued throughout the morning, creating the perfect winter setting for a ride on the Polar Express in Squamish.

The downside was that the Sea-to-Sky highway was quite treacherous and there were numerous cars in the ditch. Fortunately, we gave ourselves an extra hour before the departure time. We needed it.

It was a slow drive that morning.

Once we entered the park, we picked up our Golden Tickets at the makeshift check-in booth. We then made our way to the train station and waited for instructions.

It was a sold out event, which meant lots of families crammed into a tiny train station. 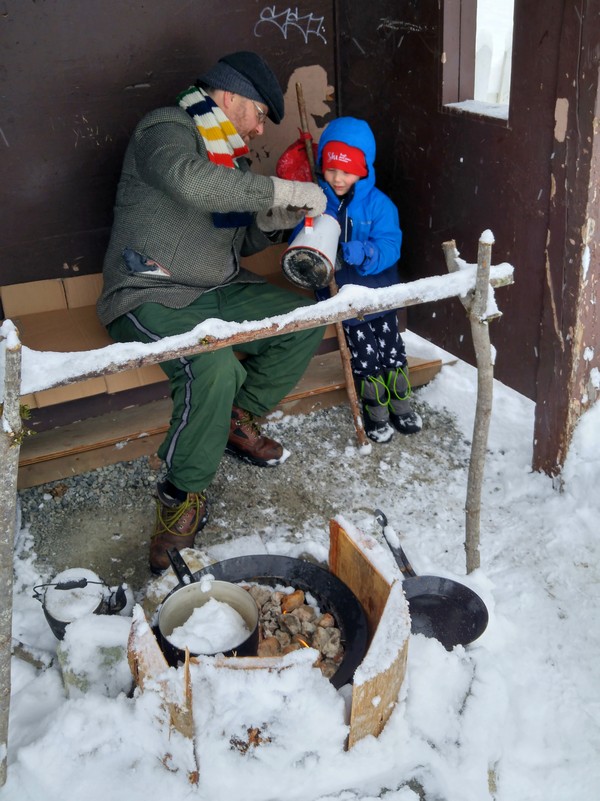 As we walked towards the old heritage train station, we noticed someone sitting in front of a fire. It was the Hobo from the movie! Braydon noticed him immediately. It took a little coaxing, but eventually Braydon made his way towards the hobo to try a “cup of Joe”.

True to character, the Hobo pulled out a dirty sock from the brewing pot of coffee.

He then pretended to spit out the coffee, just like the boy in the movie.

It was quite funny to watch him re-enact the scenes from the movie (we’ve watched the movie at least 15 times over the past month alone).

All of the children, and some parents, wore pajamas on the train. Braydon made sure to wear his blue housecoat, just like the boy in the movie. 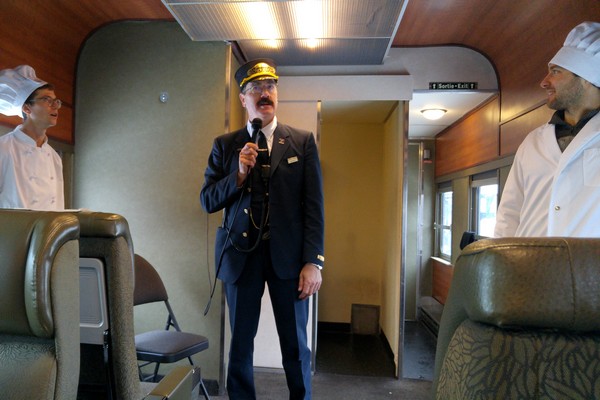 After the passengers boarded the train, the conductor gave a few instructions and the train began to leave the station. The man playing the conductor, pictured above, looks very similar to Tom Hanks’ character in the movie.

The kids giggled and pointed as he walked up and down the aisle. 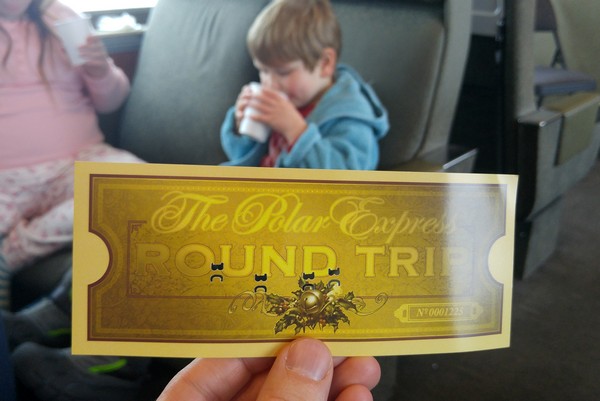 The conductor took the golden ticket from each passenger and punched multiple holes in the ticket, just like in the movie. The punch had two letters ‘BC’. I’m assuming it stands for British Columbia.

But, on this day, it stood for “Believe in Christmas”. 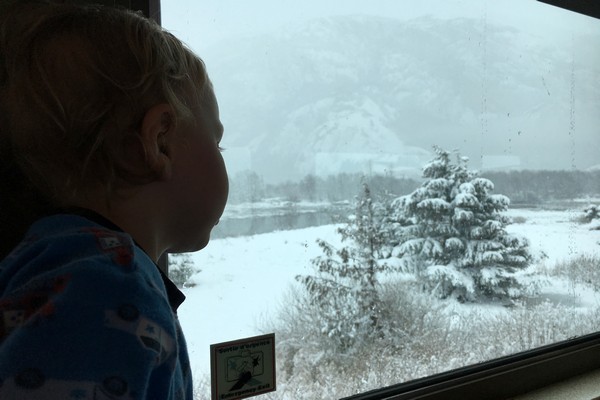 The winter scenery outside the window was perfect. 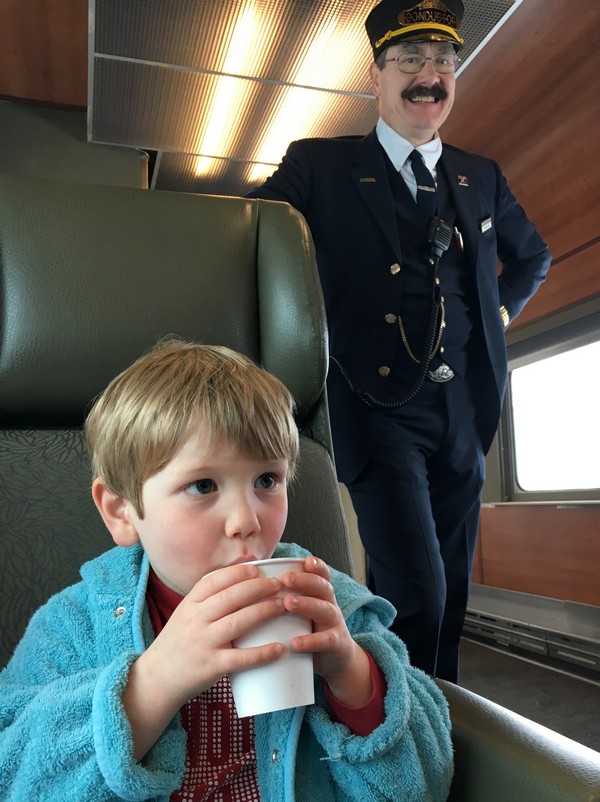 Braydon was most excited for the hot chocolate

In the movie, the hot chocolate scene is quite the production. Our hot chocolate experience was a little disappointing. Instead of singing and dancing, two servers rolled a cart down the aisle with pre-poured cups of hot chocolate. It felt kinda like getting soft drinks from a flight attendant.

The end result was the same – happy boy drinks sweet hot chocolate – but it would have been nice to have more thought put into the delivery of the drinks. 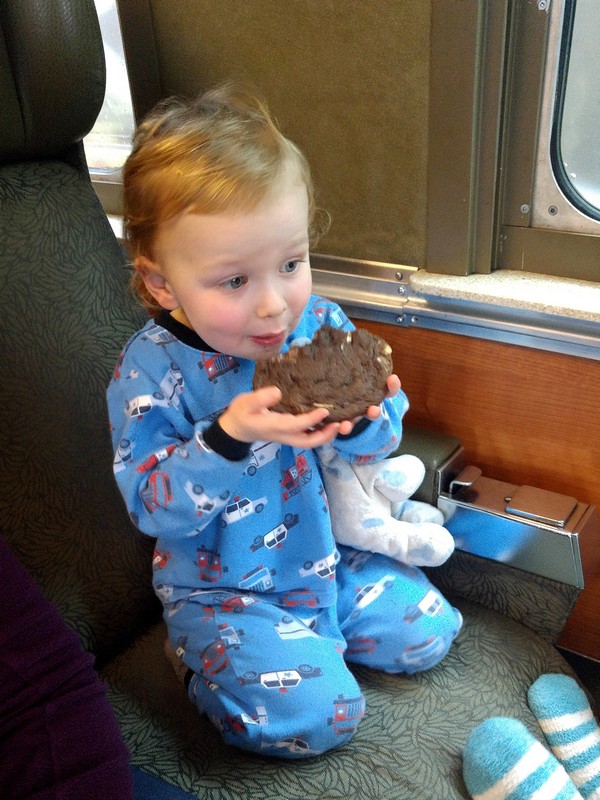 Connor enjoyed eating a chocolate cookie that was bigger than his head. 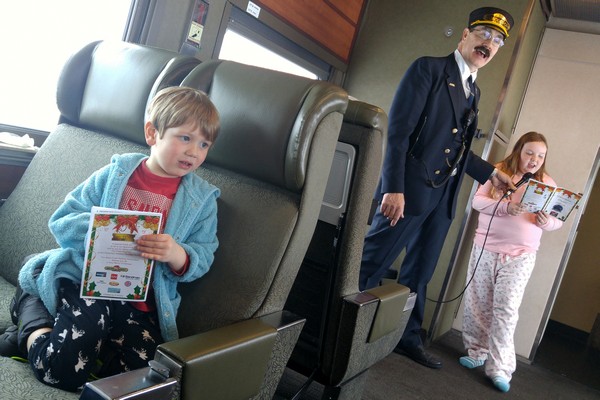 After the cookies and hot chocolate were devoured, we sang Christmas carols and watched the wintery landscapes pass us by. We didn’t travel very far.

The entire trip is typically about an hour. Our trip was a little longer because we experienced some delays due to the heavy snowfall. 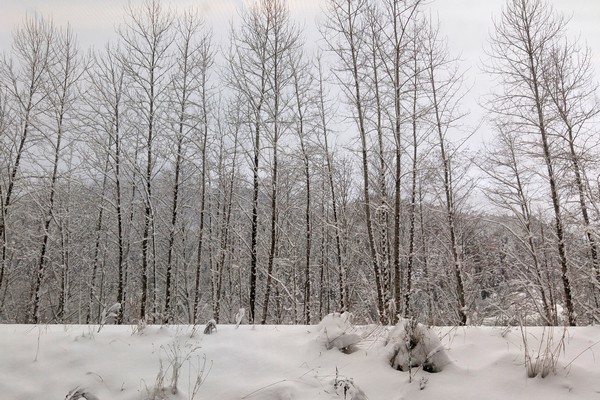 Related: The Peak of Christmas at Grouse Mountain 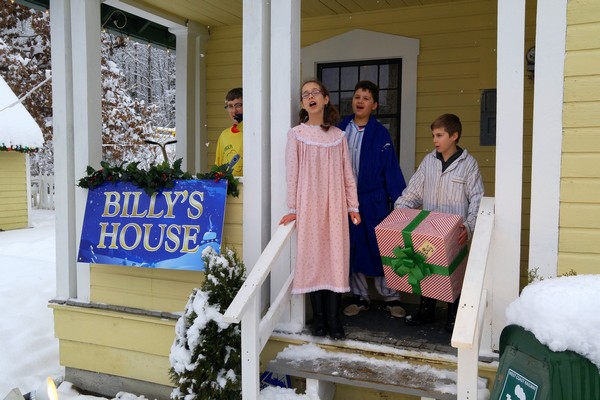 To the North Pole…

We arrived back at the train station and disembarked the train. As we walked through the park towards the North Pole, we passed the characters from the movie. They were singing and waving from the front porch of Billy’s House.

The North Pole was really the CN Roundhouse museum decorated for the season. There are several activities for the kids, including gingerbread decorating, arts and crafts, games, mini-train, and, of course, Mr. and Mrs. Clause.

We spent about an hour at the North Pole exhibit. 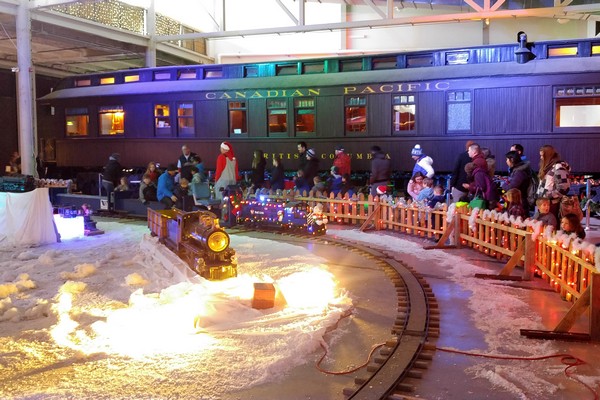 This is the mini-train inside the Roundhouse (aka The North Pole). 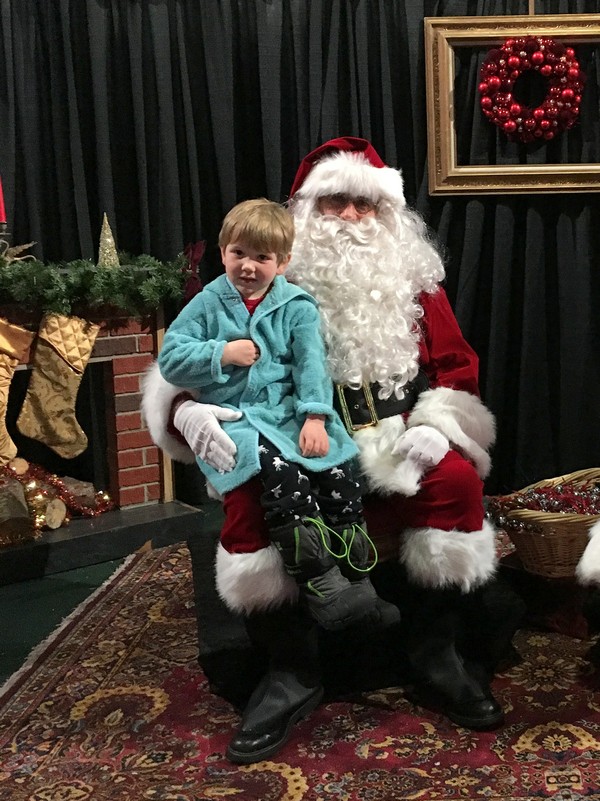 Braydon had the opportunity to sit on Santa’s lap and tell him what he wanted for Christmas. Connor, on the hand, ran as fast as he could AWAY from Santa. For some reason, he’s absolutely terrified of Santa. It’s actually quite funny to watch his reactions every time he sees a human Santa.

After speaking with Santa, each boy received a silver jingle bell, just like the one from the movie. It was a nice touch that landed well. Both boys hung on to that little jingle bell for weeks!

I’m often wondering how these experiences will be remembered by them in future years. 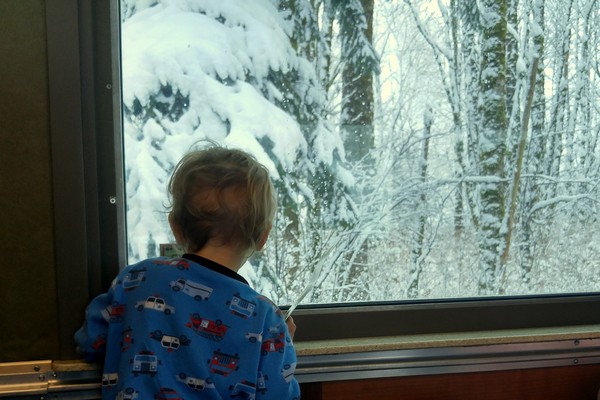 Should you take the Polar Express in Squamish during the day or night?

There are arguments for both options. We did the 10:00 AM departure. The daylight allowed us to look out the window and see our surroundings. We passed through trees and lakes and pretended we were in the Arctic.

The night option is true to the movie, but it’s difficult to see anything outside the window because it’s dark and there’s a reflection from the inside light (we were given this info by someone who has done both).

Have you visited the Polar Express in Squamish?