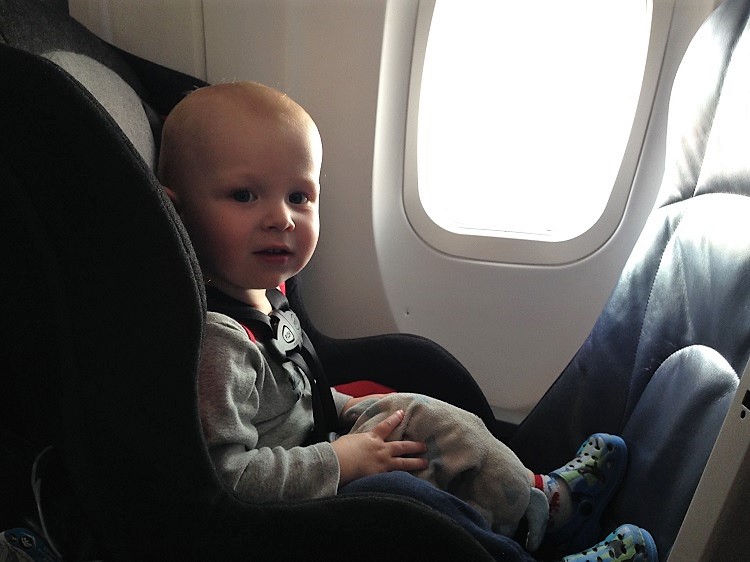 Should you bring a baby car seat on the airplane?

We’ve taken many flights with our boys over the past three years. With each flight we learn something new about baby/toddler travel. On our trip to New Brunswick last month we decided to bring our baby car seat on the plane. It was a gamble. What if he doesn’t want to sit in the car seat, then what?

Why, after over 25 flights with our little ones, did we decide to experiment with bringing a baby car seat on the plane? Well, I suppose the simple answer is because Connor (our youngest, at 19 months) was quite the handful on our last two flights.

Fortunately, those flights were from Vancouver to Calgary and Edmonton. Both flights only an hour in length, which is manageable even in the worst of situations.

Given our experience on recent flights, we had to try something new.

We had a 5 hour flight to Toronto, followed by a 2 hour flight to Saint John, New Brunswick with a layover in between. Not an ideal flight path for a squirmy toddler. 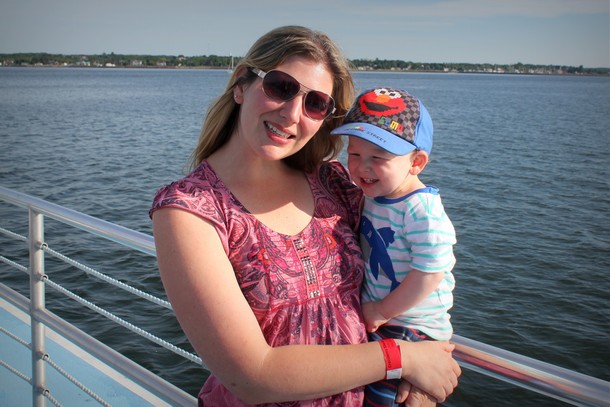 Up until this trip to New Brunswick, we have not purchased a seat for Connor.

Statistics prove that the safest place for a baby on an airplane is in a secure car seat. We understand the risks but chose to hold him on our lap instead. We did this to save the cost of a 4th seat. It’s not the most convenient way to fly, but saving $500-$1,000 per trip is a big deal.

We purchase 3 seats together, which usually gives us the entire row. In the past, this was enough room. Braydon and Connor would take turns with the 3rd seat, but it was mostly occupied by big brother Braydon.

This system worked fine… until he learned to walk.

In our experience, the most difficult age to fly has been between the ages of 12 and 24 months old. At this age, we found them both to be difficult to reason with. It’s an age where negotiating with snacks and toys has little impact.

It’s also the age when they both started to walk, making it extra hard to keep them in their seats. They did not understand why they could not run around and why they were stuck in their seats for hours at a time. Tears and crying happen. 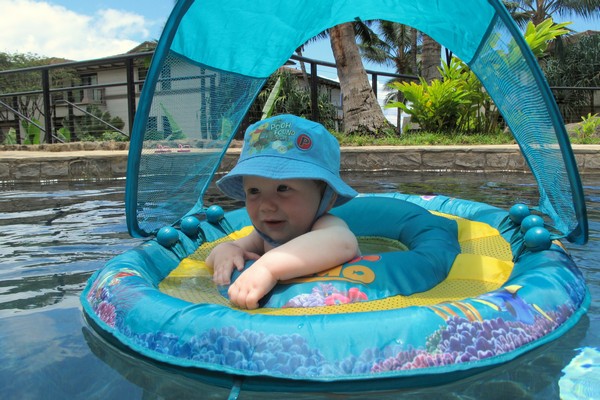 It’s much easier to fly with toddlers who are less than 1 year old.

After two years old, the decision to purchase a seat for your child is removed from your control. At that time, you are required to buy a seat, so there’s no confusion or second guessing.

But, before that 2nd birthday, it’s a tough call for many parents. Especially between 18 to 24 months, which was the age of Connor on this trip (19 months old). And how could we forget, it was the same age as Braydon’s flight from hell. We didn’t want a repeat experience.

Connor likes to move and won’t sit still for longer than 10 minutes.

He’s not interested in TV, so we need to keep him occupied with books, games, toys and snacks. Although he won’t sit still in a chair, he will sit calmly in his car seat. He actually likes going for car rides and is usually happy in his car seat for up to an hour. 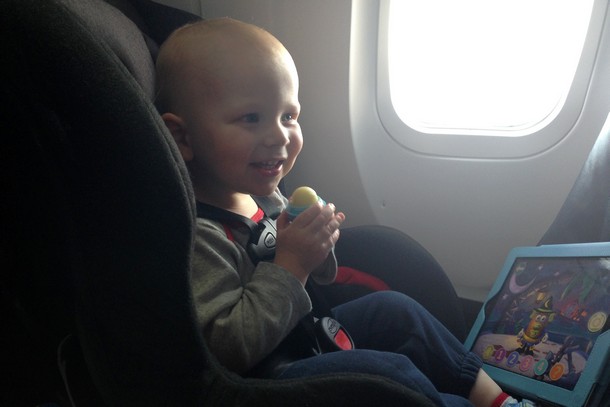 While the cost of the extra seat is not ideal, there are plenty of benefits to purchasing a separate seat for your child, including the option to bring your car seat on board the aircraft. We have a back-up car seat (here’s the model) that’s actually fairly easy to travel with because it weighs less than 10 lbs.

Why not give the car seat a try?

We usually travel with our Foonf car seat and check it with our luggage. It’s a very heavy car seat (close to 50 lbs) so we use a Clek Weelee travel bag to transport it from car to car. The Foonf car seat is an option for the airplane too, but you’ll want something like the Go-Go Babyz wheel cart to help you at the airport.

On the plane, we put the car seat on the window seat. This allows easy access for all passengers in case of an emergency and it gave him the opportunity to look out the window because he’s sitting higher up.

The next question was whether to face him forwards or backwards.

When the car seat was forward facing his little feet were only a few inches from the seat in front of him. Even a slight kick of the leg meant contact.

Of course, he immediately started kicking the seat in front of him. We tried to explain to him that what he was doing was disrupting the passenger in front. But the more we talked about it, the more he thought it was a game. Of course, then he kicked the seat harder and faster. Not cool little man. 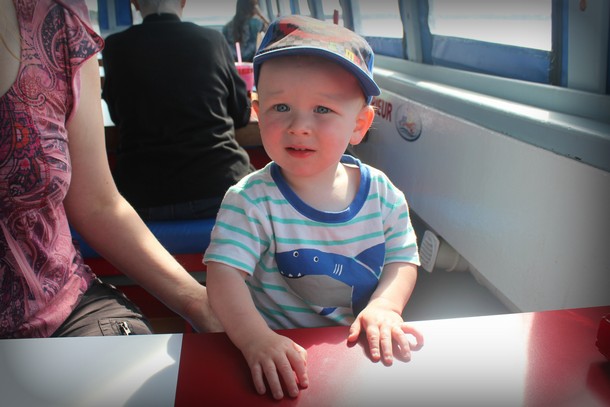 We realize forward facing is not going to be an option.

I turned the car seat around so that he was rear-facing (he’s familiar with this because he’s still rear-facing in our car). The flight attendants were unsure about the car seat position and had to refer to their manuals. It caused quite the fuss for a few moments.

After some discussion, they determined the rear-facing position was fine because Connor’s weight was under the allowable limit (I believe they said 25 lbs was the limit).

Unfortunately, this meant that the passenger in front was unable to recline her chair.

I politely explained the situation to her but she was not pleased and made it known. It’s obviously not an ideal situation, but the limited options are either constant kicking or limited reclining. We made the decision that the no-kicking option was best. You can’t please everyone, I suppose. I’m sure she survived this colossal inconvenience.

We did end up facing him forward shortly afterwards – see photo below. He was fine on the second flight and there were no kicking incidents. Forward facing is the ideal scenario, but it depends on his mood and how cranky he is. 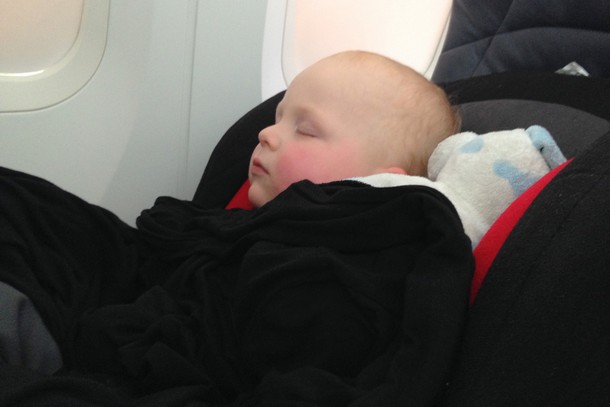 Bringing the baby car seat on the plane was the BEST decision we could have made. Connor was happy, content and comfortable in his car seat. It helped that this car seat was familiar to him. He clearly felt safe and free to sleep at will. He napped on all 4 flights and barely made a peep.

The result of a well rested toddler – no crying with lots of smiles.

We are flying again in a couple months. At that time, Connor will be over 2 years old. Even though we have to purchase him a seat, we would do it anyways (even if he was 23 months old). We will also be bringing our car seat on the plane again.

Hopefully we’ll have another successful flight!

Have you used a baby car seat on an airplane?

How did it go? What did you learn?

Share your experience and feedback in the comments section below. Our readers thank you!

8 Things to do in New Brunswick with kids

Our experience at the Great Wolf Lodge in Niagara Falls, Canada