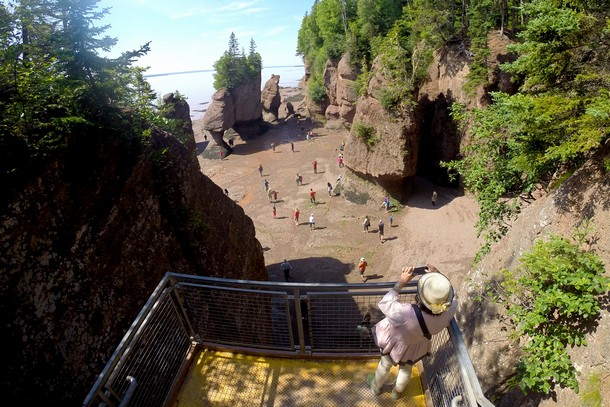 Hopewell Rocks and the Bay of Fundy

If you find yourself traveling to New Brunswick there’s one place you MUST visit – the Hopewell Rocks and the Bay of Fundy. The reason you want to visit the Hopewell Rocks is to witness the world’s highest tides and walk on the exposed ocean floor at low tide.

Every day, twice a day, the tides flow in and out of the Bay of Fundy, sometimes reaching vertical heights of up to 45 feet (14 meters). Think about that for a moment.

That’s the height equivalent of a 4 story building – in water movement!

Each year, more than 180,000 people visit the Bay of Fundy, making the Hopewell Rocks one of New Brunswick’s top tourist attractions. The Bay of Fundy was designated as a UNESCO Biosphere Reserve because of its unique geology, terrestrial and marine ecosystems, and cultural heritage. 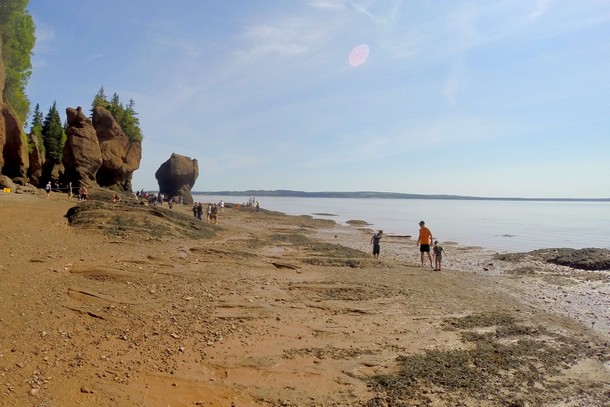 The Hopewell Rocks are located on the shores of the upper reaches of the Bay of Fundy at Hopewell Cape, about 45 km’s south of Moncton and 190 km’s north of Saint John. It’s about a 3.5 hour drive from Halifax in Nova Scotia.

In July 2009, the Bay of Fundy was named as a finalist for the New 7 Wonders of Nature contest that ended in November 2011. While it didn’t make the top 7, it was in the same conversation as the Grand Canyon and Great Barrier Reef, which says a lot about this natural wonder.

Read more – 8 Things to do in New Brunswick with kids

The Hopewell Rocks, also known as the Flowerpot Rocks, are the most notable rock formations in the region. I’ll spare you the geology lesson about how these unique rocks came to be and instead share this link that tells the story far better that I can.

It’s actually quite fascinating, if you’re into that kind of stuff. 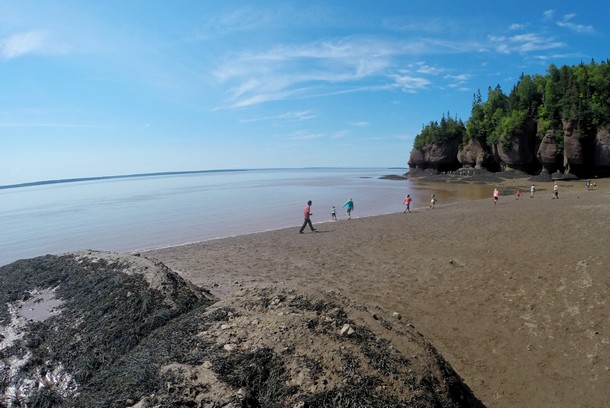 Walking on the Ocean Floor

The main goal for our visit was to walk on the ocean floor, an essential part of the Hopewell Rocks experience. To do this, we timed our visit for low tide, which occurred in the morning.

We arrived at the park entrance by 9:30 AM. If you arrive in the morning you should have plenty of time to walk on the ocean floor, but make sure you check the tide schedules ahead of time. 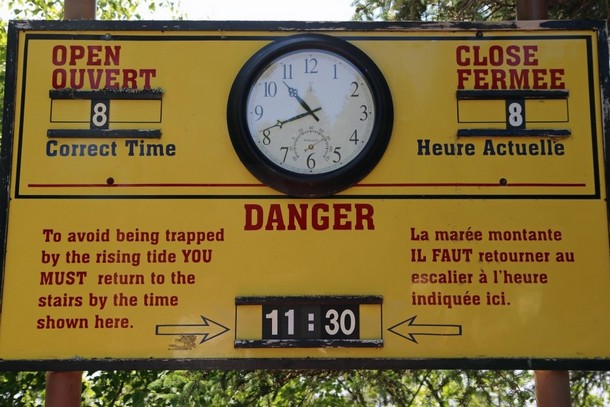 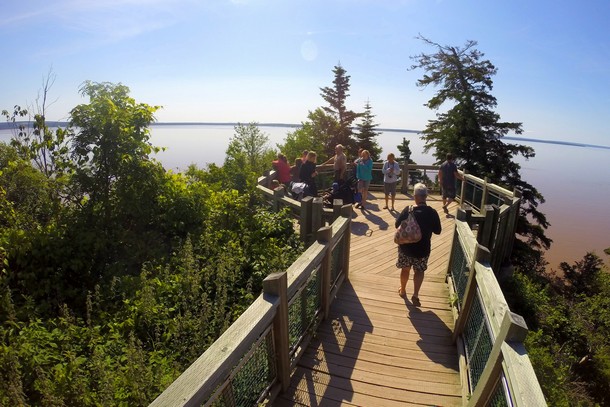 We began our day at the Interpretive Centre, a self-directed multi-media exhibit near the park entrance. We joined our #LetsGoNB team and met up with an interpretive guide who educated us on the Fundy coastal area and it’s interesting tidal activity.

You don’t need to hire a guide but it was nice to have a knowledgeable person explain what we were looking at as we explored the park. 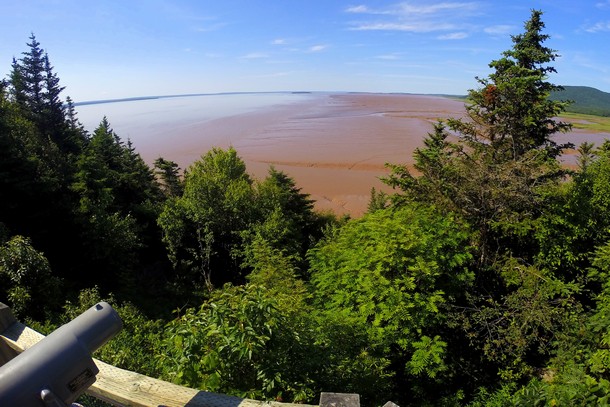 From the Interpretive Centre, we walked to a platform that looks over Daniels Flats (pictured above). It’s crazy to think that in less than an hour, that redish mudflat will be covered by the ocean. 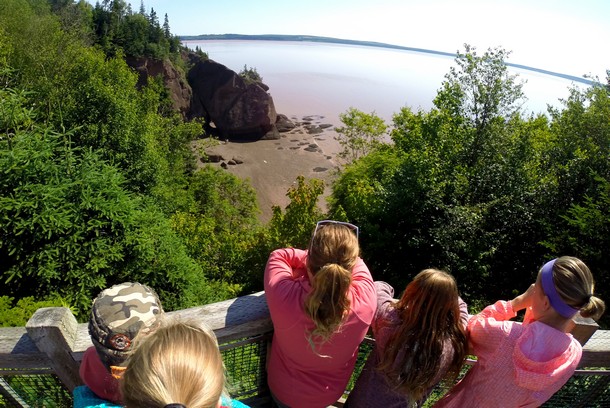 At low tide, you can walk along the beach until you reach Diamond Rock (see above photo). If you look closely, you’ll see a few people at the base of the big rock, near the cave entrance.

To reach that point, it will take about 30 minutes from the main beach access, one way. Depending on when you begin your beach walk, you may need to move quickly so you don’t get caught by the incoming tide. 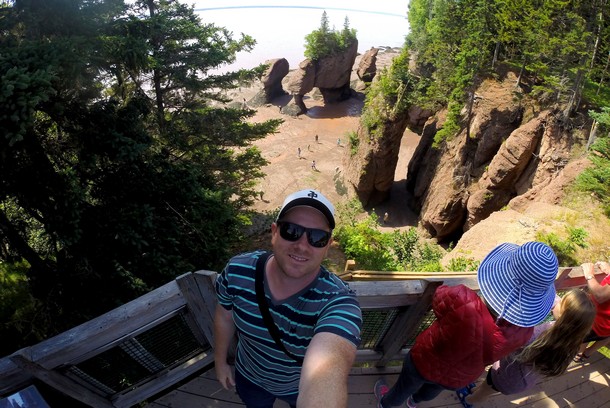 The walk from the Interpretive Centre to the infamous Flowerpot Rocks lookout point (pictured above) takes about 15-20 minutes one way (it’s about 1 km). The trail is downward slopping and covered in gravel. It’s an easy walk but it might be a bit long for a toddler or someone with mobility issues, especially on the way back up. We were glad we brought our baby stroller with us.

There’s a shuttle service that runs between the Interpretive Centre and the main beach access. There’s a small charge for the service.

On the way back, Nicole and the boys jumped on the shuttle, which is basically a large golf cart. However, we were unable to bring our stroller on the shuttle, so Daddy had to walk the stroller uphill for about 1 km. It wasn’t a big deal (he needed the exercise anyways) but it was unexpected – so if you’re bringing your stroller, plan to walk it back up. 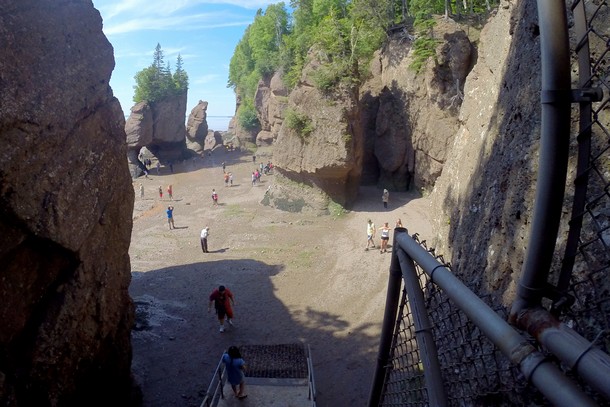 Once you arrive at the Flowerpot Rocks viewpoint, you will then need to walk down a series of stairs before reaching the beach. At high tide, the water will cover everything you see in the above photo. 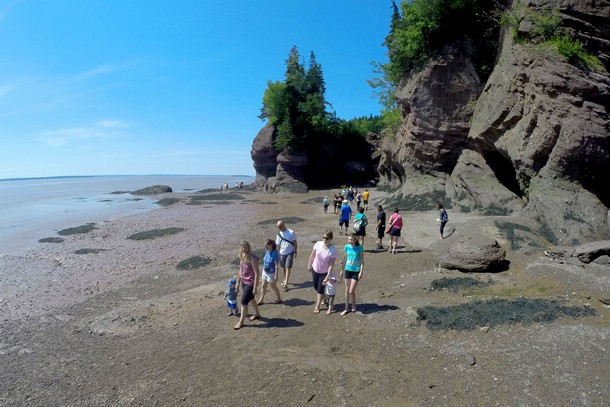 Waling on the exposed ocean floor was an interesting experience. On the surface, it’s not much different than walking on any other rocky beach. However, knowing that in an hour the entire beach will be submerged by water, one can’t helped but be impressed by Mother Nature’s work. 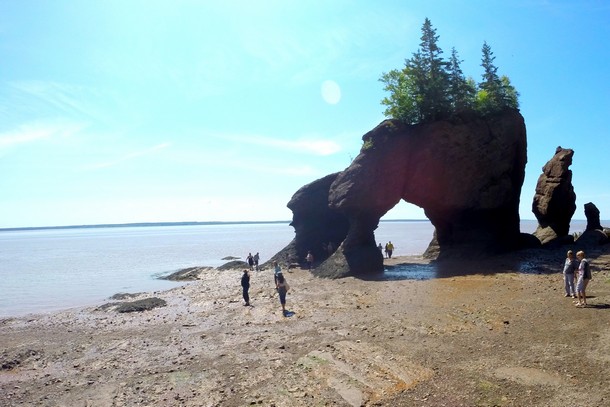 There are lots of unique rock formations along the beach, with the most impressive found near the Flowerpot Rocks section of the beach. If I listened correctly, the above rock formation is called Lover’s Arch. If I’m wrong, leave me a comment with the correct name. 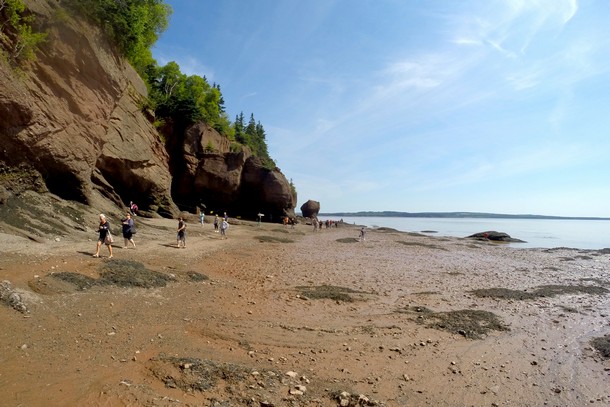 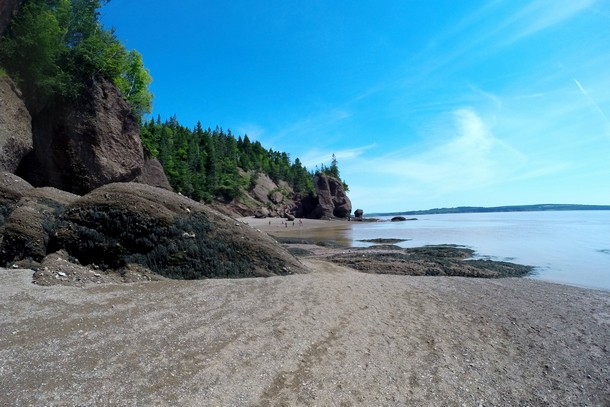 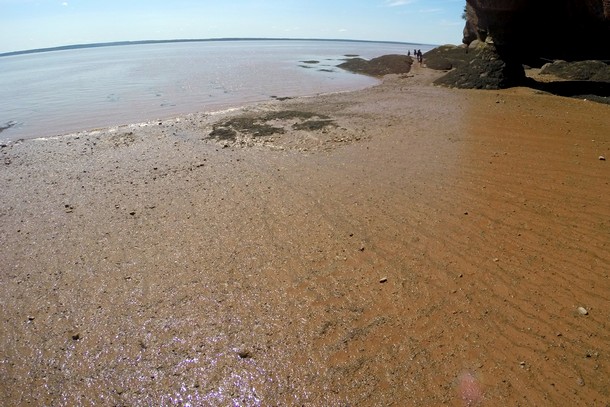 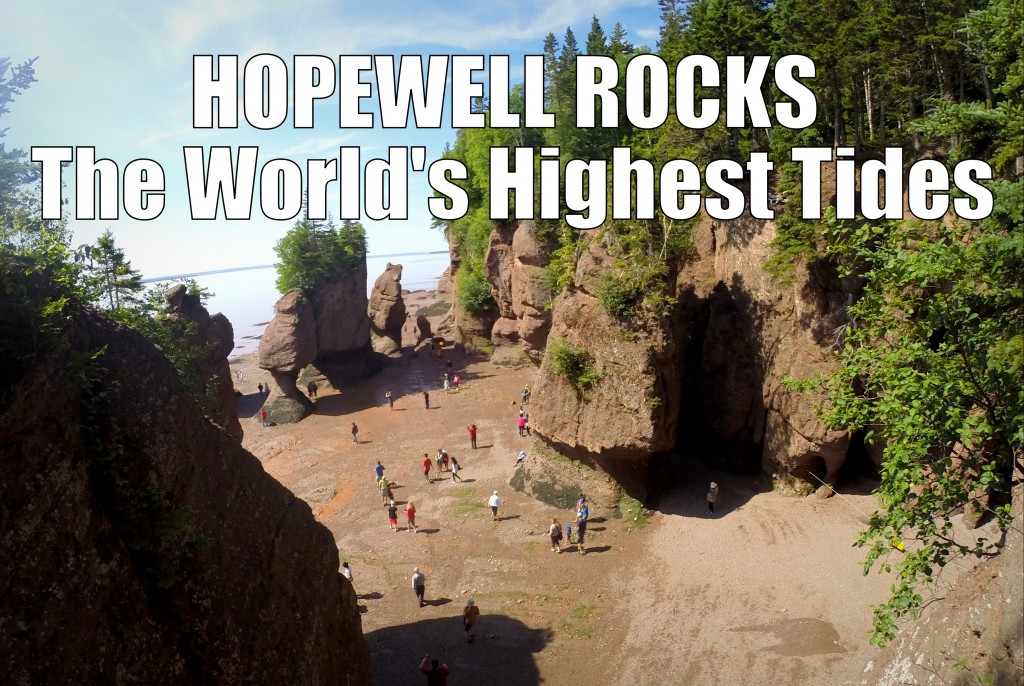 Things to know before you go

Watch the video below to see how fast the tides move!

Read more from our trip to New Brunswick: