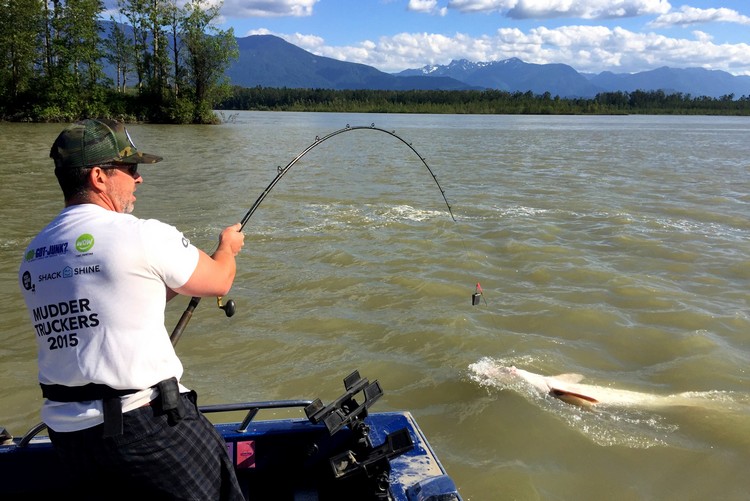 Sturgeon Fishing on the Fraser River

Let me begin by stating that I’m not much of a fisherman. I’ve only been fishing a handful of times throughout my life. In most cases, I’ve come up empty handed. I’ve been on two deep sea fishing excursions that promised huge catches, but both we were highly unsuccessful. Nothing. Not even a nibble.

So, when I joined a pair of friends on a guided sturgeon fishing trip a few weeks ago, I lowered my expectations. Prior to our trip, I knew very little about sturgeon fishing. I had seen a few photos of these giant sea creatures online. Most of these photos show a group of 4-5 people standing in the river holding the massive fish above water (like this one).

I thought to myself, “these fish are like underwater dinosaurs!”

If a catfish, crocodile and reef shark mated, the outcome would look something like a white sturgeon. They are not cute and cuddly.

Below is a video from our sturgeon fishing trip.

Moments after we get settled on the small fishing boat our guide, Rod, points the boat upriver. The water levels are quite high, unusual for this time of year. Rod kicks the engine into high gear and we power against the strong current.

Rod has been fishing the Fraser River for many years. He knows where the good spots are.

The boat speeds along the river’s edge. The legendary Fraser is lined with lush trees and the occasional vacation home. We’re surrounded by mountains. Some are still capped with snow, which is not common in June, but solves the mystery of the high water level.

The boat skips over white water and splashes a mist on our faces. It’s good to be on the water.

We anchor the boat at Rod’s first location. He opens a blue cooler that is sitting at the back of the boat. Inside are about 15 small fish. Today’s bait. We set up four fishing lines, two are baited with salmon fillet and the other two have the whole fish hooked. 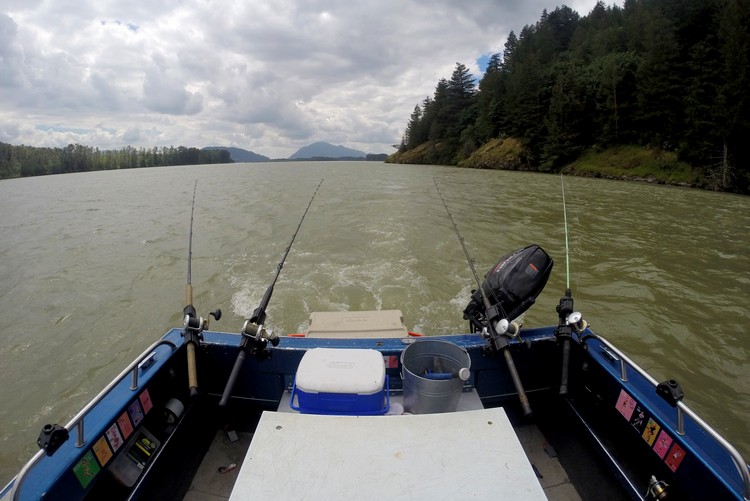 I gaze down river and witness a sturgeon breach about 50 meters from the boat. I had no idea these big fish could jump out of the water!

“How many sturgeon are in the river?” I ask Rod.

Thousands!? For some reason I thought sturgeons were an elusive creature. I thought maybe one hundred lived in the river. At most. Boy, was I wrong!

Rod continued to tell us stories about these ancient fish. A few years ago he witnessed over a thousand sturgeon swimming in the same section of the river. He said the fish were piled on top of one another. Sturgeons do not swim in schools, like many other fish, so this was a highly unique sighting.

Just then, the left line starts to bend. We have a bite!

Rod jumps into action and grabs the line. The fish is not happy about its misfortune. He shakes left, then right. Rod scrambles to pull in the other three lines. Crossing the rods would not be good, for anyone. 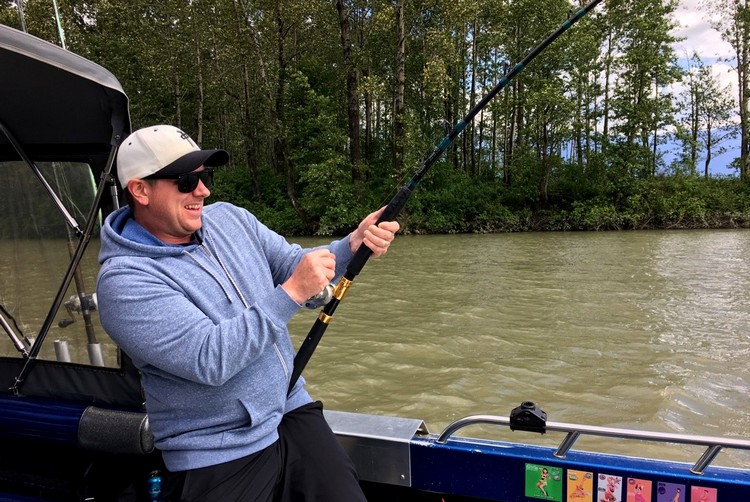 I’m shocked by the strength of this underwater beast. I use all my strength and gain little ground. It feels like a tug-of-war that stuck in a draw. Nobody wins round one.

After only 5 minutes, my arms and legs are shaking.

I had no idea fishing could be so exhausting! I pass the line to my companions and they continue the dance. Two steps forward, one step backward. We gradually wind back the line and feel the fish let up.

Between the three of us, we finally win the battle. The sturgeon rolls over and accepts defeat. The fight was about 20 minutes long, but it felt like an hour. 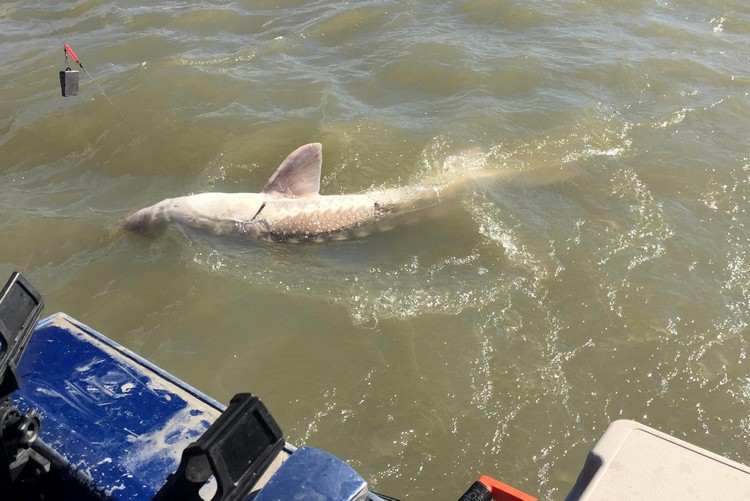 This white sturgeon is far too big and heavy to bring into the boat. Every fisherman wants the perfect photo of the prize catch. But, given it’s size and weight, this is going to be challenging.

Rod looks to the shoreline and has an idea.

We give the line some slack and Rod turns the engine back on. He slowly guides the boat towards the shore. The fish is still on the hook, but it has no fight left in it.

We get within 10 meters of the shore. The river floor is only waist deep in this section. Rod hands our trio some waders to put on. We’re going into the river!

Rod jumps in the water first and grabs the enormous fish. He grips its wide mouth and pulls it close to the boat. The rest of us follow his lead and prepare to enter the frigid water.

Sturgeons do not have teeth, so the mouth is the best part of the fish to get a grip. It is such a strange feeling to put your hand in the mouth of a fish that is bigger than you. Tick that off the ‘ol bucket list! 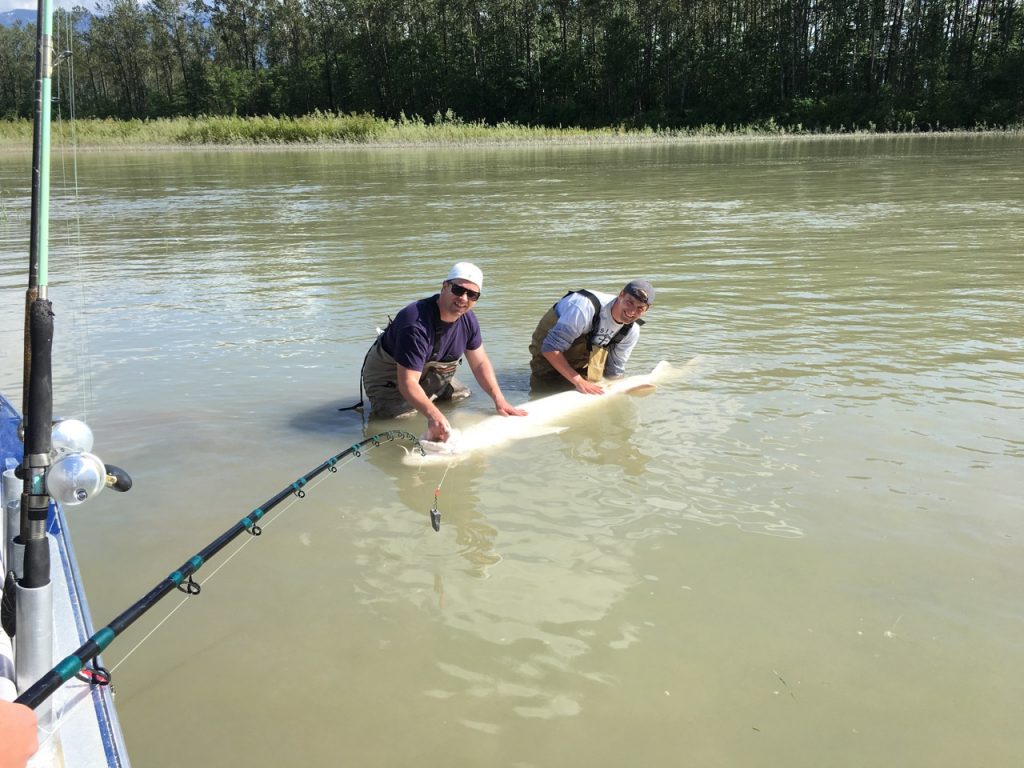 We get a quick photo of two of us – see above – while the third climbs into the water.

Rod unhooks the fish and climbs back into the boat so that he can take the photo. The three of us grab hold of the beast and attempt to flip it over so that we can get THE perfect shot with the scales showing. It looks kind of like a shark when it’s floating on its back.

I get a fierce grip on the mouth and prepare for the flip. Here we go. On the count of three.

Just then, the fish wiggles forward and swats his head against me. Within the blink of an eye, I’m tossed 4 feet behind me right into the river. The power of the fish is overwhelming. It fiercely shakes off the others and breaks free. What the F just happened?!?!

Surprisingly, it doesn’t swim away. He just stares at us from 5 feet away.

Now, I’m not going to lie. I wanted back on the boat immediately. Imagine being in the water with a 9 foot shark or an alligator – that’s where my mind went. We frantically scrambled back on the boat like ungraceful sea lions climbing on a rock. It wasn’t pretty.

While we may have won the battle, the mighty fish got the last laugh by spoiling our perfect photo. 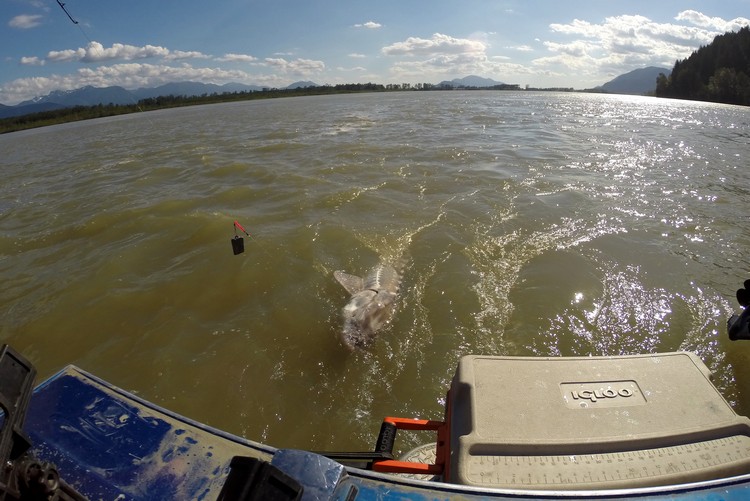 Rod estimates the sturgeon was about 9 feet long & 400 lbs.

He says it was the biggest catch of the season and close to one of the biggest he’s pulled in the Fraser. But I’ll bet you say that to all the boys, don’t you Rod!

We spent about 6 hours on the river and caught 3 sturgeon that day. I would have been happy with just one, so I’ll file this fishing excursion as a huge success. 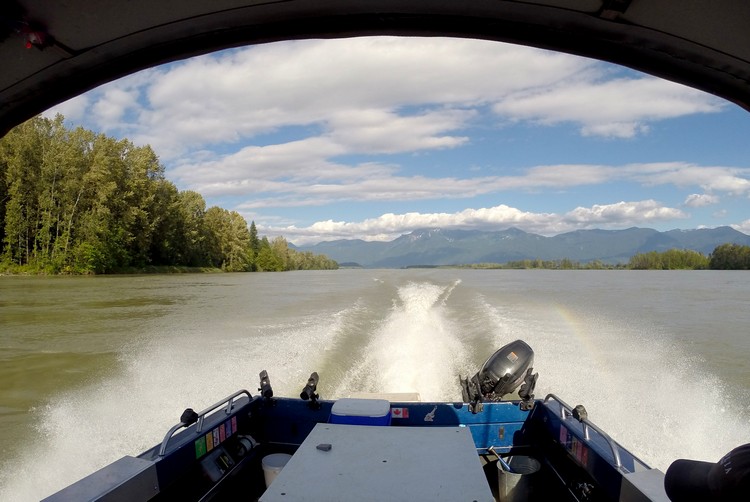 A few things to know before you go:

Have you been Sturgeon Fishing? Where? 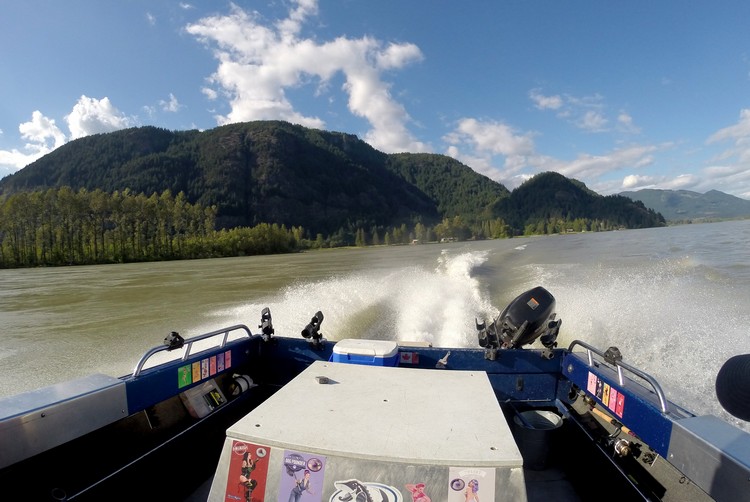 Read next – Photos from our trip to Luxor, Egypt