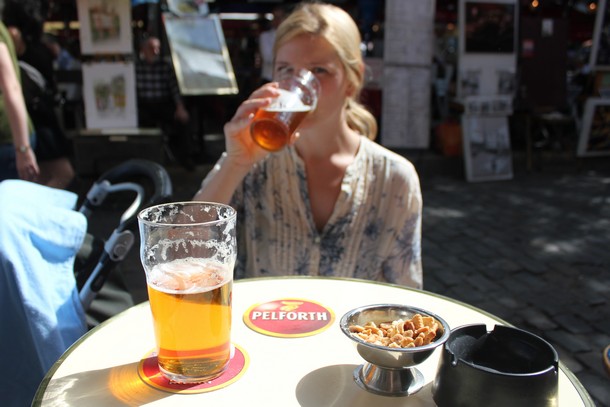 As you can probably imagine, we sampled lots of tasty beer on our recent trip to Europe. As such, this next installment in our popular series about drinking beer around the world showcases beer from our travels to Germany, Liechtenstein, Switzerland and France.

Being lovers of beer and travel, we try our best to capture a photo of every beer we sample while on the road, making for an awesome photo collection with over 450 different types and brands of beer. We sampled these refreshing blonde ales in the artsy Montmartre neighbourhood in Paris. Baby B fell asleep in his stroller so we decided to pull over and grab a table at an outdoor cafe. The warm afternoon sunshine welcomed us and set the tone, so naturally we ordered a healthy portion of Moules-frites and soaked up the Parisian atmosphere. It was a fun afternoon!

The beer verdict – Golden body, malty with decent hops, full bodied with frothy head, very refreshing. We would certainly order again. We give it 7.5 out of 10 The Germans are arguably the world’s best brewmasters, so we made it a point to try a new beer in each place we visited. After spending a few hours strolling around the Romerberg square in Frankfurt, we decided it was time to find an outdoor restaurant and check out some local brew.

Perhaps it was the well advertised “BINDING” logos plastered on every umbrella that captured our attention? Or perhaps it was the smell of warm potato salad and Frankfurter sausages that lured us in? Whatever it was, we thoroughly enjoyed our lazy afternoon in Frankfurt.

The beer verdict – Classic German lager, light and dry with subtle bitterness. Quite enjoyable on a hot summer afternoon. We give it 7.5 out of 10 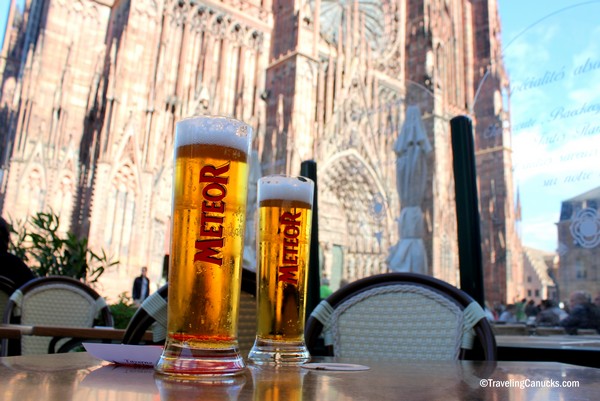 Our necks snapped backwards as we gazed up, higher and higher, until our eyes finally reached its pointy peak. The Cathedral of Our Lady of Strasbourg is said to be the sixth-tallest church in the world, our kinked necks agreed. It’s quite possibly the finest Gothic church in France, making it the perfect backdrop for an afternoon pint.

We’re told that Meteor is one of the largest independent, family run breweries in France and that the hops are sourced locally from the Alsace region, making it a must try while in Strasbourg — so we did!

The beer verdict – Crisp, light and refreshing, but nothing special. We give it 6.5 out of 10 We’ve indulged in many Bitburgers over the years, but rarely in the region it originated. This particular bottle was savored while on a river boat cruise down the beautiful Mosel River Valley, our favourite part of Germany. The river boat slowly floated past age-old villages and steep vineyards that blanket the river valley, delivering the perfect setting for an afternoon beer.

The beer verdict – Light, smooth, malty and bitter. It’s not my favourite German pils but it’s a quality beer. We give it 7 out of 10 We didn’t realize until days later that the Zeughauskeller Restaurant was such an intrinsic part of Zürich. The restaurant was originally built in 1487, making it over 500 years old – think about that for a moment. Canada as a nation is less than 150 years old!

Although it doesn’t offer an extensive beer list, it does serve some tasty local draft beers. If you find yourself in Zurich looking for a popular restaurant that serves traditional food, this place is worth a visit – especially in the summer when it sets up dozens of tables outdoors on a cobblestone road.

The beer verdict – Sweet, well-hopped, solid body with flavourful finish. We give it 8 out of 10 This memorable beer drinking moment comes from Le Petite France, a picturesque neighbourhood in old town Strasbourg that’s separated by canals and filled with cute half-timbered houses. We had a fantastic lunch at ‘Au Pont St Martin’, known for its traditional Alsatian cuisine. We are big fans of escargot but had never eaten it in France, so this was a treat all on its own. The Fischer brewery was founded in 1821 in Strasbourg, so it was an ideal choice given our surroundings.

The beer verdict – Pale golden lager, decent flavour, light and smooth. We give it 7 out of 10 This Lucerne favourite was enjoyed at the top of the world, on the peak of Mount Pilatus almost 7,000 feet above sea level. After taking a boat cruise from old town Lucerne to Alpnachstad, we jumped on the world’s steepest cogwheel railway to the top of Pilatus-Kulm.

Once there, we had lunch at the Pilatus-Kulm outdoor restaurant. The food was okay, but we didn’t travel all that way for the schnitzel – we were there to witness the breathtaking landscapes of the Swiss Alps. You can see more photos here.

The beer verdict – Light, clear, mildly hopped, smooth and refreshing. We give it 7 out of 10 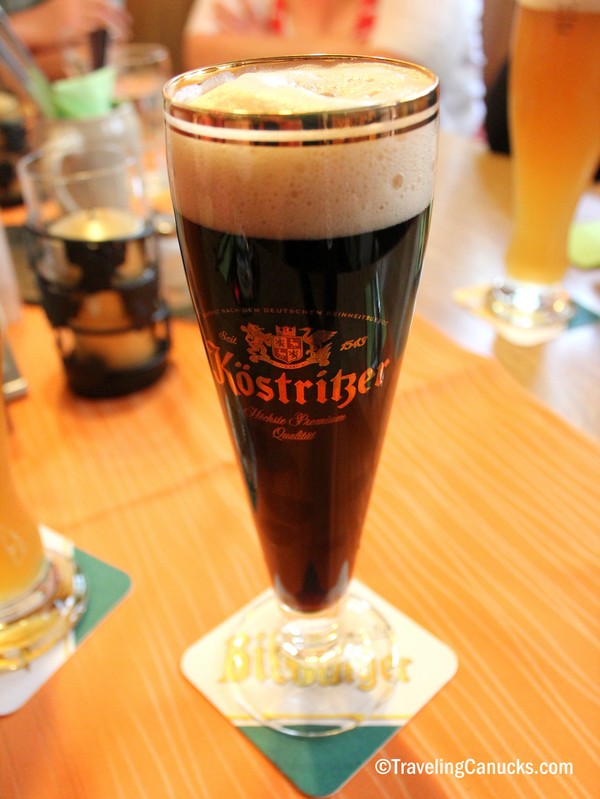 We’ve been digging the darker beers lately, so we were eager to try some German Schwarzbier (black lager) on this recent Euro-trip. The Köstritzer brewery was founded in 1543 and it’s one of the oldest producers of Schwarzbier in Germany – it’s now owned by Bitburger (pictured above). This moment in beer drinking history took place at an old restaurant in Traben-Trarbach, a charming medieval town in the Mosel River Valley.

The beer verdict – Sweet, chocolate and roasted malt flavours, light body (lager based beer, not a heavier ale or stout). We give it 7 out of 10 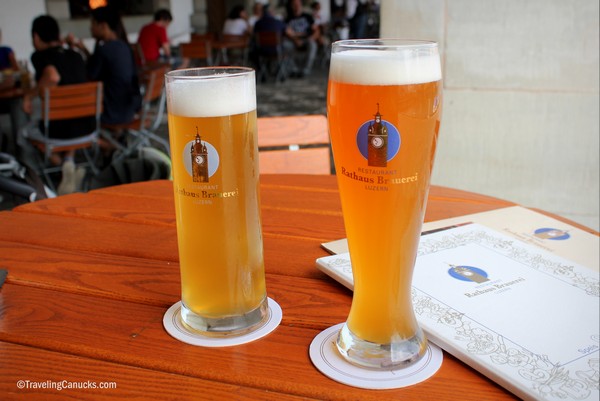 When we reflect back on the many memorable beer drinking moments on this trip to Europe, one that stands out is the Rathaus Brauerei in Old Town Lucerne. The brewery has a fun vibe, located in an old stone building with perfect riverside views of the legendary stone tower and wooden bridge. The beer was fantastic – we tried the weissbier and the seasonal beer – both very good selections for the summer scene.

The beer verdict – The Weissbier was very flavourful, with hints of citrus and banana. The seasonal beer was full-bodied and well hopped. We give them both 9 out of 10 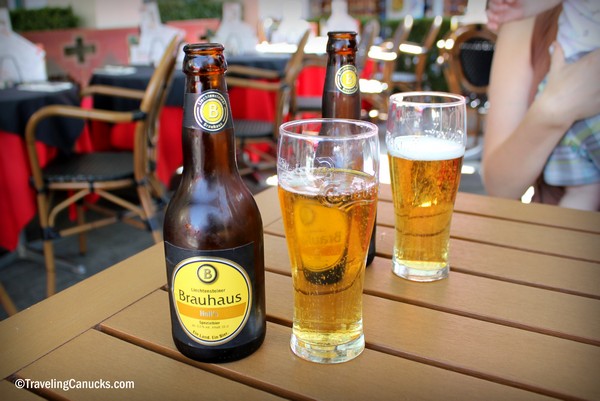 Even though Liechtenstein is one of the world’s smallest countries, we still assumed it would have a locally brewed national beer. However, we were surprised to learn that, up until a few years ago, Liechtensteiner Brauhaus was the first locally brewed beer since the First World War (a drought that lasted 90 years!).

Although Liechtenstein has a tough time competing with the apres ski in Austria and Switzerland, it does have some epic skiing, mountain biking and hiking terrain. Because we had Baby B’s clunky stroller with us on this visit, we opted to skip the outdoor adventure and enjoy a few of pints instead.

The beer verdict – Light body, soft carbonation (no head), mild bitterness with skunky aroma. Worth a try, but nothing special. We give it 6.5 out of 10