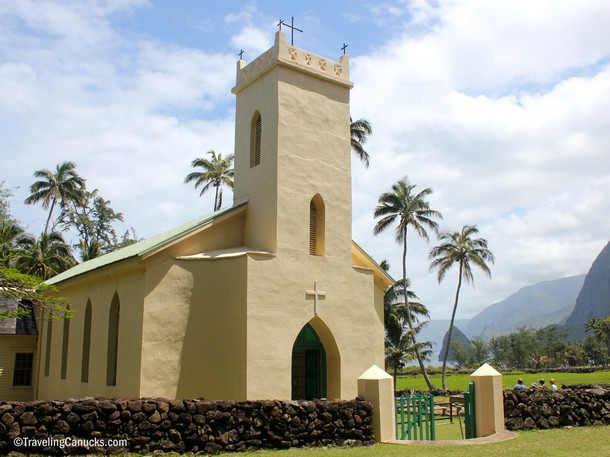 Descending into Kalaupapa’s dark past

Buzzy Sproat has experienced a lot during his time on the remote island of Molokai. The legendary mule trainer has spent the last 40 years guiding visitors down the world’s tallest sea cliffs to the hauntingly beautiful Kalaupapa peninsula.

As we saddled up, Buzzy went through his standard orientation and explained the role of his trusty mules.

“These mules are going to work today,” he said jokingly.

“This is not a democracy, it’s a dictatorship.”

Our group chuckled, fully aware that Buzzy’s intent was to lighten the mood and remind us that his mules are well-trained. Little did he know the irony of his words and the impact they would have on us later that morning. Kalaupapa has a dark history, one that has profoundly shaped the spirit of Molokai.

From 1866 to 1969, the isolated peninsula was the location of a leprosy settlement that housed thousands of suffering men, women and children who were exiled to Molokai and cut off from society.

The towering sea cliffs separate the peninsula from the rest of the island, creating a natural quarantine that pleased the government and fearful Westerners. Hawaiians did not carry the same social stigmas as their Western counterparts, but politics, fear and religion can be powerful tools of influence.

Before a cure for Hansen’s Disease (the appropriate name for the disease) was developed, people were afraid of contracting the terrible disease. The solution, right or wrong, was to banish the afflicted to this secluded settlement.

Essentially sentencing them to a life of solitude and segregation. As we descended the steep switchbacks, Buzzy shared his personal experiences and stories about the town and people of Kalaupapa.

“The people who live here have been through a lot,” he said in a soft, compassionate voice.

“When we get to the town, you can’t take pictures of the residents. They probably won’t come out while we’re here, but if they do, you gotta respect their privacy. This is their home.”

Our curiousity made us uncomfortable.

We boarded the beat-up yellow school bus that waited for us at the base of the trail. Buzzy jumped behind the wheel and drove a few minutes until we reached the church in the center of the quiet, seemingly abandoned town. 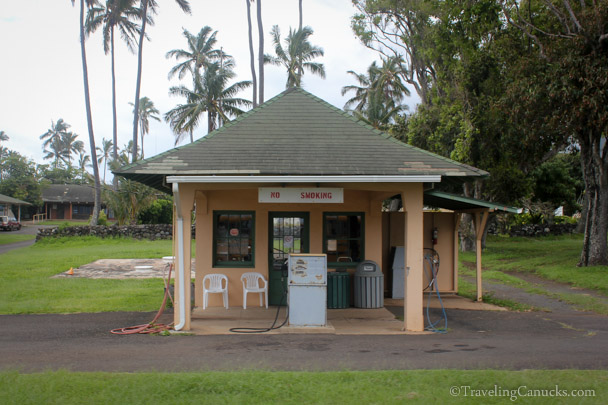 The streets are empty. Not a sole in sight.

“You see that gas station,” said Buzzy. “Once a year the ship comes and they fill it up. They charge the same rate all year until the next shipment arrives.”

He joked, “Now wouldn’t it be nice to have gas prices stay the same all year?!”

Given the size of the town and the limited need for transportation, we assume a full tank of gas goes a long way in Kalaupapa. 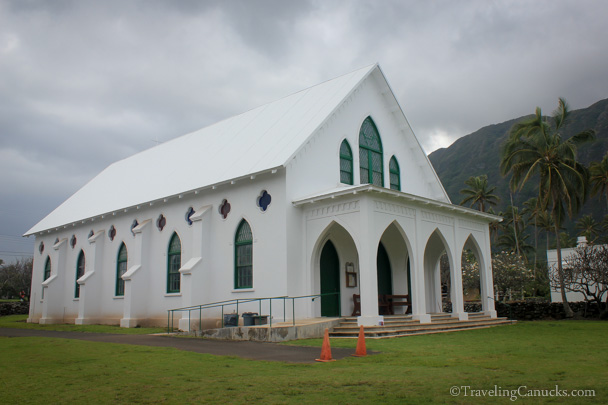 Buzzy escorted our group to the entrance of St. Francis Parish. We were greeted by Father Patrick Killilea, the permanent pastor at the white-washed church located in the heart of town. Father Pat, as he’s known on the island, shared the story of the church and legacy of Father Damien de Veuster, the Catholic missionary from Belgium who ministered and cared for the exiled.

“Damien was more than just a holy man of the church. He was the carpenter, the handyman, the farmer, the administrator, the doctor. He was their leader” said Father Pat proudly.

“There really wasn’t anything here before Damien arrived. He built the church, the hospital. And he gave the residents hope.”

As we listened to Father Pat speak about Damien’s life, we began to understand the importance of his work and the bravery of his commitment to serve the afflicted. Damien’s work was rewarded in October of 2009 when Pope Benedict XVI canonized him and declared him a saint in the Roman Catholic Church.

It’s a powerful story. One that’s deeply rooted in politics, racism, religion, ignorance and fear. One that’s far too complex for this little ‘ol travel blog. As such, we encourage you to read about “Saint Damien and the Colony” or watch the movie “Molokai: The Story Of Father Damien“. 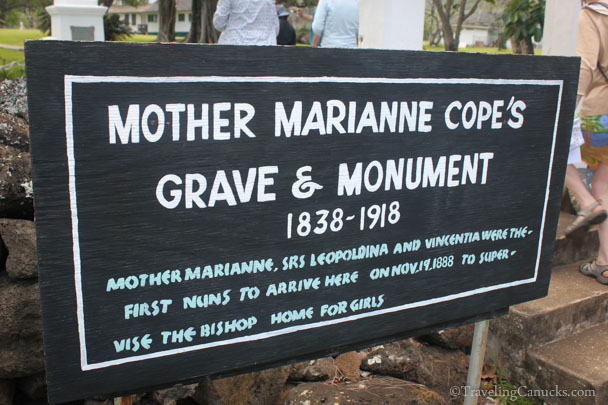 Our sobering tour continued to the grave and monument of Mother Marianne Cope. Mother Marianne relocated to Kalaupapa to care for the deteriorating Father Damien, who had contracted the disease, and take over his work after his passing.

Unlike Damien, Marianne did not contract Hansen’s Disease during her time in Kalaupapa. Her tireless work was also recognized by Pope Benedict XVI and, in October 2012, she was canonized and given the name Saint Marianne of Molokai. 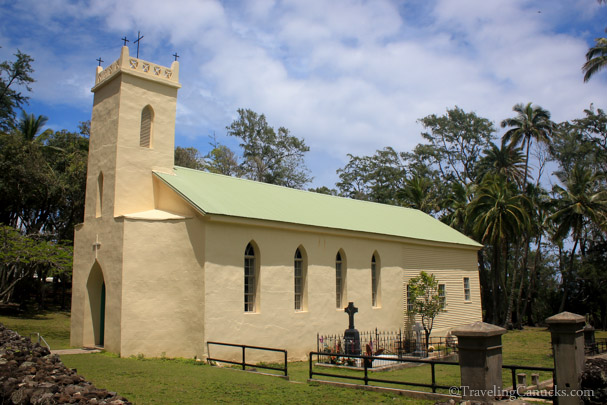 The rickety yellow school bus continued on, bouncing down an unpaved road to the remote community of Kalawao on the eastern side of the peninsula. We stopped at Saint Philomena Roman Catholic Church, a simple but formidable church that was built by Saint Damien. It’s also the location of Saint Damien’s original grave (pictured below).

The church has been refurbished over the years but it’s rarely used for religious purposes. It now stands as a reminder of Damien’s selfless work and acts as a symbol of strength.

As we walked along its creaky wooden floors, we couldn’t help but feel the presence of Kalaupapa’s dark past. It’s not the kind of place you’d want to visit alone at night (insert dramatic horror film music here). 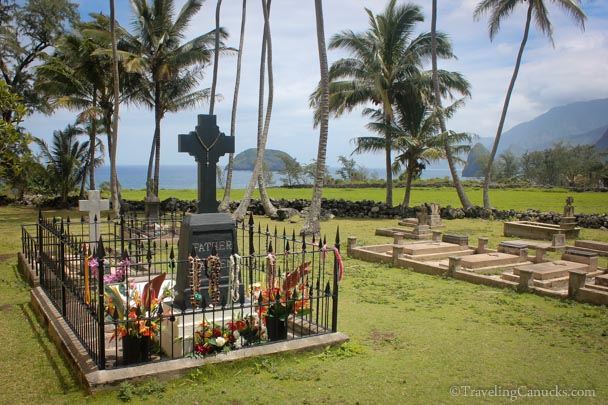 “The way they treated these people was terrible,” said Buzzy. “They wouldn’t even dock the boats. They just pushed them in the water and told them to swim.”

Buzzy pointed to a rocky beach at the foot of the steep sea cliffs.

“That’s where they would swim to shore. It’s hard to believe people could do that, but that’s the way it was back then. Some didn’t make it. Those that did, didn’t make it for very long.”

We were reminded of Buzzy’s earlier statement: This is not a democracy, it’s a dictatorship We sensed that the stories of Kalaupapa’s history still effect Buzzy, even after all these years. He would often slide in a joke to lighten the mood, but his expressions told a different story.

“My mother’s cousin was in the colony. But nobody knew. She got sick and went to the hospital. They said she was sent away to get special treatment. Nobody knew she was here until much later,” he said with a sobering tone.

He closed the door of the yellow bus and headed back to the town. 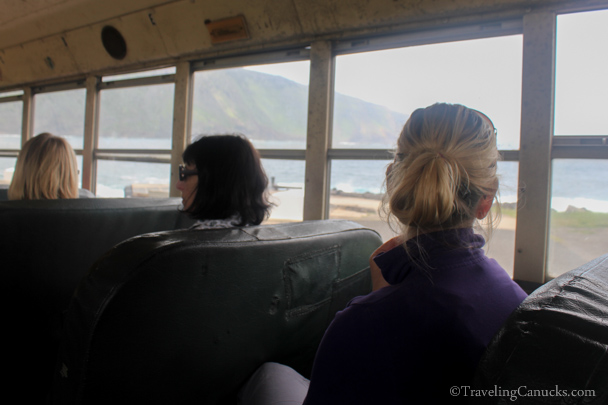 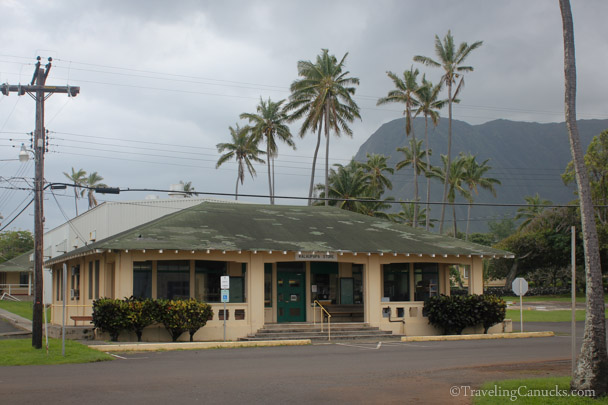 As we puttered through the town, Buzzy pointed at buildings and explained their purpose. The grocery store, the post office, the medical center.

When we approached the former visitors building he pulled the bus over and cut the engine. He wanted to tell us another story but it required his full attention.

“A few years ago, two kids came to this place to visit their mom for the first time,” Buzzy began. “They’re in their 40’s now. But when they were born, their mother had the disease. So the kids were taken away at birth. They never met her. And she never met them. Until that day.”

He pointed to the visitor’s room, the location of this tearful reunion. “She was not allowed to contact her kids. They were taken away from her so that they could have a better life”.

We empathized and were once again reminded of Buzzy’s earlier statement: “This is not a democracy, it’s a dictatorship.” 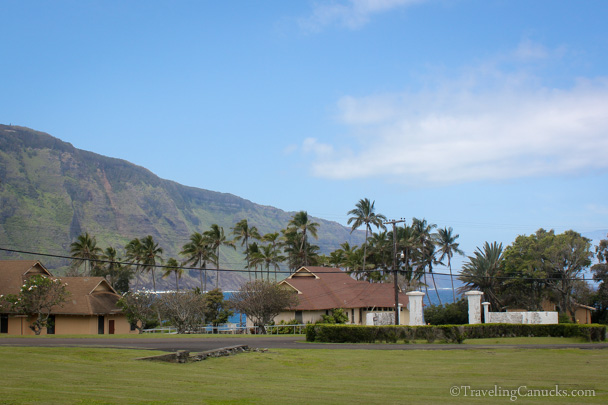 Effective treatment of Hansen’s disease was discovered in the 1940’s. This lead to further development of a cure and subsequently the patients of Kalaupapa were allowed to leave the settlement and return to their homes. Many residents left the community but a few elderly survivors have remained.

Kalaupapa National Historical Park, a National Historic Landmark in the United States, was established in 1980 to preserve the cultural and physical settings of the two leper colonies (Kalawao and Kalaupapa) and to educate future generations.

Travel tip – To visit the Kalaupapa peninsula you must take a tour. We took the Molokai Mule Tour (read about our experience here). You don’t have to take the mule tour, you can also catch a short flight or hike the trail, but you must be accompanied by a guide.

Read more from our trip to Molokai:

Special thank you to Buzzy and the good people at the Molokai Visitors Bureau for the complimentary Molokai Mule Tour. As always, opinions shared are entirely our own. We think every visitor to Molokai should take a trip to the Kalaupapa Peninsula and learn about its history.