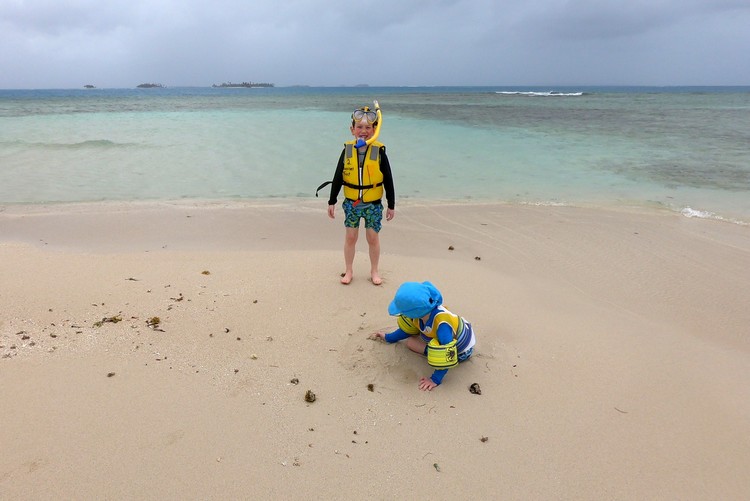 So much has changed in such a short period of time. We haven’t felt motivated to write about travel, for obvious reasons, which is why it’s been a little quiet over here.

We’re doing okay. Like you, we’re adjusting to the new normal. We’ve experienced a wide range of emotions, from fear and anxiety to gratitude and hope. It’s a lot to digest.

Working from home has been challenging. We are not ‘work from home’ people, so it’s been a big adjustment for us. We don’t have a dedicated home office, so the kitchen table has become Cameron’s desk and the dining room has become Nicole’s makeshift office. It’s not ideal, but we’re making it work.

Last night, we were talking about our trip to Panama in February.

Prior to departing, the coronavirus was spreading through China, Japan and South Korea. We watched the news and stayed informed, but we didn’t take the virus seriously. The Canadian government sent repatriation planes to Wuhan to bring stranded Canadians home. The virus was big news, but, because it had not yet reached North America, the thought of canceling our trip to Panama had not crossed our minds.

When we arrived at Tocumen International Airport in Panama City, we were greeted by airport staff with temperature guns. Each passenger had to get their temperature checked before entering the airport.

This was the first time I’ve had my temperature taken at an airport.

I remember feeling like it was unnecessary, but understood the extra precautions given that the virus was spreading on the other side of the world. After that brief moment at the airport, we forgot all about the coronavirus. We had arrived in Panama and were excited to start our family adventure. 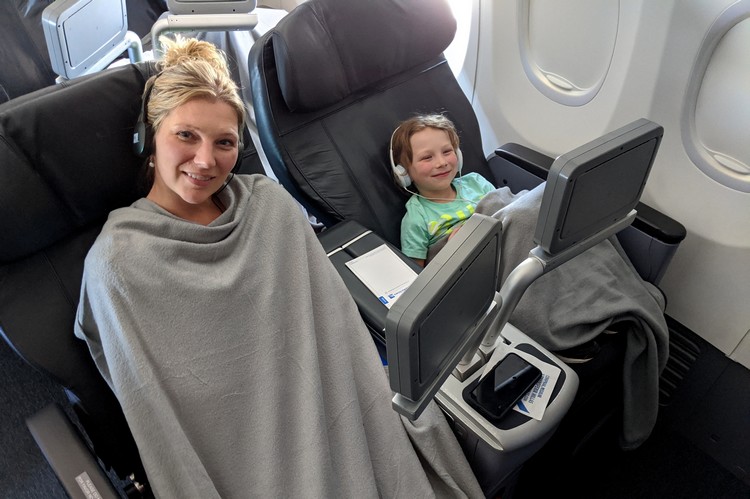 Our flight to Panama City was overnight, so we arrived at 10:00 AM. After a short nap in our hotel room, we spent the afternoon at the rooftop pool. We ate dinner at the hotel restaurant and went to bed at a reasonable hour.

We prefer to take it slow on the first day in a new country, especially after a redeye flight.

He said he felt sick, like he was going to throw up. We rushed him to the bathroom and he dry heaved for a few minutes. But nothing came up. He was hot and clammy. His cheeks were bright red and he was sweating.

It’s not uncommon for Braydon to get sick when we travel. And, if he’s going to get sick, it’s usually at the beginning of the trip (particularly if we’ve been on an airplane). Because of this, we come prepared with children’s Advil and Tylenol. We gave him some Advil, changed his clothes and he climbed into bed with us. It wasn’t a great sleep, but we thought the worst was behind us.

The plan for the next day was to explore the Casco Viejo neighbourhood in Panama City.

Braydon felt warm in the morning, so we gave him another dose of Advil. He was in good spirits but it was evident that he was not feeling well. I went to a  pharmacy and purchased a thermometer so we could monitor his temperature (this experience has taught us to always bring a thermometer!).

By late afternoon, his fever had reached 102 degrees. Not good.

We rotated Advil and Tylenol throughout the day and it worked, bringing his temperature back to 98 degrees. He had mild headaches and his body ached, but no vomiting, coughing, sneezing or diarrhea.

I feel it’s important to note, for perspective, that at no point did we consider that Braydon may have contracted the coronavirus.

That’s how far we’ve come since mid-February. Here we are, in a foreign country, with a boy who has a 103 degree fever, and coronavirus doesn’t cross our minds. 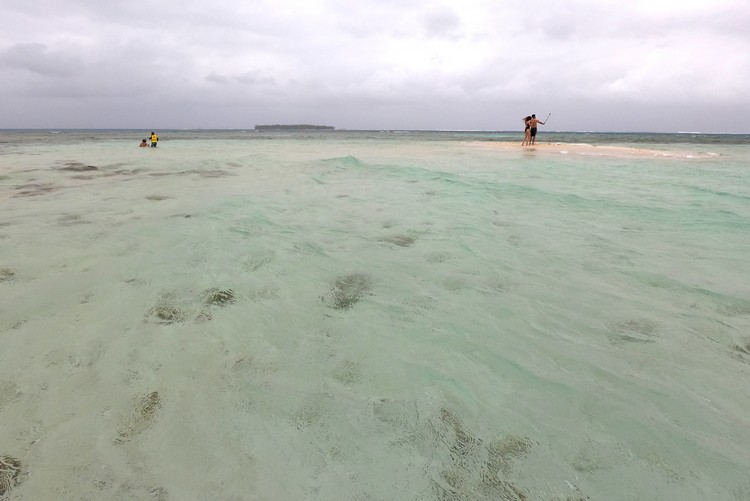 Above – a small sand bar island in the middle of the sea. 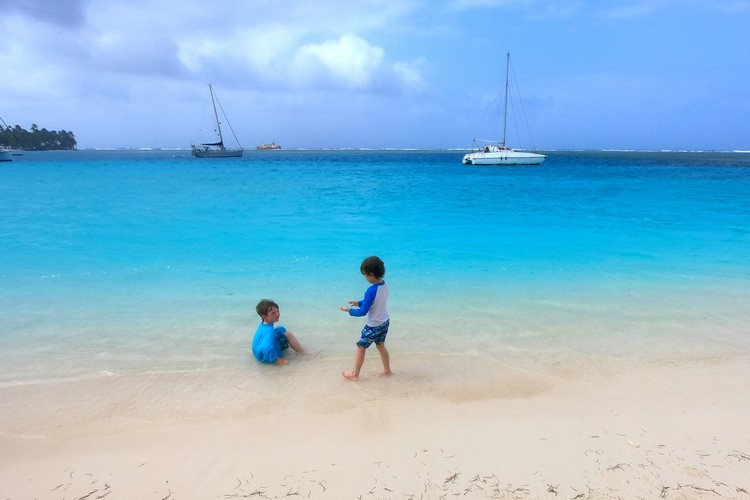 We had a big decision to make.

The next morning, at 5:30 AM, we were to start the journey from Panama City to the remote San Blas Islands. These islands are not easy to get to, so we were concerned about the trip.

What makes the San Blas Islands unique is that visitors can stay in rustic cabins on tiny remote islands. Some of the islands are only 200 feet in diameter, so they actually look like the deserted palm tree islands you see in cartoons.

Now, when I say rustic, I mean four wooden walls with a tin roof. No electricity, no running water, no bathroom. Basically, a square box with beds and pillows.

Our concern was that if Braydon’s fever kept climbing, we would be in the middle of nowhere; literally. If he needed medical attention, that would be very difficult. And, with no running water or electricity, it would be hard to cool him down if the medicine didn’t work.

Visiting the San Blas Islands was the focal point for this trip to Panama, so we would be very disappointed if we had to cancel.

Ultimately, as you can see by the photos, we decided to continue with our plans to visit the islands. Above – enjoying the views from our private cabin on Yanis Island. 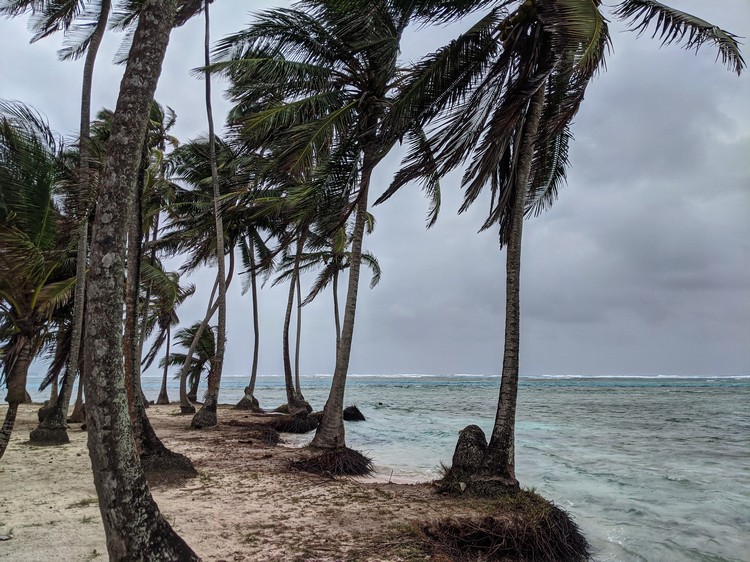 Unfortunately, the weather was not great during our visit.

The forecast for the 3 days was heavy wind, thick clouds and rain. And, a big storm was expected to hit the islands on the day of our departure.

The one hour boat ride from the mainland to Yanis Island was not enjoyable. The waves were really big and the small boat consistently crashed hard on the water, drenching everyone repeatedly. We dreaded the thought of returning to the mainland during a big storm.

We enjoyed our time on the island. Our accommodations were very basic, but that was the goal.

Braydon was fine during the day. We visited a few other islands and he even went snorkeling in the ocean for the first time (see the first photo at the top of this post).

During the night, however, Braydon’s continued to bounce between 101 and 103 degrees. He wasn’t improving and we feared his fever would get worse.

Did we make the right decision? Should we return to Panama City?

The San Blas Islands are beautiful and definitely worth visiting. But, we were constantly stressing about Braydon’s fever and we couldn’t relax.

The poor weather was a blessing in disguise. Had it been hot and sunny, it might have pushed his fever even higher. And, with a big storm approaching, it made the decision to leave much easier.

So, that’s what we did. We returned to Panama City after only one night on the island.

Logistically, changing travel plans is not an easy task in the San Blas Islands. After several phone calls, the host on Yanis Island was able to make arrangements for us to join a group that was returning to Panama City later that afternoon.

We were thankful and appreciative, but also disappointed to leave the island so soon.

It was the right decision.

Thankfully, Braydon’s fever broke on day four, when were back in Panama City at a nice hotel. If it didn’t break when it did, we would have to visit a medical clinic or hospital, which would not be ideal.

The day his fever broke, Nicole started developing a fever and a bad cough. Her fever was not as severe, reaching as high as 101 degrees, and it only lasted two days. Her cough, however, persisted for weeks after returning home.

Connor and Cameron did not experience any illness or fever on this trip. 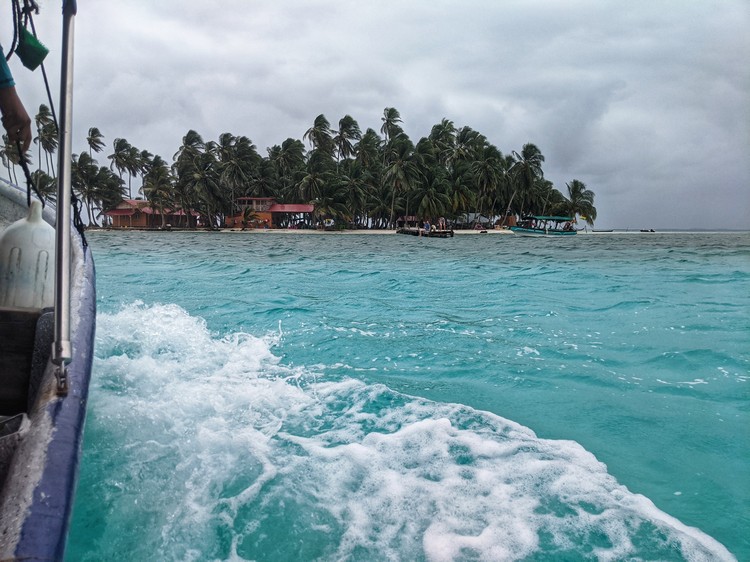 Above – approaching Yanis Island in the San Blas Islands. Look at that water! 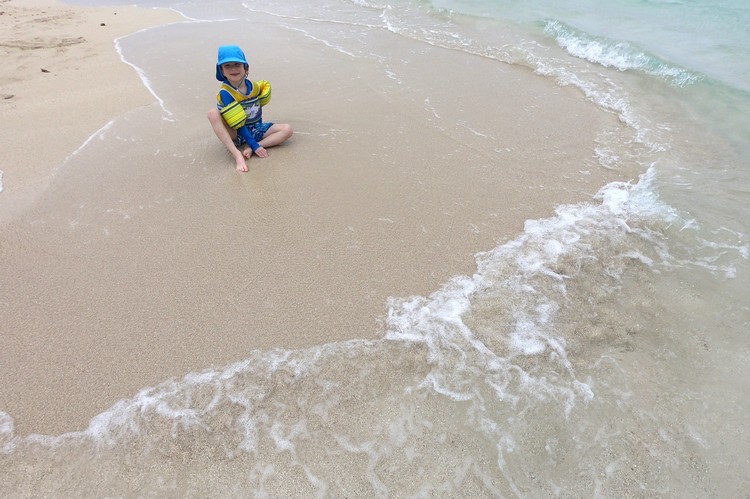 On the drive from Panama City to the Caribbean coast, we shared the 4×4 jeep with a couple from Belgium. They had been in Panama for a month and were returning home after this trip to San Blas.

The woman, who is a nurse by profession, informed us that she had also contracted a fever for four days upon arrival, similar to Braydon. She believes she picked up a bug from the airplane, which is probable.

Thinking back to our conversations about this mystery fever, not once did we consider it was coronavirus.

This would have happened on February 15. Less than one month later, the World Health Organization declares COVID-19 a global pandemic.

You know what happens next. After self isolating at home for over a month, with very little interaction with people, Braydon mysteriously caught yet another fever. We continue to practice physical distancing, and only venture outside for groceries and the occasional walk around the neighbourhood, so this fever was highly unexpected.

Where did it come from? How did he get it?

The fever lasted about 3 days. Fortunately, it did not get as high as in Panama. He had no other symptoms but we were advised to have him tested for COVID-19, which we did. Thankfully, his results were negative.

Nobody else in our house had a fever or any signs of illness. We spend about 90% of our time at home together, inside. So, how did he catch this mystery fever?

There have been cases in kids where they show re-occurring symptoms one or two months after getting COVID-19. Could this mystery fever have been COVID-19?

When Canada starts to offer an antibody test, we’d like to get tested so we can find out we had it or not. Until then, we’ll keep washing our hands and focusing on the positive.

Read more posts from our trip to Panama:

Have you had a fever or illness when traveling abroad?